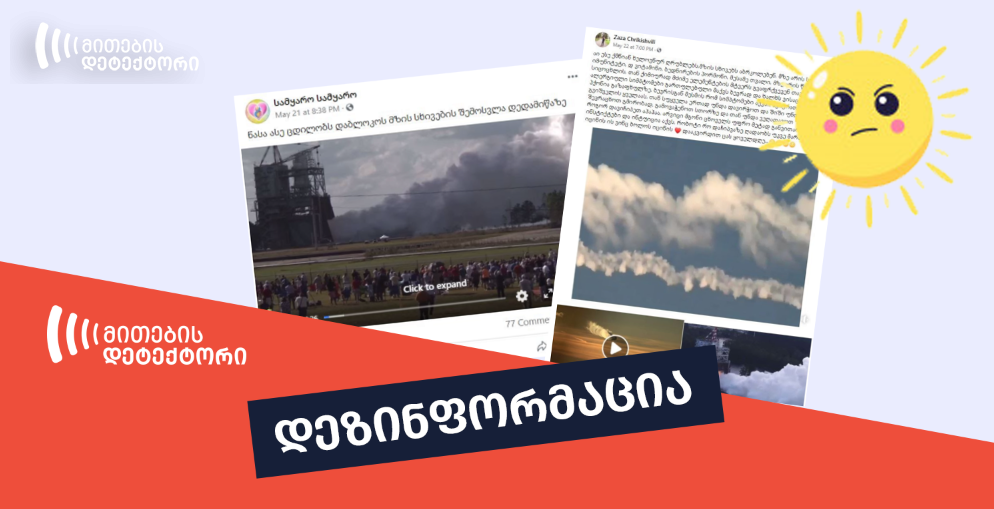 On May 21, a Facebook account სამყარო სამყარო (World World) published a video, with a description saying “This is how NASA tries to block sun rays entering the Earth”. As of May 25, the post had 182 shares. On May 22, another Facebook user Zaza Chrikishvili published the same video together with two other videos. He claims that the videos show a creation of artificial clouds that block sun rays and emit chemically heavy elements. The author of the post also connects the videos to worsening of allergic symptoms and expresses skepticism towards vaccines. 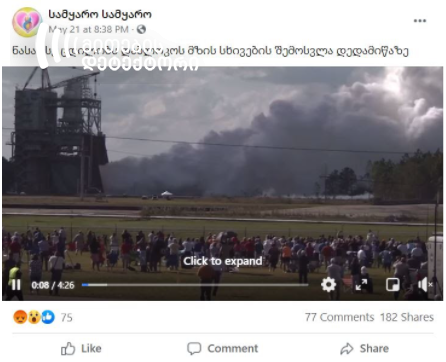 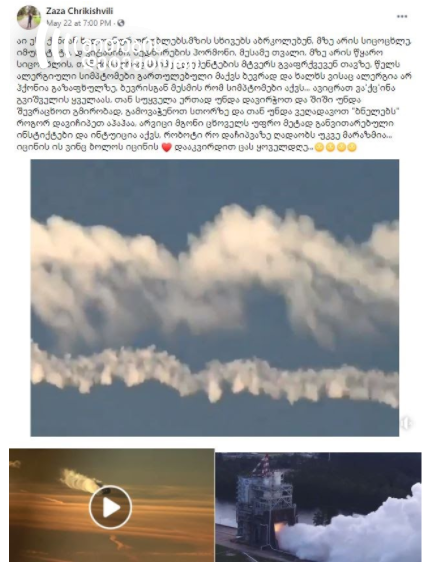 The posts by the two Facebook users include disinformation. In fact, the video shows a test of a rocket engine, not the sunlight-blocking technology created by NASA.

The video shows a test system of rocket engines at NASA space center in Mississippi, United States. Testing the engines is one of the most important stages prior to launching the rocket to space. The engine combusts liquid hydrogen and oxygen, emitting water vapor. The vapor, or the cloud, then returns to the Earth as rain. It does not contain any chemical elements apart from water vapor. BBC’s Top Gear aired a report about this process in 2010. A full version of the video explains the process of testing the rocket engines. The video has been used by conspiracy theorists several times as an “evidence” that NASA tries to control weather. Later, a shorter version of the video, was also disseminated without a context – it was used as a “proof” that NASA tries to play God, creates artificial clouds, and tries to control weather.

In 2017, NASA carried out a wide-scale test of a rocket engine, which was followed by a new wave of conspiracies. The video, shared by the Georgian users, shows exactly this test. Forbes also wrote an article about these conspiracies. In this article, a NASA meteorologist and the Chair of NASA Earth Science Advisory Committee explains what exactly is shown in the video and how NASA space rocket engines work.

Similar disinformation has also been disseminated via Indian social networks and has been fact-checked by the Times of India.

The two other videos, published by Zaza Chrikishvili, show trails left by planes. The conspiracy theory that planes emit hazardous substances has been disseminated in Georgian social network in the past too. Read more on this topic in an article by Myth Detector: