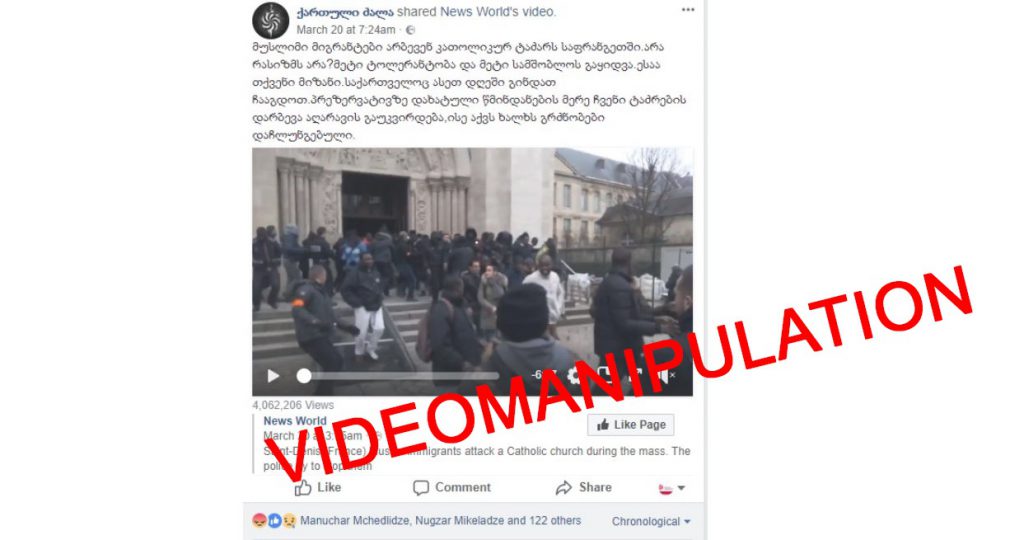 On March 20, a nationalist Facebook page Kartuli Dzala (Georgian Force) released News World’s video, which, according to its authors, shows a group of Muslim immigrants attacking a Catholic church in France during the mass. The video, which has been shared 93 times as of March 27, triggered xenophobic comments and hate speech in the social media. The video footage and its description disseminated by Georgian Force and News World is manipulative, because it does not show Muslim migrants “attacking” a Catholic church. The footage actually shows a rally of about 80 persons, who gathered outside the Diocese of Saint-Denis on March 18, 2018 to protest against the new bill initiated by the French government, making life far more difficult for immigrants and those seeking refuge in France. The Diocese of Saint-Denis is famous for its tolerance towards migrants. Therefore, the protesters chose it for holding a rally. The mass was not in session during the incident. The Deacon of the Diocese said that he shared the migrants’ protest.

According to Snopes.com, an online fact-checking website, News World’s video documents a real event that took place in France on March 18, 2018. In particular, it shows not an attack of Muslim migrants, but a protest of about 80 persons outside the Diocese of Saint-Denis, who were criticizing the French government for initiating the bill making life far more difficult for immigrants and those seeking refuge in France.

News World made its own conclusions about the protesters’ religion and ethnicity, as well as attacking a church by them. It should be noted that the mass was not in session during the rally, which lasted for an hour and ended after police interference.

La Croix, an independent Catholic news outlet, explained that this group likely chose the Basilica of Saint-Denis as the location for this protest as the church has historically provided aid and services to refugees and asylum-seekers. In 2002, for instance, they took in more than 130 refugees as they awaited processing. Moreover, the Deacon of the Diocese of Saint-Denis says that he agrees with protesters that the new bill would make life far more difficult for immigrants and those seeking refuge in France:

Father Jean-Yves Leroy, Deacon of the Diocese of Saint-Denis: “The proposed law will make things even harder.”