Did the WHO and Bilderberg Group Create a Vaccine for Infertility? 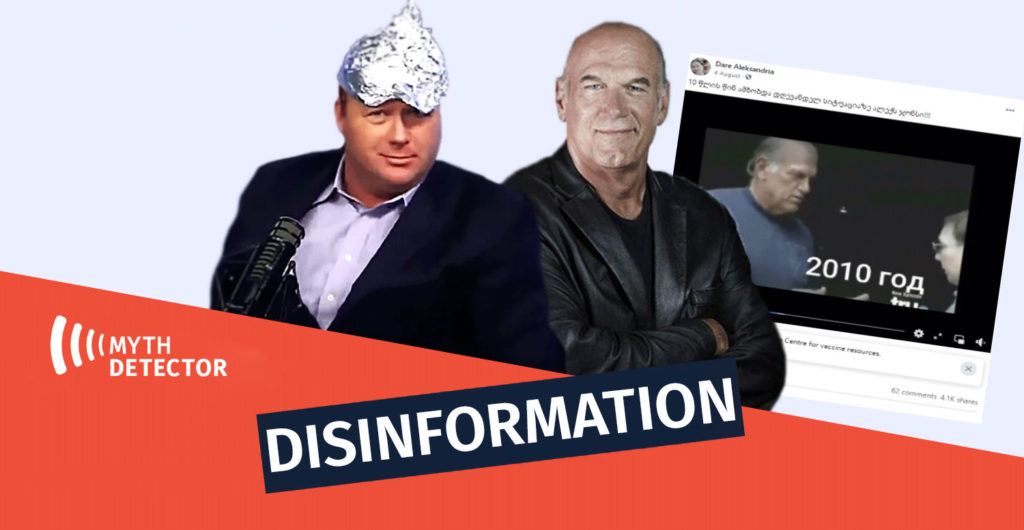 On August 4th, 2021, the Facebook user Dare Aleksandria published a video recorded in 2010, claiming that Alex Jones warns the population about the coronavirus pandemic. In the video, American celebrity TV host Jesse Ventura, famous conspiracy theorist Alex Jones and Dr Rima Laibow discuss the topic of the Bilderberg Group and reducing the world population. Jones claims that the Bilderberg Group has an ongoing depopulation plan, which aims to use vaccination as a primary tool to reduce the world population by 90 per cent. The same is being confirmed by Dr Rima Laibow, adding that since the 1970s, the group has been working to develop vaccines that would cause mass infertility.

Laibow also proclaims that the vaccines authorized by the FDA contain the hazardous chemical substance Squalene, a trigger for several auto-immune diseases, leading to a suffering death. In addition, Laibow argues that the swine flu vaccine will soon be mandatory for everyone in the U.S., and instead of the actual vaccine, patients will be receiving live viruses along with the substance squalene. According to Laibow, this plan was revealed to her in 2003 by one of the country leaders. 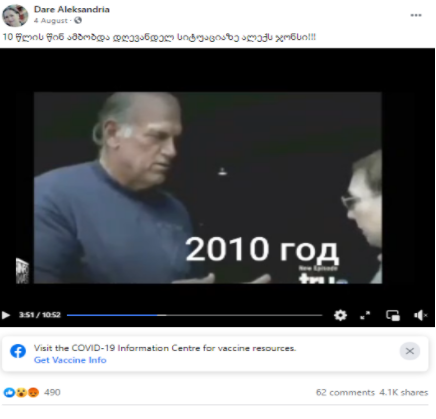 The video contains disinformation and conspiracy theories. The ingredient ‘Squalene,’ included in the FDA-licensed vaccines, is safe, and it does not cause auto-immune diseases and/or death. The claim that vaccination was mandatory in the United States during the swine flu pandemic and that the live viruses were injected into humans, and in some cases, people were given the substance Squalene instead of the actual vaccine, is also false. The assumption that the World Health Organization produces infertility-causing vaccines to reduce the population by 90% is invalid. In fact, WHO has been working on contraceptives in the form of injections, and the claim that WHO wants to reduce the population is a conspiracy theory. Finally, allegations about the Bilderbergs Club are also conspiracies.

The video disseminated on social media represents a fragment from the December 30th, 2009, episode of the American TV show “Conspiracy Theories with Jesse Ventura.” The episode concerned the existing conspiracies about secret organizations, depopulation plans and vaccines. The episode became viral in 2020 and 2021 and was labelled as a prophecy of the coronavirus pandemic and the mandatory vaccination. Nonetheless, the video was created in the context of the swine flu pandemic in 2008-2009 and had nothing to do with the coronavirus.

Squalene is a substance found in humans, animals and plants and is an integral part of various hormones. In the production of vaccines, the emulsion of Squalene is being utilized, mainly obtained from shark liver, and it is used as an adjuvant (to enhance the immunogenicity of antibodies). The squalene-based adjuvants can be found in several FDA-licensed vaccines, such as  H5NA (Chicken Flu) and H1N1 (Swine Flu) vaccines. In addition, squalene adjuvants are contained by several other swine flu vaccines licensed by the WHO and the European Medicines Agency (EMA). Vaccines use adjuvants to elicit a robust immune response. For example, compared to other vaccines, squalene-based adjuvant vaccines usually do not have an increased risk of causing autoimmune diseases and other serious side effects, including mortality. It is true that vaccines containing squalene adjuvant cause more potent local side effects (injection site pain, temporary fever, itching, etc.), but they do not increase the risk of dangerous systemic side effects, and the use of squalene-based adjuvants is safe for health.

It should be noted that various adjuvants are used in vaccines against the coronavirus; however, neither the fully authorized vaccines nor emergency-authorized ones contain adjuvants based on squalene.

Not to mention, no open-source confirms Dr Labow’s prediction about Americans being vaccinated with live viruses or squalene being injected instead of the actual vaccines.

In 1972, the World Health Organization composed a specific working group to support studies on vaccines regulating fertility. However, the goal of these studies was not to create means of mass sterilization but to develop an effective contraceptive available in the form of an injection. It is noteworthy that studies of these types of vaccines were preceded by the invention and refinement of women’s reproductive health and rights movements in the 1960s, as well as other widely used contraceptives (such as oral contraceptives). According to a report by the World Health Organization, the development of a fertility vaccine has become relevant not because of “mass sterilization” but because of the lack of knowledge about the long-term side effects of contraceptive pills on women’s reproductive health.

It is noteworthy that currently, vaccines are not included in the list of contraceptives recommended by the World Health Organization. However, there are several contraceptives in the world market licensed by the WHO, which can prevent unwanted pregnancies for several months, none of them causing permanent sterility. In addition, there is no evidence that the coronavirus vaccines licensed by the World Health Organization cause infertility in humans.

For more information about the disseminated claims about the alleged effect of the coronavirus vaccines on reproductive health, see the articles of the “Myth Detector:”

The allegation that the World Health Organization aims to reduce the number of people on earth is a conspiracy theory and has circulated on social media many times. Read more about the materials prepared by “Myth Detector” on this topic:

The “Bilderberg Club” is an annual conference founded in 1954 with the initial aim to promote dialogue between Europe and North America and prevent World War III. Today, trade, modern technologies, monetary policy, investments, international security challenges or environmental issues are the primary topics on the conference agenda. The agenda of the meetings and the list of participants are available on the official website of Bilderberg Club. For more information about the conspiracies around the Bilderberg Club, see the Myth Detector article:  What is the Bilderberg Meeting and who fabricated Rockefeller’s quote?

Another popular conspiracy theory, claiming that the world’s elites are trying to reduce the planet’s population, was often spread during the coronavirus pandemic. For more on depopulation conspiracy theories, see the articles:

Jesse Ventura is a former governor of Minnesota and an American TV host. In 2009-2012, Ventura hosted a show for the American channel TruTV, gathering “evidence” of various popular conspiracy theories. One of the 2012 Ventura show “Police State” episodes turned out to be particularly controversial. In the show, Ventura argued that the complex of buildings controlled by the U.S. Federal Emergency Management Agency across the United States, which are temporary shelters for victims of environmental disasters, was preparatory camps for introducing military rule in the United States. After the episode, senators and other officials accused Ventura and the broadcaster of spreading fake news and misleading the audience. The show was soon cancelled due to intense criticism.

Dr Rima Laibow, who talks about vaccines and squalene in Jesse Ventura’s 2009 show, is also a conspiracy theorist whose organization ‘The Natural Solutions Foundation’ has been selling unlicensed drugs in the United States at various times. In 2014, Laibow distributed the drug “Nano-silver” by a fraudulent scheme, claiming that the drug could cure the Ebola virus. In 2014, the FDA issued several warning letters to Laibow for advertising unlicensed drugs. In early 2020, Laibow began selling the “medicine” of the coronavirus. Laibow argued that the same drug she was taking to cure the Ebola virus was curing the coronavirus this time around. On June 2nd, 2020, the FDA released another warning letter to her organization, stating that it was promoting a counterfeit coronavirus treatment method.

Alex Jones, who spoke to Ventura about the ‘Bilderberg Club’ at the beginning of the video, is an American far-right radio host and owner of infowars.com. InfoWars has been restricted by Twitter, Facebook, Youtube, and other social media platforms several times for spreading disinformation and conspiracy theories. Jones then created the portal banned.videos, which featured a number of disinformation videos about the coronavirus and Covid-19 vaccines.

At various times Alex Jones has spread conspiracy theories about vaccines, the Illuminati, the 9/11 attacks, and other high-profile events. A few years ago, Jones’ show even claimed that Michelle Obama, the wife of former U.S. President Barack Obama, is a transgender woman.  For more details, see the “Myth Detector” article: How Michelle Obama’s dress became a source for conspiracies?