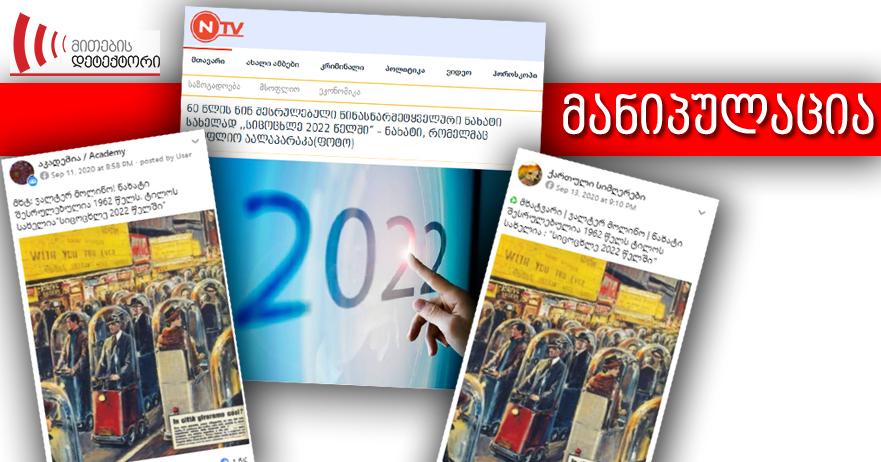 On September 25, clickbait webpage ntv.ge disseminated information with the title “Prophetic drawing called “Life in 2022” that was made 60 years ago – the drawing that the world is talking about (photo)”. Ntv.ge relies on the drawing that singer Khatia Tsereteli published on social network and which belongs to Italian painter Walter Molino depicting people moving around in a single isolated transport. Information emphasizes the prophetic context of the drawing based on singer Khatia Tsereteli’s Facebook post, according to which the name of the 1962 canvas is “Life in 2022”. 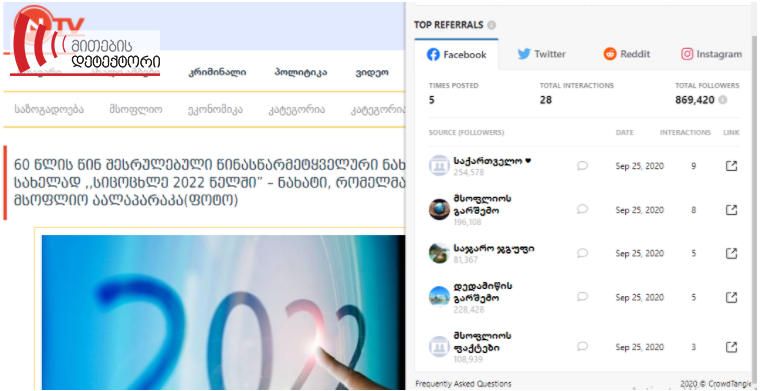 Mentioned information was shared in various groups, and in addition, disseminated through individual posts as well. Some Facebook pages published the drawing only with the author and the date, whereas some posts are titled “Life in 2022”.  Facebook users perceived the drawing to be the prophecy of coronavirus pandemic. Later, News platforms published the drawing with an identical interpretation.

As of September 30, 11:30, 11-13 September posts of the public groups აკადემია/Academy (Academy/Academy) and ქართული სიმღერები (Georgian Songs) have the highest engagement. Post from აკადემია/Academy (Academy/Academy) was shared by 1600 users, whereas the post of ქართული სიმღერები (Georgian Songs) has 744 shares. 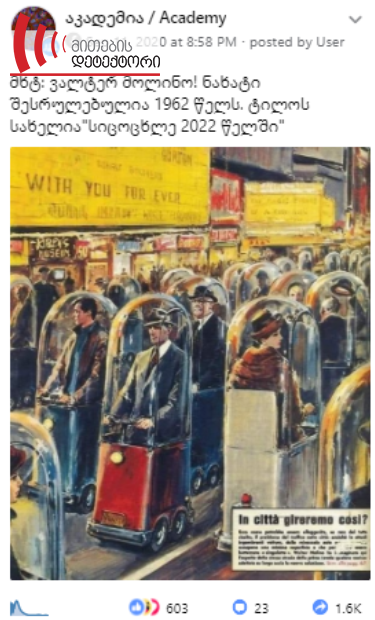 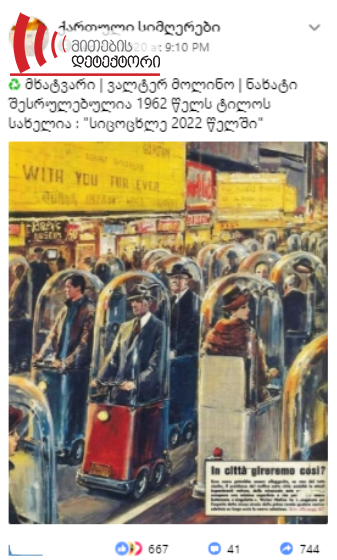 Drawing’s dissemination by online outlets and social media accounts was mainly manipulative resulting in false perception. The original drawing, published by Italian magazine La Domenica del Corriere in 1962 is not titled “Life in 2022”. Moreover, the drawing isn’t linked to predicting pandemic, because it actually addresses the traffic congestion problem.

Verification of the drawing revealed that Italian caricaturist and painter Walter Molino’s drawing was published on the last page of the December 14 issue of Italian Magazine “Domenica del Corriere” in 1962. Drawing addresses traffic problems in the cities. The painter considers mini-scooters as depicted in the drawing to be means to solve the problem. That’s what the Italian inscription in a rectangle on the bottom right of the drawing says. The original inscription of the drawing does not have “Life in 2022” in the title as it was disseminated on the social network.

Early dissemination of the drawing