Can Vaccinated Individuals be Identified with Bluetooth? 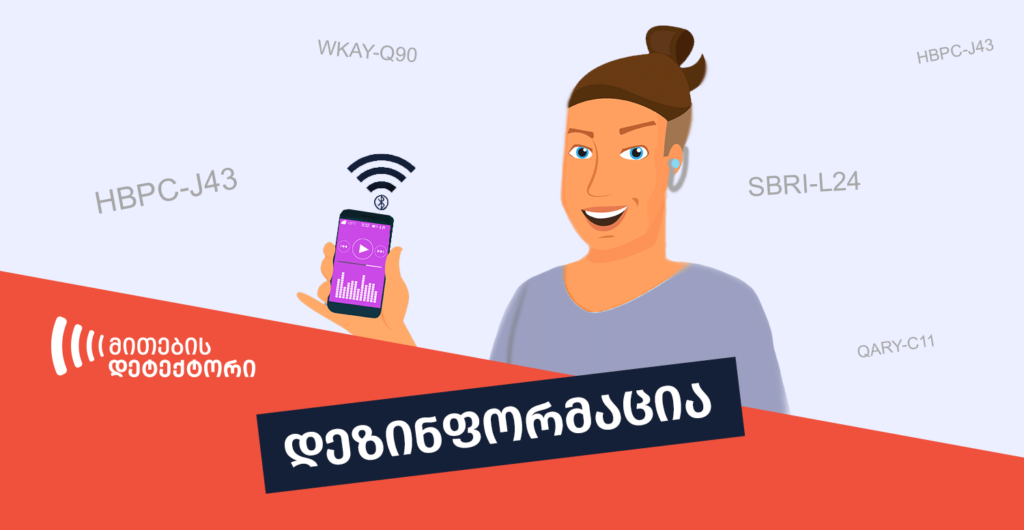 Videos about Bluetooth being able to discover vaccinated individuals have been circulating on Georgian social networks. Identical videos, disseminated on 3rd and 9th of June by Facebook users “სამყარო სამყარო” (Samkaro Samkaro) and Lasha Menteshashvili, depict Russian-speaking woman moving around the various crowded spaces in the city with a phone that has Bluetooth enabled, while the screen periodically shows 12-number code. The authors of the posts claim that these codes belong to the vaccinated people and therefore, they can be recognized with Bluetooth. 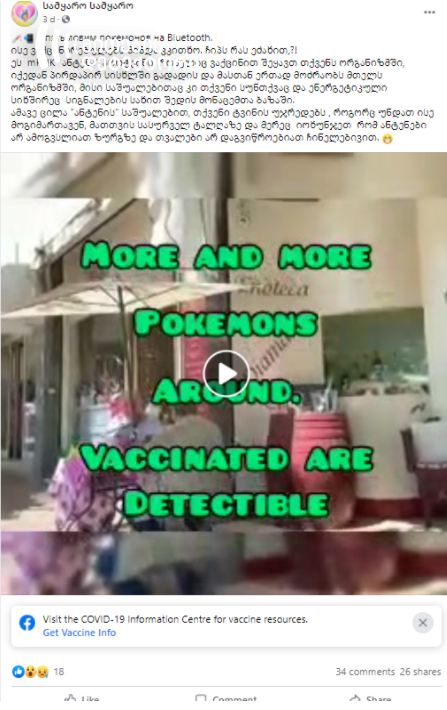 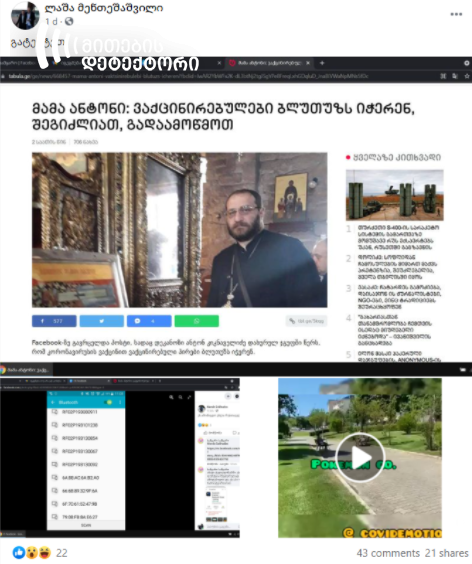 Per “Samkaro Samkaro’s” claim, the detection of vaccinated people with Bluetooth and their connection to the said device is linked to mRNA technology since it is thanks to this technology that remote magnetic protein enters the human body and controls brain activities. 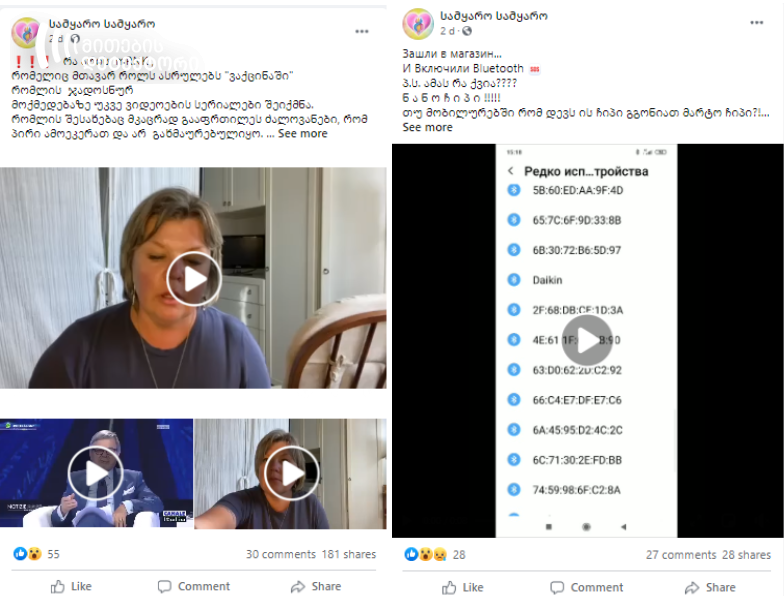 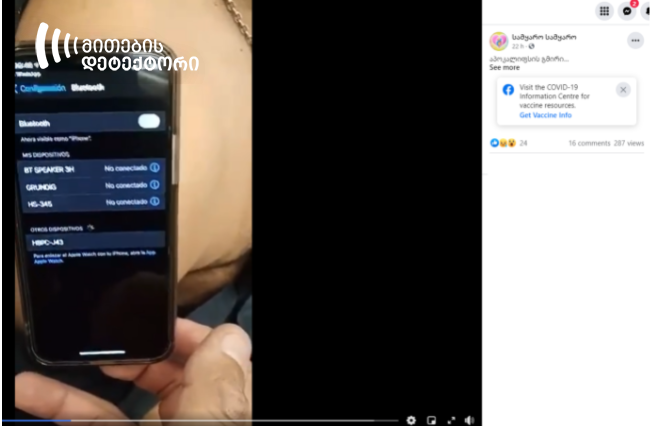 Claim alleging that mRNA protein, which is injected into the human body following the vaccination, enables the person’s connection to Bluetooth device ensuring their detectability via smartphone is false. In reality, the codes depicted in the videos are MAC addresses of devices, which, instead of vaccination, determine the device ability to connect with other devices. The mRNA technology of vaccines is safe and, enables the human body to develop the immune reaction necessary to fight against the virus, instead of connecting it to Bluetooth.

Bluetooth is a wireless technology for exchanging data. When Bluetooth is enabled in the smartphone, it displays devices it can connect to within the range, thus Bluetooth-enabled phones in such crowded places as parks or outdoor restaurants would display a great range of possible devices to connect to. Woman in the disseminated video moves around precisely in such places. 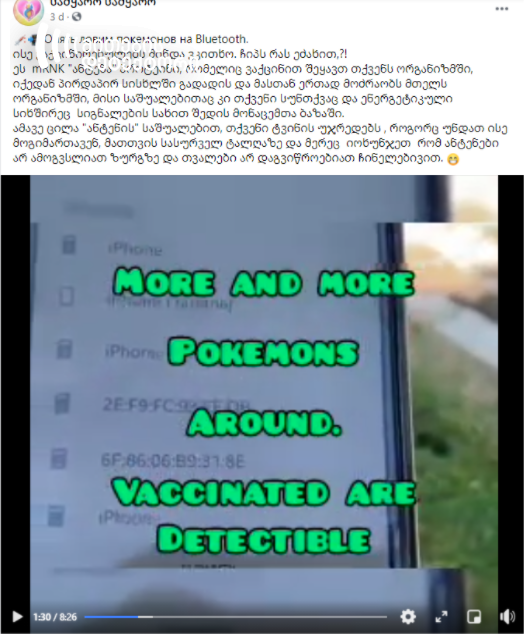 The fact that a new device is displayed on the phone once a new person comes near implies that Bluetooth is able to connect to one more device because it’s within the range, not because the said person is vaccinated and has a personal code.

It’s noteworthy that the fact that codes containing different letters and numbers appear when we use Bluetooth to connect with devices isn’t suspicious at all. The displayed code is called Media Access Control (MAC) address and identifies devices that can be connected. The aforesaid code is included in phones and computers with Bluetooth devices, as well as new washing machine models. MAC address will change into the real name of the device once the owner of the said device will accept the request for a Bluetooth connection. 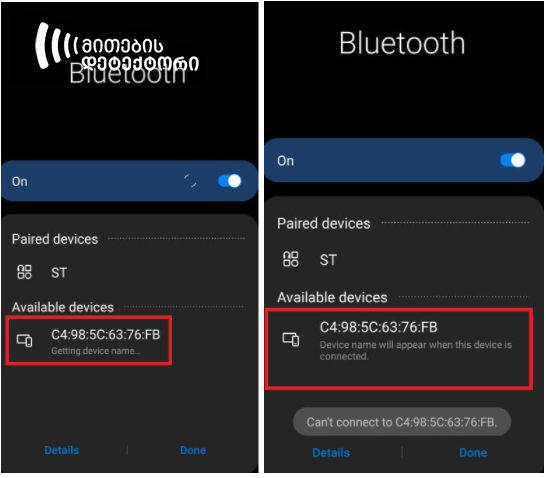 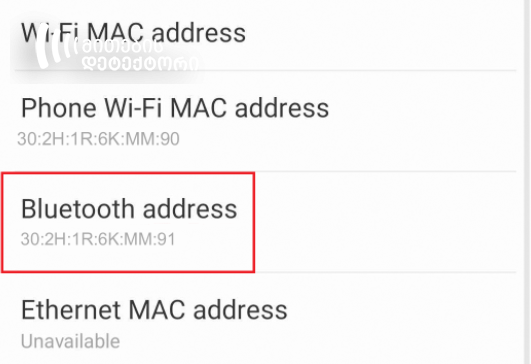 It’s important to note that when the Bluetooth is enabled, some devices appear with owner’s name right away instead of the MAC address as it’s shown in the aforesaid image: 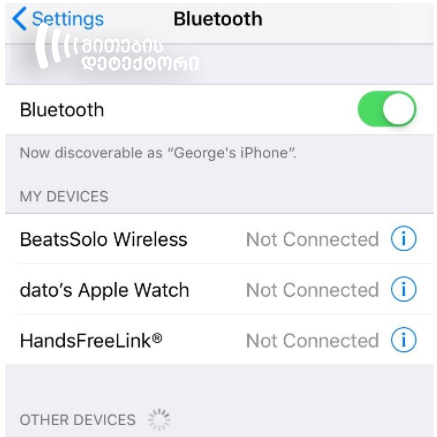 Any owner, regardless of Android or iOS system, can easily change the name of Bluetooth.

It is also important that as soon as Bluetooth is enabled on the phone, our phones become detectable to devices that already have Bluetooth turned on, allowing you to connect. 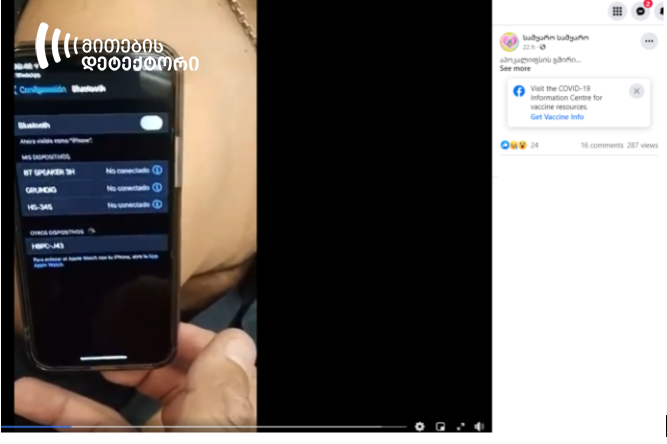 Therefore, video, disseminated by Samkaro Samkaro, depicting new devices appearing on the screen of the Bluetooth-enabled phone once it’s near the arm of a vaccinated person, cannot be evidence for the claim that Bluetooth can identify vaccinated individuals.

Similar to other COVID-19 vaccines, mRNA-based vaccines don’t contain metal or magnetic components. It also doesn’t include any ingredients that can transmit radio waves within the short-range. Bluetooth needs precisely the latter to function.

Read more on the vaccine ingredients in the articles by “Myth Detector”:

The mRNA technology-based vaccines instruct our bodies how to produce so-called “spike proteins” (that protrude on the surface of the virus causing COVID-19) or at least a fragment of the protein that stimulates an immune reaction in our bodies. Such immune reaction that produces antibodies will protect us from infection if an actual virus enters our body.

Read more on the mechanism of actions of mRNA technology in the articles by “Myth Detector”: