Basing On A Processed Photo, PIA States That Alien Mummy Was Found In Egypt 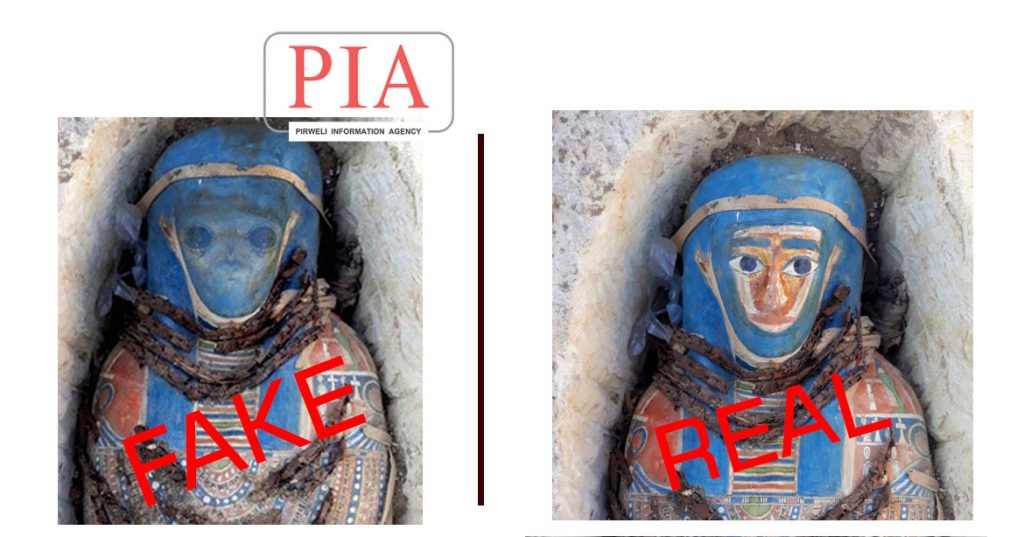 On March 18, news agency “Pirweli” published an information headlined “Alien mummy was found in Egypt”. According to the material, the scientists found the alien mummy during the archaeological excavations in Egypt.

To illustrate the reliability of the information the material is accompanied by the photo, where the mummy looked as if he had an “alien’s” face. In Pia’s article the foreign edition Newsinstact.com is mentioned as a source. 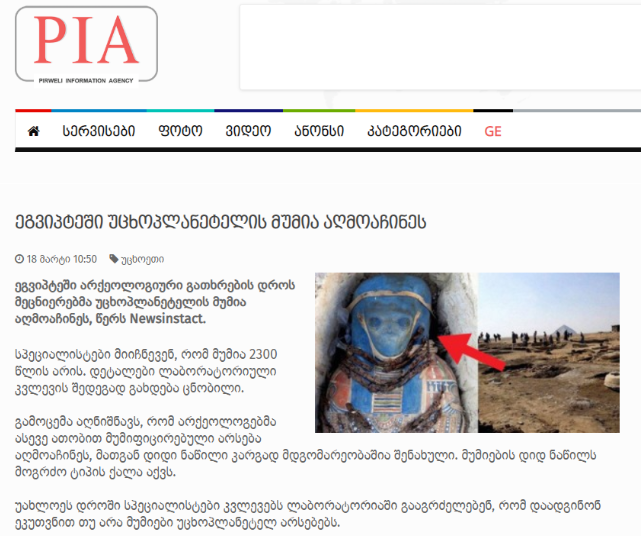 The information spread by Pia is fake. The source used by the Pia – Newsinstact.com is a web page, which writes about different fictive stories about aliens and flying saucers. The photo, attached to the information, is processed. In fact, the mummy has been found on the territory of the ancient city of  Egypt – the Memphis and belongs to the representative of rulling class of the city dated back to 7th-4th centuries B.C..

The processed photo of “alien mummy”

The photo, that PIA spreads on the basis of “newsinstact” and states, that it belongs to the alien mummy found in Egypt, is processed with a program. In fact, the photo belongs to one of 8 mummies, that have been found on the territory of ancient Memphis. The information about finding of mummies was published by National Geographic on November 28, 2018, based on the statement made by the Ministry of Antiquities of Egypt. 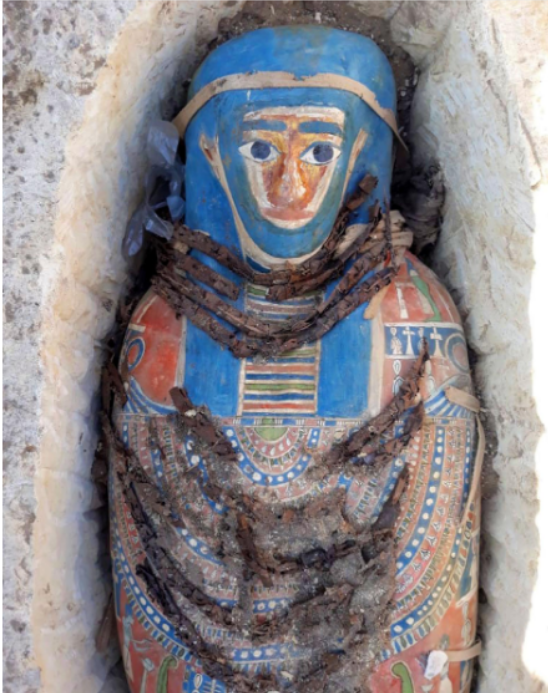 Basing on Pia.ge, the fake story about “alien mummy” was spread by Georgian web page brandnews.ge while in the social network Pia’s link was spread by the web pageGogaggg. 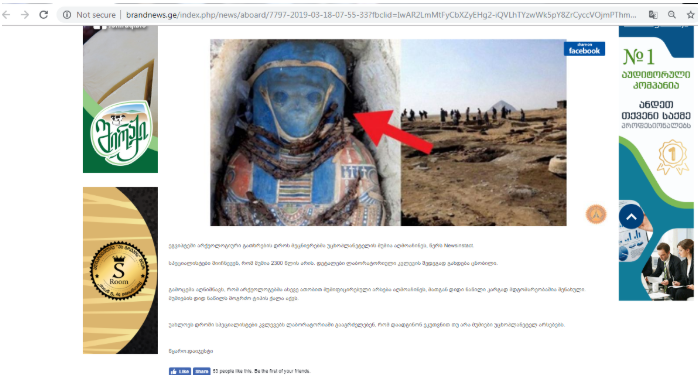 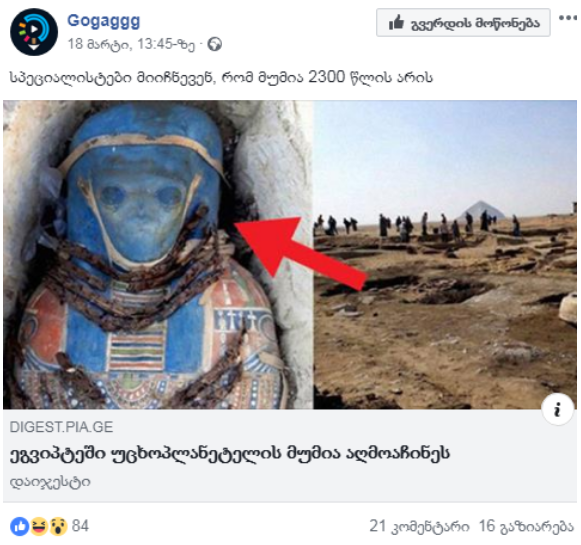 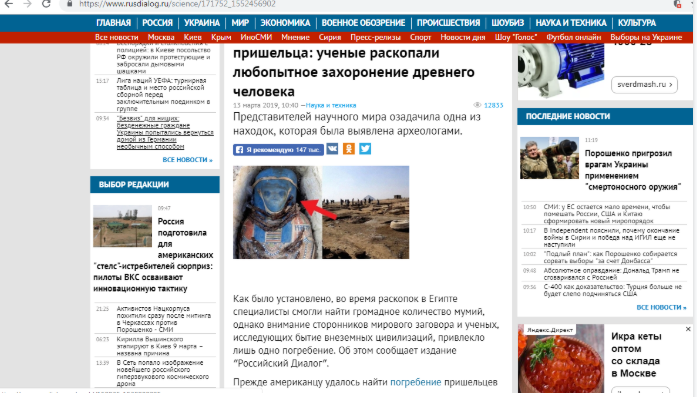 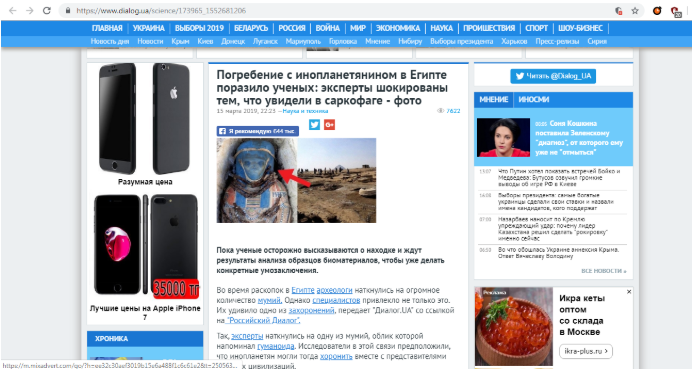 The news agency Pirweli (PIA) was established in November 2006. It is associated with the name of the current Member of Parliament from the Georgian Dream, Ani Mirotadze. In 2010, 100 percent of the shares in the news agency was owned by Levan Mirotadze; in 2013, the agency was registered in the name of Khvicha Senakia whilst in 2014, the owner of 100 percent of the shares became Dimirti Tikaradze. Accordingt o MDF in 2015, the news agency PIA received budget revenues from the contracts signed with state entities in the amount of 80 236 GEL.

Newsinstact.com, which Pia mentions as an information source, writes about different fictive stories about aliens and flying saucers and attaches processed fake photos to the materials. 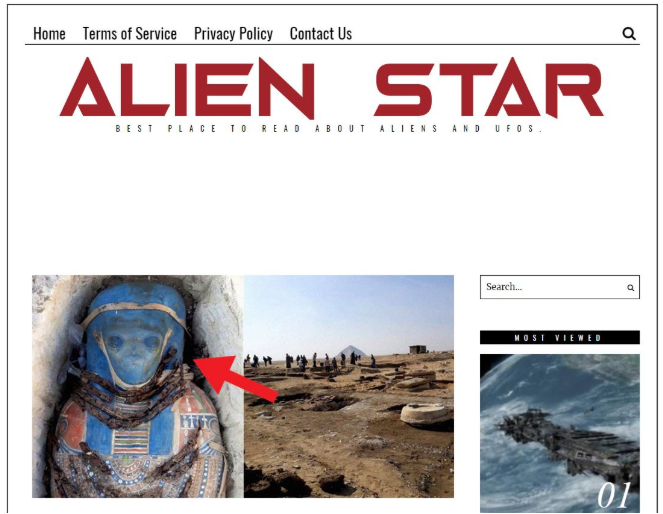