Asaval-Dasavali’s disinformation and photomanipulation, as if “Aghmashenebeli Avenue is already called Arab Street in Google! “ 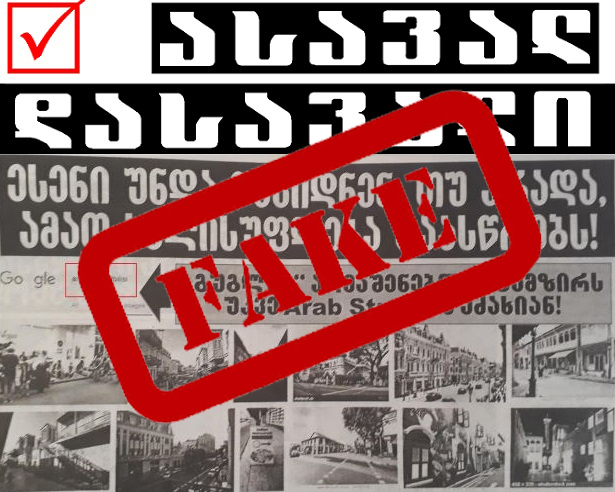 In the Asaval-Dasavali issue of the week of September 11-17 a photo was published, with the heading “Aghmashenebeli Avenue is already called Arab Street in Google! “, accompanied with a screenshot of Google Search with the words ‘Arab Street Tbilisi’ typed in and 12 photographs appearing as the result of the search. The photo was illustrating an article in which the journalist speaks about the threats for the country I which context he mentions the degradation of Aghmashenebeli Avenue in Tbilisi and the proliferation of Arab people there. The photo collage shown by “Asaval-Dasavali” is fabricated, since 7 out of 12 photographs feature Arab Street in Singapore and in Dubai, 2 of the photographs represent cafes on Ivane Machabeli and Erekle II streets in Tbilisi respectively, 2 more show a hotel (Tbilisi Times, booking.com) and a restaurant (Spice Garden Restaurant, tripadviser.com) on Aghmashenebeli Avenue, the whole accompanied with reference to the streets with matching designation in Tbilisi. 1 photo is from the material under the caption “Тбилиси”(Tbilisi) published on dgbgeorgia.weebly.com website, where the word ‘Arab’ is used in the context of eighth century invasions by Marwan II and the Khazars.

Besides, “Asaval-Dasavali’s” claim is absurd, since the whole principle of Google search engine’s service is to reveal to the user all textual, photo and video data from the thousands of websites that are publicly accessible. Accordingly, the search engine shows all of the data uploaded to the web by millions of users or web pages using the same key words, which in no ways guarantees that the words specified in the search are interrelated either by cause or subject matter, and that search results are reliable and necessarily authentic.