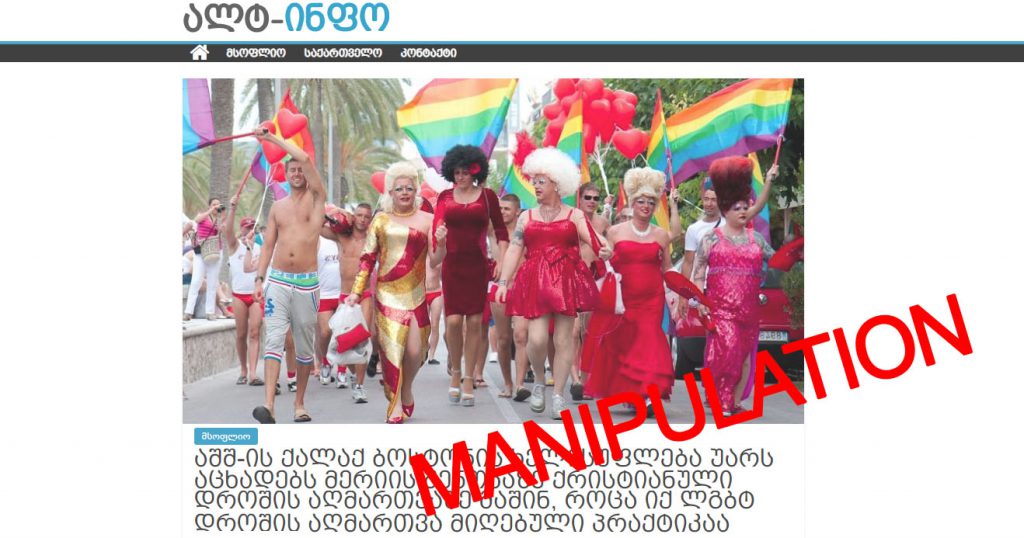 On August 30, 2018, the far-right portal ALT-INFO published the article entitled “The US City Boston Authority Declined to Raise a Christian Flag on a City Hall Building. While Displaying the LGBT Flag is a Common Practice.” According to the material, the request of the director of the charity organization Camp Constitution, Harold Shurtleff for raising the Christian flag with a cross on the City Hall flagpoles, was rejected, as the city authorities maintain a policy of refraining from flying non-secular flags. ALT-INFO contrasts the refusal of raising the Christian flag on the building of City Hall to displaying the LGBT flag. The article emphasizes the common practice of flying the LGBT flag on the building of Boston City Hall.

The article published by ALT-INFO is a speculation. Whereas flying the LGBT flag is an action taken within the frames of human rights protection, displaying the Christian flag with a Cross on a public administration building violates the principles of secularism. The Constitution of the United States is based on the principles of equality and secularism, implying the equality of all religions and the separation of government institutions from religious institutions. The two events presented in the article are of completely different matters and their comparison is aimed at manipulating religious feelings. It should be noted that in Boston, as well as in other cities of the US, LGBT pride parade is held and it is a peaceful march against discriminating LGBT people and violent approach towards them. According to the official website of Boston City Hall, the LGBT flag on the City Hall flagpoles was raised within the pride parade.

The USA is a secular country. Granting privileges to a certain religion is unacceptable. The state is absolutely separated from the religion. Consequently, raising the Christian flag on the City Hall flagpoles would violate the US constitutional and state principles.

Alt-Info approach of contrasting the Christian flag to the raising of the LGBT flag, emphasizing the equality within the frames of human rights protection of LGBT people, is a manipulation of religious feelings and a speculation with the religious and sexual identities.