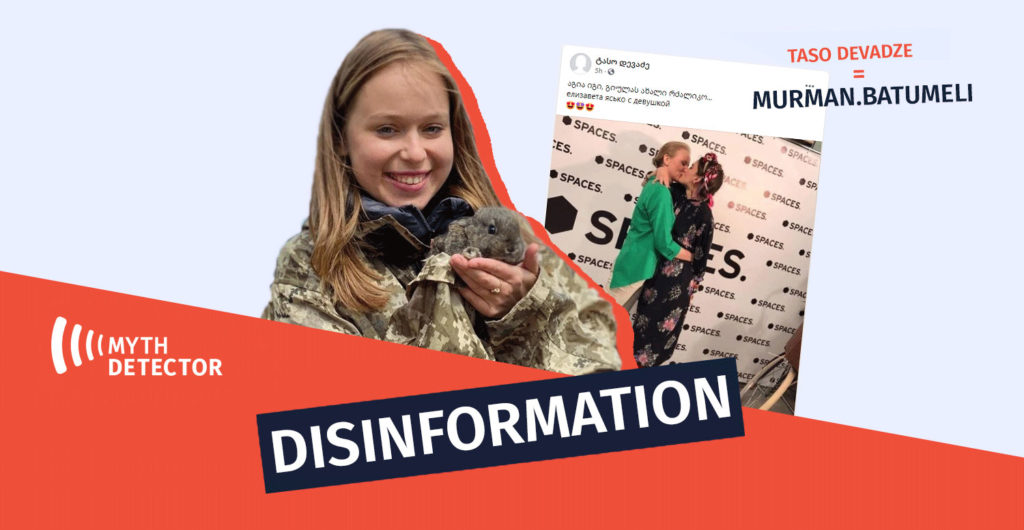 On October 2nd, 2021, a user “Taso Devadze” has published a picture depicting two women kissing in the Facebook group “Citizen – Non-Governmental Organization.” The image is accompanied by the following description: “That’s her the new daughter-in-law of Giuli Alasania… елизавета ясько с девушкой [Yelyzaveta Yasko with a girl],” claiming that the image showcases Yelyzaveta Yasko, the Ukrainian MP of the “Servant of People” party and the new partner of the Georgian ex-president Mikheil Saakashvili.

The picture with an identical description was shared by the founder of the “Georgian Mission,” Ramaz Gagnidze.

An article about the new family of Saakashvili was published by nostal.ge, where the background and profession of Yasko were discussed, accompanied by the above-mentioned photo. Nostal.ge claimed that Yasko has become famous for her “fake lesbian photos.”

The information about Yasko kissing another woman in public was circulated last year as well. The picture was published by infopostalioni.com on November 28th, 2020. 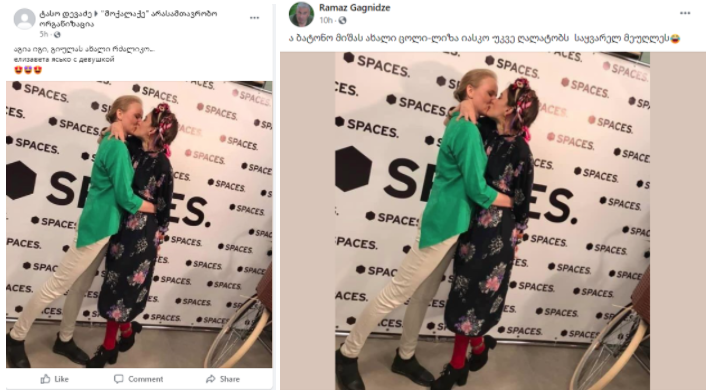 The photo disseminated on the social network depicts not Yelyzaveta Yasko but Daryna Petryshyn kissing Anna Sukhomlina. A statement regarding the photo was issued by Liza Yasko herself, as well as the user who posted the image for the first time on the social network and denied the information that the picture showed Yasko.

For the first time, the photo with a false description was disseminated by the leader of the “Radical Party” Ihor Mosiychuk, in November 2019. Mosiychuk claimed that one of the girls depicted in the picture was Liza Yasko. 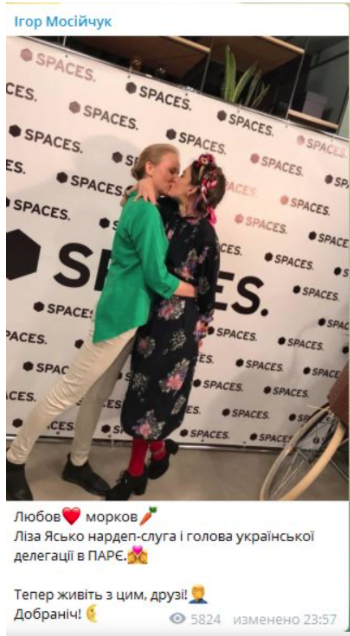 The authentic version of the image was first published on social media by the user Kateryna Chepura on November 28th, 2018, and tagged the persons Hanna Sukhomlyn and Daryna Petryshyn, shown on the image. The following day, Kateryna Chepura has published similar photos, showcasing vividly that the woman with the green attire is not Liza Yasko. 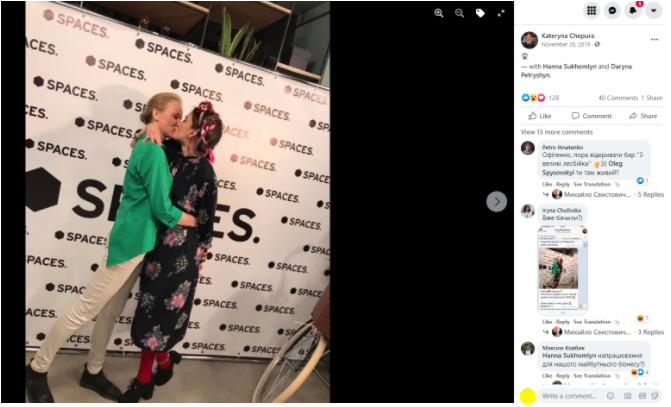 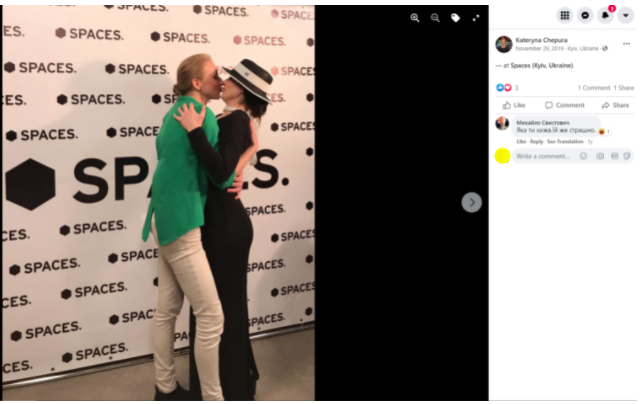 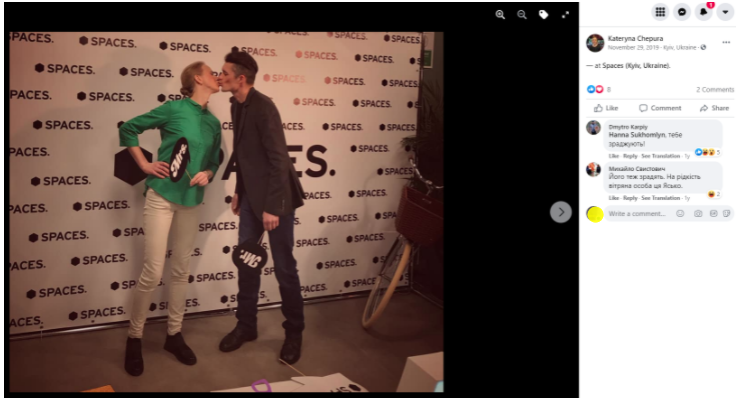 On November 29th, Kateryna Chepura responded to the false allegations about Liza Yasko being portrayed in the picture, labeling the information as false. 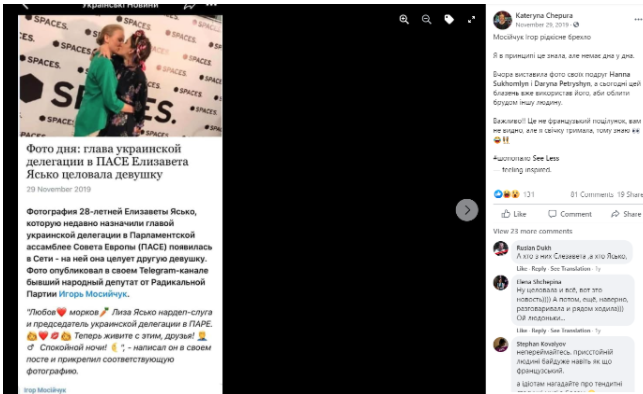 How do Daryna Petryshyn and Liza Yasko look like? 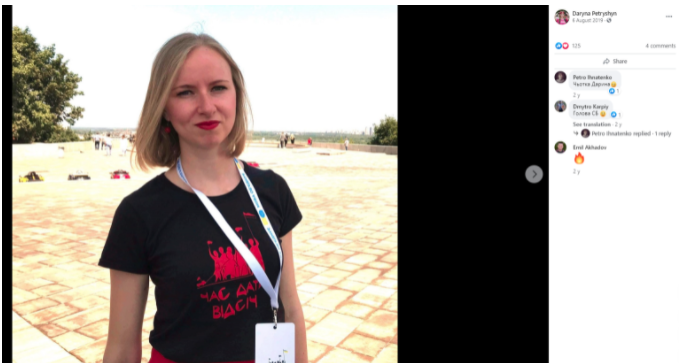 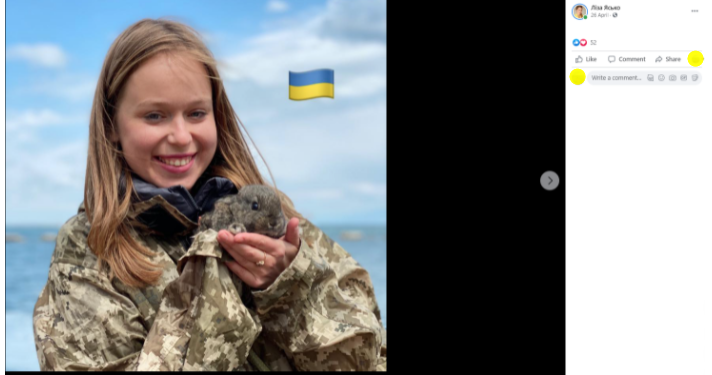 Liza Yasko herself addressed the false claims and issued an official statement on her Facebook page, confirming that the person depicted on the image is not her:

Liza Yasko: “It is a shame that, once one of the leaders of “Айдар,” Ihor Mosiychuk, is engaged in the creation and distribution of fakes. You don’t have to be acquainted with me or ever see me, you just have to google any of my photos to understand that I’m not on this photo, no matter how much Ihor Mosiychuk wants it. It is a shame not only for the author of the fake, but also for the level of political culture of the society in which such cheap attacks always find their consumer. I don’t know who these girls are, but I’m sorry that they were involved in this shameful provocation. I was and remain ready for information attacks. As soon as it became known that I was one of the contenders for the position of chairman of the committee – attacks have commenced; So, the author of this and the authors of other similar fakes should know – each new provocation only makes me stronger.” 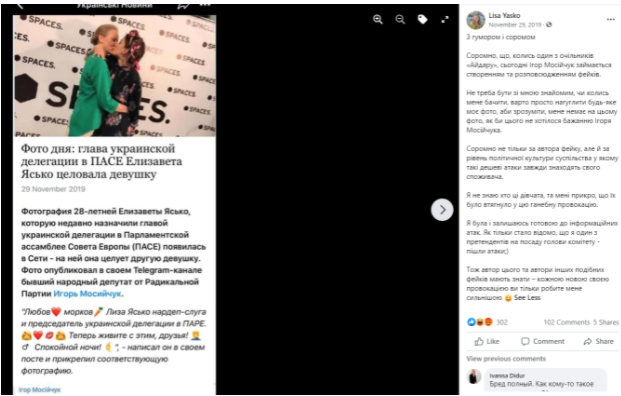 About the Source
The Facebook user Taso Devadze (Obituaries Obituaries) that disseminated the image on social media is allegedly a fake profile. The profile indicates murman.batumeli in the URL link.