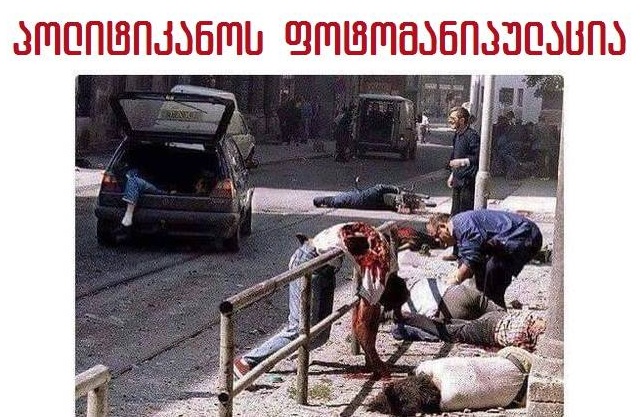 On January 9, photo manipulation was published on Politicano’s Facebook page with a caption saying that the photo was picturing the outcome of NATO bombings in Serbia in 1999.

Actually, the photo does not show Kosovo in 1999. It was taken in 1995 and shows shelling of Markale market by the Army of the Serb Republic (Republika Srpska) during the Siege of Sarajevo, Bosnia.

Fact #1: The photo by Reuters shows the explosion that took place on August 28, 1995 near Markale market.

The photo published by Politicano was taken by a Reuters’ photograph Peter Andrews on August 28, 1995 (see the Reuters archive) and shows the explosion near Markale market that killed 38 people. The explosion took place in the light of the armed conflict between the Republic of Bosnia and Herzegovina and Serb Republic. In 1999, the UN investigation revealed that the missiles were thrown from west, Lukavica, which then belonged to Bosnian Serbs.

Fact #2: NATO intervention in Kosovo War began on March 23, 1999. Markale market explosion shown on the picture took place in 1995, during the Bosnian War.

Fact #3: NATO intervened in the Bosnian War together with UN forces on August 30, 1995.

Following Markale market shelling, NATO began an aerial campaign (Operation Deliberate Force) in cooperation with UN (UNPROFOR) against Bosnian Serbs on August 30. The air operation lasted two and a half weeks and played an important role in ending the Bosnian War. The War in Bosnia ended on November 21, 1995 following Dayton Accords.