YouTuber “Utskho” Shares a Manipulative Video regarding an Incident in Turkey 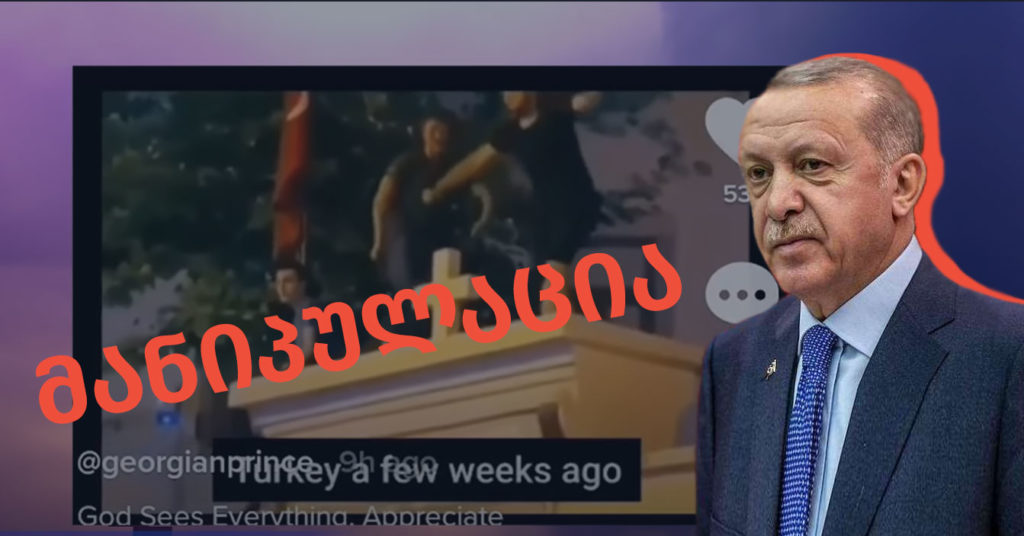 On August 4th, the Facebook group “Konservatori” published a video accompanied by the following description: “Insulting the cross and its tragic consequences in Turkey.” The video showcases an incident in Turkey when two men danced alongside the cross erected on top of the fence of a church. The video links the incident with the massive fires raging in Turkey. The video belongs to a Georgian YouTuber and was first published on the YouTube channel “Utskho.” The YouTuber talks about God’s wrath, links the incident with the President of Turkey and, by bringing up the examples from the past, seeks to reignite the historical traumas:

Utskho: “Even the footages that I showed you, how these barbarians dance next to the biggest symbol of Christianity and mock it. Do you think that all of this is happening by accident? I understand that many catastrophes and calamities happen every year and that this is a normal thing for the world, but look at the politics of Erdogan, look at the actions of the Turkish people. The church of Nicaea, where the first council was held, is now within the territories of Turkey, and they have converted it into a mosque. In 2019, Hagia Sophia was removed from the UNESCO list of historical heritage, and now it is just an ordinary mosque… Everything is being Islamized… People started telling me yesterday that I should have compassion towards the events happening in Turkey, saying pray for Turkey as if they are the saints themselves. Look what they were doing to Georgian women and men for centuries. Today Erdogan supports the territorial sovereignty of Georgia; it’s very ironic since Turks took more than half of it.”

The scenes displaying men dancing next to the cross are used without context and are conspiringly linked with the raging fires in Turkey. Linking the incident with the politics of Erdogan is also manipulative since the video does not reveal the fact that the people involved with the incident were arrested, while the president and the other representatives of the Turkish Government have condemned their actions. Even though the churches of Hagia Sophia and Nicaea have been converted into mosques, the Hagia Sophia of Istanbul has not been removed from the UNESCO world heritage sites’ list.

According to the information of the Turkish pro-governmental outlet Daily Sabah, 3 persons were arrested on July 12th for defiling the Armenian Church in Istanbul. The arrest has followed the videos spread in social media, showcasing how two men dance alongside the cross erected on top of the fence of a church. The third suspect remained near them. The outlet stressed that the suspects participated in an anti-COVID restriction demonstration and protested the restriction of listening to loud music at night.

The event was also discussed by the Minister of Internal Affairs of Turkey, who called the incident an “insulting action.” Süleyman Soylu wrote on his Twitter account that he contacted the director of the foundation managing the church and expressed his regrets and sorrow. 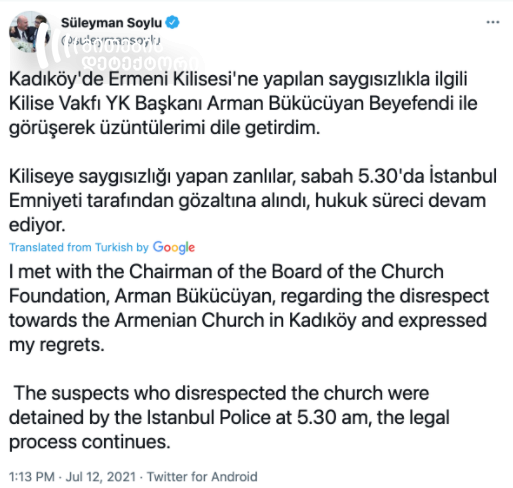 The action was condemned by the incumbent party as well. “Our civilization never tolerates the actions of insult and mockery in sacred places,” – said the deputy chair of the “Justice and Development Party.” The official press speaker stated that disrespect towards the church is the same as disrespect towards everyone.

The incident was condemned by President Recep Tayyip Erdoğan as well. After the meeting with the board of ministers, he stressed that the Government would investigate the actions and not tolerate any behaviour of this kind.

The Hagia Sophia temple is included in the UNESCO world heritage list together with the historical district of Istanbul. After the decision of the Turkish Government to transform the church into a mosque, UNESCO made a special announcement stating that the organization was concerned about the fact that the Turkish Government did not consult with the organization regarding the matter. This year, at the annual session in China, UNESCO called Turkey to update them on the issue of historical site protection. As a response, the Ministry of Foreign Affairs of Turkey claimed that the transformation did not have a negative impact on the heritage site. Despite the statement of UNESCO that the heritage site status of Hagia Sophia might be reconsidered, the building has not been removed from the list as of today.

Recep Tayyip Erdoğan, the President of Turkey, announced that from July 1st, the restrictions imposed due to the Coronavirus pandemic were to be lifted. Nonetheless, the restriction on musical programs and events initiated on June 21st would remain enforced. The decision caused the dissatisfaction of artists and thousands of civilians and was followed by mass demonstrations in the streets of Istanbul, where the participants were dancing in the streets as a sign of protest. The participants believe that the restriction has nothing to do with the coronavirus and is purely ideological.

As for the massive fires raging in Turkey, more than 200 origins appeared during July and August in Turkey. More than 1600 square meters of land was burnt. The fire first started in the Antalya territory on July 28th, reached the settlements and forced the population to evacuate. As of today, the fires resulted in 8 deaths. The potential reasons behind the fires are said to be high temperature and drought. More than 140 new origins of fire have appeared in neighbouring Greece as well.

YouTube channel “Utskho” was created on April 1st, 2018. The first video was uploaded on July 12th, 2018 using the title: “How to fight Globalization.” Several conspiracy videos have appeared on the channel ever since, including the conspiracies about the moon landing, Freemasonry and Illuminati, the death of Kennedy and 5G technologies. The YouTuber often shares anti-Western, homophobic, and anti-feminist narratives in their videos. They also claim that in case of oppressing the conservative values, “Georgian people will stand together like never before.”