Will Support for Belarus Protests Trigger Recognition of Independence of Abkhazia and Samachablo? 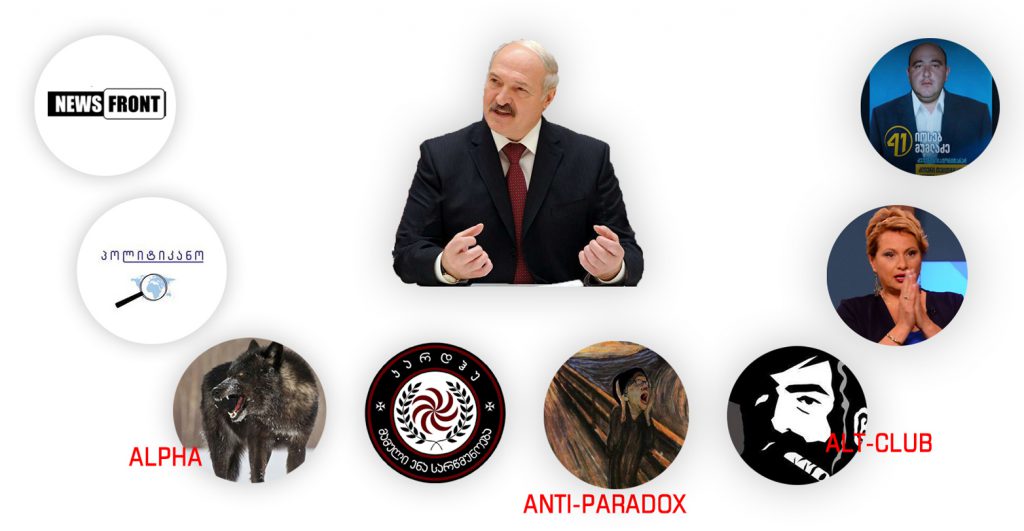 The presidential elections held in Belarus on August 9 triggered mass protests. The Belarusians took to the streets after it emerged that incumbent leader Alexander Lukashenko, who has been ruling the country since 1994, garnered 80% of votes. Lushashenko’s regime used force and violence to disperse peaceful protesters.

Amid Belarus protests, openly pro-Russian, Kremlin-affiliated actors, and media outlets, as well as antiliberal groups and some politicians expressed support and solidarity with Lukashenko in Georgian media outlets and social media. Three main messages were voiced in respect of recent developments in Belarus:

Message 1. The Georgian side gives Lukashenko a reason for recognizing the independence of Abkhazia and Tskhinvali region

Pro-Kremlin media outlet News Front and antiliberal groups focused on the fact of non-recognition of Georgia’s occupied regions by Lukashenko, trying to sow fear that expressing support for Belarus protests instead of supporting the Belarusian leader will prompt Lukashenko to recognize the independence of Abkhazia and Tskhinvali region.

Citing Nikoloz Mzhavanadze, head of Rights Defenders’ Union, News Front tries to sow fear in its editorial that if Georgia refuses to support Lukashenko, the latter will recognize the independence of Russian-occupied regions of Georgia. Shota Apkhaidze, editor of News Front, claims that Lukashenko actually “saved” Georgia by not recognizing Abkhazia and Tskhinvali region as independent states. The same article was also published by tvalsazrisi.ge. Moreover, antiliberal Facebook page “Alt-Club” notes that the demand raised by local CSOs and National Movement’s activists to express support to Belarus protests creates a threat to Georgia, since it gives Lukashenko a reason for recognizing the independence of Abkhazia and Tskhinvali region. Facebook page “Kardhu” also promotes an identical opinion.

Further, antiliberal Facebook page “Kardhu” and pro-government page “Polit Blog” spread one and the same quotes by Lukashenko, stressing that he recognizes Abkhazia and Tskhinvali region as parts of Georgia. One of Facebook users shared the photo with the same caption in a group “2020& Ivanishvili’s followers,” adding a new caption “Solidarity with Lukashenko.” Referring to this fact, antiliberal group “Kolkhetian-Iberian Unity” promotes an opinion that it is in Georgia’s interests if Lukashenko retains power.

Message 2.  Idealization of the dictator: solidarity with Lukashenko; Lukashenko – a successful leader and defender of traditional identity.

Along with antiliberal and pro-Kremlin Facebook pages, Soso Mumladze, member of Gori Sakrebulo from the ruling Georgian Dream party, also expressed support for Belarusian leader Alexander Lukashenko. He even posted the latter’s photo with a caption “Solidarity with Lukashenko,” but removed the post later. Moreover, antiliberal Facebook page “Anti-Paradox” also expressed support for Lukashenko. Facebook page Politicano with links to the Primakov Public Center also portrayed the Belarusian leader in a positive context.

Three articles published by pro-Kremlin News Front focused on Lukashenko’s successful rule of Belarus. He was portrayed as an alternative to liberalism. Gulbaat Rtskhiladze, founder of the Eurasian Institute, noted his diplomacy and successful rule, while one of the articles published by News Front described Belarus as the last country on the earth free from Soros and “sodomites.”

Besides News Front, antiliberal Facebook pages “Kardhu” and “Alpha” also referred to Lukashenko as the defender of traditional identity.

3. Protest against Lukashenko is the process orchestrated from outside.

Davit Chichinadze: “… It is a written scenario as if an external force is involved in it… What is Poland doing, so many people have arrived; you have seen what is happening in Russia… and now, when people come out and kill each other in the United States, are they protesting against democracy?!”

In her Facebook post published by Georgian tabloid Alia, Lali Moroshkina promotes conspiracy theories, claiming that people did not forgive Lukashenko his successful fight against COVID-19. She calls the people who sustained injuries during protests “the victims of pseudo-liberal machinery” rather than of Lukashenko. According to News Front, Georgian civic activists and opposition politicians arrived in Belarus to stage a revolution.

According to the material published by tvalsazrisi.ge, Irakli Jankarashvili, writer for this media outlet and News Front, claims that Belarus is facing a real threat of NATO’s military deployment. 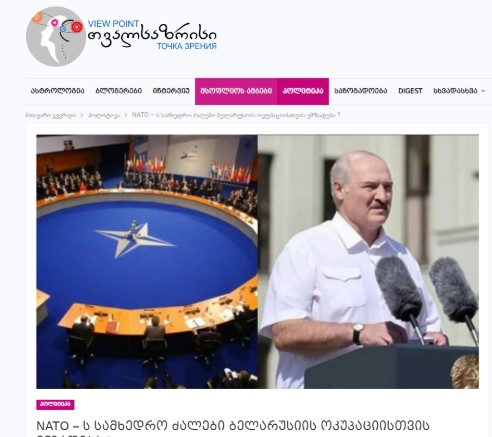 Kardhu and News Front are quoting Lukashenko as saying that Belarus protests are allegedly orchestrated from abroad and are linked to European countries.