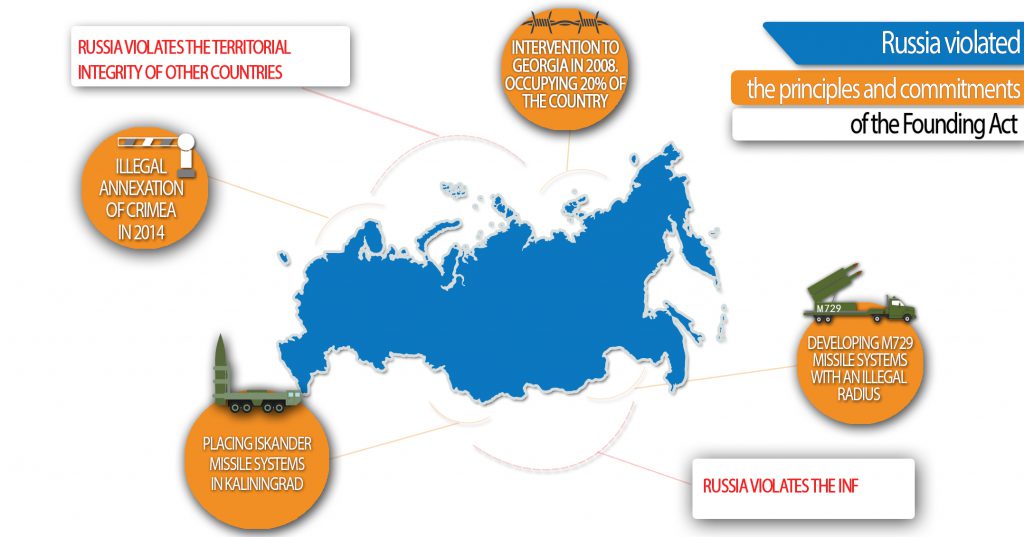 On June 25, 2020, a Russian webpage of Sputnik-Georgia published a comment by Alexander Grushko, the Deputy Minister of Foreign Affairs of Russia, on the possible relocation of a part of the American troops from Germany to Poland. According to Grushko, the relocation would go against the principles of the Founding Act, signed between the NATO and Russia in 1997.

Alexander Grushko: “Of course, we will look at this not only from the point of view of military consequences for regional security, taking into account the legitimate interests of Russia and our allies, primarily Belarus, but also from the perspective of observing the fundamental position of the Russia-NATO Founding Act, which contains the Alliance’s commitments to refrain from additional deployment of significant combat forces.”

The 1997 Agreement does not prohibit placing the American military forces in Poland or Eastern Europe. The document mentions that NATO’s commitment to refrain from placing substantial combat forces is relevant to the security situation already in place in 1997 or to the one that could have stemmed from that security situation. Aggressive actions by Russia, on the other hand, radically shifted the European security situation and also represented a violation of the fundamental principles of the act and the duties, stemming from it.

1. NATO’s duty to refrain from placing substantial combat forces is relevant to the security situation that was in place in 1997 or to the one that could have stemmed from it.

The Founding Act reads: “NATO reiterates that in the current and foreseeable security environment, the Alliance will carry out its collective defence and other missions by ensuring the necessary interoperability, integration, and capability for reinforcement rather than by additional permanent stationing of substantial combat forces … In this context, reinforcement may take place, when necessary, in the event of defence against a threat of aggression and missions in support of peace consistent with the United Nations Charter and the OSCE governing principles, as well as for exercises consistent with the adapted Treaty on Conventional Armed Forces in Europe…”

The document imposes the identical restrictions on placing conventional forces in Europe on Russia too.

2. Russia’s aggressive actions shifted the security situation in Europe as compared to 1997. Russia itself violated the principles and commitments of the Founding Act.

According to the Founding Act, the NATO–Russia relations are based on seven principles, which include: “Refraining from the threat or use of force against each other as well as against any other state, its sovereignty, territorial integrity or political independence”. Moreover, the Act defines the “respect for sovereignty, independence and territorial integrity of all states and their inherent right to choose the means to ensure their own security” as an important value.

Russia violated the fundamental principles of the Act:

Both parties of the Founding Act recognize the importance of other agreements and commit to respect them – something that is considered one of the bases of their relations. One of such agreements is the Intermediate-Range Nuclear Forces Treaty (INF).

Russia destabilizes the security situation in Europe by militarizing and provocatively demonstrating its military power.