Why Was a Statue Associated with Stepan Bandera Taken Down in Poland? 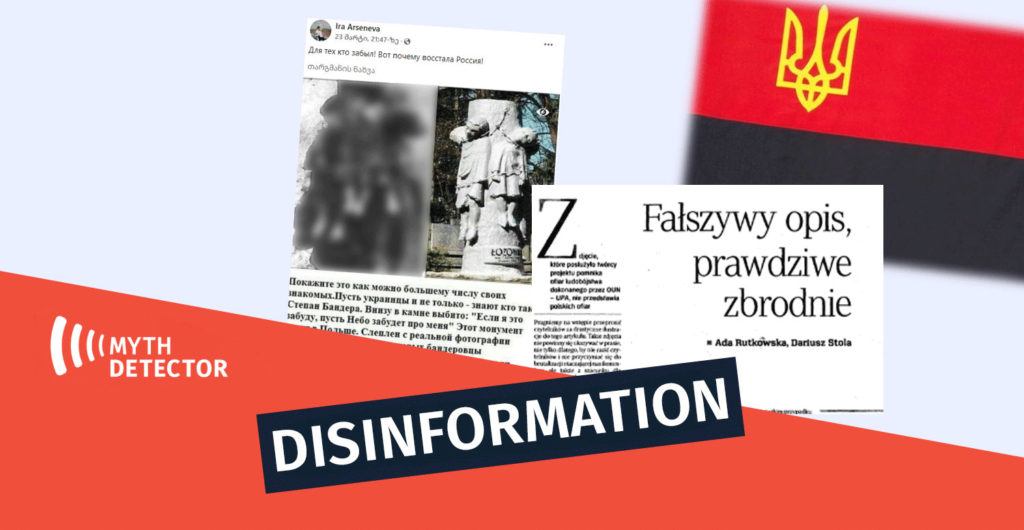 On March 23rd, the Facebook user “Ira Arseneva” published a photo with the caption: “For those who forgot! This is why Russia rebelled!” 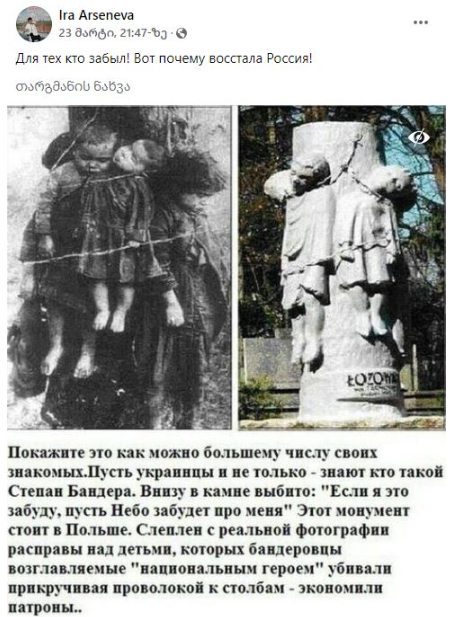 The published photo features the following description: “Show this photo to as many of your acquaintances as possible. Ukrainians, and not only knew who Stepan Bandera was. On the stone, below is engraved: “If I forget this, let the heavens forget me…” This monument stands in Poland. It is made from real photos of the massacre of children, which the Banderites, led by the “National Hero”, tied to the poles with barbed wire – saving bullets.”

The photo with the false description appeared on the Russian Facebook page – “За великую Россию” and other online platforms – russia-reborn.ru, joyreactor.cc in the past as well.

The disseminated photo has nothing to do with Stepan Bandera. The monument to the victims of the UPA (Ukrainian Insurgent Army) victims, which was indeed erected in 2003 in the Polish city of Przemyśl, but according to the local authorities, it was done so illegally. The monument was taken down on October 8th, 2008, after it was revealed that the children depicted in the photos were not the victims of the UPA but children killed by a mother on the grounds of depression.

Is the Monument linked to the Ukrainian Insurgent Army (UPA)?

In 2003, on the 60th anniversary of the Massacre in Volhynia, a memorial to the Polish victims of the UPA (Ukrainian Insurgent Army) was erected in the Polish town of Przemyśl. Originally there should have been a cross, a stone and a memorial plaque on the memorial. However, a monument to the murdered children tied to a tree with barbed wire was erected at the memorial. The author of the monument is unknown. The monument attracted attention after an article published in the May 19th, 2007 issue of the leading Polish newspaper “Rzeczpospolita” entitled – “False description, a real crime.” In the article, historians Dariusz Stola and Ada Rutkowska argued that the photo was actually taken before the war and that it had nothing to do with UPA crimes. According to the local authorities of Przemyśl, the monument was erected illegally, and it was not included in the memorial project. The information about this was spread by the local media of Przemyśl as well. 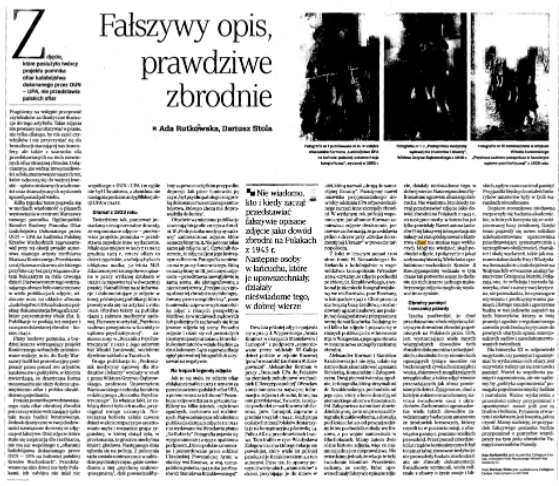 On October 8th, 2008, at the request of Andrzej Przewoźnik, Secretary of the Council for the Protection of Martyrs, the illegally erected monument was removed from the UPA Victims’ Memorial.

Who are the Children depicted in the photo?

The four children in the photos were the children of a Roma woman – Marianna Dolińska. The tragedy happened 98 years ago near the town of Radom in Poland. The 32-year-old woman was left alone with her four children when her husband, a week before the tragedy, was arrested on multiple counts of theft. Wandering through the villages near Radom, with reigning hunger and poverty, Dolińska came to the conclusion that killing children was the way to save them from evil. On December 12th, 1923, Mariana Dolinska killed her four children by hanging them on a tree. The next day, Mariana Dolinska reported to Radom police and confessed the murder. The 32-year-old woman was arrested and taken to Twork Psychiatric Hospital near Warsaw. Marianna Dolińska died in 1928 and was buried in the hospital cemetery. 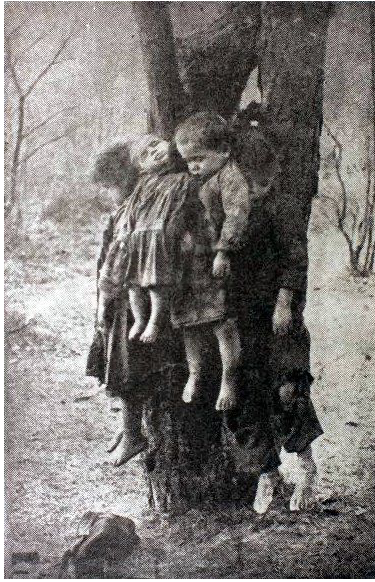 Twork Psychiatric Hospital diagnosed Marianna Dolińska with bipolar disorder. Notably, the photo was initially published by Dolińska’s personal doctor as an illustration of her illness.

In 1923, after the tragedy, a police photographer took several photos of children. The murder was not reported by the Polish newspapers at the time, as starvation-related deaths and suicides were rather common. Photos of the tragedy have been circulated in various interpretations over the years. Both Nazi and Soviet propaganda used the photos to their advantage.

One of the photos of the murdered children and a portrait of their mother was first published in 1928 in an article by the director of Twork Hospital entitled- “Madness and Gloomy Psychosis in Court Psychiatric Case Studies”. Witold Luniewski was Marianna Dolińska’s doctor. He presented photographs to illustrate the consequences of Marianna Dolińska’s illness. 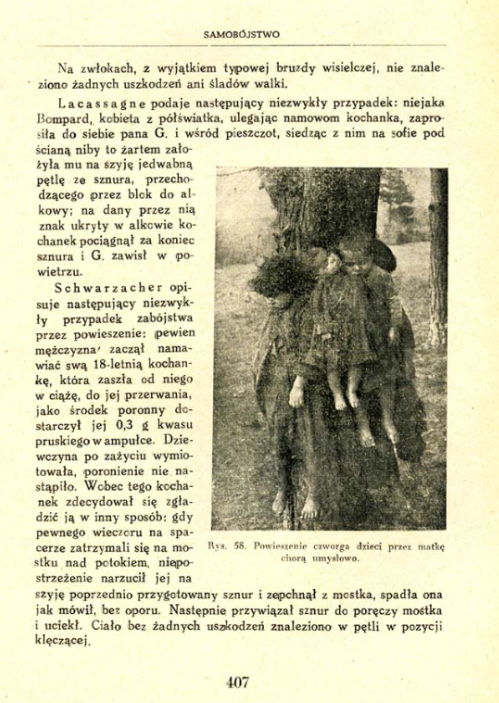 On July 2nd, 1941, the same photo appeared as an illustration of an article by “Nowy Kurier Warszawski.” According to the article, the photo depicted the family of a Polish village commander who had fled the Bolshevik regime, and his family was brutally murdered by the Bolsheviks. The article was published in a Nazi newspaper ten days after Nazi Germany’s attack on the Soviet Union.

Eight days later, on July 10th, 1941, an underground Polish newspaper responded to the article, explaining that the photo had nothing to do with the barbarism of the Soviet Union but depicted a murder committed by a mother with a mental health problem and was from the Department of Forensic Medicine.

The second photo of the tragedy was published for the first time in 1948 by prof. Wiktor Grzywa-Dąbrowski’s book “Criminalistics Guide for Students and Doctors.” However, it became popular half a century later, in 1993, when the Wroclaw newspaper Na Rubieży published evidence of the 1943 UPA genocide in Volhynia. The photo was published in the newspaper with the following description: “Polish children martyred and murdered by the UPA unit near the village of Kozowa, in the Tarnopol province.”

In 1994, the same photo was published in the book “National Army in the South and East Suburbs of Lviv” by Jerzy Wengerski. The photo, this time, was linked to the killing of Polish children by an SS-Galician unit.

In 2003, amateur historian and documentary filmmaker Alexander Corman used the wrong description for the album cover. The photo album was about the Polish victims of the Ukrainian rebel army – UPA. 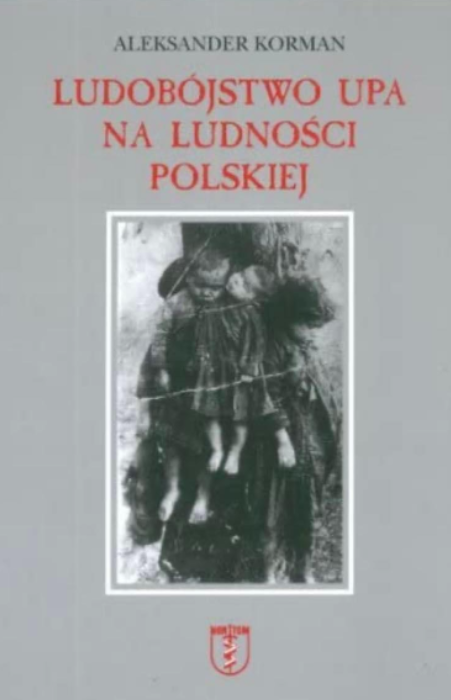 For more information about Stepan Bandera, see the article by “Myth Detector:”