Why is the coronavirus not lab-made? 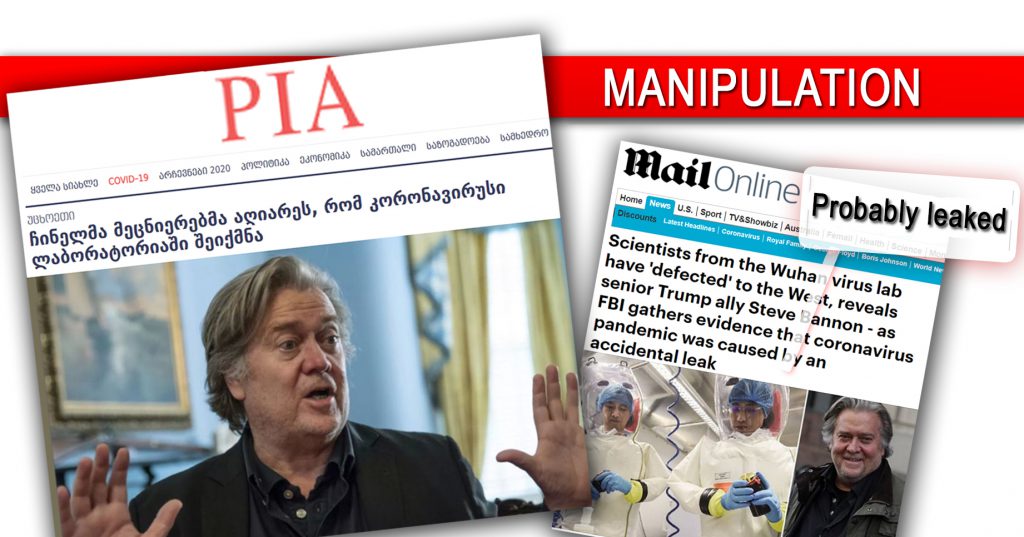 On July 13, PIA news agency published an article titled “Chinese Scientists Confess to Making the Coronavirus in Lab”. It mentions that Chinese scientists from the Wuhan Laboratory left the country and began cooperating with Western security services. As PIA writes, Steve Bannon, the former Senior Counselor to Donald Trump, stated this in his interview with the Daily Mirror. The article also mentions that according to Bannon, the Chinese scientists are not yet making statements in the media, however, they have evidences of a connection between the Communist Party of China and the origin coronavirus.

The article by PIA is manipulative as the Chinese scientists have not publicly stated that the coronavirus is lab-made. Steve Bannon has not said it either.

Snopes has published verified information on the alleged lab-made nature of COVID-19.

While conspiracy theories about the alleged lab-made nature of the coronavirus are being actively disseminated, the majority of scientists that studied COVID-19 agree that it has been formed naturally and moved from an animal – probably a bat – to the humans.

The reasoning behind this opinion is the genetic composition of the virus, its evolution history, and the studies conducted on bats.

Approximately 60% of the infectious diseases and 75% of new or re-emerging diseases come from animals. SARS-COV-2 is the newest from those seven coronavirus diseases that have been discovered among humans and that have spread from an animal, such as bat, mouse, or domestic animals. Bats were the origin of diseases such as Ebola, Rabies, Nipah, Hendra, Marburg, and influenza A viruses.

The genetic composition, or genome, of the new coronavirus has been studied and publicly shared by scientists all around the world. If the virus had been created in the laboratory, there would under any circumstances be a trace of genetic manipulations in the genome, however, it has not been found. It is very unlikely that the virus has been created using some technology that left no genetic trace, such as particles of a specific DNA code, at all.

The SARS-CoV-2 genome is similar to that of other bat coronaviruses, as well as those of pangolins, all of which have a similar overall genomic architecture. Differences between the genomes of these coronaviruses show natural patterns typical of coronavirus evolution. This suggests that SARS-CoV-2 evolved from a previous wild coronavirus.

It is very likely that the people carrying the disease accidentally disseminated the virus in Wuhan and on the wet market that increased the chances of getting infected due to enclosed, busy conditions. This includes the possibility of one of the scientists involved in bat coronavirus research in Wuhan unknowingly becoming infected and bringing the virus back from where their subject bats lived. This would still be considered natural infection, not a laboratory leak.

What did Steve Bannon say in his interview?

An article about the interview of the Daily Mail with the former White House Chief Strategist and the Editor-in-Chief of an ultra-nationalist edition Breitbart, Steve Bannon, mentions that the coronavirus spread due to a leak from the laboratory and security services are carrying out certain investigations. Based on this investigation, they obtained evidences from the scientists, who fled China, about the possible complicity of the Government of China.

Bannon think that “what you are going to find out is that these guys were doing experiments which they weren’t fully authorised [for] or knew what they were doing and that somehow, either through an inadvertent mistake, or on a lab technician, one of these things got out. It’s not that hard for these viruses to get out. That is why these labs are so dangerous.”.