Why does the Austrian Doctor Abstain from Sharing Confidential Information? 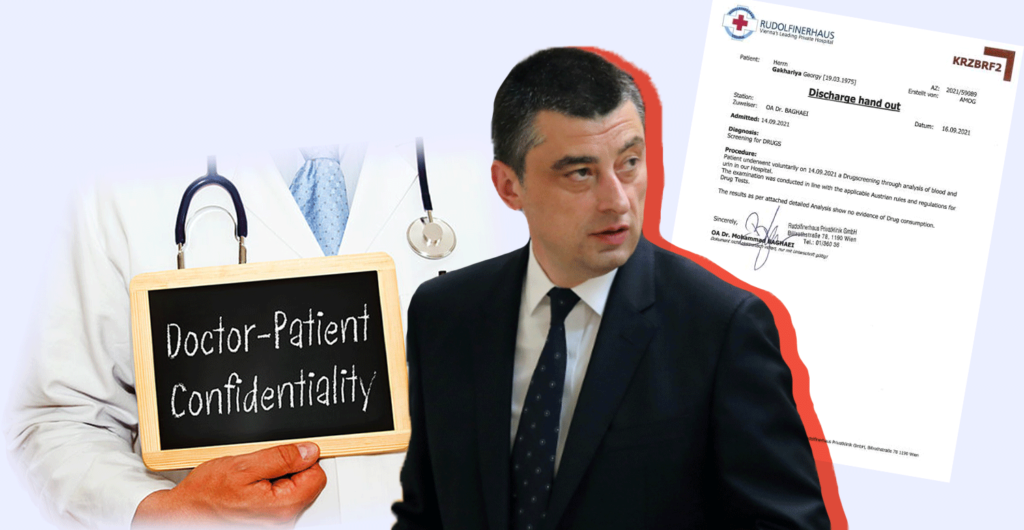 In response to a challenge from the ruling “Georgian Dream” party to conduct a pre-election drug screening, former Prime Minister and Tbilisi mayoral candidate Giorgi Gakharia stated that not to embarrass local forensics, he would take the screening in a foreign laboratory. On September 17th, on his personal Facebook page, Gakharia shared the results of an examination conducted at the RUDOLFINERHAUS hospital in Vienna, stating that the use of drugs has not been confirmed. 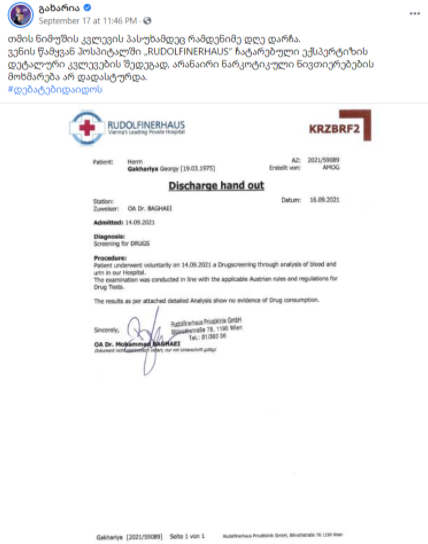 On September 22nd, “Imedi TV” responded to Giorgi Gakharia’s post with a journalistic experiment. In Vienna, a journalist proclaimed that Rudolfinerhaus does not provide a drug screening service. She also asked Dr. Mohammed Baghei – the name indicated in a report published by Gakharia – about the drug screening in the street. The doctor responded to the journalist that the patient’s information was confidential and would not answer any questions.

Apart from “Imedi TV,” On September 18th, POSTV has contacted RUDOLFINERHAUS, claiming that the clinic has confirmed that Dr. Muhammad Baghei is working as a neurologist at the hospital to treat depression, fatigue, dementia, and memory loss. However, the clinic has no information on whether Dr. Baghei has the competence to conduct drug screening. 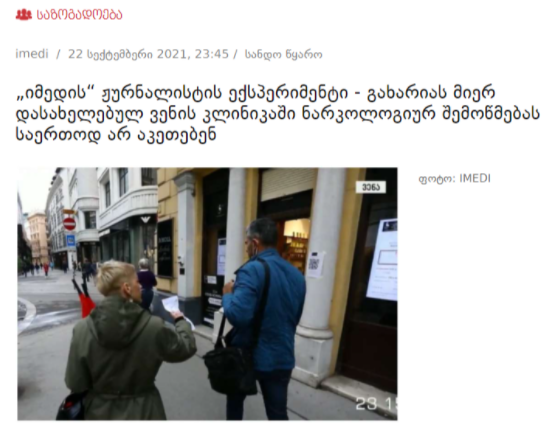 The story of “Imedi TV” tries to question the credibility of Giorgi Gakharia’s drug screening; however, the argument is not accompanied by relevant evidence, which would call into question the document published by the former prime minister. It should be noted that the clinic RUDOLFINERHAUS has an on-site lab that conducts any laboratory analysis and diagnostics, and the clinic’s, as well as the doctor’s avoidance of answering questions from a journalist, is due to the obligation to protect the confidentiality of the patient.

RUDOLFINERHAUS is a private hospital in Vienna that has been operating since the late 19th century. The clinic is multidisciplinary and provides patients with the following types of medical services:

The hospital’s website also states that they offer patients comprehensive diagnostics and general surgery and a wide range of medical services such as ophthalmology, dermatology, plastic and reconstructive surgery. According to the information provided on their website, the hospital has an on-site lab that conducts any laboratory analysis and diagnostics and provides results within 1-2 hours.

Although Giorgi Gakharia published the answer to the screening on social media, this does not release the doctor from the obligation of confidentiality and adherence to rules, which, on the one hand, are provided by Austrian Law, and on the other hand, by the internal regulations of the hospital. Therefore, the behavior of Dr. Mohammed Baghei, who does not respond to the “Imedi TV” journalist, is not unusual at all, nor does he claim that he did not provide Gakharia with a drug screening result.

What Confidentiality Rules Apply in Austria?

According to paragraph 16 of the Vienna Hospital Act 1987 (KAG – Wiener Krankenanstaltengesetz), hospital staff must maintain the confidentiality of persons with whom they have contact during their work. The obligation applies not only to the patient’s state of health but also to any other type of information, be it social, political, or economic.

According to the Act, the hospital only reserves to disclose information only about whether the patient was present at the clinic, only if that information is based on the patient’s personal interests.

The General Terms of Service of Rudolfinerhaus Hospital state that the hospital is subject to the duty of confidentiality in accordance with the KAG. Nonetheless, the patient may authorize the hospital to provide the social and private supplementary insurances with the necessary information, particularly for obtaining the cost assumption declaration and billing – including sending copies of the medical history and the findings. Therefore, it is safe to assume that the hospital will not disclose any information without the patient’s consent.

In addition, according to the Austrian Law (2018 Personal Data Protection Law), everyone is entitled to the right to privacy of their personal information. As for the sharing of personal data of individuals by organizations to “third parties,” according to the law, this is allowed only after the person fills out a particular form of consent.

It should also be noted that the EU General Data Protection Regulation (GDPR) obliges individuals and organizations that store and process personal information to ensure the protection and confidentiality of information.