Why does Inashvili Fail to See Russia’s Responsibility in ECHR Judgment? 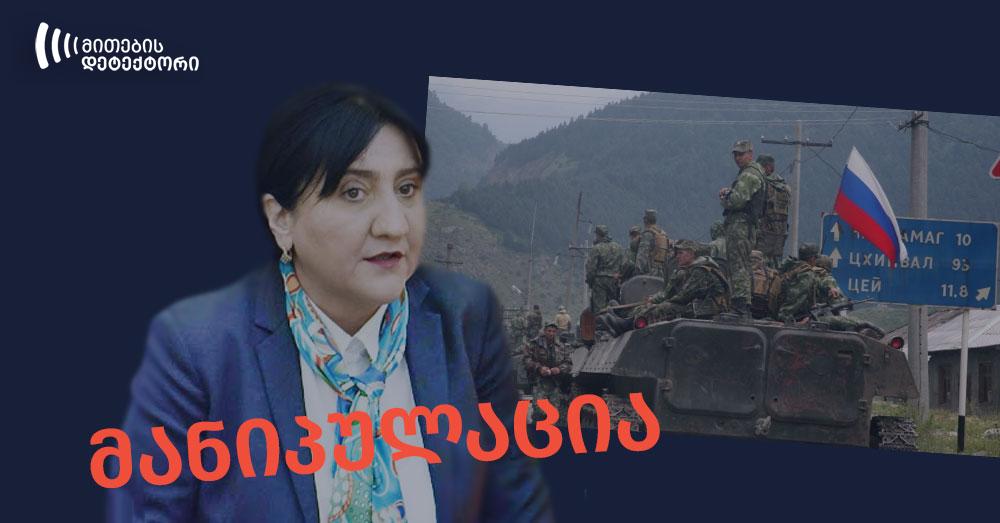 On June 13, Obieqtivi TV aired the seventh episode of TV program “Studio Number 8” hosted by Irma Inashvili, leader of the Alliance of Patriots party, where she talks about the judgment delivered by the Strasbourg-based European Court of Human Rights (ECHR) into Georgia vs. Russia case on January 21, 2021. Inashvili claims that the European Court did not recognize Russia as the party to the August 2008 war and instead, deemed Georgia and South Ossetia to be the conflicting sides.

Irma Inashvili, Alliance of Patriots: “The Strasbourg court ruled on January 21, 2021 that the 2008 war was a conflict between Georgian and South Ossetian armed forces… Although the Strasbourg court imposed a EUR 10 million fine on Russia citing that its troops did not withdraw from the territory of Georgia after the cessation of the hostilities, i.e. on August 12, and were violating Georgian citizens’ rights, I think that the EUR 10 million fine is unlikely to overweigh a huge failure of Georgian diplomacy… Saakashvili-Bokerias, Georgian Dream leaders, experts and TV channels supporting them had been unanimously concealing that the Strasbourg court did not recognize Russia as the party to the 2008 war.”

On June 17, this fragment of the program was uploaded on Facebook page “კონსერვატორი” (Conservative) with the following caption: “How Georgian people were deceived.” 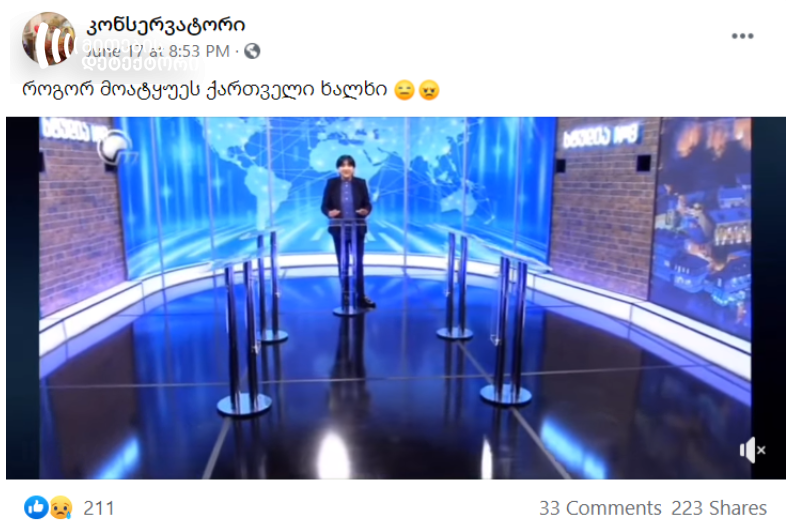 Inashvili’s claim as if the European Court of Human Rights ruled that the 2008 war took place between Georgia and South Ossetian troops and that it did not recognize Russia as the party to the conflict is manipulative. The court, actually, separated the period (August 8-12), when Russia could not exercise effective control over the territory and post-August 12 developments, when the Russian Federation’s responsibility had been evident in the occupied regions. The ECHR found Russia guilty of committing a number of crimes in August 2008. As for the EUR 10 million fine, it was imposed on Russia in 2019 in compensation for damages related to mass deportation of Georgian nationals from Russia in 2006 and it has nothing to do with the August war.

Georgia appealed the ECHR on August 11, 2008, while the formal inter-state application was filed on February 6, 2009. The European Court delivered its judgment into Georgia vs. Russia case on January 21, 2021. In its judgment, the court expressly pointed at Russia’s responsibility, when it asserted that since August 12, 2008, “strong Russian presence and the South Ossetian and Abkhazian authorities’ dependency on the Russian Federation indicated that there had been continued “effective control” over South Ossetia and Abkhazia.”

Irma Inashvili manipulates the part of the judgment, which is related to the active phase of the August 8-12, 2008 war and the events following the ceasefire agreement of 12 August 2008, as well as separation of these periods from each other that has nothing to do with neglecting Russia’s responsibility.

The video uploaded by Facebook page “Conservative” ends with a message: “Strasbourg: Russia was not directly involved in the August 2008 war and it only interfered illegally following August 12. See a screenshot of the document.” The message is followed by a screenshot covering a fragment from the court judgment, according to which during the active phase of hostilities from 8 to 12 August 2008, Russia could not be considered as exercising “effective control.” Thus, the court declared inadmissible the part of Georgia’s application, which claimed that Russia was legally responsible for the acts committed on 8-12 August. 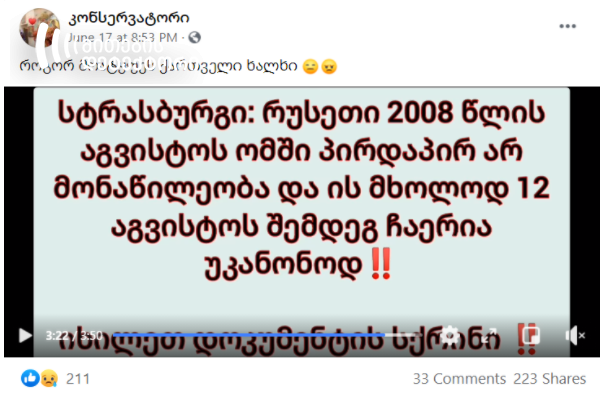 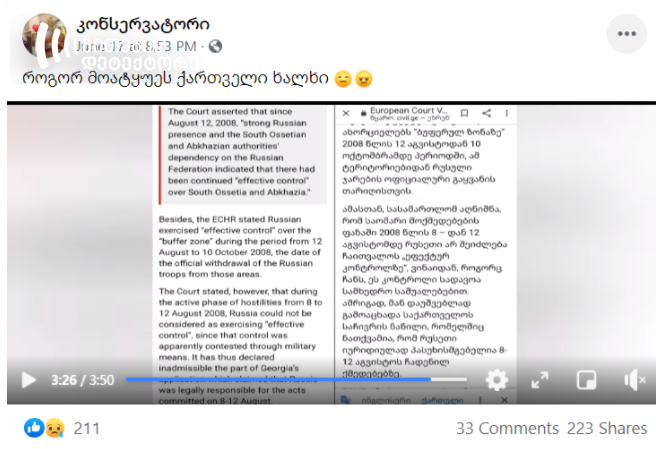 Irma Inashvili also refers to fining Russia for the acts committed after August 12.

In fact, the court ruled that clashes between the armed forces were chaotic on August 8-12 and there was no “effective control.” Thus, the issue of any state agent authority on the territory of hostilities was ruled out and the court found that the events of that period did not fall under Russia’s jurisdiction.

It is noteworthy that the judgement does not state that the war took place between Georgia and South Ossetia. The interpretation claiming that since Russia had no “effective control” over the territory of hostilities, it did not participate in the war is manipulative.

The court clarifies that the military operations, including bombing, shelling, armed attack and so on during an international conflict cannot be deemed as having effective control over the territory. The court concludes that during the active phase of the international armed conflict, Russian troops tried to impose effective control over part of Georgia through bombing and artillery attacks. Thus, the court deemed Russia’s actions beyond its own territory as the participation in the international armed conflict.

In addition, the court also concluded that Russia as the respondent State did not provide any proof and did not carry out an effective investigation not only into the events which occurred after the cessation of the hostilities but also into the events, including those relating to killings, that occurred during the active military operations in the period of 8 to 12 August 2008.

The court ruled that Russia had an effective control over Tskhinvali Region, Abkhazia and so called “buffer zone” from 12 August 2008 to 10 October 2008. Despite Russian troops’ official withdrawal, their presence on the territory and local authorities’ subordination to Russia means that Russia maintains effective control over them. Thus, the events fall under Russia’s jurisdiction and the entire responsibility is placed just on this country.

The court found that the torching and looting of houses in the Georgian villages situated in the conflict zone, as well as inhuman and degrading treatment of civilians, including on ethnic grounds, could be deemed to be “official tolerance” by the Russian authorities.

The ECHR ruled that Russia violated several articles of the European Convention on Human Rights, involving the right to life, respect for private and family life, protection of property and prohibition of torture.

The ECHR noted that 160 Georgian civilians, most of them elderly and a third of them women, were detained by South Ossetian forces in the basement of the “Ministry of Internal Affairs of South Ossetia” in Tskhinvali between around 10 and 27 August 2008. They were subject to inhuman and degrading treatment. The court clarified that even if the direct participation of the Russian forces had not been clearly demonstrated, the latter had been responsible for the actions of the South Ossetian authorities, because it did not take relevant measures to prevent such incidents.

The ECHR ruled that the Georgian prisoners of war detained in Tskhinvali between 8 and 17 August 2008 by the South Ossetian forces had fallen within the Russian legal responsibility. And again, even if the direct participation of the Russian forces had not been clearly demonstrated, the court clarified that the prisoners of war fell within the jurisdiction of the Russian Federation, as the latter was responsible for the actions of the South Ossetian forces and did not intervene to prevent torture.

After delivering its judgement, the ECHR will separately consider the issue of affording just satisfaction to the injured parties and decide whether to impose payment of compensations on Russia. The parties have to present their positions within a year. As for the EUR 10 million fine mentioned by Irma Inashvili, the Court imposed it on Russia in 2019 in compensation for damages related to the mass deportation of Georgian citizens from Russia in 2006.

Thus, the claim as if the Strasbourg-based court did not recognize Russia as the party to the 2008 war is false.

Members of the Alliance of Patriots party, as well as other actors directly or indirectly affiliated with the Kremlin had been actively spreading manipulative information and the Russian government narratives about the ECHR decisions in the past as well. See details in Myth Detector’s article:
“Georgia v. Russia – who won for whom in Strasbourg?

Facebook page “Conservative” was created on June 7, 2021. The page uses the photo of Bishop Spiridon as its profile picture and notes in its ‘About us’ section that “liberalism should come to an end.” The page frequently shares Alt-Info’s and Levan Vasadze’s videos. The page is linked to Facebook group “მრწამსი მართლმადიდებელი”.