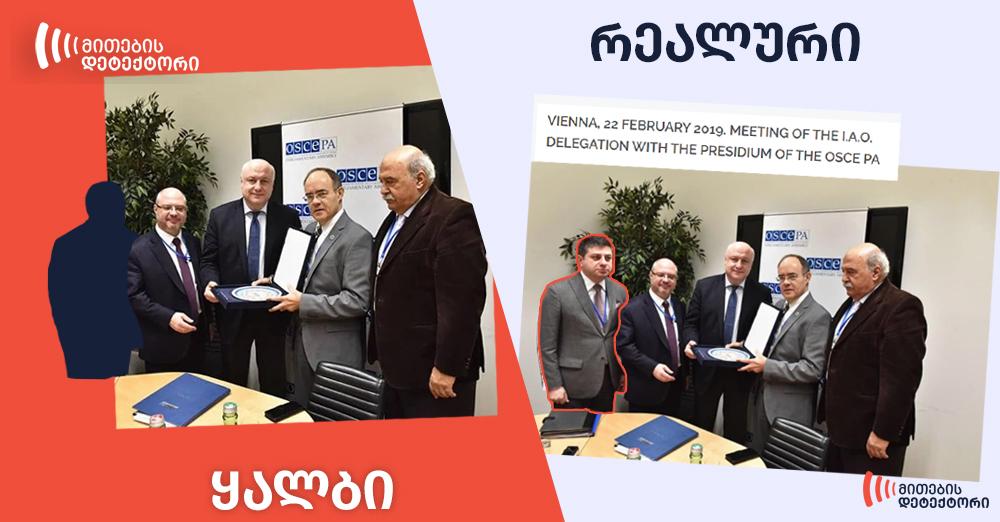 On September 16, at 10:20, pro-Georgian Dream Facebook page “ლიდერი 41” (Leader 41) published a photo, showing Gigi Tsereteli of the opposition European Georgia party along with Russian MP Sergei Gavrilov and other persons. The page notes that the meeting was held in the OSCE format on April 22, 2019 and that the Gavrilov case was “a provocation staged by the National Movement.”

According to CrowdTangle, besides Leader 41, the same photo was shared by other, mainly pro-government propagandistic pages as well as Nino Nebieridze, a fake account, which steals the identity of vkontakte.ru user, Катя Родина and whose involvement in the campaign aimed at discrediting the opposition was covered by Myth Detector in its earlier articles.

The photo involved the message about the opposition’s alleged links with Sergei Gavrilov. 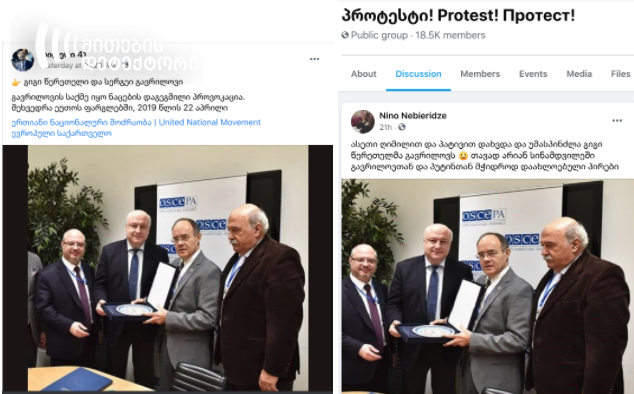 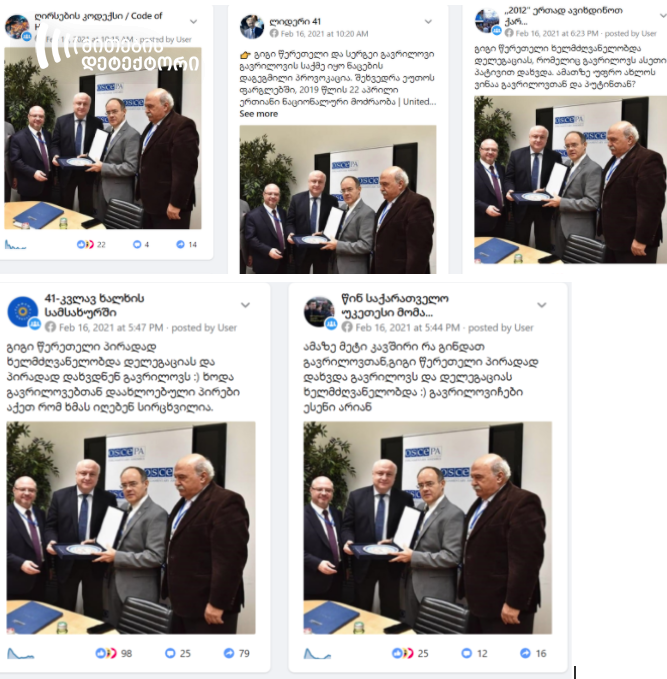 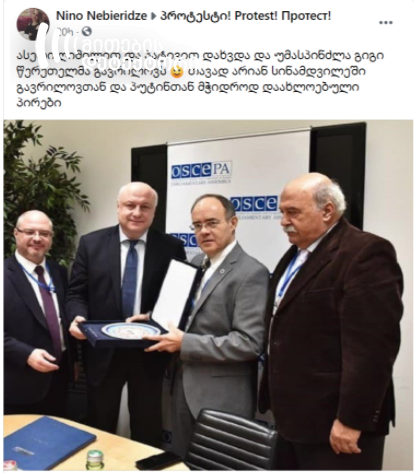 The viral photo is manipulative, because it is being spread without Zakaria Kutsnashvili of the ruling party who has been cut out from the photo to leave an impression that Gigi Tsereteli of European Georgia has close ties with Russian MP Sergei Gavrilov. In fact, Gigi Tsereteli met with Gavrilov in his capacity of the President at the OSCE Parliamentary Assembly, and the Secretary General of the OSCE PA also attended the meeting. The photoshopped photo was spread by pro-government pages in a coordinated manner, leaving an impression that not Georgian Dream but rather the opposition is affiliated with Russian State Duma’s Communist MP.

Who is missing from the photo?

The Inter-parliamentary Assembly on Orthodoxy (IAO) published the same photo on its website, noting that the meeting was held in Vienna on February 22, 2019 in frames of which President of IAO and Russian MP, Sergei Gavrilov met with OSCE PA President Gigi Tsereteli and Secretary General Roberto Montella. Former Georgian Dream lawmaker, Zakaria Kutsnashvili also participated in the meeting; however, he has been cut out from the photos spread by the ruling party supporters on Facebook. 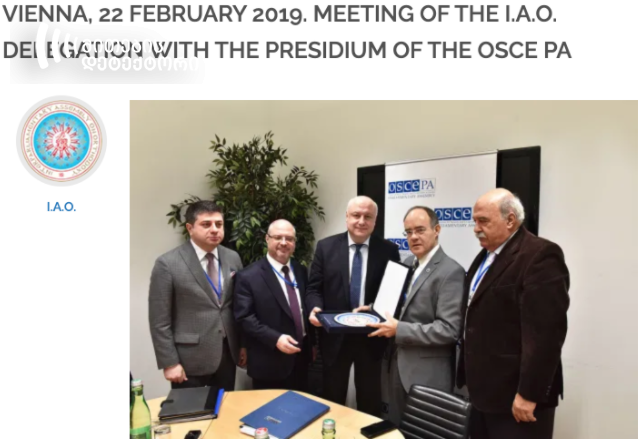 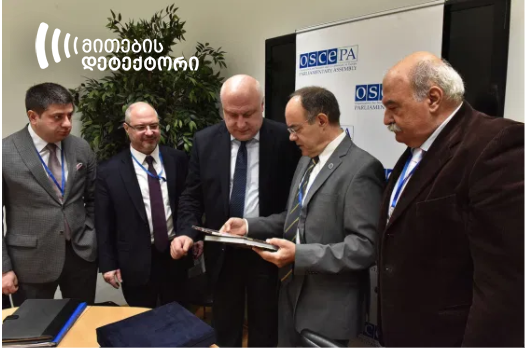 In 2017, the Member of the Parliamentary Delegation to OSCE PA, Giorgi Tsereteli was elected as the President of OSCE PA. Later, Tsereteli was re-elected and he served on the post until 11 December 2020.

Since Tsereteli had to meet with Gavrilov in Vienna in his capacity at the OSCE PA President, linking Gavrilov to the Georgian opposition is manipulative that is further backed by the fact that Zakaria Kutsnashvili had been cut out from the photos.

A session of the Inter-parliamentary Assembly on Orthodoxy (IAO) opened in Tbilisi on June 19, 2019, with Sergei Gavrilov, President of IAO, addressing the delegates in Russian from the Georgian Parliament Speaker’s seat. This fact caused strong outcry among the parliamentary opposition and triggered protests outside the Parliament that ultimately resulted in violent overnight dispersal of the rally by police. Due to this fact, the June 20-21 developments were dubbed as “Gavrilov’s night” that later grew into anti-occupation protests.

To counter the opposition’s criticism and the society’s negative reaction to Gavrilov’s visit, the ruling party itself uses Gavrilov’s issue for discrediting its opponents:

Sergei Gavrilov is a member of the Communist Party and the Russian State Duma MP. He chairs the Committee on Issues of Public Associations and Religious Organizations. He focuses on religious issues. Gavrilov also is a coordinator of the inter-faction parliamentary group for the protection of Christian values.

Gavrilov recognizes Georgia’s occupied regions as independent states, justifies Russia’s annexation of Crimea, as well as Bashar al-Assad’s use of chemical weapon against the population in Syria.