Why did the President amend the healthcare law and what meetings are depicted in the photos of Zurabishvili? 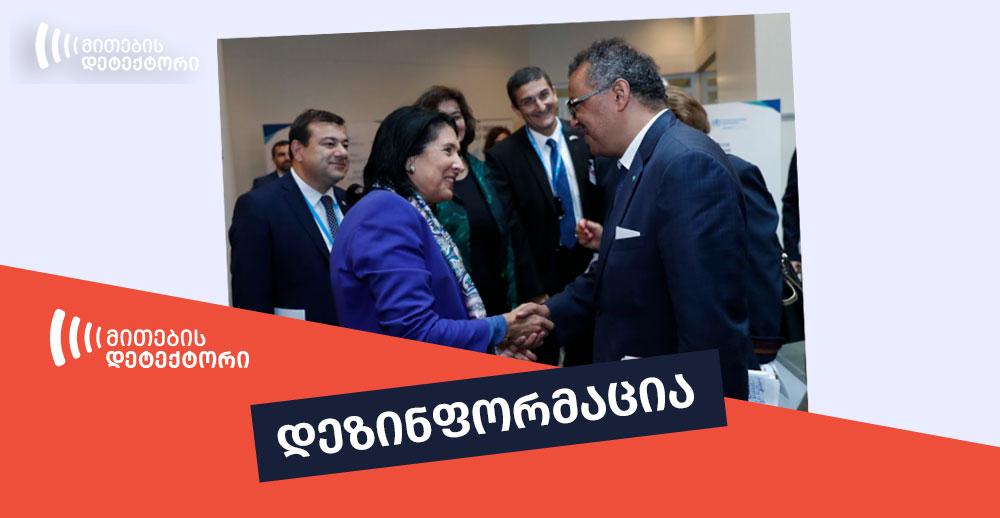 On April 7, Facebook account Lasha Modebadze published the post stating that the president of Georgia, Salome Zurabishvili introduced amendments to the healthcare law in April 2019, and the pandemic spectacle started at the end of 2019. Attached to the post is the screenshot of the April 2, 2019 amendments to the Law on Public Health.

On April 8, an identical photo with similar content was published by the account Nina Marji. The latter writes that it’s unerring evidence of the Georgian government selling off its population and continuing their genocide. On April 8, the account Ramaz Gagnidze shared Lasha Modebadze’s post with the following comment: “Are you aware of this world spectacle that Salome Zurabishvili, Bidzina Ivanishvili, and GD-NM government knew in advance from the WHO?!”

On April 8, Lasha Modebadze published another post. In the latter, he yet again wrote about the amendments to the healthcare law and added that few months before the pandemic the Head of the U.S. Centers for Disease Control, Robert Redfield visited Tbilisi. Attached to the post are the photos he claims to have been taken from the U.S Embassy webpage.

The amendments to the “Law on Public Health”, as well as other photos attached to the posts are used manipulatively and in fact, have no connection to the coronavirus pandemic.

Amendment to the “Law on Public Health” that Salome Zurabishvili signed on April 2, 2019, implies the amendment to Article 12 (1) of the said law. Particularly:

Before the president signed it, the package of amendments had been submitted to the parliament as an initiative of the government of Georgia. Besides the amendment to the “Law on Public Health”, parliament had discussed similar amendments to other laws as well. In the 2018 activity report published by Procedural Issues and Rules Committee on March 13, 2019, it is said that the package of amendments was submitted to the parliament as an initiative of the government and explains that after the inauguration of Salome Zurabishvili, the new constitutional model came into force abolishing advisory body of the President of Georgia, the National Security Council. As a result, a strategic vacuum was created in the national security policy planning and coordination sphere, making the government the only coordinating organ. According to the document, the project’s objective was to establish a body be in charge of national security policy planning and coordination, increase efficacy of the national security and ensure information provision to Georgia’s Prime Minister in regards to decisions on matters of the highest degree.

On February 13, 2019, Parliamentary Defense and Security Committee session reviewed the previously mentioned issue. In the session, it was noted that creating a national security council as an advisory body of the head of the state is expedient. According to the law on Public Safety, currently, in the state of emergency that entails pandemics, the Prime Minister of Georgia makes decisions based on the recommendations from the National Security Council. Apart from PM, permanent members of the council are Minister of Defense, Minister of Internal Affairs, Minister of Foreign Affairs, and Minister of Finances, head of the State Security Service, head of the Counter-Intelligence Agency, and the head of Georgian Armed Forces. It is the Prime Minister’s discretion to invite the president and other individuals to the meetings of the Council for information provision. The amendments to Article 12 (1) have been done before more than once. For example, under the presidency of Giorgi Margvelashvili, the predecessor of Salome Zurabishvili. The amendments signed on May 29, 2014, are following: “Epidemic and pandemic that poses a great threat to public health belongs to the state of emergency, whose management is coordinated by the Prime Minister of Georgia on the basis of recommendations and proposals from the State Security and Crisis Management Council in accordance with the law on “Public Safety” of Georgia”

However, on December 15, 2017, per the ordinance of Giorgi Kvirikashvili, then Prime Minister of Georgia, the above-mentioned Security and Crisis Management Council was abolished pushing forward the necessity of the amendment to the law again. Therefore, the amendments to Article 12 of the “Law on Public Health” have no connection to the coronavirus pandemic. Such amendments are caused by structural changes in the body of the government.

As an additional argument to prove that the pandemic was pre-planned and the Georgian government was aware of it in advance, Lasha Modebadze provides photos that depict official meetings held at different times.

Photos depict the Director of the U.S Centers for Disease Control and Prevention (CDC) – Robert Redfield’s visit to Georgia in May 2019 that aimed to provide information on the results achieved within the long-term cooperation between Georgia and CDC. According to the MoH’s statement on the issue, CDC first launched activities in Georgia in the mid-1990s. In 2009, CDC/South Caucasus Regional Office was launched in the building of the National Center for Disease Control and Public Health, which aimed to provide a Field Epidemiology and Laboratory Training Program (FELTP) to epidemiologists and Healthcare officers from Georgia, Azerbaijan, and Armenia. The objective of the program was to enhance public healthcare capability in terms of overseeing human and zoonotic diseases and responding to disease outbreaks. According to the ministry, activities of the CDC in Georgia include the following spheres: Hepatitis, Flu, Zoonotic, Respiratory and Diarrheal diseases, Tuberculosis, Nutrition, sexually transmitted diseases, etc. In the statement, it is said that the support of the CDC is extremely important in order to start and execute the program of eliminating Hepatitis C. The progression of the aforesaid program was one of the main topics of discussion during Redfield’s visit. His meeting was not connected to coronavirus, since in this period a case of coronavirus infection in humans was not revealed at all yet.

The photo, where Salome Zurabishvili and the general director of the National Center for Disease Control, Amiran Gamkrelidze, are shown together with the director of the World Health Organization, Tedros Adhanom Ghebreyesus, was taken at the WHO regional office’s 69th session held in Copenhagen in September 2019. During the session, there was no talk about the coronavirus, the first infection case of which was not detected until November-December of 2019. The main points of discussion were global health topics and the matter of elections of the head of the World Health Organization’s regional office. 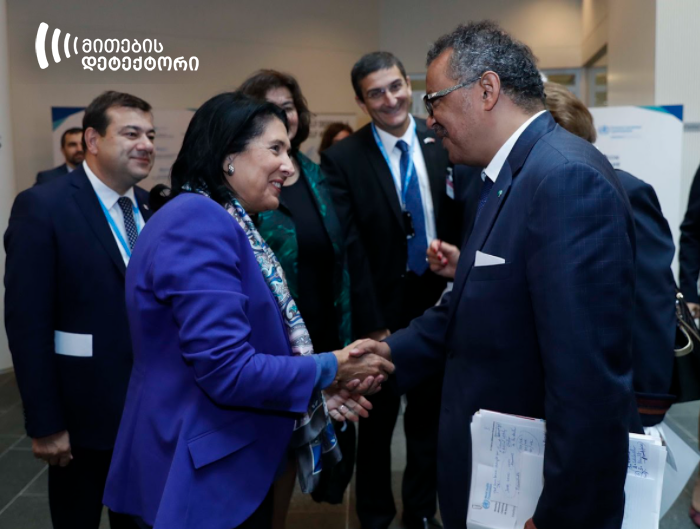 “Here [Lugar Lab] we are in Europe and we are here, in Europe, with the help of the U.S. The great work is in progress and I would like to thank all who work here and address those who spread fake news – they should come to visit, see how it works and understand how false is the information coming from our neighbor states and one big neighbor. This information directly aims to harm [our] state and to not get things done” – Stated Zurabishvili during her visit.

Read more about the Russian disinformation on Lugar Lab in the past articles prepared by “Myth Detector”: