Why did the nurse pass out after receiving the Pfizer vaccine? 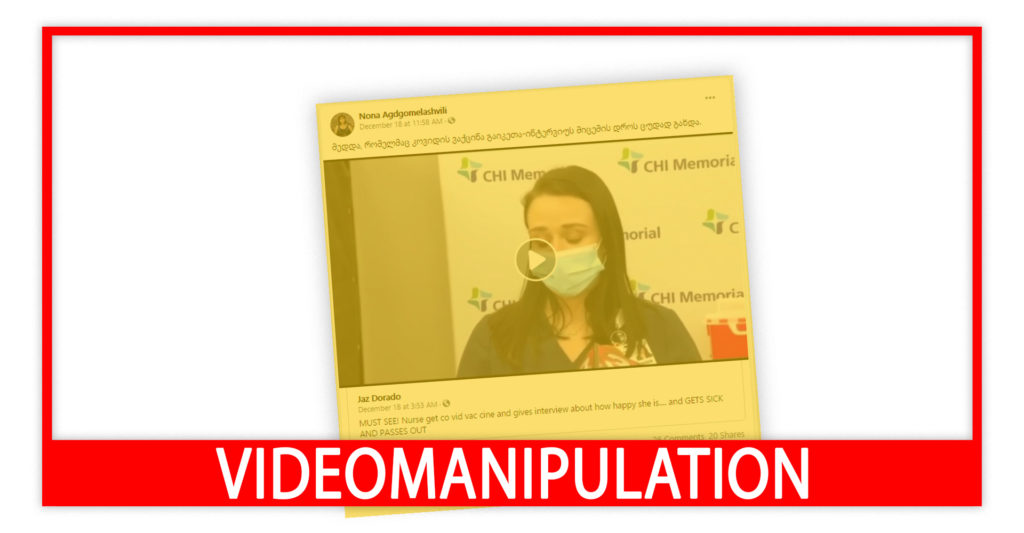 On December 17, Facebook profile Nona Agdgomelashvili shared the video published by Jaz Dorado. Jaz Dorado’s description of the video is in English and notes that the nurse passed out after receiving the coronavirus vaccine. Aghdgomelashvili’s post is a Georgian translation of the primary source. 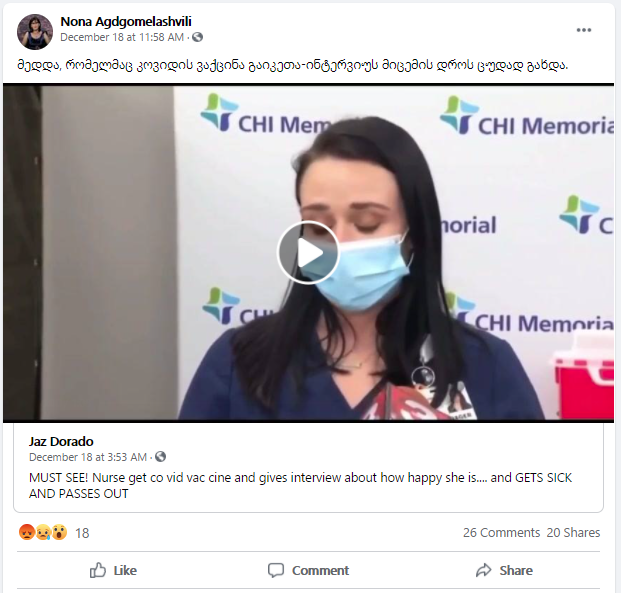 Video shows the nurse speaking to journalists and saying that she and her staff are excited to get the vaccine. Afterward, she touches her head saying she’s feeling dizzy, then she collapses and doctors go to help her.

Later, the former host of the program “დასაბამიდან სასუფევლამდე”  (From Origin to Death) Davit Giorgobiani shared the same video on his Facebook account. He published the video with the following description: “Nurse received luciferase vaccine in the U.S. and collapsed in a few seconds!”. 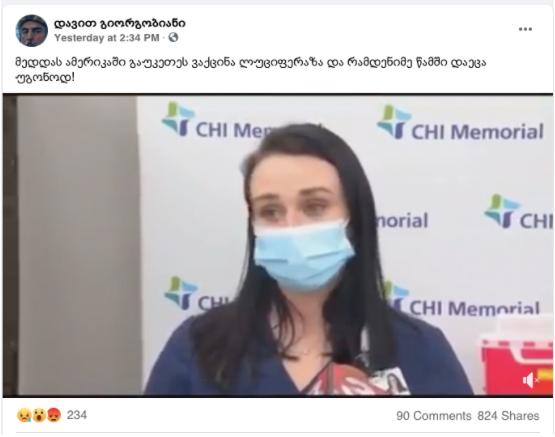 1. Disseminated video is manipulative and was spread without the context. Video is an incomplete fragment from WRCB TV’s story. In the full video, the nurse explains that she has an over-reactive vagal response and had often passed out even before. According to the information published on the CDC’s webpage, passing out after the vaccination isn’t uncommon and it’s usually caused by anxiety or pain. 2. Text attached to Davit Giorgobiani’s video, as if the luciferase vaccine was the reason why nurse passed out is disinformation because coronavirus vaccine doesn’t contain luciferin.

The primary source of the disseminated video is the U.S. WRCB TV also known as Channel 3’s December 17 story about five health workers receiving Pfizer vaccine at Memorial Hospital, Tennessee, One of those people is a nurse Tiffany Dover. Ten minutes after the shot, she became light-headed and passed out. Later, when she regained consciousness Ms. Dover explained to journalists why she passed out. As she notes, she has a history of having an over-reactive vagal response, and she had the same reaction on multiple occasions even before. She told journalists that she’s feeling better and no longer feels pain in her arm. 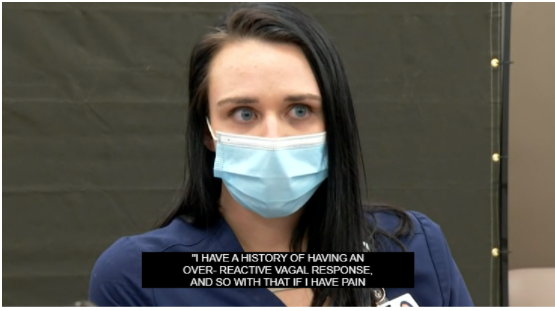 As newschannel9 writes, the doctors at Memorial hospital said that the fact that the nurse passed out is not related to the ingredients in the Pfizer COVID-19 vaccine.

In regards to fainting after the vaccination, the webpage of The Center for Disease Control (CDC) writes that it’s not uncommon and can happen after getting various types of vaccine. As for the cause, it is usually triggered by pain or anxiety.

Former host of the program “From Origin to Death” Davit Giorgobiani disseminated a video with another interpretation on his Facebook account and claimed that the reason why American nurse fainted was that she received the luciferase vaccine.

As “Myth Detector” has previously written, although luciferin and luciferase are harmless substances used in medicine for treatment purposes, the coronavirus vaccine itself doesn’t contain luciferin.  Luciferin and luciferase became the source of conspiracy because the name was equated with Lucifer. Luciferin got its name from the Latin word Lucifer and means the “light-bearing” however it’s also linked to the name of the devil, which was used for disseminating conspiracies in the anti-coronavirus vaccine campaign.
Read more: Luciferin – a dark conspiracy or a bright biochemical reaction?

Dissemination of the video in Georgia

Facebook profile Jaz Dorado’s video had 13 000 views and over 1000 shares 15 hours after the upload.  The video was also shared by Georgian Facebook users.

Facebook profile Sophia Kandelaki shared the video in the group ახალი მსოფლიო წესრიგი და კორონა აფიორა! (New World Order and Corona Hoax). Her post has 16 shares including one by the troll Lasha Modebadze. 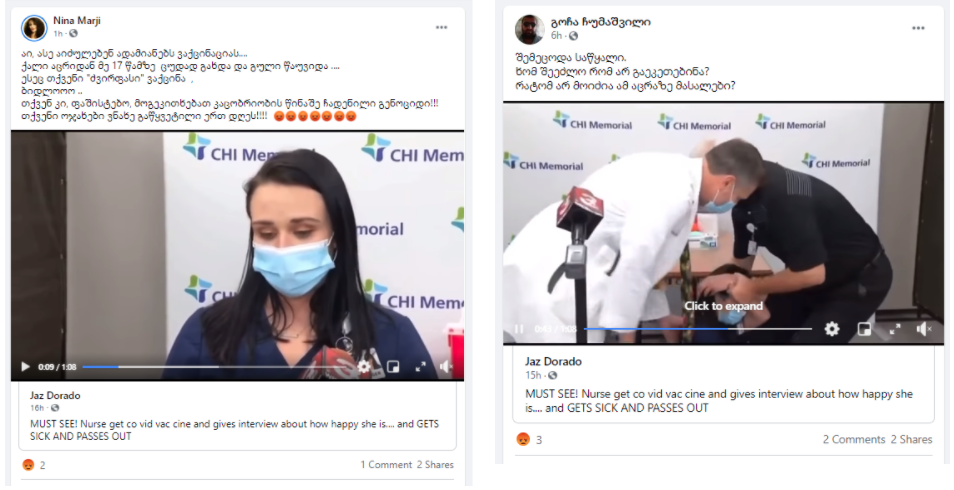 As of 13:00, December 20, the identical video uploaded by Davit Giorgobiani has 915 shares. 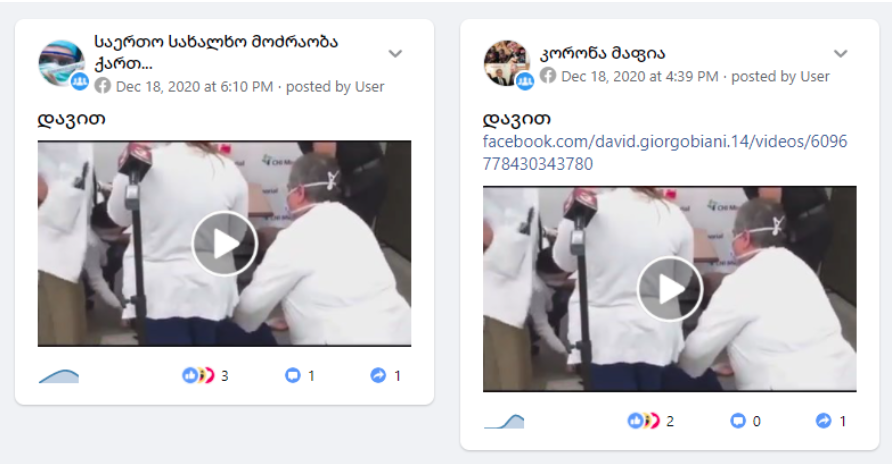