Who Thinks that the War Started on August 8? 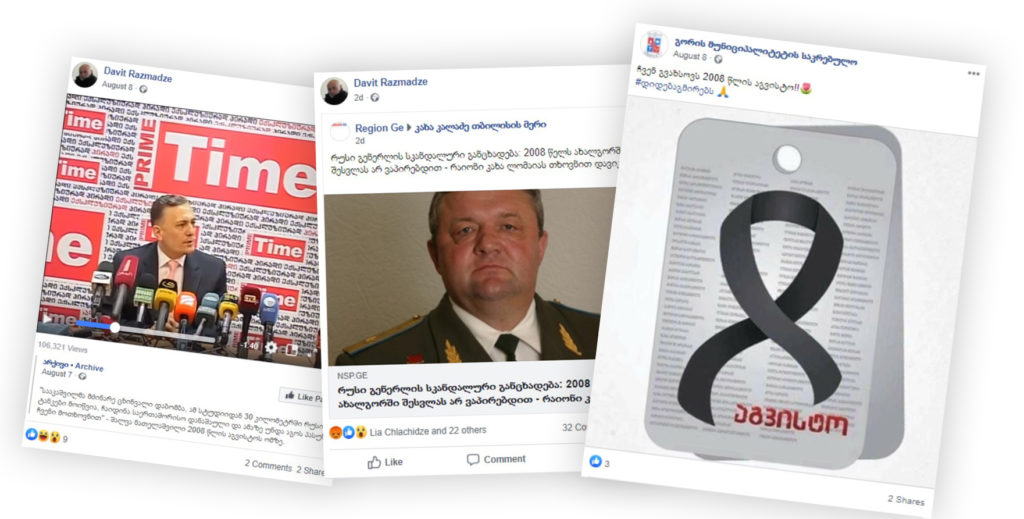 On August 7, 2020, exactly 12 years have passed since the start of the Russo-Georgian War. The debates regarding the starting date of the war still causes disagreements in the Georgian politics. Russian Army intervened in Georgia on August 7, 2020, starting the Russo-Georgian military confrontation, however, some Russia-affiliated actors try to legitimize August 8 as the starting date which is a Russian propagandist narrative and aims to accuse Georgia of starting the war. Numerous facts indicate that Russia started the war on August 7. This includes an interesting evidence in an article published by Kommersant Vlast on September 22, 2008. In the article, Denis Sidrist, the Head of the 135th Motorized Rifle Regiment within the 58th Army, says that they received the order to enter Tskhinvali on August 7 and that they did it indeed. The article was first edited and then completely removed from the website. 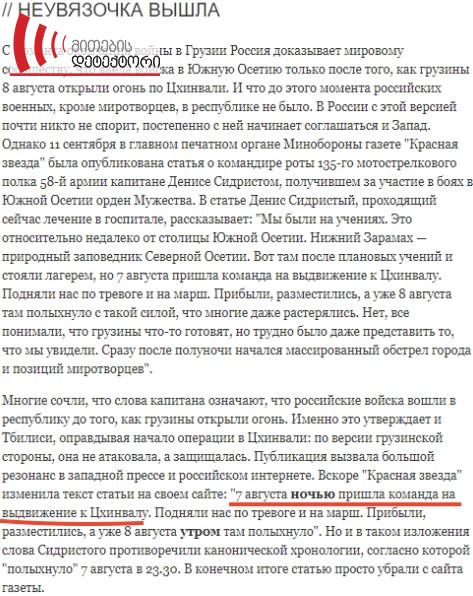 Myth Detector observed activities of public officials and political parties in the regions related to the start of the war on social media and found out that assessments regarding both the responsibility for initiating the war and the start date of the war varied – something that, to a certain extent, is related to the dates of the published posts and their content.

Parties and local self-government officials published unequivocal posts on Facebook regarding the starting date of the war. For instance, the Assembly of Gori Municipality published a poster that reads “August 8” with a caption “We remember August 2008!” 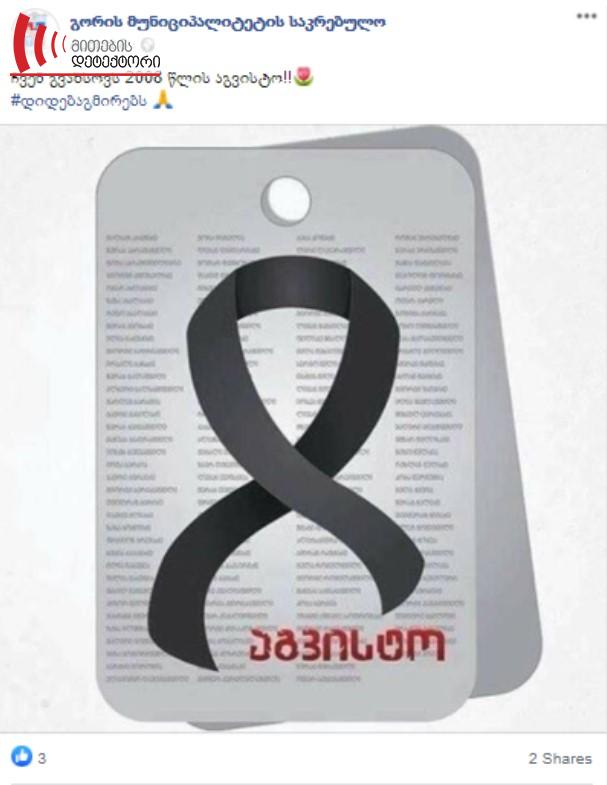 August 8 in the context of the Russo-Georgian War featured in a Facebook post by the Supreme Council of the Autonomous Republic of Adjara as well, which reads that “On a twelve-year-anniversary of the August 8, 2020 events, the war victims of the August War were remembered in Batumi”. 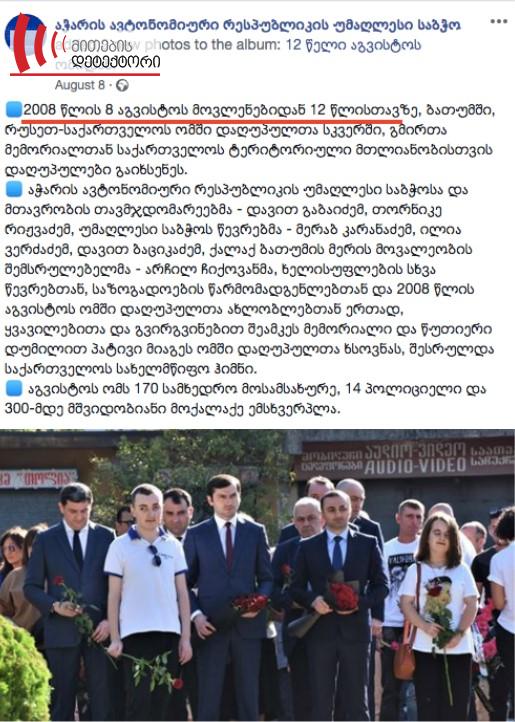 Who started the war?

In Shida Kartli, where the war theater unfolded in August 2008, not only does the starting date of the war remain debatable among public officials and politicians, but the question of who started the war, as well.

On August 8, 2020, Davit Razmadze, the Head of the Assembly of Gori Municipality, shared a video by a Facebook page „არქივი“ (Archive) in which Shalva Natelashvili speaks about the starting date of the war:

Shalva Natelashvili, Labour Party of Georgia: “Attack on Tskhinvali, the sleeping Tskhinvali, which is a Georgian city and where the citizens of Georgia lived and still live, and the initiation of the war that was doomed to be lost, as he (Saakashvili) knew well who would intervene and in what manner, was an international crime.” 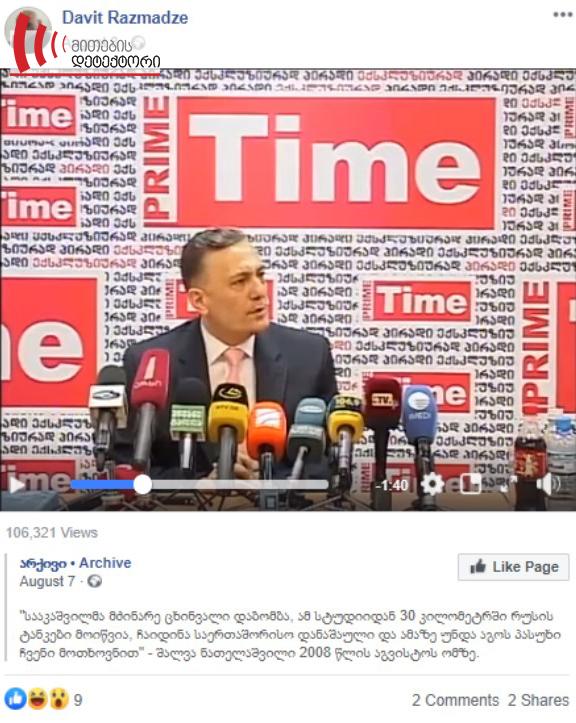 On August 15, Davit Razmadze also shared a post by a Facebook user Lasha Modebadze, which mentions an alleged agreement between Saakashvili and Putin about the start of the war. 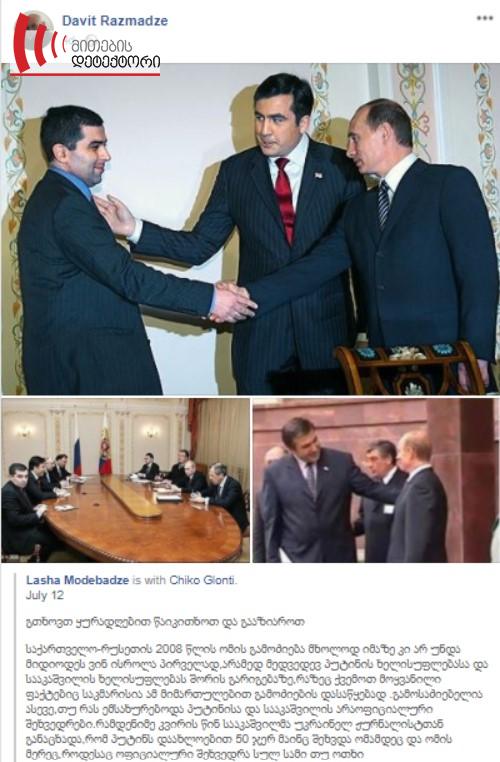 Giorgi Khojevanishvili, the majoritarian candidate of Gori and Kaspi from Georgian Dream – Democratic Georgia, accused Georgia of initiating the war as well. On August 8, on air at Georgian Public Broadcaster, he said:

Giorgi Khojevanishvili, Georgian Dream: “I believe that the country should not repeat this mistake. Our country is still reaping the ‘fruits’ of this mistake in the form of borderization.”

On August 17, through a Facebook group „კახა კალაძე თბილისის მერი“ (Kakha Kaladze the Mayor of Tbilisi), Davit Razmadze shared an article by Region.ge where a Russian general Vyacheslav Borisov recalls the August War and states that the Russian Army was not planning to occupy Akhalgori Municipality and only did so following a request by Kakha Lomaia.

It was Vyacheslav Borisov that led the Russian 58th Army’s invasion to Georgia and was the oe who commanded the military forces during the occupation of Gori. Kakha (Alexandre) Lomaia was the Secretary of the National Security Council of Georgia at that time. 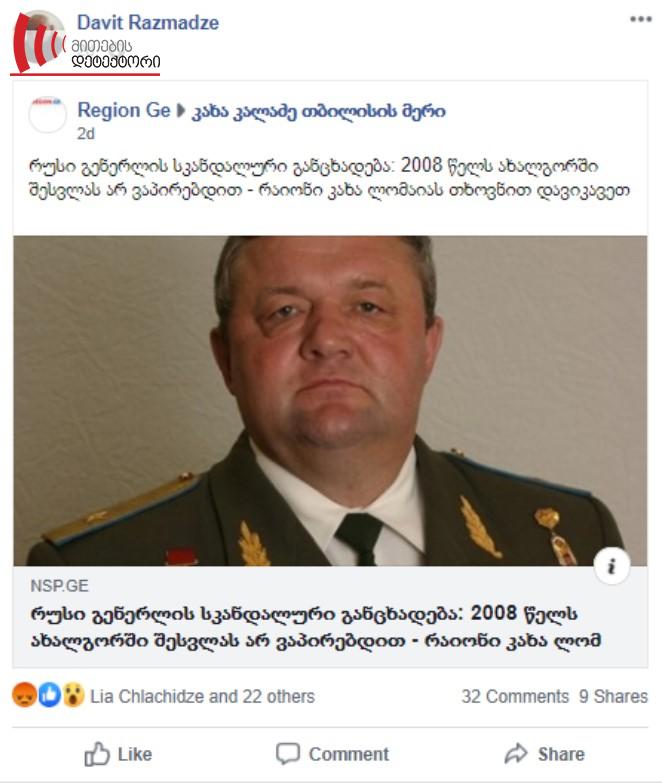