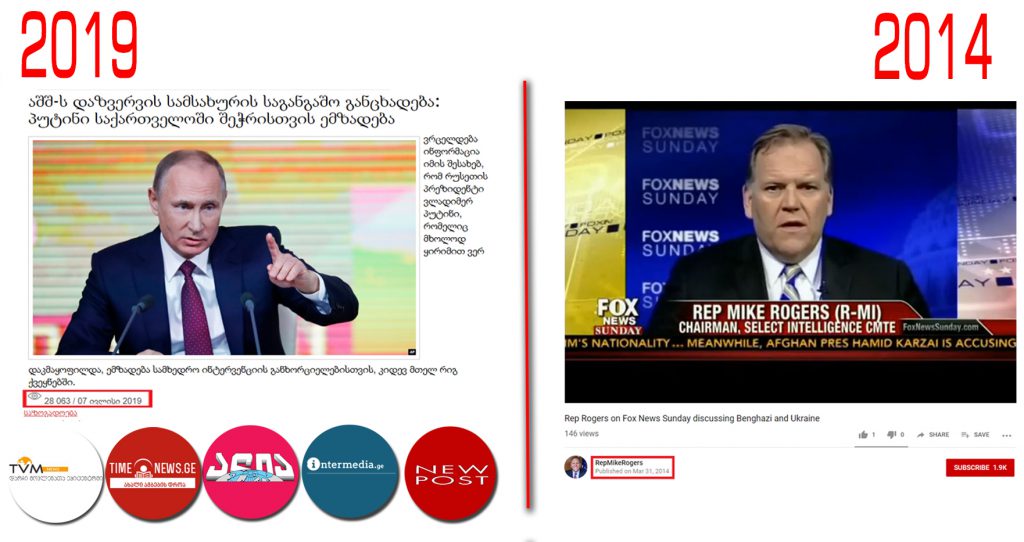 A news report claiming that Russian President Vladimir Putin is allegedly getting ready to invade Georgia went viral on Facebook recently. According to the same report, the U.S. Intelligence Service has confirmed it. On July 6, the news report was posted by Newpost.com.ge and TVM News.ge A day later, on July 7, the same report was spread by timenews.geOn July 7, Georgian tabloid ალიამ and online edition intermedia.ge reposted the report referring to timenews.ge.

According to the news report, President Putin plans to carry out military intervention in Georgia. The articles quote Mike Rogers, Chair of the House Intelligence Committee, as saying that to establish direct links with Iran, Putin is ready to carry out military operations in Georgia and Armenia. According to the same report, Putin is delivering Russia’s modern equipment to South Ossetia. 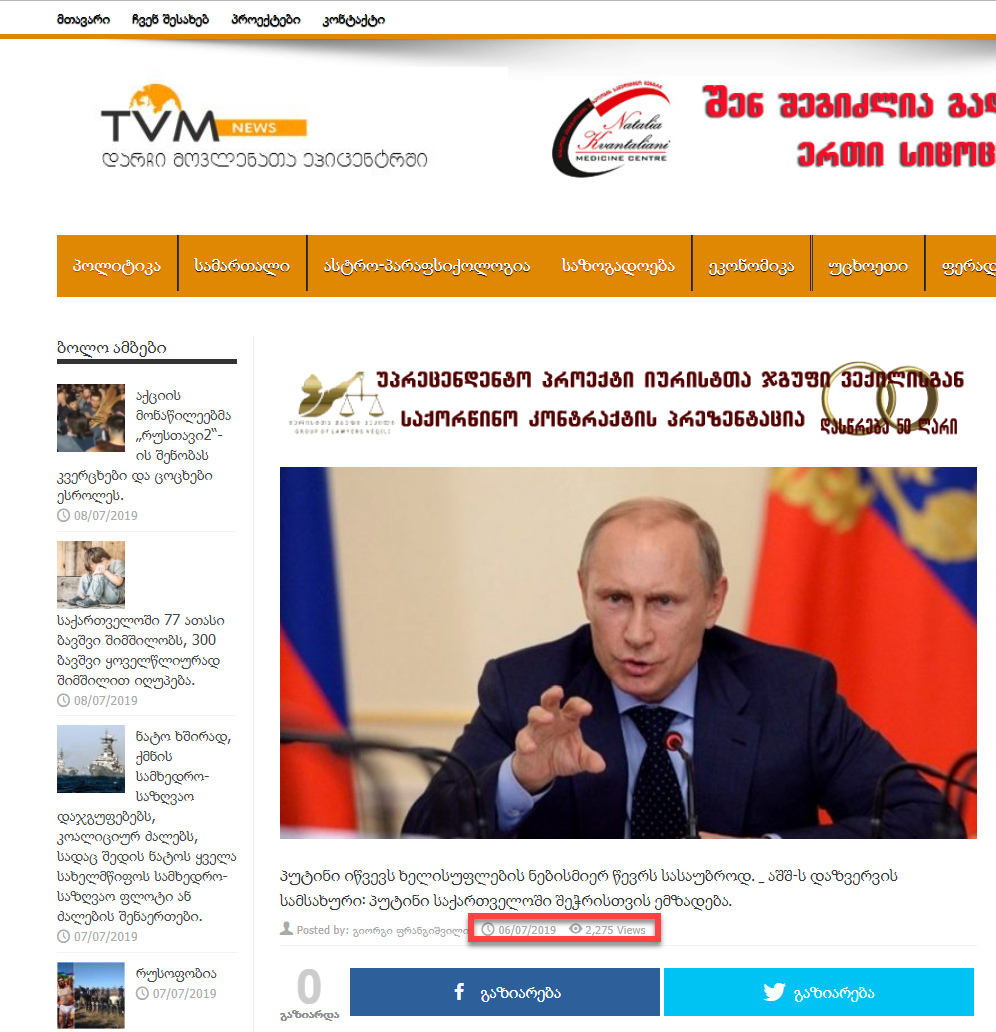 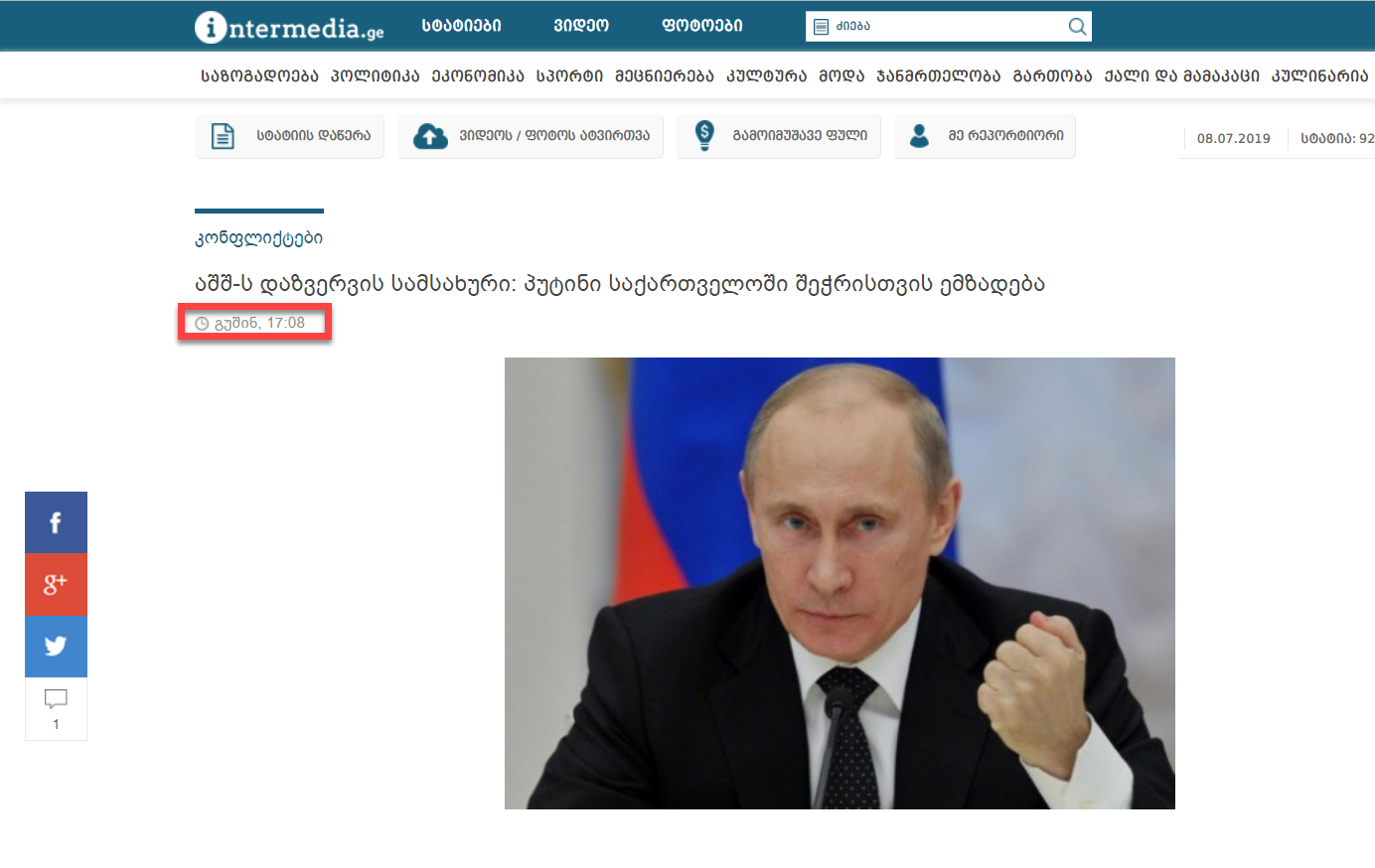 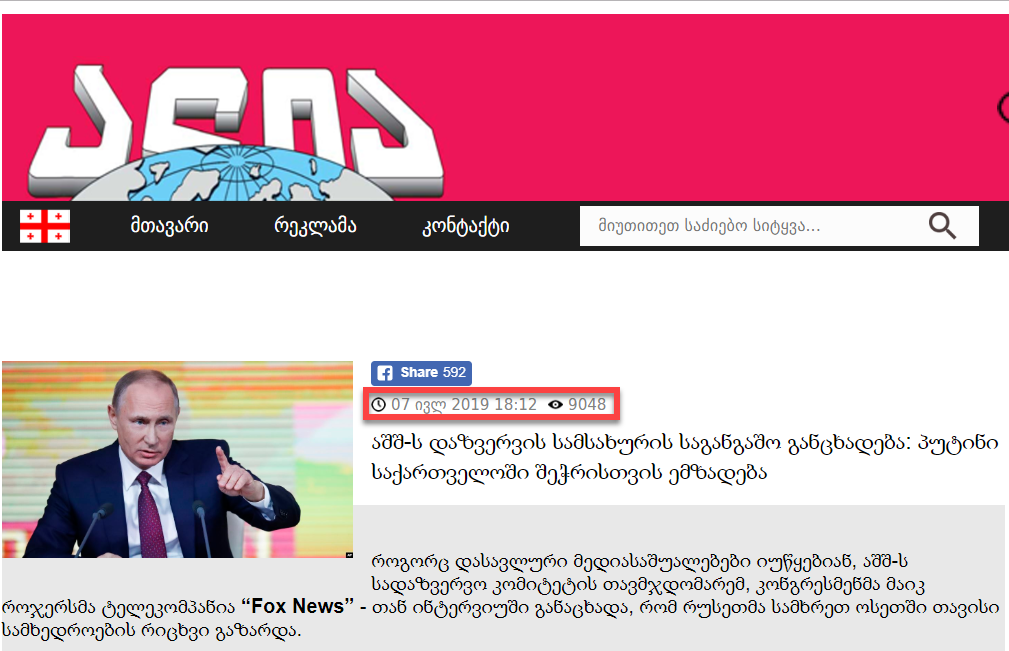 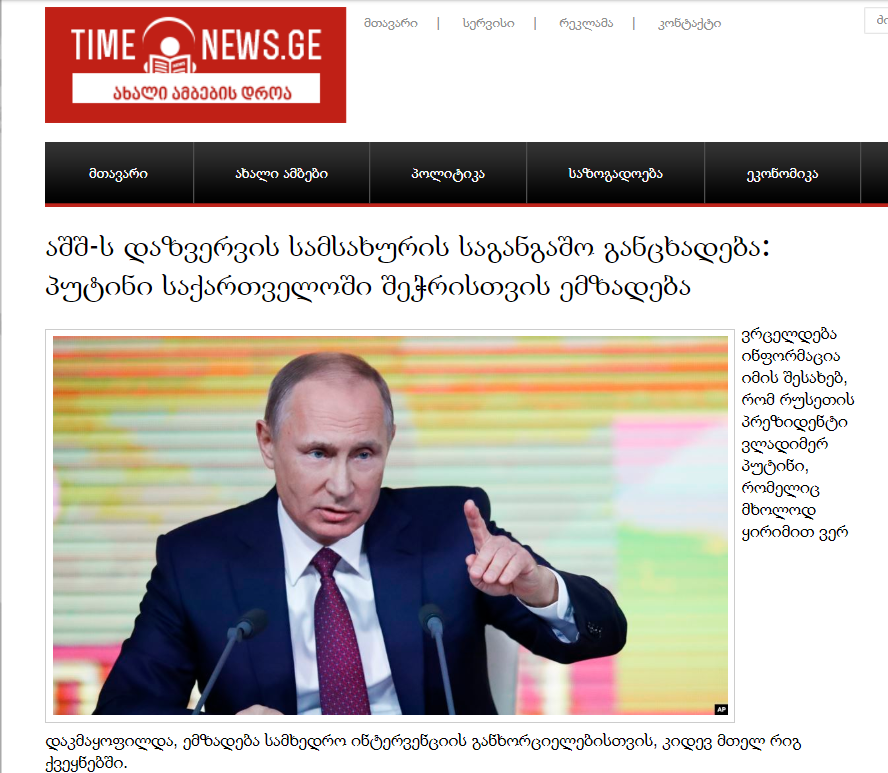 The information spread by online editions is manipulative and misleading. Mike Rogers, Chair of the House Intelligence Committee, spoke about Russian troops’ movement towards Georgia in the interview with Fox News on April 1, 2014 and not in July 2019. Spreading the statement made by Rogers five years ago in the context of ongoing protests and of Putin’s decision to cancel direct flights with Georgia aims at sowing fear of war among the population.

In 2014, Rogers made the statement about Russian troops’ movement in the context of Ukrainian and regional security and it aimed at analyzing Russia’s military decisions. 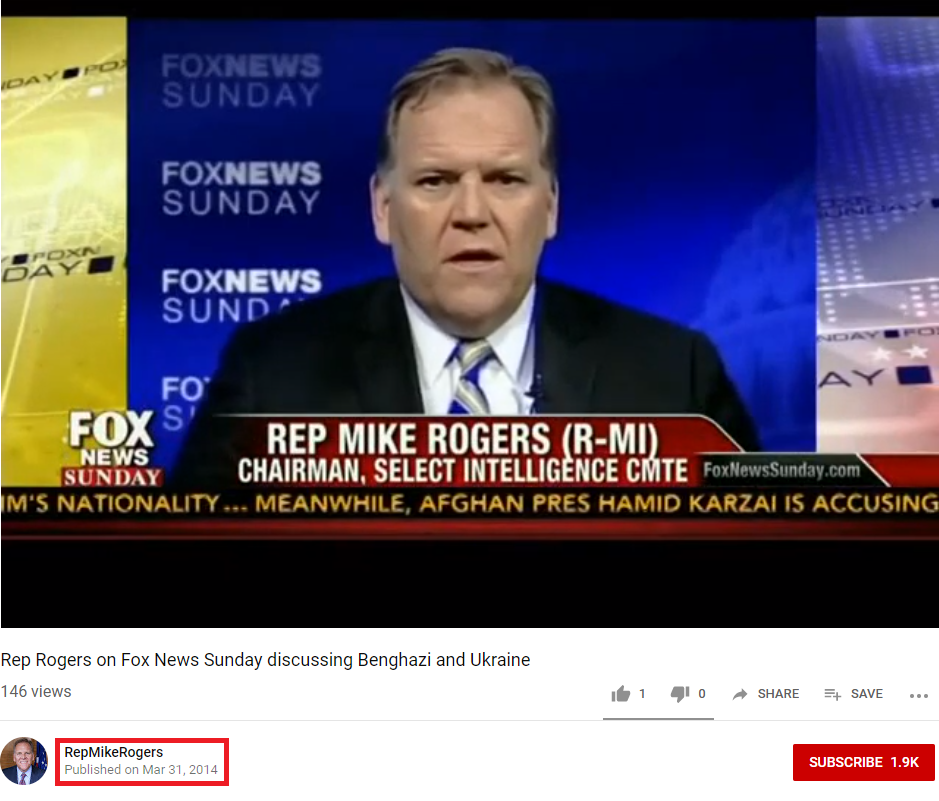 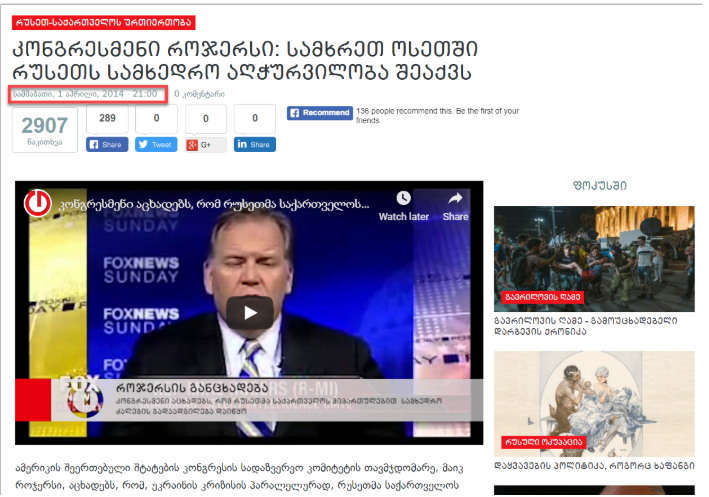 Shortly after the online editions spread the news report, it went viral on Facebook, subsequently shared by various pages and users. 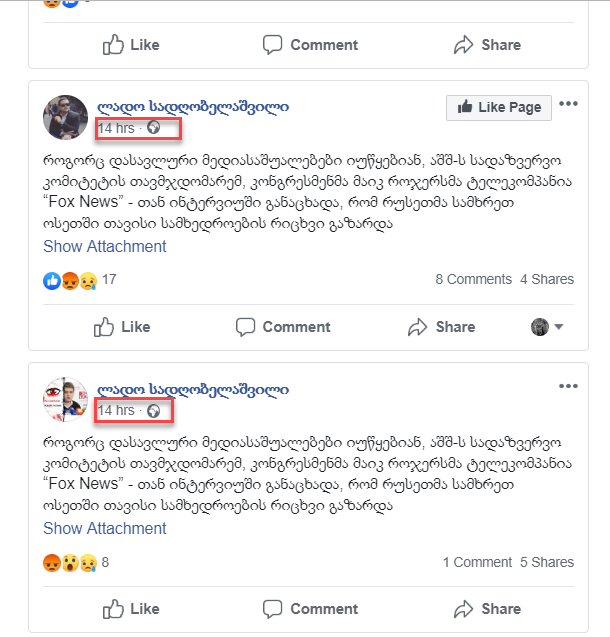 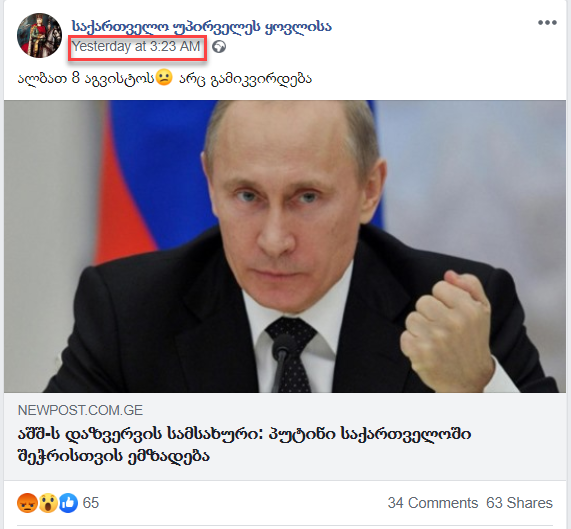 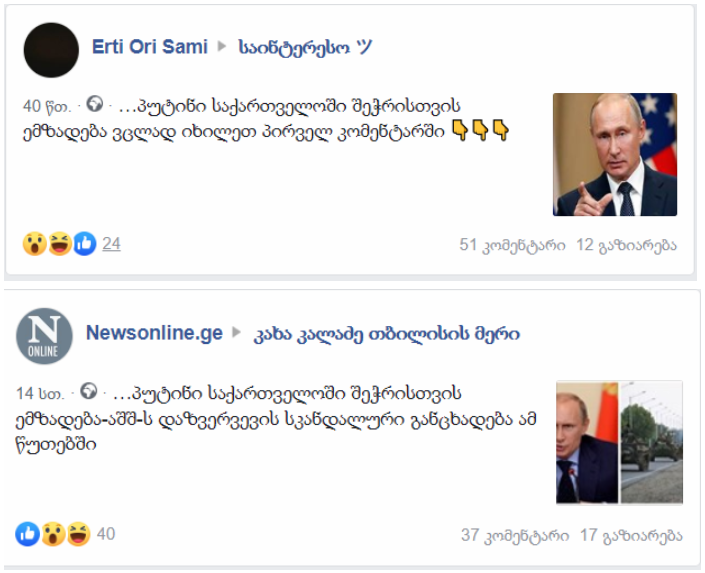 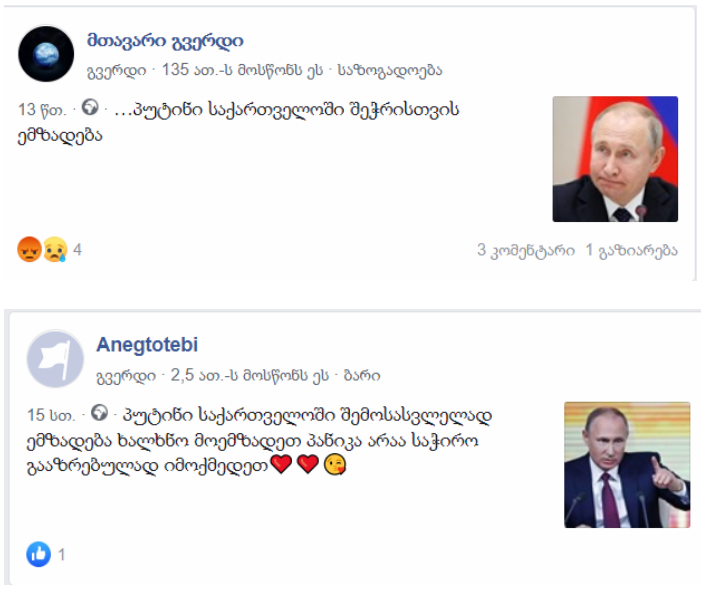 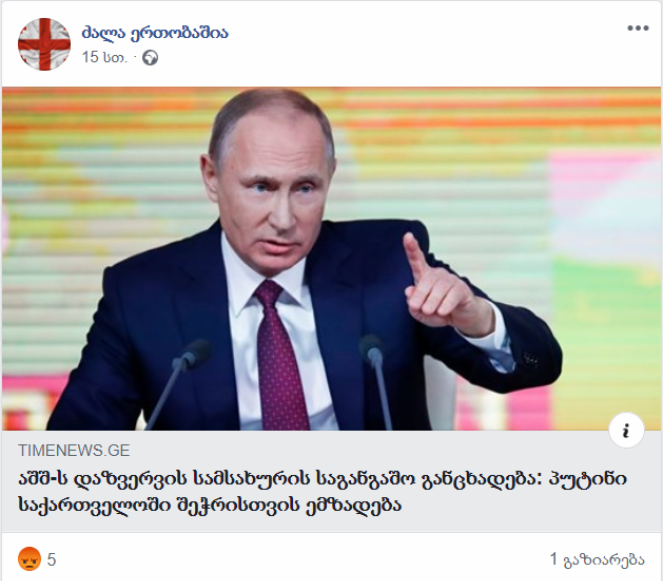 New Post and Timenews.ge are so called clickbait websites. The website traffic increases along with an increased number of clicks that enables the website to make more money. Such websites are mostly driven by financial interests and they use shocking clickbait headlines for this purpose. Advertising banners accompanying the information confirm that New Post and Timenews are clickbait websites. These ads mainly involve people’s myths about curing various diseases. None of these websites provide any information about their editorial boards. The section “contact” does not work that makes it impossible to get in touch with the editorial board.

Another website timesnews.ge differs from timenews.ge only by one letter and both of them frequently release identical information. A legal name of Timesnews.ge is WOME LLC. According to the Public Registry Agency, the organization was founded by Koba Vasadze on April 7, 2015. As of December 2016, Koba Vashadze owned 90% of shares in the organization and the remaining shares were owned by Irakli Tinashvili. According to the changes implemented on December 13, 2016, Koba Vasadze transferred 40% of his shares to Giorgi Melikidze’s ownership free of charge.

In its “About us”  section, TVM News notes that the website emerged on the Internet market in 2013. Tamta Dadeshelia serves as its admin and editor, and Giorgi Prangishvili is an editor of political and public blog. The website releases materials from anti-Western and pro-Russian edition “Georgia and World.”