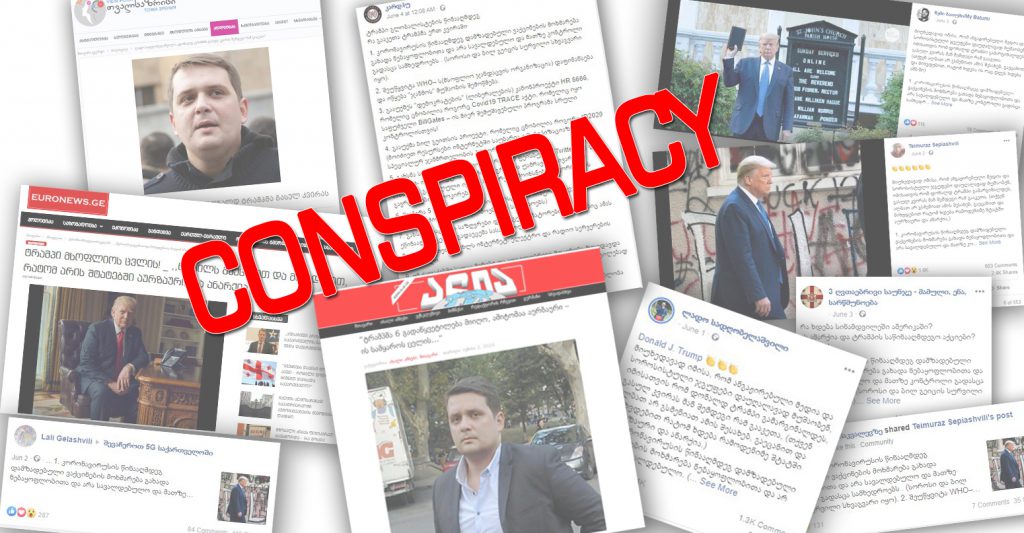 Information about Donald Trump allegedly making important decisions against globalists was widely circulated in Georgian social networks and online media last week. The list of decisions contains ten points and, as the sources of information claim, just that triggered anti-Trump rallies in the United States. It is worth noting that various actors shared identical texts with similar message boxes and some posts were even accompanied by English translations. The 10-point list mainly covers the issues related to coronavirus and 5G technology Lado Sadgobelashvili was the first to post six points of “deeds accomplished by Donald Trump during a week” on his Facebook page on June 1, tagging Trump’s official page. As of today, the post has about 3,300 shares. On June 2-4, Euronews.ge, ალია and tvalsazrisi.ge. also published articles referring to Lado Sadgobelashvili’s post.

Points 1, 3, 4, 6 and 7 of Trump’s 10-point decisions that spread virally are manipulative and most of them are linked to conspiracy theories. The same information containing six points was spread by foreign accounts in social networks back in May. Factcheck.org wrote about it earlier.

Point 1: “Made the use of coronavirus vaccines voluntary, not mandatory, and instructed the military to control it (George Soros and Bill Gates had quite a different desire).”

The claim as if Donald Trump made the use of vaccine voluntary and instructed the military to control it is manipulative. It is based on the remarks made by Trump while discussing Operation Warp Speed, the U.S. initiative to facilitate and accelerate COVID-19 vaccine development, according to which “we’re looking for a full vaccine for everyone that wants to get it.  Not everybody is going to want to get it.” The U.S. President said that once the coronavirus vaccine is ready (supposedly in late 2020), it should be distributed quickly and just therefore he would mobilize the military to ensure it, focusing first on nursing homes and the elderly most vulnerable to deadly complications from the virus. It should be noted that the military will be instructed to distribute the vaccine, rather than check its quality or control who will be a recipient. Furthermore, any claims as if George Soros and Bill Gates had an absolutely different desire and both were in favor of mandatory vaccination are a lie linked to a conspiracy theory about Bill Gates allegedly planning to use mass coronavirus vaccinations to implant microchips in people to track their movements.

Point 3: “Cancelled the Democrats (Liberals) HR 6666 bill, known as the COVID 19 TRACE Act that was the basis for Bill Gates’ tracking project.”

First of all, there is no evidence that HR 6666 — the COVID-19 Testing, Reaching, And Contacting Everyone (TRACE) Act — is a “basis” for a purported “tracking project” by Bill Gates. The bill outlines a $100 billion fund to be managed by the Centers for Disease Control and Prevention in order to fund contact tracing efforts across the country, rather than impose full control on the population.

Secondly, the President does not have the power to “cancel” a bill. Instead, he could veto a piece of legislation if it were to come to his desk. But the bill in question is far from that step: H.R. 6666 is currently before a House committee. It would need to advance to the House floor and be passed by that chamber, as well as by the Republican-led Senate, before it would go to Trump.

In fact, ID2020 is the name of a nonprofit organization with a mission to widen access to digital forms of identification – and to ensure people have control over their “digital IDs.” For example, ID2020 has partnered with a number of other organizations on a program to “offer a digital identity platform” to refugees at a camp in Thailand that would allow them “to not only access improved healthcare services but also securely store educational and professional credentials.”

The organization was founded by several partners, including Microsoft, of which Gates is co-founder. Just therefore, the supporters of conspiracy theories linked ID2020 to a conspiracy theory as if Bill Gates plans mass chipping. Actually, the notion that a Gates project was “cancelled” may be a reference to an at-home testing initiative for the novel coronavirus, backed by Gates that was taking place in the Seattle area. The Food and Drug Administration recently ordered the project to temporarily halt its effort until additional approvals were granted; but it hasn’t been permanently canceled. That project — the Seattle Coronavirus Assessment Network — wrote on its website on May 14 that “SCAN’s test is authorized by the Washington State Department of Health. However, the Food & Drug Administration (FDA) recently clarified that a separate federal emergency use authorization (EUA) is required to return results for self-collected tests; therefore, FDA has temporarily suspended SCAN testing. Noteworthy that the FDA has not raised any concerns or doubts regarding the safety and accuracy of SCAN’s test.

The Trump administration accused Huawei, a Chinese tech giant, of conspiring to steal trade secrets and said its technology could be used for Chinese espionage. It cut off supplies to Huawei and delayed the rollout of the company’s 5G technology. The sanctions imposed by the Trump administration on the company have slowed down the installation of 5G technology, but still its introduction is underway in the United States. All of the major U.S. carriers have launched 5G networks, covering more cities throughout the United States. AT&T has the best coverage, providing 5G networks to consumers in several hundred cities. AT&T is followed by Verizon and so on. Thus, any claims that Trump has halted the spread of 5G technology in the United States are manipulative and can be associated with conspiracy theories about the links between coronavirus and 5G technology. To counter the conspiracy theories, the World Health Organization noted that 5G mobile networks do not spread COVID-19 and that COVID-19 is spreading in many countries that do not have 5G mobile networks.

Point 7: “Opened the borders of U.S. states and defiant governors will be held accountable”

Although Trump used threatening words when talking to governors, the latter have the final say regarding when the borders and economy will be reopened in their respective states. Certainly, the instructions from the White House are important in this decision. But it is up to a separate state, not the federal government, to make decisions on public health and welfare, for example, when to close businesses and schools. Moreover, the powers at the federal government’s disposal are mainly held by the Congress, not the President. Accordingly, Trump has no legal power to reject or neglect the decrees and decisions approved by governors regarding public health and welfare. Meanwhile, Trump has also changed his rhetoric and announced at a news conference from the White House’s Rose Garden that “I’m not going to put any pressure on any governor to open,” predicting states will “know when it’s time to open.” He, however, added that “if they don’t do a good job, we’re going to come down on them very hard. We’ll have no other choice.”