Who Spreads Disinformation about U.S. Troops Opening Fire on Peaceful Civilians in Afghanistan? 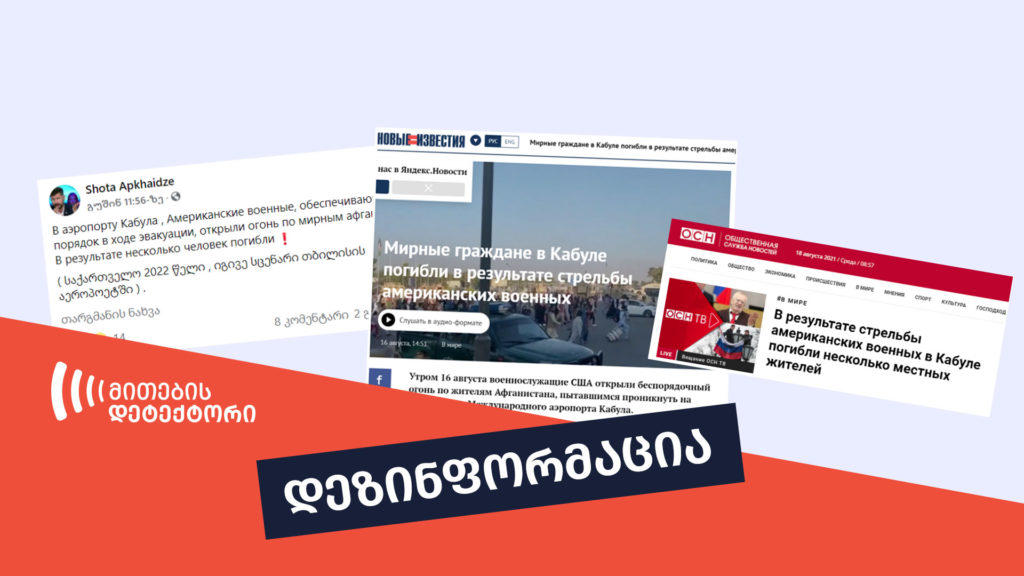 On August 16th, Shota Apkhaidze, the director of the Caucasus Center for Islamic Studies, published a post claiming that in the Kabul Airport, the U.S. troops managing the evacuation orders have opened fire on the Afghani population and caused the death of several peaceful civilians. Apkhaidze also mentioned that the same scenario would occur at Tbilisi International Airport in 2022. The author of the post did not indicate any source of the disseminated information. As of August 18th, the post is no longer available on Facebook.

On the same day, identical information was disseminated by the following Russian-language sources: newizv.ru and osnmedia.ru. According to Новые Известия, American troops have indiscriminately started shooting at the peaceful civilians trying to leave the territory of Afghanistan through the airspace. The article claimed that the shooting has resulted in the death of at least 12 and the injured 14 Afghanis. Общественная служба новостей similarly claimed that several peaceful civilians had lost their lives due to the shooting initiated by the U.S. troops. 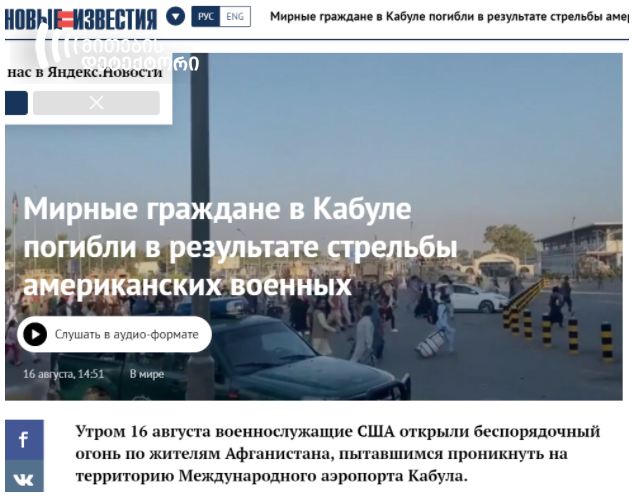 The information disseminated by Apkhaidze and the Russian media outlets regarding the death of peaceful Afghani civilians due to the US-initiated shooting is false. In reality, American troops have opened fire on two persons only after they started shooting in the direction of the U.S. forces.

According to the statement issued by the representative of the U.S. Department of Defense, two armed men have opened fire in the direction of the U.S. forces at the Kabul airport. The Wall Street Journal clarified that the two armed men were members of the Taliban.

On August 16th, five people lost their lives to the turmoil created at the Kabul Airport. According to the witnesses, they saw five bodies in total; however, it is yet not certain whether they were shot to death or got killed in the stampede. The information has been disseminated by Reuters and is based on the stories of the witnesses. According to the BBC, three people have fallen out of the airplane as they sought to hold on to the airplane ready to depart.

The British media stated that shots could be heard in the Kabul airport on August 16th since the U.S. troops fired in the air to deter people trying to force their way onto a military flight.

The Taliban has sieged the capital of Afghanistan on August 15th and shared a statement regarding the creation of the “Islamic Emirate of Afghanistan.” The president has left the country, and the U.S. started evacuating its embassy staff since the Taliban started approaching the capital. Since that, the U.S. armed forces are actively engaged in evacuating people in the Kabul airport.

Shota Apkhaidze joined the Eurasian Institute, headed by Gulbaat Rtskhiladze, after he was released from custody as a political prisoner following the change of the government in 2012. He was convicted for bursting into the studio of Kavkasia TV in 2010, together with the representatives of Orthodox Parents’ Union and People’s Orthodox Movement, and committing a hate crime.

In 2013, Apkhaidze took part in the event organized by Caucasian Cooperation, involving a tour to North Ossetia, Kabardino-Balkaria and Dagestan. It was at this meeting that Shota Apkhaidze stated that “Saakashvili committed genocide of the Ossetian people in 2008.”

In 2015, Apkhaidze founded the Caucasus Center for Islamic Studies.

Apkhaidze frequently appears in various media outlets, among them Sputnik, Tsargrad TV, Новостной Фронт, etc. Shota Apkhaidze was positioned in Russian propagandistic media as one of the organizers of xenophobic and anti-migration march held in July 2017 upon the initiative of the then ultranationalist movement (now party), Georgian March.

Shota Apkhaidze has stood out with openly pro-Russian and anti-Western messages in various interviews. You can find some of the related articles here.

In November 2019, Shota Apkhaidze appeared on air at T.V. Zvezda, a Russian Defense Ministry-owned TV channel, as a journalist. The TV program “On air” (“Открытый эфир”) was devoted to a T.V. report prepared by Apkhaidze that reiterated Kremlin’s propagandist conspiracies on organ sale in Eastern Ukraine during the hostilities.

In the Georgian version of the pro-Kremlin outlet “NewsFront,” Shota Apkhaidze was indicated as the editor; nonetheless, he has later denied the fact with “Myth Detector.”