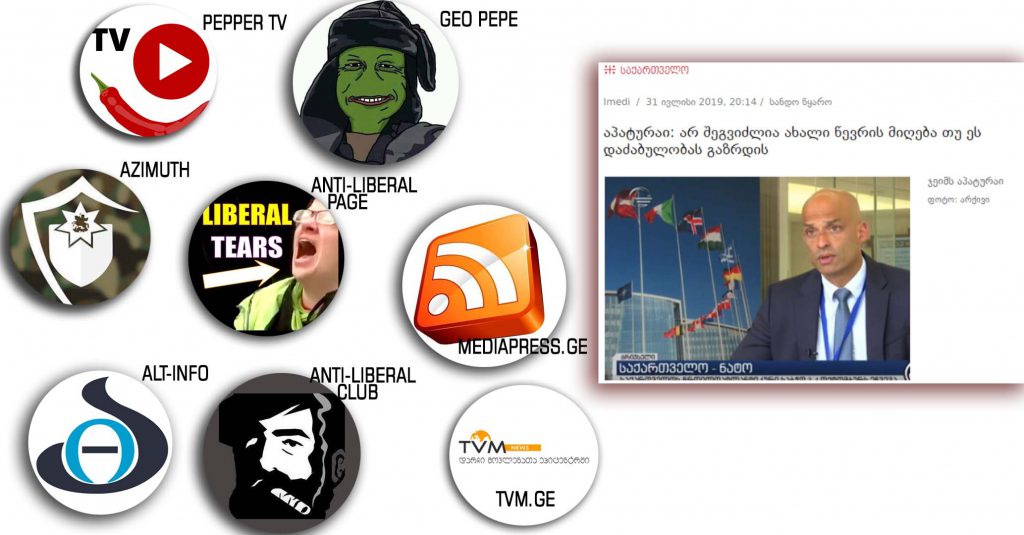 On July 31, a website Imedinews.ge released an interview with NATO Secretary General’s Special Representative for the Caucasus and Central Asia, James Appathurai headlined “Appathurai: we cannot accept a new member, if it increases tension.” On August 1, the editorial board had to change the headline after it was strongly criticized in social networks; however, a number of websites, among them mediapress.ge and tvm.ge reposted the interview with its old headline. The news article released by tvm.ge was later shared by “წიწაკა TV – Pepper TV” James Appathurai’s interview and in some cases, his photo with the same headline was spread by Facebook pages of hate groups, including Alt-Info,“Azimuth”,  moreover, Alt-Info’s article was shared by “Anti-Liberal Club”, “ Anti-Liberal Page” and “Geo Pepe” 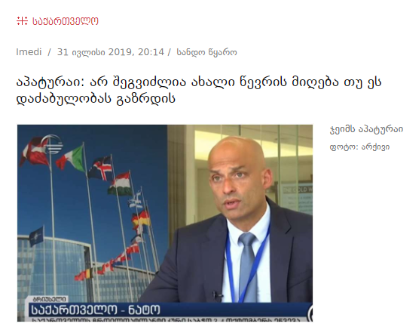 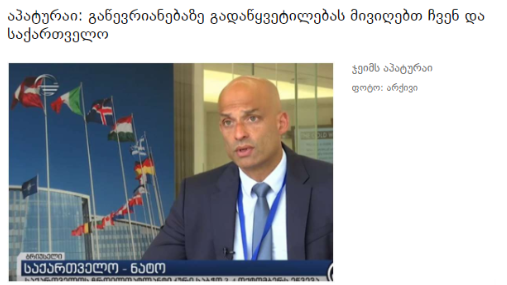 James Appathurai’s interview with the headline “We cannot accept a new member, if it increases tension” is manipulative and misleading. The words used in the headline and spread by websites and Facebook pages were torn out of context. In fact, Appathurai noted that NATO and an aspirant country will make membership decisions independently, without the interference of any third party. 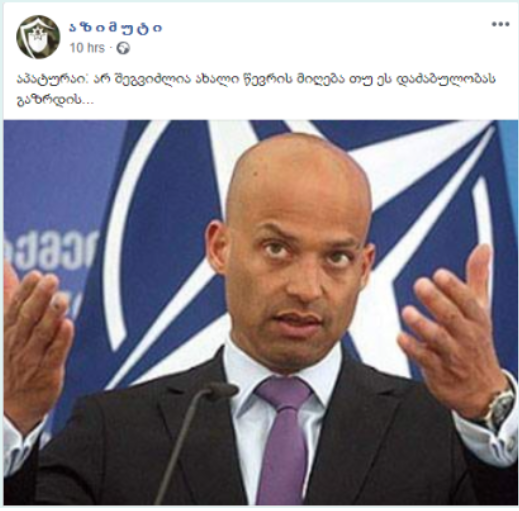 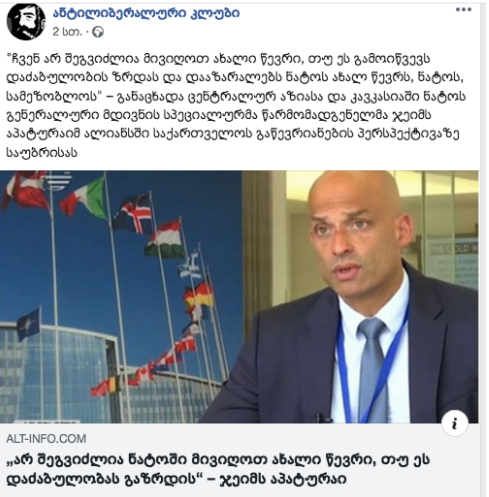 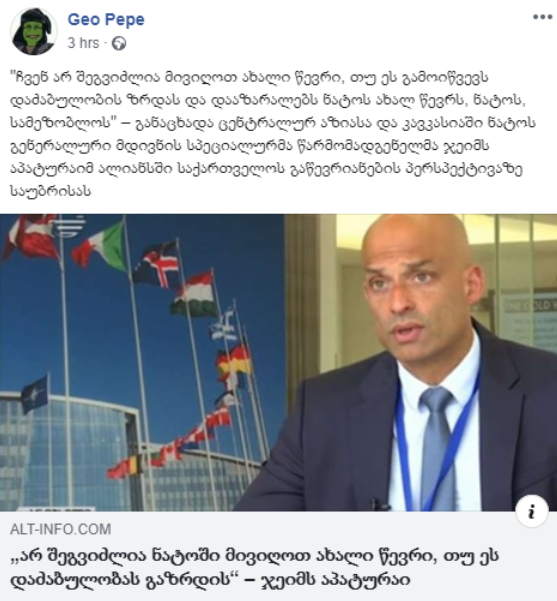 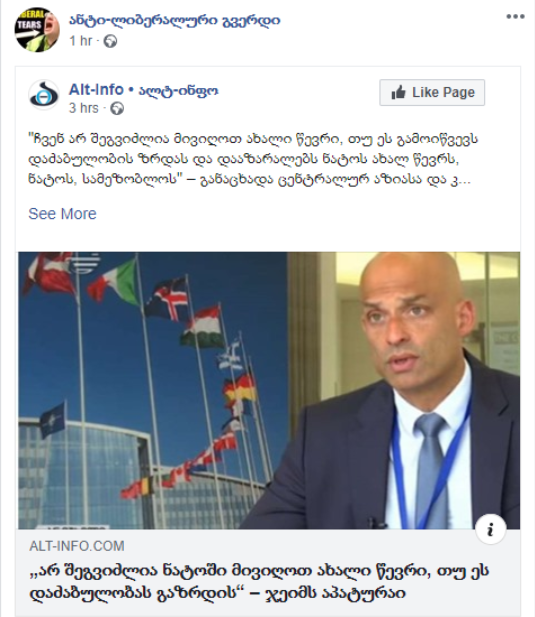 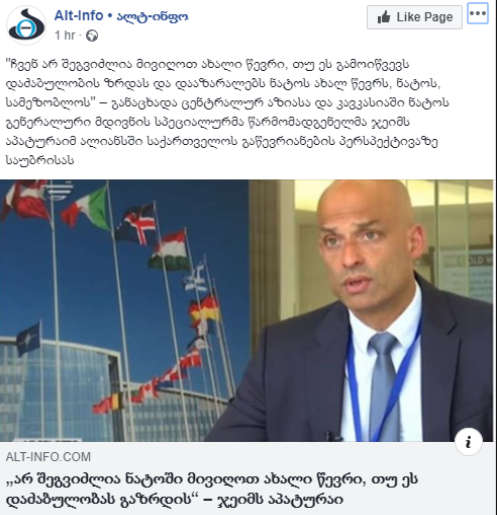 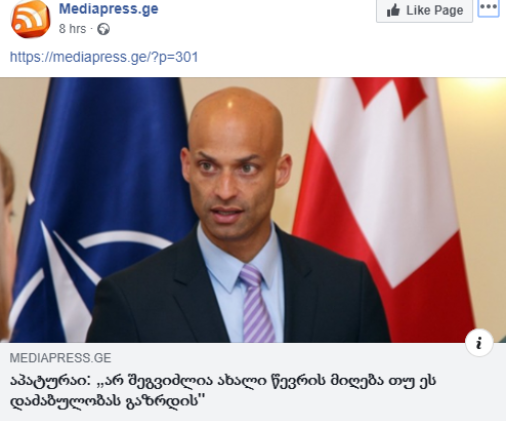 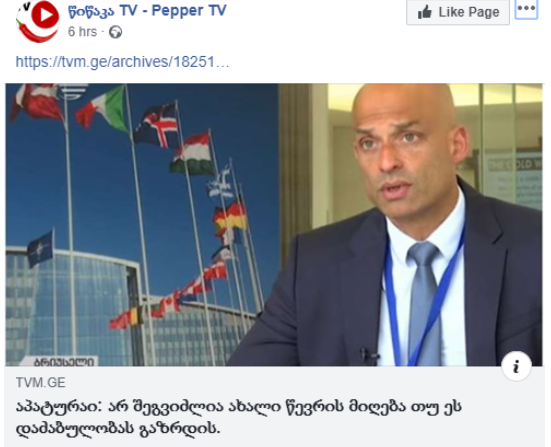 In the interview with Imedi TV’s news program Kronika, NATO Secretary General’s Special Representative for the Caucasus and Central Asia, James Appathurai spoke about Georgia’s NATO membership perspectives, noting that Georgia will definitely become a NATO member and despite some difficulties related to Russia, the alliance keeps a firm position and will make a decision through consensus.

Appathurai also said that earlier Russia resisted NATO membership of Montenegro and Baltic States, but the situation developed against its will.

The NATO Secretary General’s Special Representative also said that NATO cannot accept a new member, if it triggers tension, but these words were torn out of context. In fact, Appathurai noted that it is important that both NATO and an aspirant country are ready for membership, and that the third party has no right to interfere.

Appathurai said that NATO cannot accept a new member, if it increases tension and causes harm to a new NATO member, NATO and its neighborhood. He also noted that “we should look through these factors and it is normal,” adding that NATO had been making and will be making all decisions independently. An aspirant country will also be making decisions itself, he said, stressing that NATO will not allow the third party to interfere or make a decision.

Azimuth. The Facebook page Azimuth was created on December 19, 2017. In its “About the organization” section, the page notes that it is involved in military-analytical activities and informs the population on security issues. According to Facebook, the page is administered from Georgia, France and Russia. 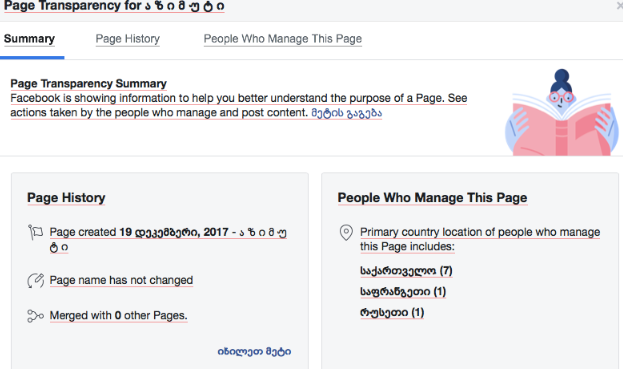 The page admin from Russia, who introduced himself as Beka in one of the video addresses, claims that he lives in Volgograd. He is talking about the need of negotiations with Russia, slamming the use of a term “occupier” against Russia as inexpedient. Simultaneously, he promotes nihilism as if Europe and the United States are incapable to assist Georgia. 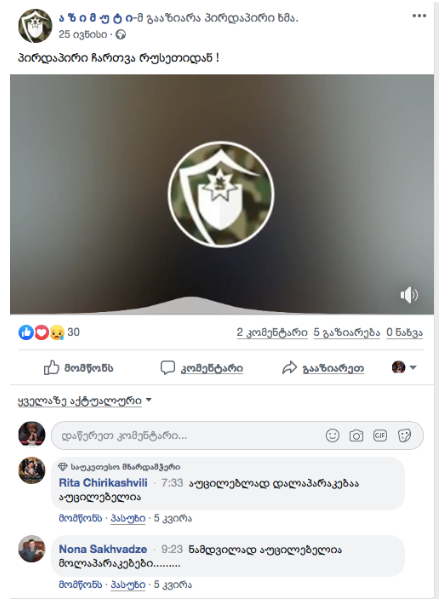 The page criticizes Michael Carpenter, Senior Director of the Penn Biden Center for Diplomacy and Global Engagement, as well as British Ambassador to Georgia, Justin McKenzie for the developments related to the June 20 anti-occupation rallies in Tbilisi. 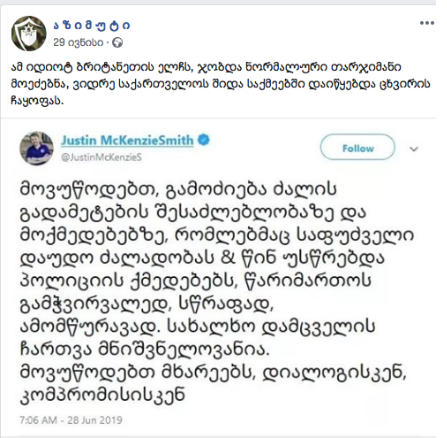 Azimuth frequently shares posts about Russian armament and current developments in the country, as well as the stories released by Russian propagandistic media outlets. 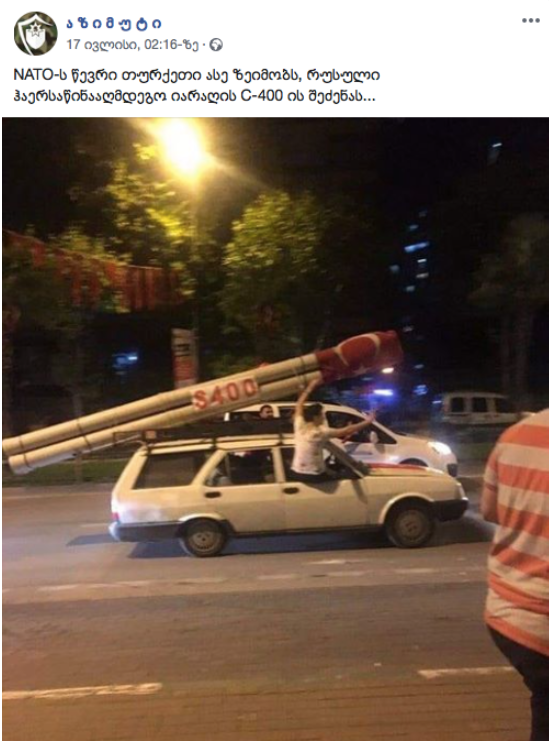 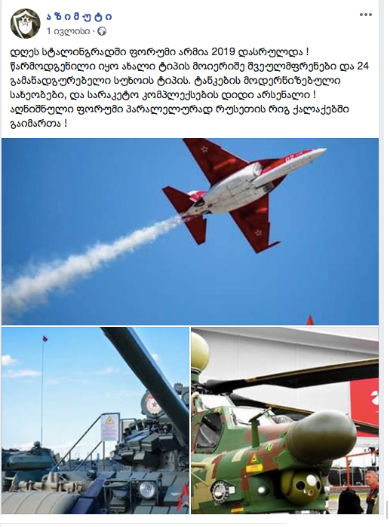 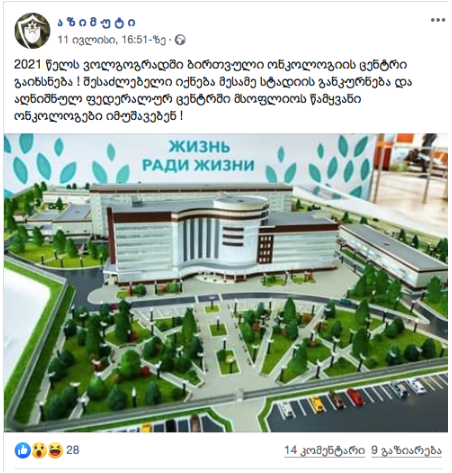 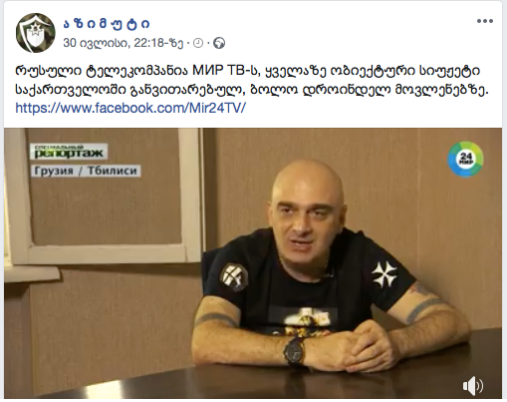 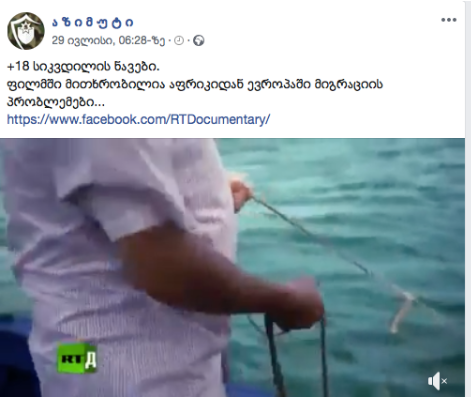 The page is trying to discredit the anti-occupation rally in Tbilisi; it is known for its hatred towards LGBT people and other groups. 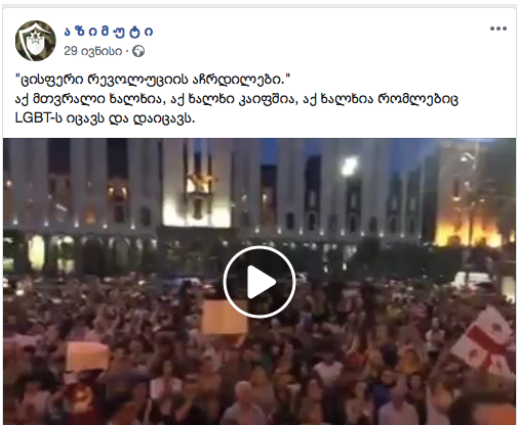 The page frequently shares the posts of Davit Nemsadze and Ermile Nemsadze, members of the group on civilian control of the military. The two are also cooperating with a radical group, Georgian March. Ermile Nemsadze’s address to the Russian President has been posted on YouTube, in which he slams Rustavi 2 TV host, Giorgi Gabunia for insulting President Vladimir Putin using swear words and calls on the latter to bring special troops to Georgia to destruct Gabunia and former director of the TV channel, Nika Gvaramia, like it happened in London against “betrayers of Russia”, among others Litvinenko, Berezovsky and Bendukidze.

In its “About us” section, TVM News notes that the website emerged on the Internet market in 2013. However, according to registrator.ge, the website was registered in 2015. Tamta Dadesheli serves as its admin and editor, and Giorgi Prangishvili is an editor of political and public blog. The website releases materials from anti-Western and pro-Russian edition “Georgia and World.”

Mediapress.ge has no “About us” section. According to registrator.ge, the website was registered in 2016. There is a public group on Facebook administered by Giorgi Lagidze and Anastasia Dvalishvili. Giorgi Lagidze notes that he is the founder of Marshalpress. Moreover, Tamta Dadesheli, admin and editor of TVM News, shares some news in the group.

Alt-Info, “Anti-liberal Club”, “Anti-liberal Page” and “Geo Pepe” are Facebook pages created by hate groups, which were blocked by Facebook on May 17, 2019 after the pages spread homophobic posts regarding the May 17 rally, marking the International Day Against Homophobia, Transphobia and Biphobia.