Who links Chipization with a РЕН ТВ Movie about the Events of November 7th? 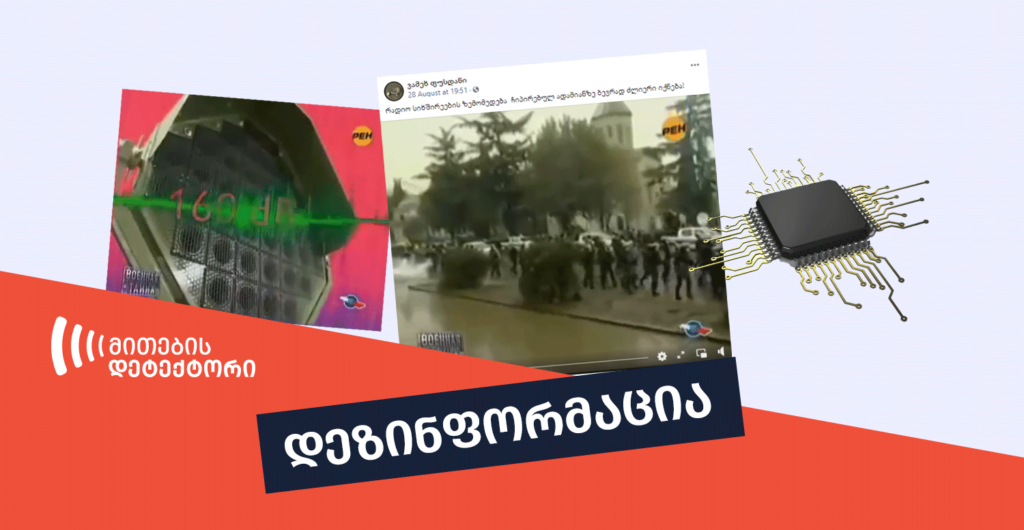 On August 28, the Facebook user Vamekh Fusdani shared a documentary made by Russian channel REN TV about the dispersal of the demonstration on November 7th, 2007. Through the accompanying description, the author links the video to chipization, claiming  that “the impact of radio frequencies on the chipped people will be significantly stronger!” The video itself claims that the authorities used not only tear gas, water cannons and rubber bullets to disperse the protesters but also the American acoustic weapon LRAD, previously tested in Afghanistan and Iraq. The film also claims that the device transmits powerful sound impulses, causing pain in the ears, unexplained fear and panic, and can even pierce the armour of a tank. The documentary compares Russian and American acoustic instruments, stating that in contrast to the Russian ones, the American tools affect not only the tympanic membrane of the ear but also the human psyche.

In November 2007, information about the demonstration appeared in the Russian media with the following headline: “The United States tested a new psychotronic weapon on protesters in Tbilisi.” 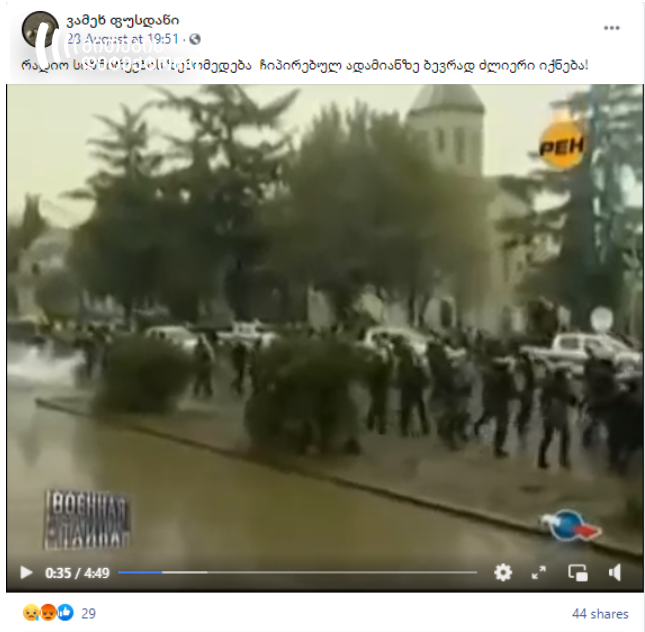 Linking the LRAD technology to chipization based on a Russian video is a conspiracy, while the film itself is manipulative and contains unsubstantiated claims. The use of LRAD acoustic devices to disperse stocks is a proven practice, although some international organisations do not recommend its use. It should also be noted that the Russian National Guard also purchased sound and laser weapons in 2018.

Acoustic devices are used by the police to maintain peace and order and to manage a wave of protests at rallies without severe damage or casualties.

In 2009, in the city of Pittsburgh, Pennsylvania police used an LRAD device to repel the protesters marching against the G20 summit.

The video of the event shows the demonstrators covering their ears and start retreating as the truck-mounted LRAD, resembling a satellite dish, emits a loud noise similar to a car signal.

According to a 2007 report by the Human Rights Watch, during the special operation on Rustaveli Avenue, the authorities have used long-range acoustic devices (LRAD). Two pickup trucks equipped with these devices were moving on the main street. Nonetheless, the report, which primarily dealt with the overuse of force at the rally, did not concern the legitimacy of the direct use of the LRAD.

LRAD systems are used by law enforcement, government and defence agencies, as well as maritime and commercial security companies, to remotely deliver voice messages and warnings. LRAD systems are used to scare birds and animals away from airport runways, nuclear power plants, gas and oil rigs, mining and agriculture, and industrial plants.

The LRAD device has extremely high decibel power and can be used as a less-lethal weapon to control the masses. There is no medical research assessing the effects of acoustic weapons on humans. Cases of hearing loss and prolonged ear pain have been reported in 1990-2015, although authoritative scientific research on the impact caused by the device is not yet available.

LRAD technology has been sold in 60 countries around the world, including Azerbaijan, Poland and Georgia. The LRAD starts at USD 5,000, and the most expensive model costs between USD 100,000 and USD 190,000.

Similar weapons can be found in the equipment of the Russian police. In 2018, the Russian National Guard, often used to quell anti-government protests, bought two cars equipped with laser and acoustic weapons for 65.2 million rubles (USD 995,250).

The world is not new with the use of LRAD technology. For example, in 2005, pirates tried to hijack a cruise ocean liner near the coast of Somalia, but the ship’s crew used this acoustic weapon against them. The impact of the directional sound waves forced the pirates to abandon the liner and flee.

The legitimacy of using such weapons to disperse the demonstrations remains controversial. In the United States, for example, where the use of sound weapons has been relatively common, after the use of LRAD to disperse a rally in New York in 2014, New York City Police Department was sued by people seeking compensation for victims and prohibition of LRAD use until the adequate training of staff. Restriction of use was. In 2021, the New York representation agreed to pay USD 748,000 to the victims and change the practice of using the LRAD; in particular, NYC developed written instructions and banned the so-called “disruptive tone”. According to the recommendation of the American Civil Liberties Union (ACLU), the use of LRAD should be discontinued until relevant studies on the long-term health effects of gun action become available. A report by Doctors for Human Rights also states that the medical literature on the effects of acoustic weapons is rather scarce. There are still serious questions about how safe and effective such weapons are in controlling the masses.

The Russian video claims that American weapons cause resonance of internal organs through infrasound, leading to heart disease, unbearable headaches and hallucinations. The sound frequency of LRAD technology is 2500 Hz, which is a sound that is perceptible to the ear and is neither infrared nor ultrasound. The human hearing organ senses mechanical oscillations with frequencies ranging from 17 to 20,000 Hz. Such oscillations are called sound or acoustic oscillations. Infrared has a frequency of less than 15-20 Hz, while ultrasound has a frequency of more than 20,000 Hz.

The sound power of LRAD technologies varies from 137 to 162 decibels, depending on the model data. For comparison, the signal of ambulances ranges from 110 to 129 decibels, while the volume of a fire truck can reach 160 decibels.

Accordingly, the allegation that an acoustic weapon can pierce an armour made of 500-600 mm steel or other solid material in an LRAD tank is false.

Connecting the LRAD technology with chipization and 5G technology is a conspiracy.

Information about the integration of chips through vaccination is a conspiracy theory, which is actively spread in the Georgian media and Facebook pages. Amidst a global pandemic, conspiracy theories mostly rely on the coronavirus vaccine and 5G technology.

Several fact-checking organisations have investigated the conspiracy regarding the integration of chips into the human body during vaccination. According to Reuters, the false information about the microchips and Bill Gates was based on the TED Talk hosted by the founder of Microsoft and his opinion expressed on Reddit, where he answered questions about Covid-19. Gates’ statements have since been manipulated on various platforms.  In response to the question “What should businesses do to help the economy during the need for social distance?” Gates referred to digital certificates, although the “digital certificate” he cited was not related to the conspiracy to implant microchips, and Gates was referring to having an open platform for expanded access to information.

After the emergence of the coronavirus pandemic, certain groups began to associate 5G technology with the virus. These groups suggested that the 5G network, in parallel with the spread of the virus, causes damage to the human immune system, causing an increase in the death rate.

Healthcare workers and scientists in the field have tried to dispel this myth from the beginning, stressing that the 5G network does not affect the spread of the coronavirus. The 5G network spreads waves that are not dangerous to humans.

For more information on chipization and 5G Technologies, see the articles of “Myth Detector:”

The Facebook profile “Vamekh Fusdani” has spread a manipulative video in the past. The video gave the impression that the Italian army had dropped the EU flag from its headquarters. Vamekh Fusdani also shares videos of Ria Novosti, Russia Today, in which the European flag is burned, unfurled and destroyed at different times in different European countries. This trend became apparent after violent groups opposed to the “March for Dignity” in front of the parliament on July 5 and 6 and first unfurled the EU flag on July 5th and burned it on July 6th.