Who is “worth” of media critics? 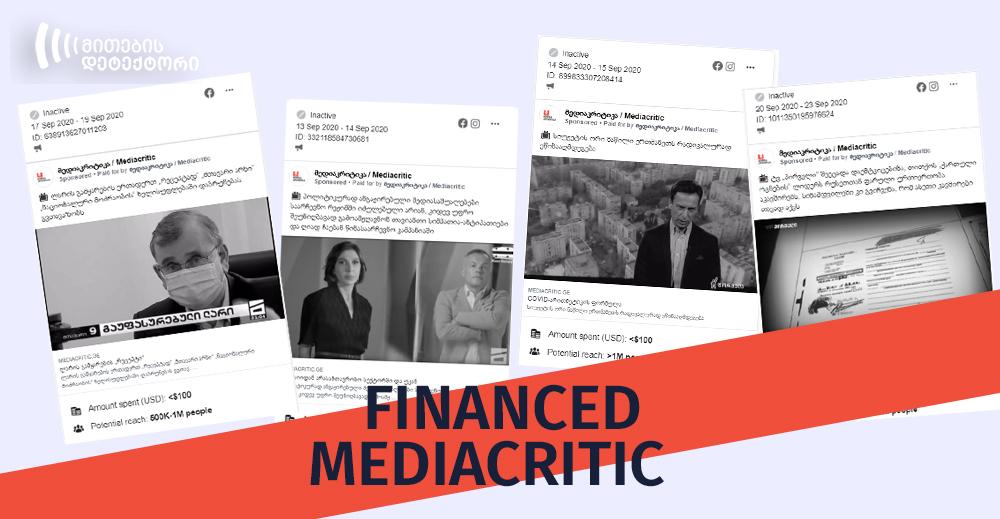 “Myth Detector” analyzed 90 articles published on the mediacritic.ge between August 1, 2020 and October 31, 2020. 81 out of 90 articles criticize specific media outlets or opposition media. 76 out of 81 articles were dedicated to the following 3 media outlets disloyal to the government:

One of the two articles criticizing “Rustavi 2”, primarily relates to the period prior to 2019, when it was led by the current management of “Mtavari Arkhi”, before the staff and the general director of the news channel were replaced.

Throughout the monitoring period, “Imedi” is mentioned 5 times by the MediaCritic and only one of the publications is solely dedicated to the criticism of the Imedi production. In the remaining articles, “Imedi” is mentioned among other TV channels. Two articles published about “Imedi” (1,2) contrast “Imedi” to “Mtavari Arkhi”/other critical media outlets. 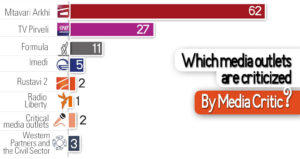 Besides, 3 articles refer to “critical media” without mentioning the specific names of the media outlets. Two articles about media representatives “disregarding recommendations” and “chasing the comments” do not mention specific media outlets, however, use the shots by “TV Pirveli”. 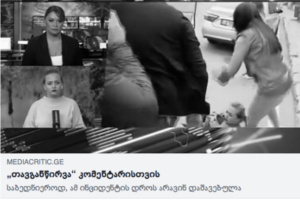 The only online media outlet that became the subject of MediaCritic’s criticism was “Radio Liberty“.

It is worth noting that during the monitoring period, no articles have been published on TV channel “Obieqtivi” affiliated with pro-Kremlin party “Alliance of Patriots” and whose editorial policy is identical to the party’s position.

The movie, simultaneously shared by the Alliance of Patriots and affiliated Facebook pages on tinp.ge – Today in Politics (Dghes Politikashi), develops the Kremlin’s notorious conspiracy on Georgian snipers participating in Ukraine’s Maidan events, which was also covered by EU vs Disinfo multiple times.

After the “Myth Detector” fact-checked the video, Facebook marked the material by TV “Obieqtivi” as fake news. 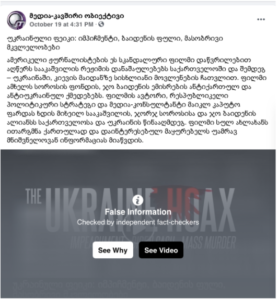 MediaCritic did not target other anti-Western and xenophobic media outlets either – for instance, newspaper “Asaval-Dasavali”. One of the newspaper’s authors was participating in 2020 elections under the ultranationalist political movement “Georgian March” and as evidenced by the below extract, considers certain rights and relevant legal framework to be forced onto Georgia by the West and sees it as the “legitimization” of homosexuality.

Asaval-Dasavali, 3-9 August
Giorgi Gigauri, majoritarian candidate of Georgian March in Saburtalo district: “The Parliament was forced to approve this code on children per the directives and supervision of them [the West], which is a logical continuation of that evil anti-discrimination law, legalizing “sexual minorities” in Georgian legislation.

Criticism because of the anti-Western discourse criticism

Mediacritic also publishes the opinions of pro-government experts that compare the research done by the Media Development Fund (MDF) on media outlets with anti-Western editorial policy to McCarthyism:

Zaal Anjaparidze: “On the one hand, in the context of Russian threats and rising tensions between the West and Russia, MDF’s criticism of anti-Western narratives in the media fits well with the tendency to fight against Russian disinformation and “soft power”. However, immediate threat may sometimes be used for discrediting and delegitimizing specific political opponents or the entire social groups to oust them from social life. Considering this factor, MDF’s efforts more and more resemble the events of the 1950s in the US that are nowadays known as McCarthyism, which in the process of tackling the danger posed by the Soviet Union, became themselves a threat to a democratic society.