Who is Waiting for Immortal Regiment in Georgia on May 9? 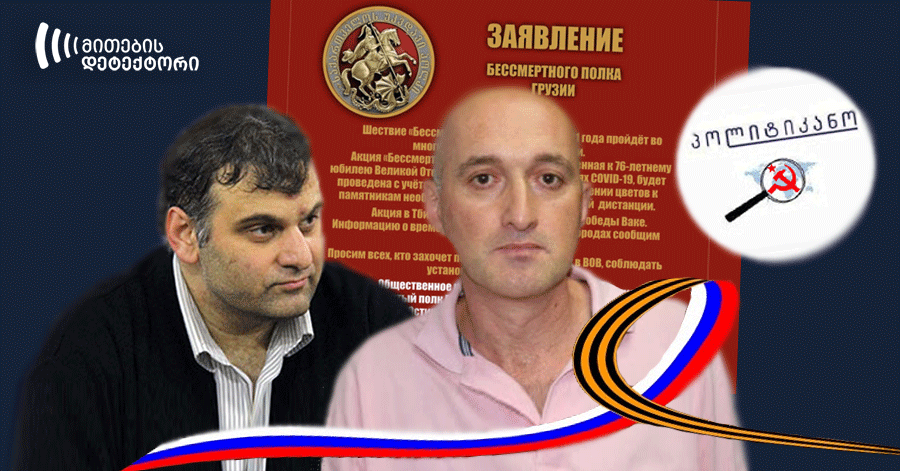 On May 9, Russia and part of post-Soviet countries mark the victory over Nazi Germany in World War II – the conflict dubbed by Russia as the Great Patriotic War. The march of the Immortal Regiment is one of integral parts of the May 9 celebrations. During previous years, the Immortal Regiment also held its march in Georgia, triggering strong outcry from civic activists. The COVID-19 pandemic has mostly changed the plans for the May 9 celebrations over the past two years. But despite the current epidemiological situation in Georgia, various pro-Kremlin groups still plan to hold a march and a rally on May 9. 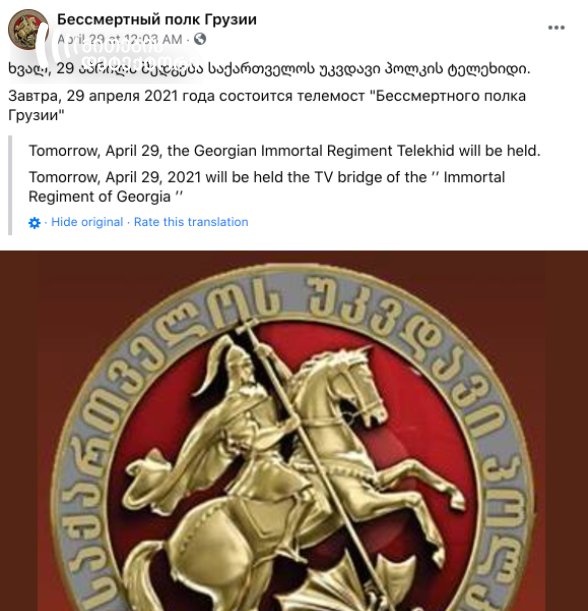 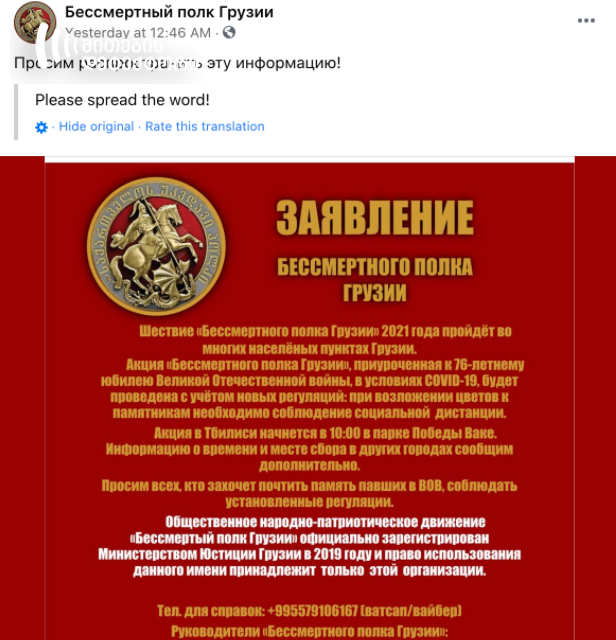 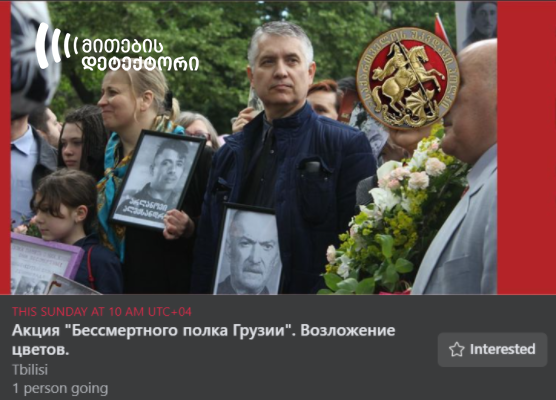 Both Russian and Georgian pages of the event indicate that the gathering will be held at the central entrance of Vake Park. 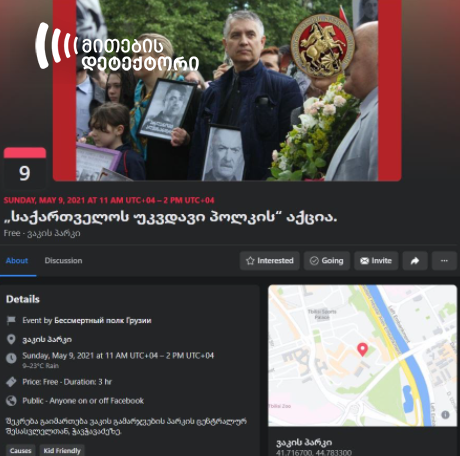 It is noteworthy that Vake Park has been temporarily closed for renovation. Gulbaat Rtskhiladze, head of the Eurasian Institute, said in the interview with Georgia and World that the Immortal Army of Georgia movement plans to hold a large-scale event in one of the Georgian cities, without elaborating on the details. He called on the population to bring flowers to Konstantine Leselidze’s monument instead of Vake Park. Rtskhiladze criticized President Salome Zurabishvili’s initiative to build a memorial in Vake Park commemorating Georgian soldiers fighting for independence. In fact, Zurabishvili offered to allocate a place in Vake Park to commemorate Georgian soldiers fighting for independence. But Gulbaat Rtskhiladze condemned the initiative as an attempt to take down and erase “the only monument” marking the victory in the Great Patriotic War.

Temur Pipia, leader of the United Communist Party of Georgia, voiced the same position and said in the interview with Georgia and World that a rally would be held in front of the presidential palace on May 9.

Temur Pipia: “We will visit the palace of so-called Menshevik Salome Zurabishvili with red flags and remind her of her ancestors fighting on the side of fascists, while our ancestors were defending homeland. We will remind her of how we, Bolsheviks, expelled her dirty and treacherous Menshevik ancestors.”

Pipia also spread an announcement about the rally on his Facebook page, using a frame created by Politicano on his profile picture. 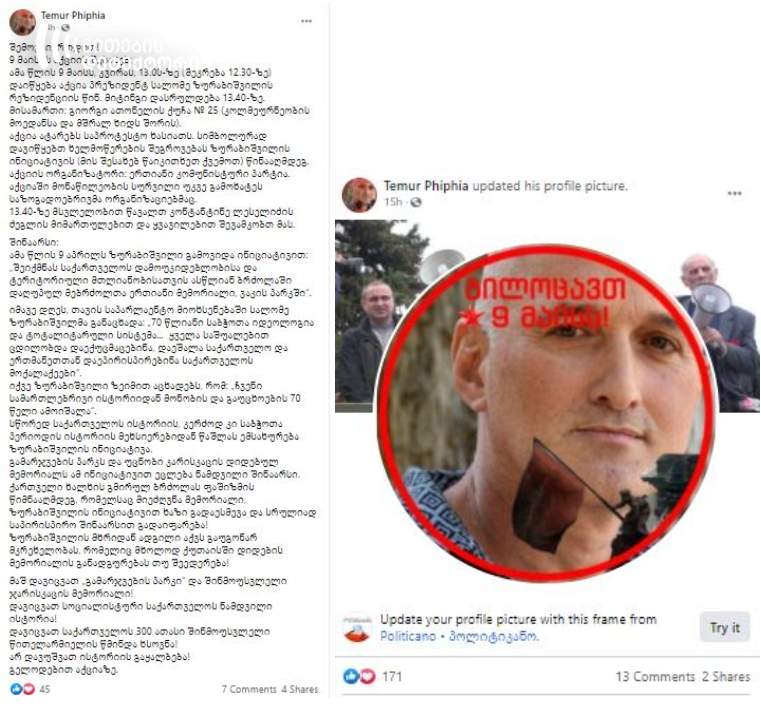 With May 9 nearing, Facebook page Politicano, affiliated with the Primakov Russian-Georgian Public Center and News Front Georgia, also intensified its efforts on social media. Citing the need “to recall history”, the page initially published posts on Soviet Union’s contribution to defeating Nazism, the Red Army’s liberation mission and European countries’ failure to resist enemy, and then shared a Facebook profile frame depicting the Soviet flag over the Reichstag and congratulated people on May 9 in advance. 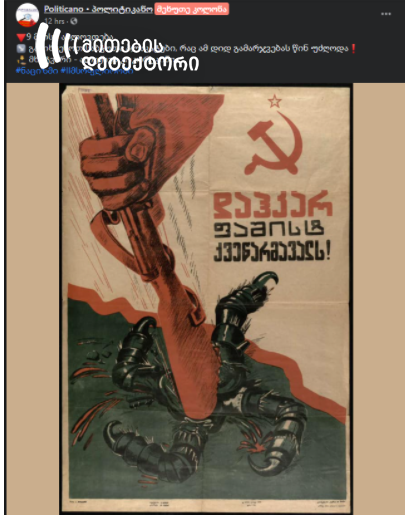 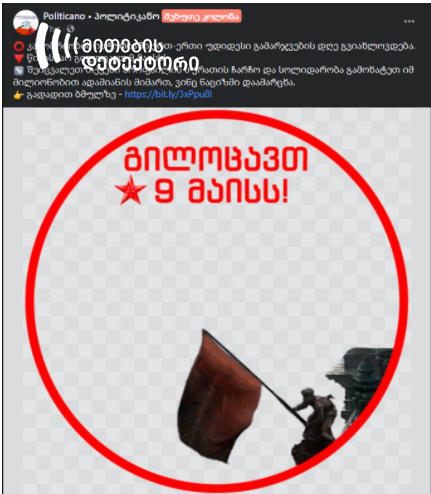 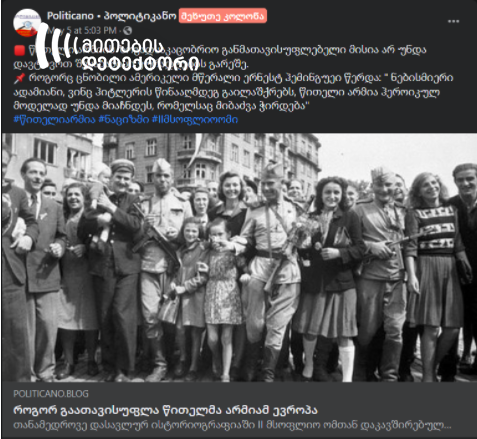 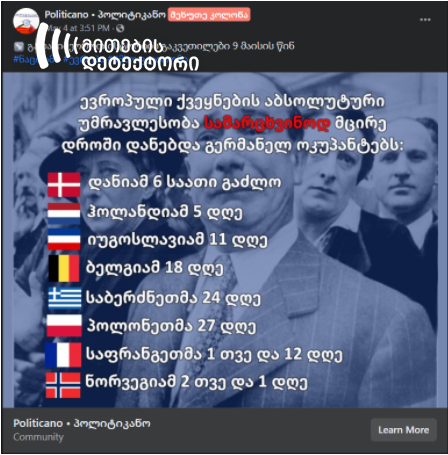 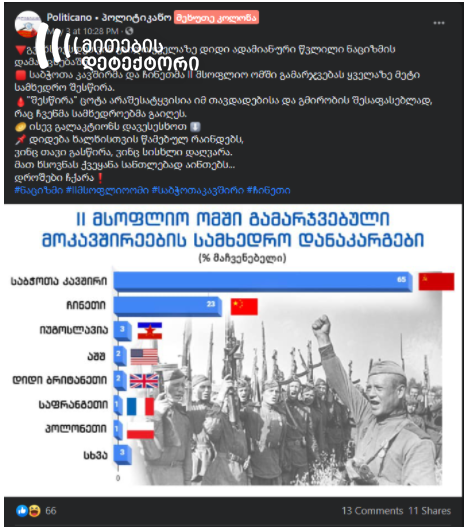 #СтройБессмертногоПолка – a straight line of Immortal Regiment in Russia

Although COVID-19 cases are growing in Russia with 8,386 new cases and 376 new deaths reported within 24 hours, a military parade will still be held in the country on May 9. Its first rehearsal was held on April 5.

See detailed information about the importance of May 9 for Putin’s policy and the events held in Russia during previous years in Myth Detector’s article:

May 9 and Immortal Regiment in Georgia

“Immortal Regiment has an immense potential of international cooperation for protecting the historical truth and collective memory, for rapprochement of nations and strengthening the bilateral trust.”

The Immortal Regiment first appeared in Georgia in 2017. The march of the Immortal Regiment is the main political activity of “Russian World’s” partner organizations operating in Georgia. On May 9, 2019, the anti-occupation movement held a counter rally holding NATO posters and photos of Giorgi Antsukhelidze, who was tortured and killed during the Russian-Georgian war in 2008.

See the video about political motives behind the Immortal Regiment, which has been created by Myth Detector within the framework of an awareness raising campaign:

Unlike former Soviet republics, Western Europe marks the day of victory over Nazi Germany on May 8. May 8 or May 9 – this issue remains a matter of dispute in Georgia. See detailed information in Myth Detector’s earlier articles: