Who is Vyacheslav Borisov and Who Disseminates His 2012 Statement about the Russo-Georgian War? 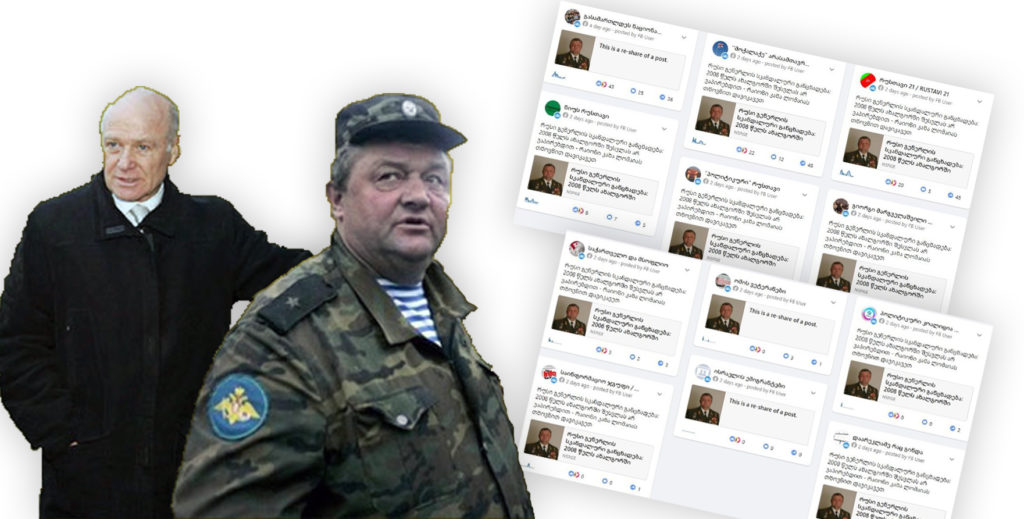 On August 17, 2020, a news agency NSP.GEpublished an article titled “Scandalous Statement by a Russian General: We Were Not Planning to Enter Akhalgori in 2008 – We Occupied That Area Per Kakha Lomaia’s Request”. The article cites Vyacheslav Borisov, Major-General of Airborne Forces of Russia, whose interview was printed in a newspaper „საერთო გაზეთი“ (Common Newspaper):

The interview that this article is based on was published in Common Newspaper in a September 26, 2012 issue. NSP.GE “revived” the given news after eight years, on August 17, in a rubric called “News Retro Media”. 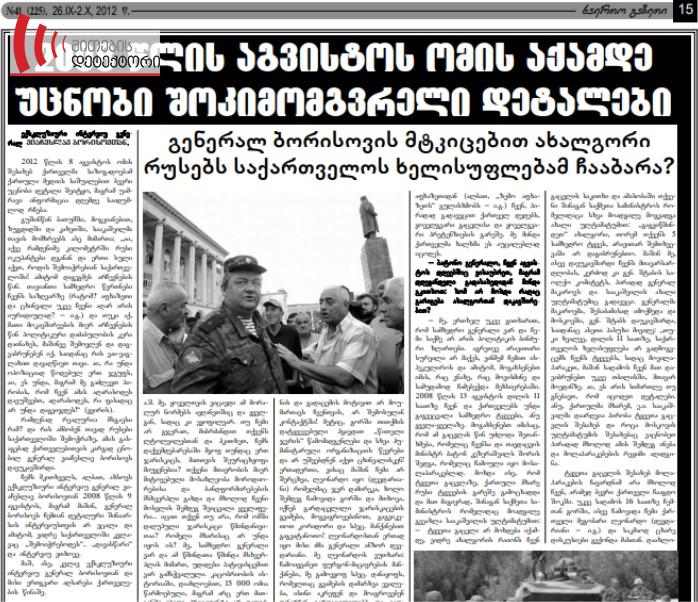 The text by the news agency that tries to put the responsibility for the intervention of the Russian Army in Samachablo on the Georgian side has been disseminated in a coordinated manner. 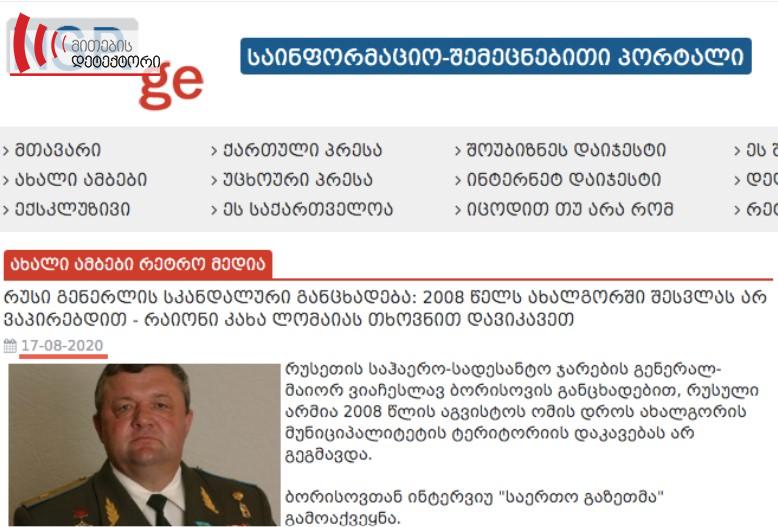 Who is Vyacheslav Borisov?

Vyacheslav Borisov, Major-General of Airborne Forces of Russia began his “relationship” with Georgia in 1998, when he was appointed the Head of the 12th Russian Military Base in Batumi. After assuming the position, he became openly supporting Aslan Abashidze and in autumn 1999 he turned against the Shevardnadze government. During the 1999 Georgian parliamentary election, Borisov officially supported Aslan Abashidze and the “Batumi Alliance”. Subsequently, the Shevardnadze Government officially asked the Government of Russia to recall General Borisov for openly interfering in the domestic affairs of Georgia. In 2000, Borisov was transferred to North Caucasus, but in 2001 he returned to the 12th Russian Military Base in Batumi.

On May 29, 2002, Borisov was interviewed by «Парламентская газета» (Parliamentary Newspaper), where he said: “Our bases are stuck in Shevardnadze’s throat like a bone and he has no other choice but to make peace with it. I, for one, do not stand out with diplomatic statements and it looks like I will once again be announced as a persona non grata – just like on three different occasions already. However, if Russia pulls out its bases, then the entire territory of South Caucasus, from the Black Sea to the Caspian Sea, will burst into war”.

Following this interview, the Shevardnadze government once again criticized Borisov for making statements beyond his competences. In 2002, Borisov once again left Adjara.

Vyacheslav Borisov appeared once again in the Georgian media in January 2010, when the Ministry of Internal Affairs of Georgia arrested 13 individuals connected to Main Intelligence Division of the General Staff of the Ministry of Defense of the Russian Federation on charges of espionage. Petre Devrishadze, a businessman and a Russian citizen, who was among the detained, pleaded guilty. Search of Devrishidze revealed a business card of Vyacheslav Borisov in his wallet.

The editorial board of «Эхо Кавказа» (Echo of Caucasus), a Russian subdivision of Radio Free Europe / Radio Liberty with a focus on Georgia, contacted the Russian General via telephone in 2010 concerning his alleged ties with Petre Devrishadze.

Vyacheslav Borisov: “I do not deny it, I know him well. He used to live in the same house as Aslan Abashidze. He is a respectable person. I have had conversations and drunk beer with him, so what?! What kind of information could he have given me, when I was serving there and knew what was going on in Georgia better than him”? 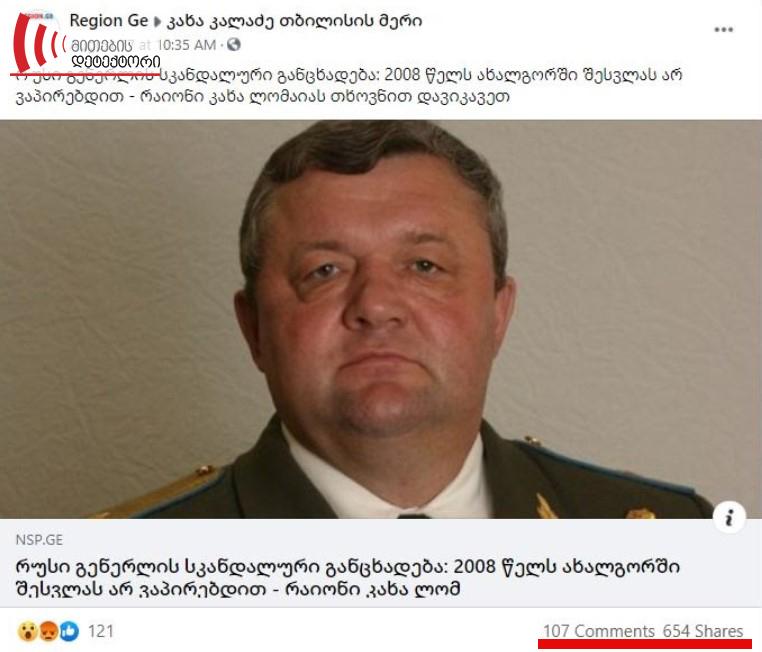 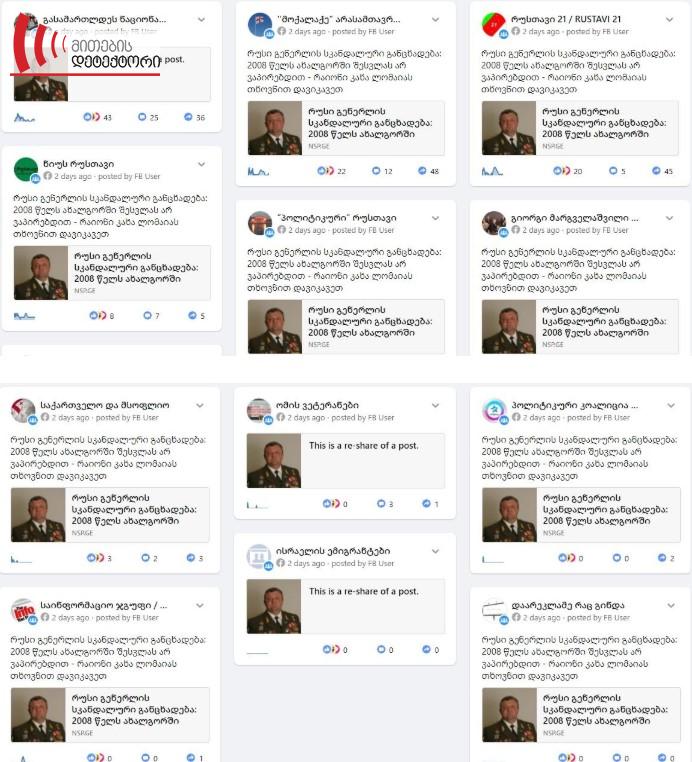 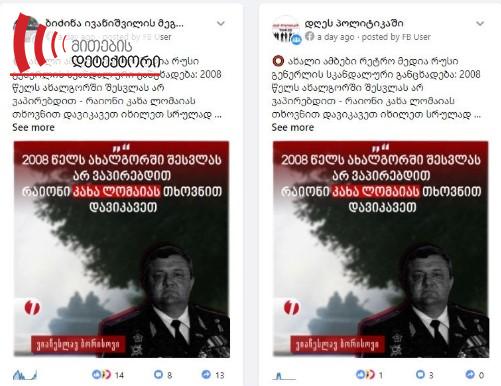 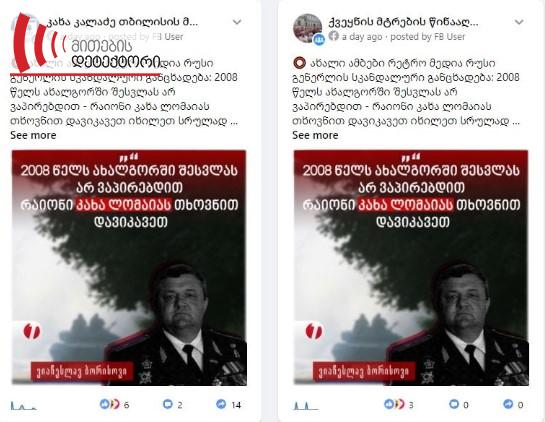 The given news was also published on the webpage of a pro-Russian media outlet Saqinform on August 18.

The article has been written with the help of Crowdtangle, a Facebook analytical tool