Who is the Ukrainian “Taira” Whom Russian-language Sources Accuse of Murder? 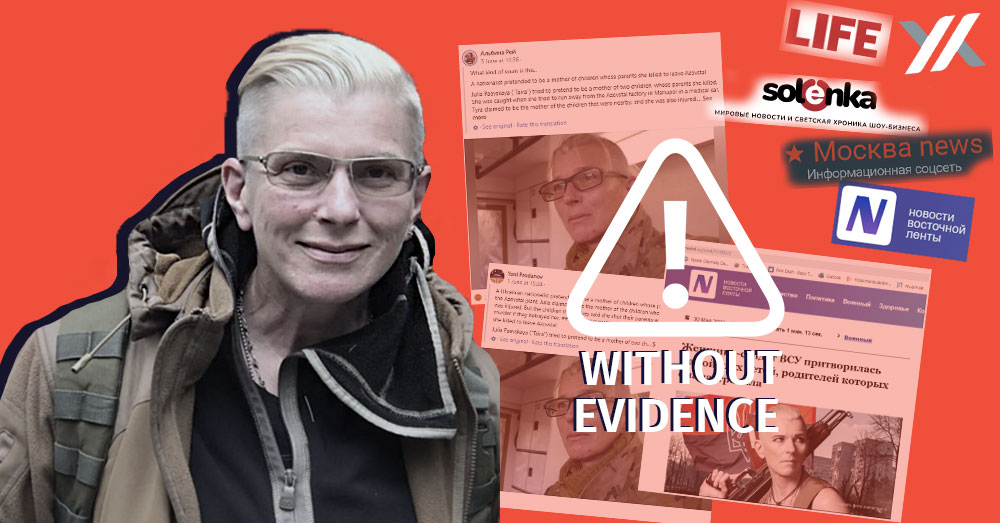 On June 1-3rd, 2022, Russian-language Facebook users (Альбина Рой, Yani Prodanov, Olga Syomkina,) have disseminated the information that while fleeing from Azovstal, the Ukrainian nationalist Yulia Paevskaya pretended to be the mother of children whose parents she herself had killed. On June 1st, posts with similar content were published in the Facebook groups НОВОСТИ И ПОЛИТИКА, Биолаборатории США 🔥‼ , United Russians Australia.

Information about the Ukrainian woman was also published by Russian online outlets (moskva.news, life.ru, solenka.info, novostivl.ru, yakutsk.ru) from May 29th to June 1st, noting that the nationalist who fled from the Armed Forces of Ukraine threatened the children not to reveal that she was not their real mother.

The information disseminated by Russian Facebook users and news agencies that during the evacuation from Azovstal, Yulia Paevskaya posed as the mother of the children whose parents she killed has no evidence. Paevskaya is a well-known Ukrainian volunteer paramedic who helped civilians, children and soldiers during the eight years of the war in Donbas. Since February 2022, she has been volunteering in Mariupol.

Yulia Paevskaya was detained by Russian armed forces on March 16th at around 4:00 pm, along with her driver, while she was on her way to provide medical assistance to victims of the Mariupol bombing.

This was initially reported by the Ukrainian volunteer Oksana Korchinska. In a video message, Korchinska stated that Paevskaya had saved the lives of many civilians and soldiers in eight years, and in recent months she had helped the wounded in Mariupol.

What do Russian sources say about Taira?

It is important to underscore that the information presented in Russian sources varies across platforms. For instance, one video that was circulated in April stated that while trying to leave Mariupol, Taira was travelling by a civilian car with two children; According to the same video, the children who were with Paevskaya accused her of killing their parents, saying that the woman killed their parents and threw them out of the car. Notably, neither these nor other sources include the stories of the children themselves. In the same video, Taira herself says that the girl was 2.5 years old and the boy was 5-6 months old. Given the language and communication skills of a child of this age, it is unlikely that the children would be able to tell such a story, not to mention, unlike the above-mentioned video, other Russian-language sources noted that when leaving Mariupol, “Taira” moved using an ambulance, and not a civilian car.

In parallel, Russian-language sources (tsargrad.tv, ntv.ru) ccuse Taira of being a nationalist and a member of the Azov Battalion, although her connection with the Azov Battalion has not been confirmed. Yulia Paevskaya worked in the Armed Forces of Ukraine from 2018 to 2020 and returned to sports after an injury. She is also the president of the Ukraine Aikido Federation. Taira is a participant and winner of many Paralympic competitions. During the years of the war in Donbas, Yulia, together with her team of volunteers, saved hundreds of wounded soldiers, volunteers and civilians. Paevskaya is also the recipient of the “National Hero of Ukraine” award.

What does the Associated Press say about Taira?

On May 20th, the US news agency Associated Press published a story based on footage filmed by Ukrainian paramedic Yulia Paevskaya, showing her treating the wounded in Mariupol before being taken prisoner by the Russian army. Before her arrest, Paevskaya managed to hand over 256 GB of camera footage to journalists covering her activities in the besieged city.

The published footage presents some of the stories of what happened in the first weeks of Russia’s invasion of Mariupol. Yulia Paevskaya helped not only the Ukrainian military and civilians but also Russian soldiers. The video filmed by Taira shows her, along with Ukrainian civilians, trying to rescue wounded Russian soldiers. For example, a video taken on March 10th shows two Russian soldiers being roughly pulled from an ambulance by a Ukrainian soldier. One of them is in a wheelchair, the other is on his knees, his hands are tied, and he has a wound in his leg. The Ukrainian soldier insults her, and “Taira” tries to calm him down and says:

“They won’t be so kind to us, I can’t do anything to them, they are prisoners of war.”

A couple of hours later, a brother and a sister are shown, who are severely injured by the shooting and whose parents have died. The doctors try to save the boy, but he dies.

What do people who were familiar with Taira say?

On May 30th, the #SaveTAIRA campaign was launched on social networks, under which the Ukrainian military, volunteers, politicians and public figures demand the immediate release of Yulia Paevskaya, who was illegally detained on March 16th. Mariupol resident and nurse Yekaterina Sukhomlinova stressed on her Facebook page that since 2014, Yulia Paevskaya has been rescuing the wounded and has saved up to 600 people during the war in Donbas. According to Sukhomlinova, for 73 days (as of May 28th), she has been held captive by Russian invaders and does not even receive medical care. Russia may not include “Taira” in the list of prisoners for the reason that she was a paramedic and is protected by the Geneva Convention as a non-combatant.

“Myth Detector” contacted Ekaterina Sukhomlinova. According to the Mariupol nurse, Yulia Paevskaya is not a Nazi or a fascist, but a doctor and a saviour of people’s lives.

Ekaterina Sukhomlinova, Nurse: “Yulia is a volunteer doctor. She never took weapons, trying to save wounded civilians and soldiers. I did not witness her detention, so the Russians can develop any story. Paevskaya is not a murderer!!! I personally have seen how she saved the lives of the wounded. I often met her in Mariupol hospitals, where she brought the wounded. The fact that Russia lives in a different reality does not require any proof.”

According to the spouse of Yulia Paevskaya, Vadim Puzanov, who is currently in the Ukrainian capital Kyiv, Yulia and her driver were stopped and detained during the evacuation of women and children in the humanitarian corridor between Mariupol and Zaporozhe.