Who is the “Black-shirted” Denying the Holocaust using the Propagandist Film of the SS? 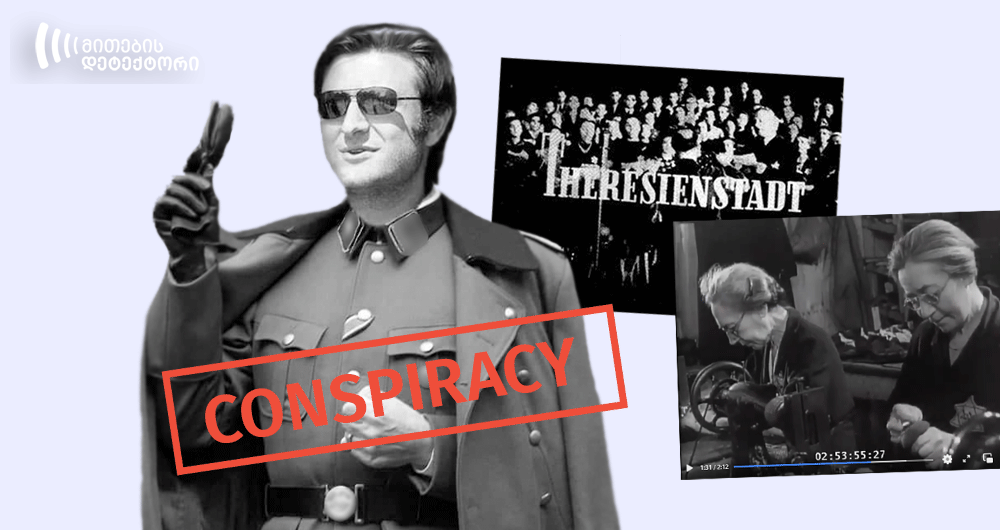 On July 22nd, Facebook user Tornike Vashakidze published a video displaying people occupied with different tasks. According to the description, the footages portray the events of Nazi Germany’s Buchenwald Concentration Camp in 1939, while the video itself was discovered in the Austrian National Archive in 1956. The author of the post claimed that the video represents a clear demonstration that the Holocaust has never occurred, the mass-killing and torture of millions is made up and represents a part of large-scale propaganda. 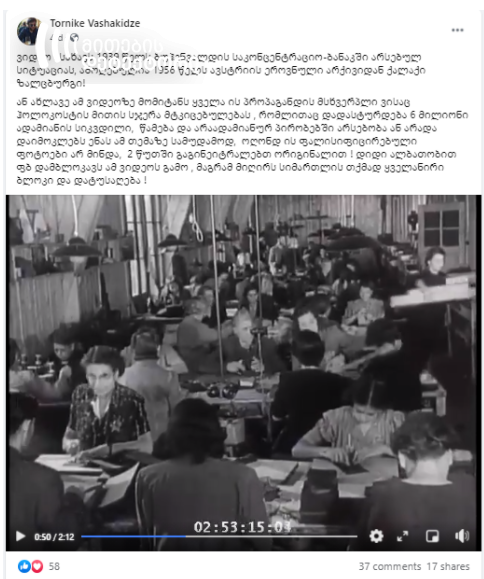 The video published by Tornike Vashakidze does not portray the events of the 1939 Buchenwald Concentration Camp. In reality, the footage is taken from the propagandist movie made in the Theresienstadt Ghetto in 1944-1945 by Nazi Germany, where the SS forced the prisoners to participate in the propagandist movie. The conspiracy about the inauthenticity of the Holocaust has been prevalent for years now. In reality, however, no clear evidence can be found to calculate the exact number of holocaust victims. By using the combination of various sources, scholars and researchers estimate that the number of victims is around 6 million.

The video published by Tornike Vashakidze represents the fragment of the propagandist movie “Theresienstadt” – filmed by the German paramilitary organization “Schutzstaffel” in 1944-1945.

Organized by the SS, Theresienstadt became the primary site for filming in 1944. The film aimed to show the international community that the Jewish prisoners lived and worked in good conditions. To illustrate the following, the film also included the scenes of a football match and a classical concert.

The prisoners were forced to participate in the movie. Following the order of the SS, the Jewish cast was led by the German Jewish actor and director Kurt Gerron. Because of his ethnic background, Gerron was also a prisoner at the Theresienstadt Ghetto. The technical side of the movie was completed by the Czech company “Aktualita.” The filming ended in March 1945; however, after World War II, the full version of the movie disappeared. Nonetheless, a couple of fragments constituting around 20 minutes were discovered in several archives. These fragments were later used to create the documentary about Theresienstadt, which also involves the interviews with the survivors and showcases the number of victims to this establishment only.

Around 144 000 prisoners were sent to Theresienstadt, some 33,000—almost 1 in 4—died there, and about 88,000 were deported to Auschwitz and other death camps. Most of them, including Kurt Gerron – were later murdered in Auschwitz.

The Holocaust was the systematic persecution and murder of six million Jewish men, women and children by the Nazi regime and its collaborators. The Nazis, who came to power in Germany in January 1933, believed that Germans were “racially superior,” and they wanted to create a “racially pure” state. Jews, deemed “inferior,” were considered an alien threat to the so-called German racial community.

According to the British National Archives, during the holocaust, due to their “inferiority,” other ethnic groups were also targeted by the Nazi Regime. These groups included Roma people, Germans with disabilities, some Slavic nations (predominantly Polish and Russians). Several groups have also been exterminated due to the incompatibility of political, ideological and identity traits. For instance, Nazi Regime often targeted Communists, Jehovah’s Witnesses and Homosexuals.

Determining the exact number of Holocaust victims is practically impossible, as there is no official document created by the German authorities displaying the total amount of murders.

Since 1940, Scholars and researchers have utilized the combination of various sources. Predominantly, the archives of the “Euthanasia Program” represent the primary sources for identifying the approximate number of victims. American soldiers accidentally discovered these archives in Austria. According to one of the documents, in the framework of the program, only in 1940, 35 000 people were killed.

The map displayed below was entered into evidence at the Nuremberg trial. The map shows the area between the German-Soviet Demarcation Line and the area of the farthest German Army advance in the Soviet Union at the time. A Summary Report of charts, maps, analytical reports and illustrations was compiled by SS-Brigadier General Stahlecker. This information was presented to the Reich Security Main Office in Berlin in February 1942. All of the deaths recorded on this map occurred between June 22, 1941, and January 31, 1942. The map reports the killing of around 81 629 and the identification of 128 00 Jews in the selected territory. 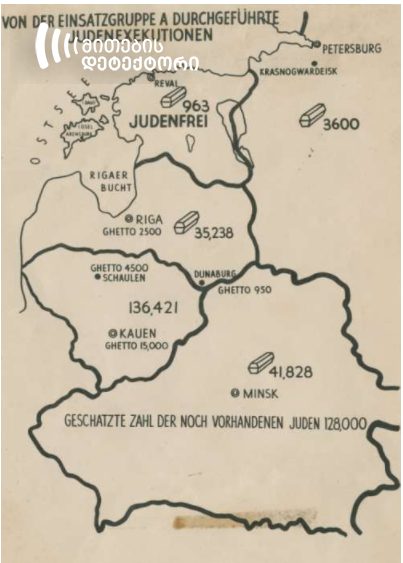 Tornike Vashakidze is the co-founder and deputy leader of the “National Socialist Movement of Georgian National Unity.” 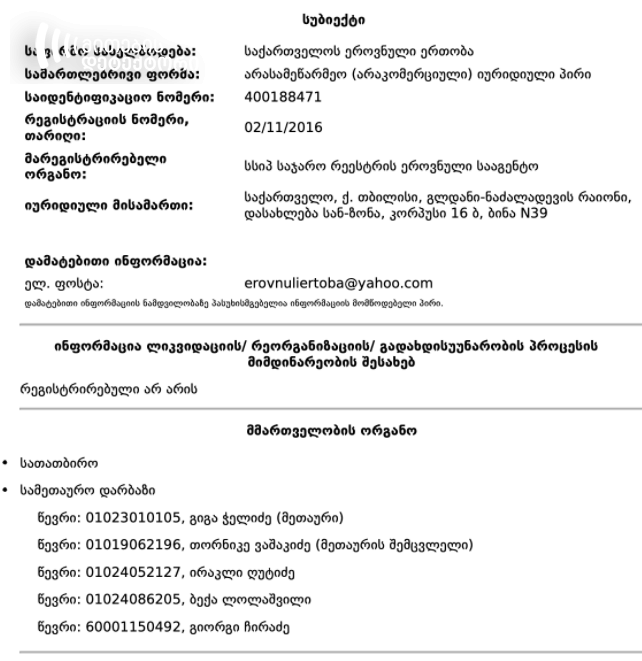 On May 12-13th, the members of the selected movement clashed with the participants of the pro-drug policy-change demonstration and announced the potential creation of squads against them.  At that time, the leader of the “Georgian National Unity” was Giga Chelidze, who, together with Vashakidze, was questioned because of participating in the violent counter-demonstration of May 13th, 2018. In August same year, Giga Chelidze was arrested for the illegal purchase, storage and carrying of firearms and ammunition. 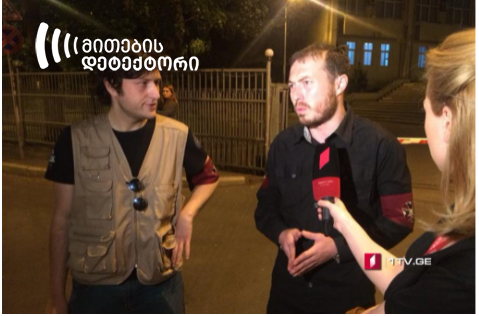 Tornike Vashakidze was leading the fascist organization special unit called “Blackshirts.” On May 17th, 2018, together with the “leader of an ideological branch of Black-shirted,” Irakli Ghutidze, the MIA of Georgia arrested Vashakidze for hooliganism and disobedience to police. He often appears in public wearing fascist symbols. 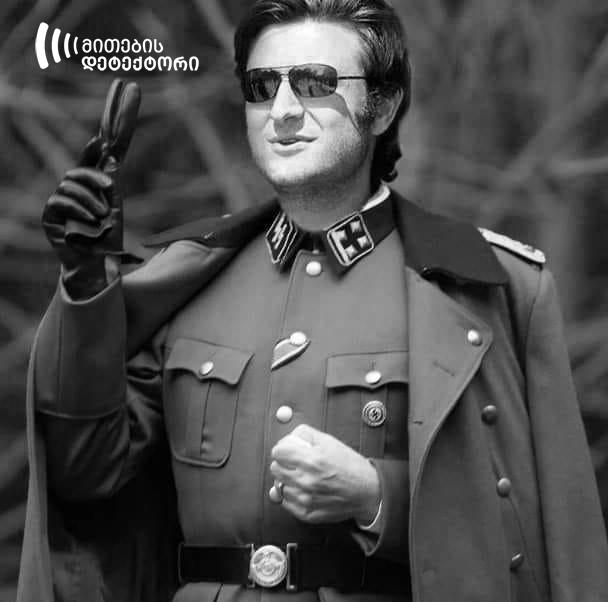 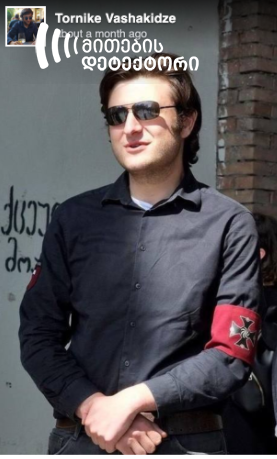 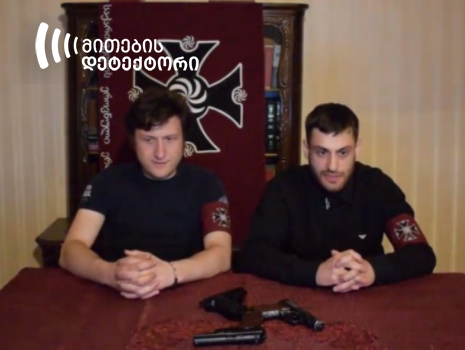 Tornike Vashakidze is one of the admins of the Facebook page “Georgian Nationalism.” 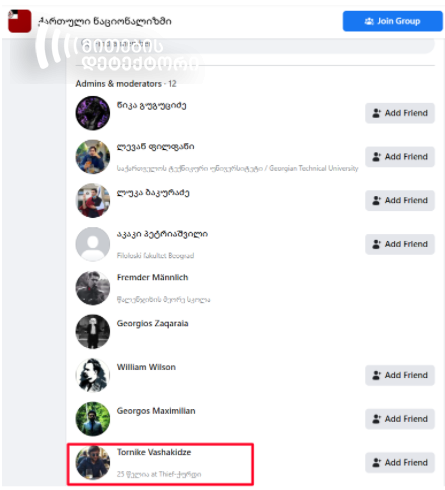 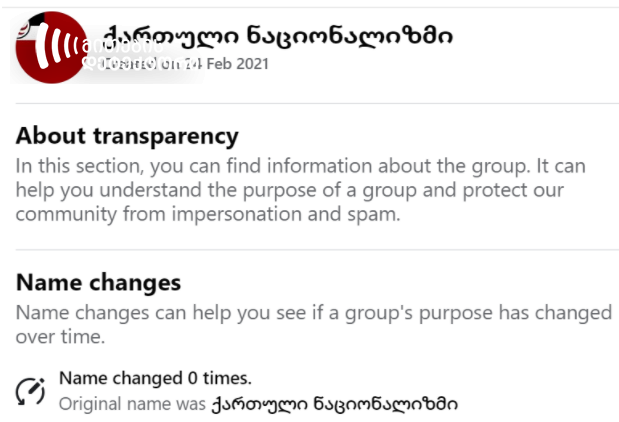 According to the clarification of Luka BAkuradze, another admin of “Georgian Nationalism,” the group represents the part of the newly-created Youth Nationalistic Union.

Tornike Vashakidze actively supports the people participating in the violence directed against journalists on July 5th, even Davit Kutaladze, who is accused of attacking Aleksandre Lashakrava – the deceased cameraman of “TV Pirveli.” He has also shared a picture with Enri Oniani, who participated in the violent counter-demonstration on July 5th. 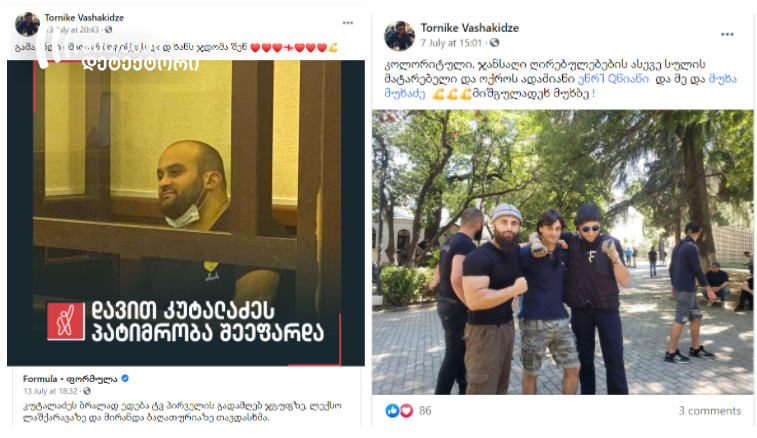