Who is Spreading Conspiracies About an Expired Russo-Georgian Agreement?

On July 27, Arno Khidirbehishvili, the Editor-in-Chief of Saqinform, mentioned in his article published on Saqinform that Mikheil Saakashvili signed an agreement that allows Russia to demand from Georgia to allow a passage of military cargo through its territory under force majeure situations. An internet-program “Salte” disseminated identical information on July 19, where the host of the program and a former member of the Alliance of Patriots, Soso Manjavidze and his guest, Vakhtang Maisaia, expressed an opinion that the passage of military cargo from Russia to Armenia based on the 2006 agreement still takes place even today. They label the agreement as “Agreement between Georgia and the Russian Federation on Organizing the Transit of Military Cargo and Personnel via the Territory of Georgia”. According to Manjavidze, the Russian military equipment appeared on the territory of Georgia in 2016. Based on this, both Manjavidze and Maisaia suppose that this agreement was secretly extended first in 2011 and then in 2016, which would mean that Russia is allowed to transport the military cargo through the territory of Georgia until 2021. Vakhtang Maisaia also adds that in the framework of this agreement, the transit of military equipment from Russia to Armenia did not stop even after the 2008 Russo-Georgian War, despite the fact that the Paragraph 4 of the Article 4 allowed Georgia to terminate the agreement.

On July 16, in an interview with Echo of Moscow, Maxim Shevchenko, a Kremlin-affiliated journalist, also spread the information related to Georgia’s “duty” to allow Russia to transport military cargo. In the context of intensification of the Nagorno-Karabakh conflict, Shevchenko recalled the agreement, signed by Georgia and Russia in 2006 that allowed Russia to transport military cargo to Armenia. He also added that the situation in the Caucasus can be significantly aggravated if Russia demands a “military corridor” for its military cargo to Armenia based on the agreement signed by Mikheil Saakashvili and the Government of Russia.

The statements by Vakhtang Maisaia, Maxim Shevchenko, and Arno Khidirbegishvili about Georgia having a commitment towards Russia for allowing the transit of military cargo and personnel to Armenia based on the agreement signed in 2006, is false. The agreement was annulled in 2011, after its term expired. In addition, Maisaia and Manjavidze develop a conspiracy theory that the agreement was secretly extended for five years in 2011 and, possibly, in 2016 as well. However, it is possible to annul the agreement every year after the expiration of the five-year term. The statement of Maisaia and Manjavidze according to which Georgia allowed the transit of the military cargo even after the 2008 Russo-Georgia War, despite the possibility to enact the Article 4 of the agreement and cancel it, is false too. In fact, the agreement does not mention terms for termination, whereas the Article 4 only allowed Georgia to refuse transit. According to the previous government, Georgia has not allowed the transit following the Russo-Georgian War.

1. The 2006 Russo-Georgian Agreement that allowed Russia to transport the military cargo and personnel through the territory of Georgia was cancelled in 2011 and today, there can be no ground for the transit of the Russian military cargo to Armenia.

The 2006 Agreement between Georgia and the Russian Federation on the Organization of Military Cargo and Personnel Transit Through the Territory of Georgia that allowed Russia to supply its 102nd base in Gyumri, Armenia, was annulled on November 1, 2011. In 2006, this Agreement was signed in Sochi in parallel with Russia’s withdrawal from its military bases in Georgia.

On April 19, 2011, the Parliament of Georgia issued a resolution concerning the termination of the given Agreement.

According to the information available on the Legislative Herald of Georgia, the agreement was finally annulled on November 1, 2011, based on a letter №3/3006-14from the Ministry of Foreign Affairs. 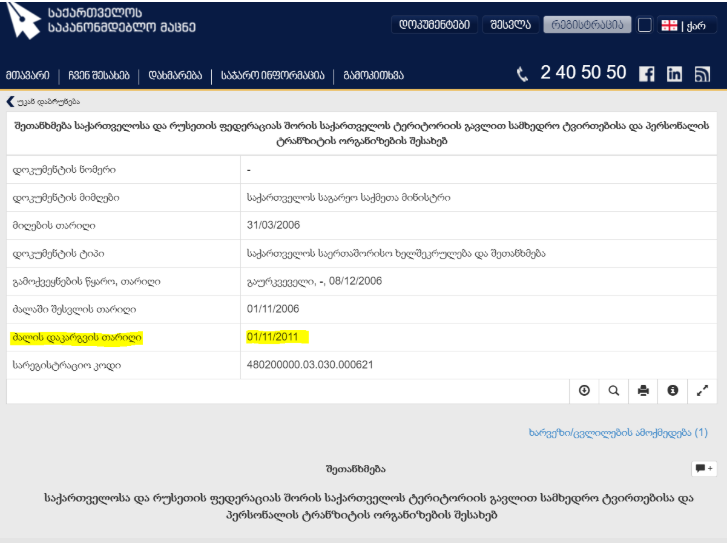 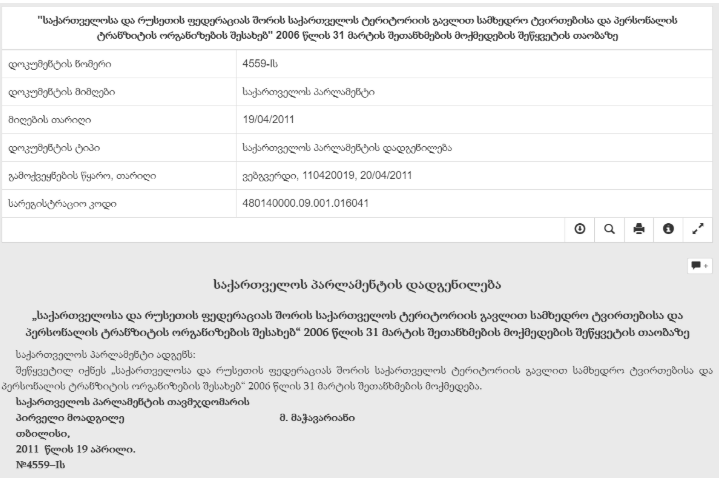 A document, prepared in 2016 for the Subcommittee on Security and Defence of the European Parliament, mentions that Russia’s 102nd base is supplied by air via Iran.

2. Vakhtang Maisaia’s conspiracy that despite the formal termination of the Agreement on Transit with Russia, Georgia extended the Agreement for five years in 2011 and 2016, contains factual inaccuracies as well.

After the expiration of the five-year term of the Agreement, Georgia had the right to review its right to extend it once in a year. According to the Article 15, the Agreement would have been automatically extended by a year each time one of the signatories failed to notify the other party on annulling the Agreement six months prior to the end of the term.

Why was not the Agreement annulled after the August War?

3. The Agreement does not include a clause related to a premature termination. The Article 4 envisages Georgia’s right to deny transit. According to the previous government, it did not issue the transit right to Russia after the August War.

Vakhtang Maisaia mentions that Georgia could terminate the Agreement following the August War based on the Paragraph 4 of the Article 4. In fact, the Paragraph 4 of the Article 4 defines those conditions, under which Georgia could deny Russia the transit. Such conditions included a conflict with the interests of Georgia and a martial law in the country of destination.

The Government of Georgia was allowed to deny transit under the following circumstances:

In 2011, when then President of Georgia, Mikheil Saakashvili proposed an initiative on terminating the given Agreement to the Parliament, as Radio Liberty reports, then Deputy Foreign Minister of Georgia, Nino Kalandadze stated that Georgia had not allowed Russia the transit to Armenia since July 2008.

Vakhtang Maisaia was arrested in 2009 on the charges of spying for Russia. In 2013, he left the penitentiary as a political prisoner. Vakhtang Maisaia served as an advisor in the Georgian Diplomatic Mission to NATO in 2004-2008. Both prior to and after his arrest, he has made several comments in the Georgian media related to the military sphere.

Maxim Shevchenko is a host at the Channel One Russia who has been denied entry to Georgia with the purpose of attending a Kremlin-planned media forum in Tbilisi due to violating the Law of Georgia on Occupation. Foreign media has labelled him as a Kremlin-affiliated journalist. He has served as a member of a human rights council that was subordinate to the President of Russia.