Who is Natia Colussi, and how is she linked with “Cancel Cancel Mafia for Georgia”? 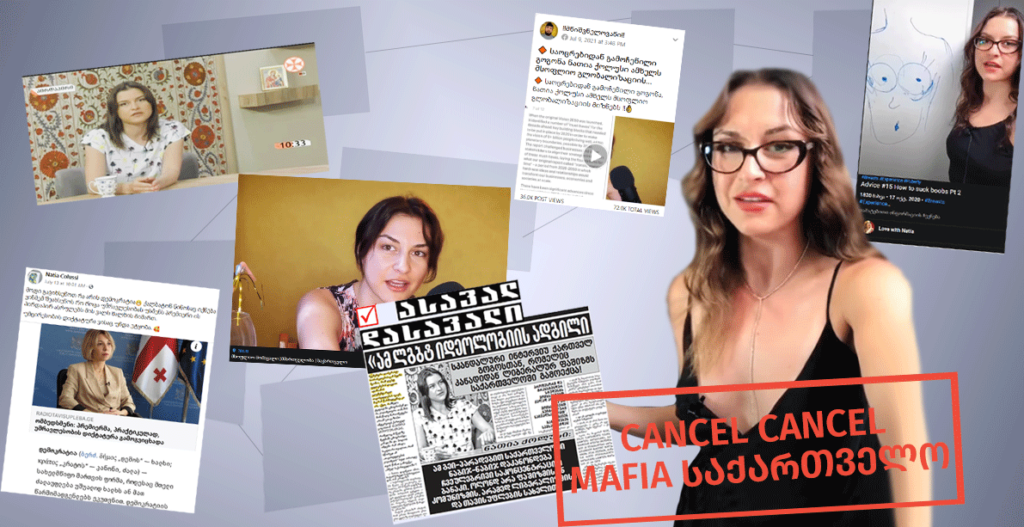 Blogger Natia Colussi obtained large-scale exposure to Georgian social media after publishing a video named “Very Unpopular video: Plans behind the March for Dignity” on July 7th. Following the forced cancellation of the “March for Dignity, mass violence against journalists, repression of LGBTQ+ activists and raging homophobic discourse, the video rapidly became popular among the masses.

Apart from Pride-related issues, vlogs and Facebook posts of Colussi cover a wide range of topics from sexual relationships to religion and global warming. Moreover, in selected cases, Colussi has attempted to justify the actions of the Government and the Orthodox Church. Apart from conspiracy theories, Colussi has also voiced several messages:

Natia Colussi shortly became involved not only with the outlets connected with pro-Kremlin actors and violent groups but also with the Governmental and Church media. In particular, the following actors were giving screen time to Colussi and sharing her online content:

The Facebook group named “Cancel Cancel Mafia for Georgia” no longer operates; nonetheless, its existence becomes relevant for several reasons. The group was specifically created to report Facebook posts and was administered by Natia Colussi and Tornike Samanishvili. Samanishvili’s profile clarifies that he is a supporter of Vasadze’s radical media platform “Alt-Info.” He shares Alt-Info’s videos regularly and has even affiliated himself with “Alt-Info” in one of the interviews for Tabula TV. 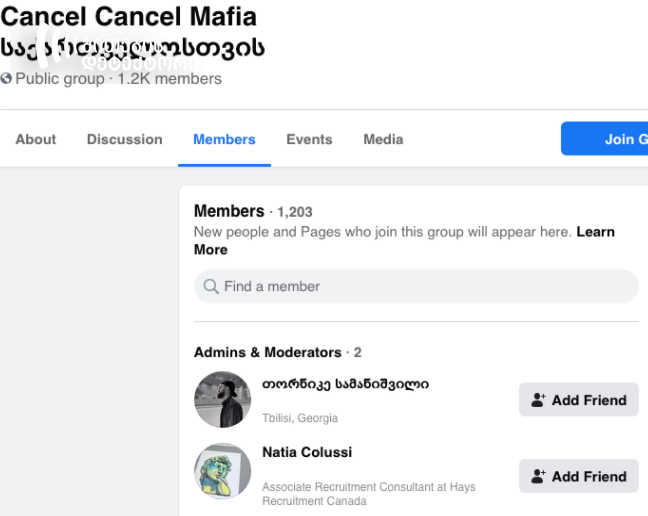 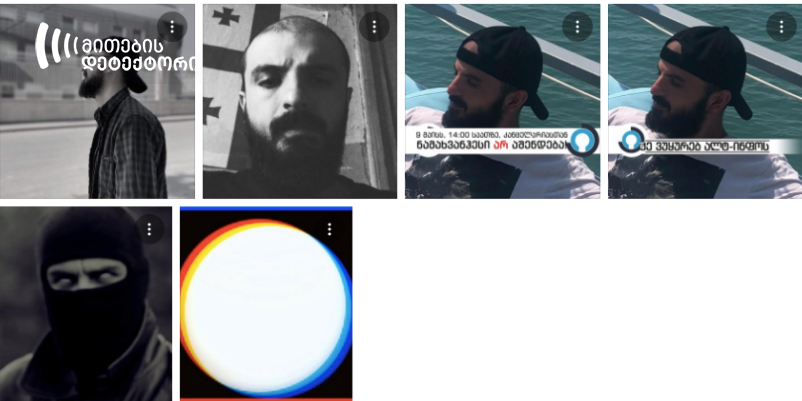 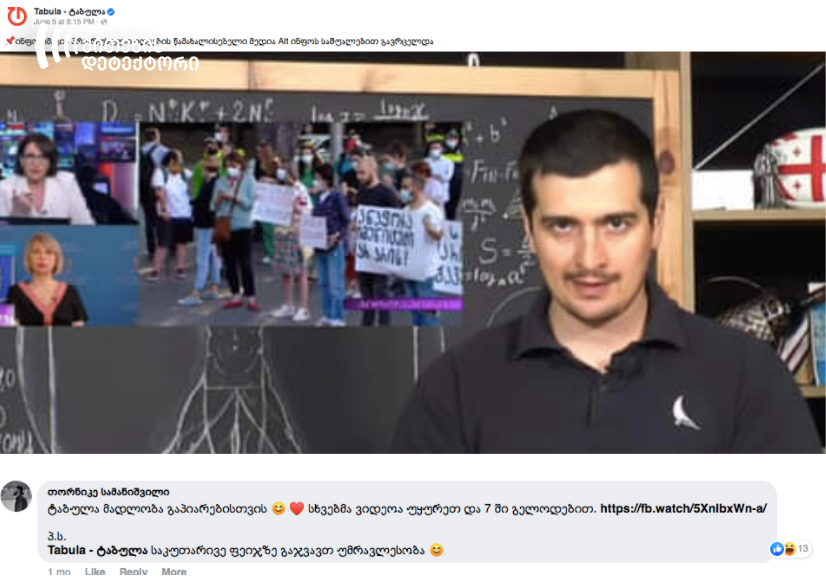 One of Samanishvili’s posts published in “Cancel Cancel Mafia for Georgia” clarifies that the group aimed to systematically report all the unwanted posts on Facebook. The post claims that Fact Checkers (Facebook partner fact-checking organizations) cannot be reported; therefore, it would be more essential to focus on reporting others and avoid using hate speech not to get blocked. In addition, Samanishvili advises using a specific link while reporting something. 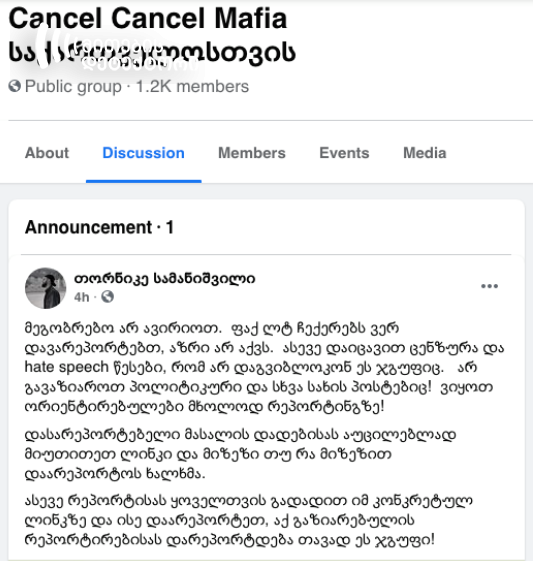 The information about Facebook blocking the group for its content was shared by Colussi herself. The Facebook group was deleted because of violating the community guidelines of the website, since coordinated reporting is an unauthentic action.

Colussi’s interest in collective reporting persisted even after creating her new Telegram channel, “Lover of truth.” On her channel, she asked how to create a page that would contain all the data about the pages that needed to be reported.

Natia Colussi, Blogger: “Now is not the time to start investigating which priest drives what kind of a car or owns what kind of a house… Stop looking at the priests and go to the church and let’s pray (…) we don’t have time to criticize the priests; this is what I am saying.”

As a demonstration that the churches are being attacked, Colussi shared misleading information about the burning of churches in Canada.

Natia Colussi, Blogger: The ones who fight for the protection of LGBT rights  do not really plan to protect the rights of gays and lesbians. Instead, they want to enslave the whole world population using them! (…) I warn Georgia, progressive parts of the society, you are the puppets used in the theatre play portrayed as a fight for LGBT rights, which consequently aims to gain total control on humanity.” [Asaval-Dasavali, July 12-18]

Natia Colussi, Blogger: [Aleksandre Lashkarava] was beaten, and because of this play, they needed a sacrifice, so they probably killed him. These people will now be sentenced for murder instead of physical violence. Panic will be spread among people that this crowd has to be stopped and protests in the name of the EU and peace will start.” [Telegram Channel, Lover of Truth, July 11] 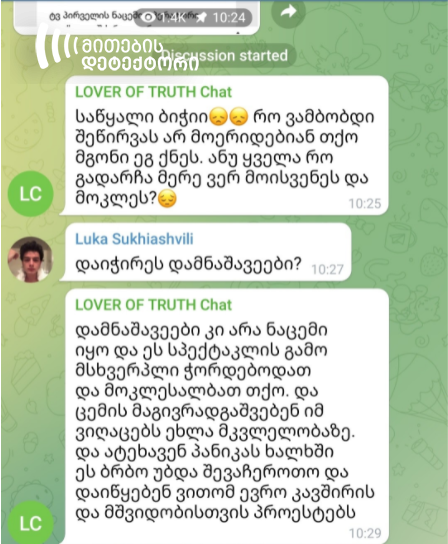 Natia Colussi, Blogger:“I would not be surprised if the person who wounded the tourist and some others who initiated the fight were bribed and sent there intentionally. I am not talking about everyone who was aggressive, but the main actors.” [Personal Facebook page]

Natia Colussi, Blogger: “I don’t want to be a colony of neither Russia nor the US and Europe! I want us to live with Christian traditions and raise the future generations using these traditions.” [Asaval-Dasavali, July 12-18]

Colussi had even tried to defend the Prime Minister of Georgia when the Public Ombudsman criticized him for his statement about considering the interests of the majority and disregarding the constitutional rights of the minority. Colussi has reminded Nino Lomjaria of the definition of democracy:

Natia Colussi, Blogger: “Let’s remember what democracy is. Can someone even remind Ms Nino that when the Prime Minister listens to the majority, he directly fulfils his obligations towards them? It is evident who wants the dictatorship of the minority.” [Personal Facebook page, June 13]

Natia Colussi, Blogger: “[Vision 2050] was writing on this even before. “How to avoid the next pandemic.” Or what would happen in the world if a pandemic occurred or something of that kind. They were writing about these topics explicitly, and people were calling it conspiracy theories, and then COVID happened. This was all about COVID, without naming it as such.”

Natia Colussi, Blogger:“World Government is being formed very rapidly, and this Paris Agreement about the ideal world is the main agreement for this.” Google Vision 2050 and compare it to the promises of Bolsheviks. [Personal Facebook page, July 2]

For more details about Colussi’s conspiracies about Vision 2050, see the article of Myth Detector.

Natia Colussi, Blogger:“It doesn’t matter how many facts you show to these fact-checkers, you can’t convince them since they don’t want to hear the truth. They aim to obtain an informational monopoly and, accordingly,  establish a totalitarian regime. We have to somehow remove this communism machine from Georgia. We can push them back to wherever they came from…”

The information about Natia Colussi visiting the TV Channel of the Georgian Patriarchate was shared by the Alt-Info-linked Facebook user Beka Vardosanidze several times.

The video of Natia Colussi, where she spreads different conspiracies about Global warming, was also published by the Alt-Info-tied Facebook page – !!Important!! and shared by the Facebook page of the party “Georgian Idea.” Currently, the video is deleted from the page. 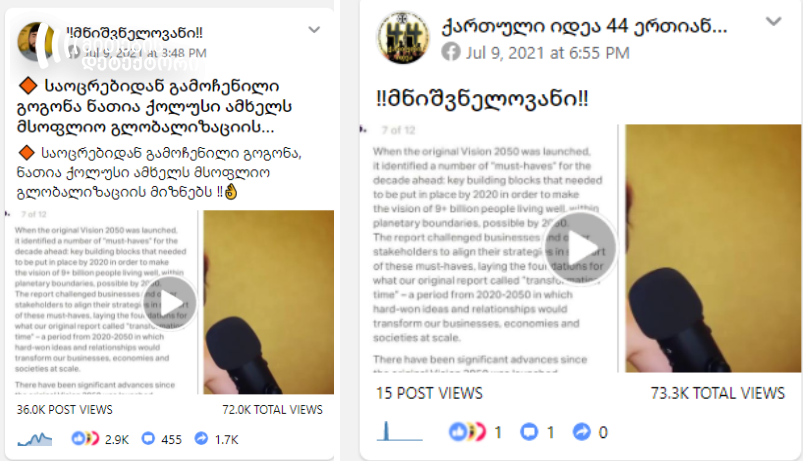 The videos of Natia Colussi visiting the TV channels were also shared by religious Facebook pages, including the official pages of the public relations offices of the Tchkondidi Eparchy. and Facebook pages

The video of Colussi’s interview with “Ertsulovneba” has been shared in sharply anti-oppositional groups. Facebook user Mindo Mandela has used the caption “Our girl has appeared!” and shared the video in two of the mentioned groups. (United National Movement Should be sentenced! “The way of truth”).

The video of Colussi’s interview with “Ertsulovneba” has been independently uploaded by the page “Capital” and later shared into different other groups, including conservatives, Unity of all Georgians, Levan Vasadze and the National Wing; Protect our Nation, Land and Religion and Anti-Masonry.

There are three independent YouTube channels connected to Natia Colussi. Two of them operate in the English language, while the remaining third is in Georgian. All three of the channels drastically differ in content.

For the last couple of years, Natia Colussi has been living in Canada. Before moving there, she has been actively engaged in various events organized to support women’s rights. Alongside her Canadian spouse Adrian Colussi, she is the owner of Jinjer Peronali Ltd, registration documents of which reveal her original surname – Pashurishvili. 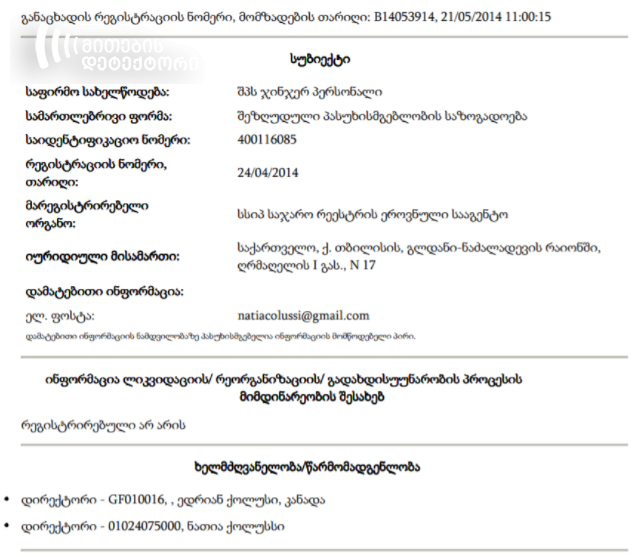 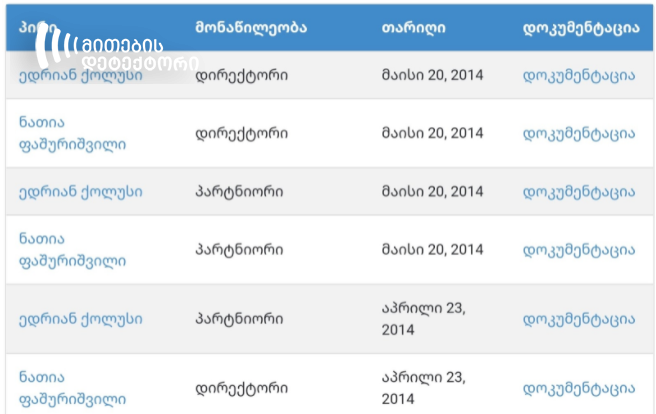 Natia Colussi signed the petition created in June 2015 demanding the resignation of Soso Jachvliani for his sexist and discriminatory statements regarding the EBRD. 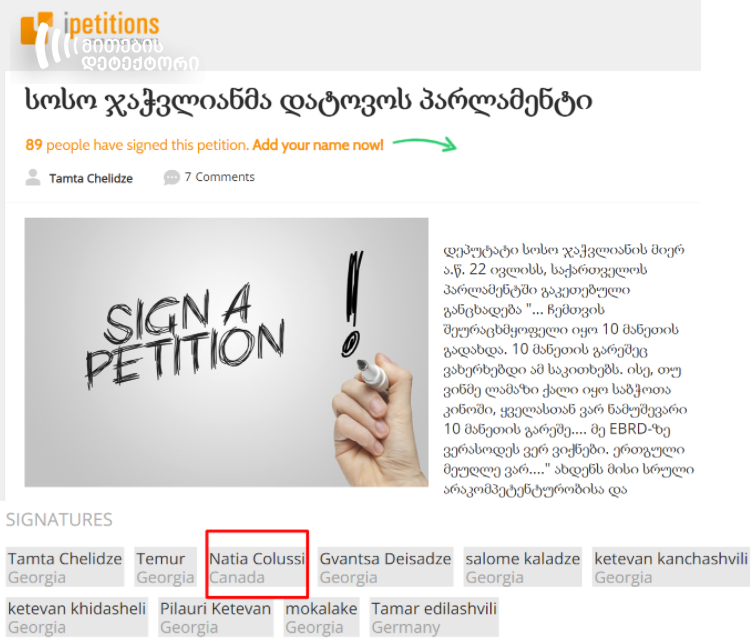 One can also find a 2014 video of Colussi, where she protests the violence against women and demands ending it.

According to the video published on Colussi’s TikTok account, she returned from Toronto to Tbilisi in April 2021. On May 5th, she proclaimed that from today onwards, she would only make videos about religious topics aiming to educate the youth.