Who is Afraid of NATO and U.S. Bases in Georgia? 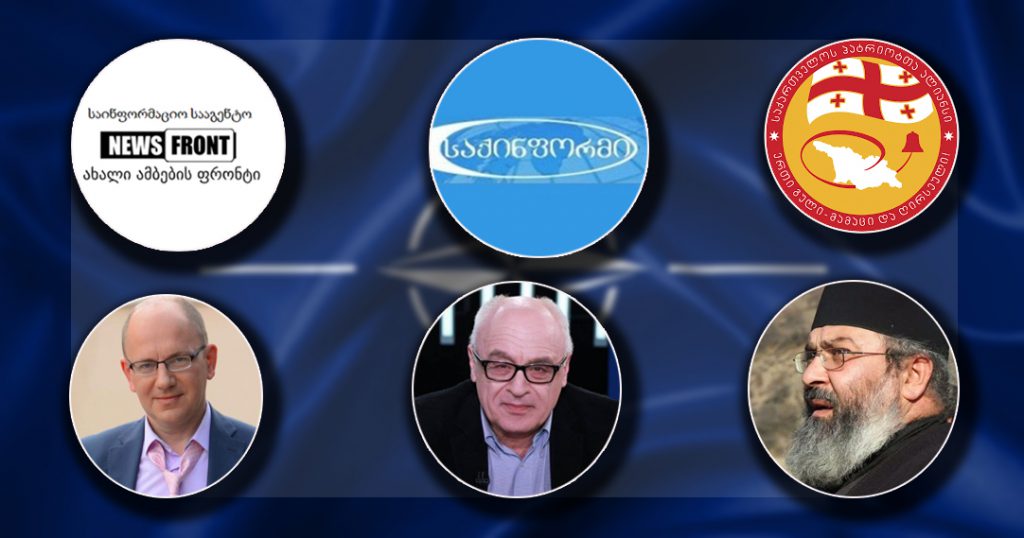 On October 24, 2019, Luke Coffey, expert at Heritage Foundation, wrote on his Twitter about possible deployment of U.S. troops in Georgia. According to Luke Coffey’s proposal, “US troops leaving Syria could be sent to Georgia and become an “over the horizon” force to respond quickly if ISIS reconstitutes.” He also added that USA could use old Russian base at Akhalkalaki. Coffey, however, noted that the U.S. government does not discuss this proposal.

Luke Coffey’s proposal triggered a new wave of propaganda against NATO and the United States by pro-Kremlin actors and its satellites in Georgia. Along with the attempts to incite skepticism and nihilism towards Western partners, conspiracy theories and fake reports were also spread aimed at inciting fear among Georgian citizens, as well as strife on ethnic grounds.

The Myth Detector offers you the key messages spread about the alliance and the United States, as well as their sources.

Luke Coffey voices ideas of the Armenian lobby in the United States, Syrian Armenians will be resettled to Javakheti

This conspiracy theory was published on the Georgian-language website of pro-Kremlin online media outlet News Front on October 25, a day after Luke Coffey tweeted about his proposal. According to News Front, Luke Coffey voices the ideas of the Armenian lobby and actually, it is planned to resettle ethnic Armenian refugees from Syria to Javakheti. News Front does not refer to the source of information. The conspiracy theory is based on the fact that Nersi Nazari, chairman of Vital Connect, is a person affiliated with Heritage Foundation. News Front supposes that it was just Nazari who hinted to Luke Coffee, prompting the latter to voice the idea, providing unjustified conspiracy theories to the readers and inciting artificial fears and xenophobia. The same conspiracy theory was spread by Giorgi Maglakelidze of the Alliance of Patriots party in the interview with Obieqtivi TV.

News Front: “Coffey voiced the idea of the Armenian lobby – possible resettlement of the Armenians to Javakheti should occur under the cover of the U.S. military base – if an American base is deployed in Akhalkalaki, it will be accompanied by “civilian auxiliaries” composed of ethnic Armenians.” 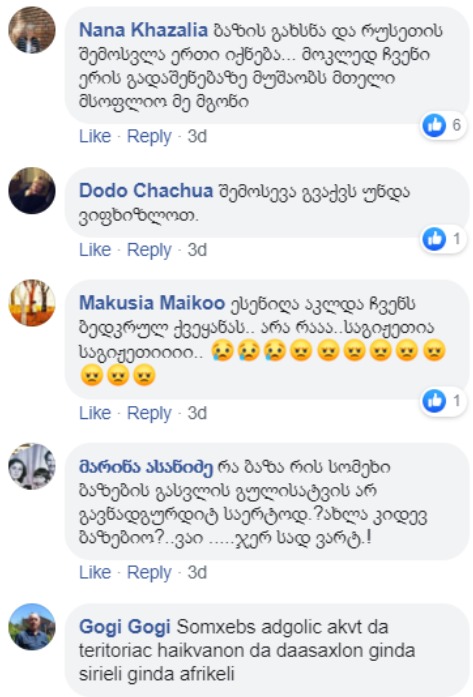 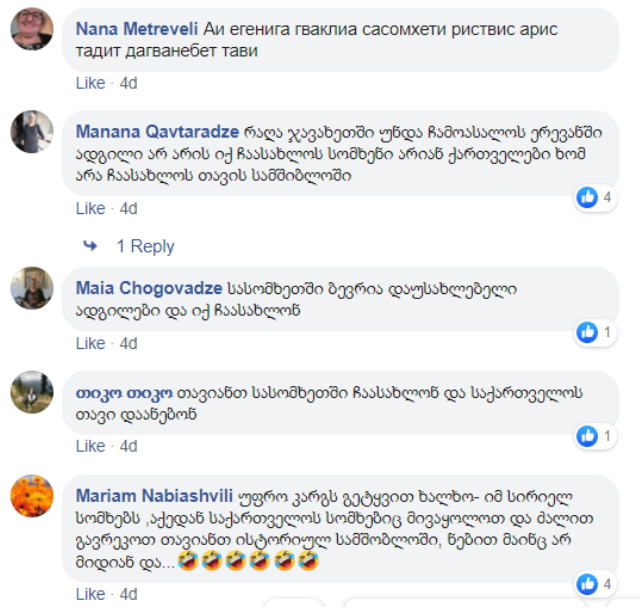 Gigi Maglakelidze, Alliance of Patriots of Georgia: “If such base, a military base is deployed in Samtskhe-Javakheti, I suppose that it may become a stronghold and let me say bluntly that a lot of Armenians live in Syria, hundreds of thousands or even over half a million… so, if they have a guarantee, a stronghold will be created under the U.S. flag or its military flag or military army.”

Turkey will control Adjara, Adjara will be vacated by Georgians

Following Coffey’s proposal, an old message was reactivated, according to which in case of aspiring towards NATO, Turkey, together with Russia, will take control of Adjara. In the article released by Sakinform on October 25, the news agency’s editor, Arno Khidirbegishvili compared Turkish control over Adjara to Turkey’s attempts to vacate the demarcation line from Kurds, as if Adjara will be vacated by Georgians in a similar way.

Sakinform: “Instead of asking Russia for help in resolving the territorial problems with Abkhazia and South Ossetia, our government reiterates as if being bewitched – we need NATO! Then they should not be surprised if Russia, together with Turkey, takes control of Adjara, like they launched joint patrolling of a 30-kilometer demarcation line vacated by Kurds, south from the Turkish-Syrian border.”

Inciting skepticism: Anyway, we will not be accepted to NATO/the U.S. base will not be deployed/nobody listens to the American political analysts

Irma Inashvili, leader of the Alliance of Patriots party, News Front, Sakinform and pro-government expert Gia Abashidze are inciting skepticism towards NATO and the United States. Irma Inashvili said that Coffey’s proposal is “absurd” in itself. She compared the U.S.-Georgia partnership to the developments in the Middle East, noting that the United States failed to protect even their strategic ally, Kurds.

News Front dedicated a video to Georgia’s NATO aspirations, according to which Georgia’s welfare is not in the interests of the United States; moreover, Anders Fogh Rasmussen, former NATO Secretary General, allegedly offered NATO membership to Georgia in exchange for giving up Abkhazia and South Ossetia. Rasmussen’s statement, which was later followed by manipulative interpretation, was assessed by Gia Abashidze, who said that this “distorted reality” is created by the National Movement and its satellites. He slammed political analysts, who speak about NATO-Georgia relations, as “retired top officials.” Sakinform linked the issue of the U.S. base to the position of Armenians living in Akhalkalaki, noting that the local population will not allow deployment of the U.S. base, because it is “still weeping for” the Russian base.

Irma Inashvili, Alliance of Patriots: “The Americans – and everyone can see it – failed to protect the Kurds, who were their strategic allies and partners in the fight against the Islamic State. They are brave and self-sacrificing people and have made a serious contribution to global peace. So, any talks about Akhalkalaki, any military unit are very unserious.”

Sakinform: “Is it true what U.S. expert Luke Coffey writes on his Twitter that the American contingent withdrawn from Syria will be deployed in Akhalkalaki – near the border with Armenia and 90 kilometers away from the Russian military base in Gyumri – compactly resided by Armenians, who are still expressing concerns over the withdrawal of the Russian military base owing to which entire Samtskhe-Javakheti had been employed?!”

Gia Abashidze, expert: “Rasmussen did not dare to say the same things in Ukraine, playing with Article 5… without Crimea, Donbas and Luhansk… It is a false, distorted reality what the National Movement and its satellites are doing now, as if the Americans said it, excuse me, but which American? Retired or incumbent U.S. top official? We know that lobbying first entered in the Georgian speech from the West. We have not invented this institution, lobbyism, and so on.”

Inciting fears: rapprochement with NATO contains a serious threat and will irritate Russia

NATO-Georgian relations were again discussed in Russian political context that Georgia’s aspirations towards NATO or deployment of the U.S. or NATO bases on the territory of Georgia contain a serious threat. Giorgi Maglakelidze of the Alliance of Patriots said that NATO enlargement is a red line for Russia. Political analyst Ramaz Sakvarelidze echoed his remarks, saying that Georgia’s NATO membership will cause an irreparable harm to the country.

Gigi Maglakelidze, Alliance of Patriots of Georgia: “Generally, there are serious red lines in diplomacy, which are beyond any discussion. We should know that the Russian Federation has a vision, according to which NATO enlargement and deployment of foreign bases, either of the United States or NATO, are directly linked to their security. Therefore, it poses a serious threat to future restoration of our territorial integrity, inviolability of our borders. Therefore, picking up these statements by politicians is impossible and very dangerous.”

Ramaz Sakvarelidze, political analyst: “Georgia does not suffer the lack of proposals (from the West). But granting MAP or subsequent steps contain certain threats for Georgia. Under current separation of powers, there is no chance for Georgia’s NATO membership other than the fact that Georgia will suffer an irreparable harm.”

NATO fights against identity and values

Along with various messages, fake reports were also spread about NATO during the same period. During his sermon, the video footage of which was released by Marshalpress on October 24, Archpriest Davit Kvlividze noted that NATO Secretary General Jens Stoltenberg demanded Georgia to legalize “homosexuality” as a precondition for Georgia to join the alliance. Davit Kvlividze’s statement is disinformation. The NATO Secretary General has never demanded Georgia to do it.