Who Fabricated the CNN Screenshot and how did Ulan-Bator Appear on the Map of Ukraine? 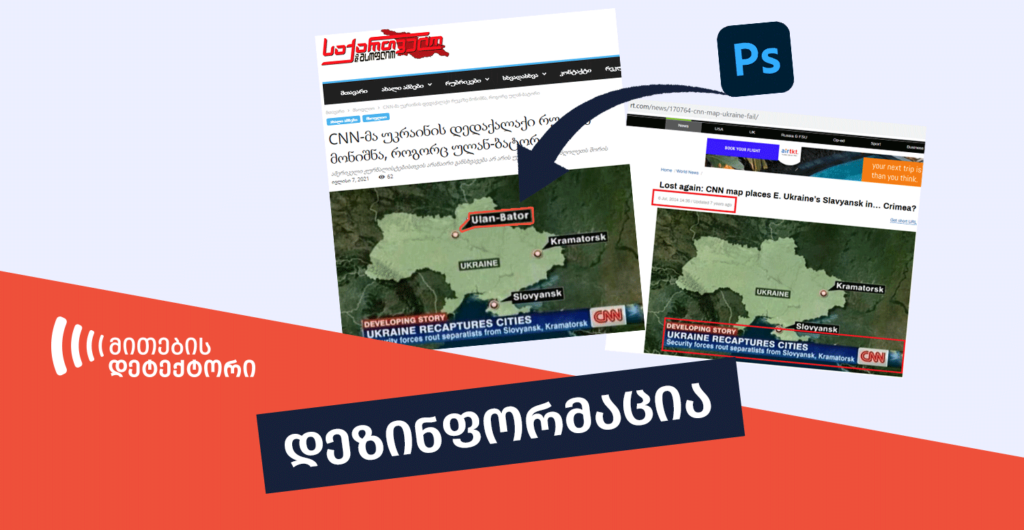 On July 7th, the online edition “Georgia and World” has published an article titled as follows: “CNN marked the Ukrainian capital as Ulan-Bator.” The information claimed that, apparently, there exists no difference between Ukraine and Mongolia since CNN mixed the locations of Kyiv and Ulan-Bator. The article was prepared based on the pro-Kremlin news-front.info and included the comment of the head of the Informational Politics Commission of the Russian Federal Council, Aleksey Pushkov. In his commentary, Pushkov ironically states that similar to all the other instructions, Ukraine has to follow this one as well and change the name of its capital. The article uses a screenshot from a CNN video, in which the name Ulan-Bator is used instead of Kyiv. 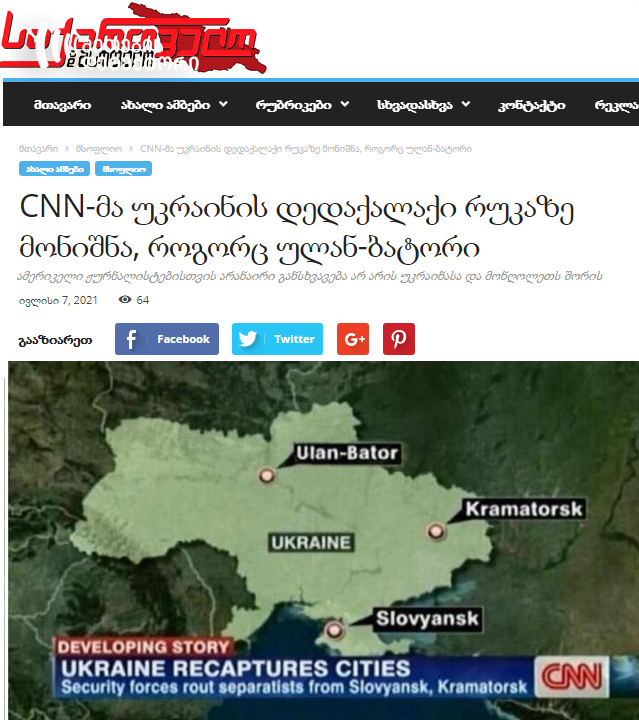 The statement about CNN mixing the names of Ukrainian and Mongolian capitals is false. In reality, the map included in the article by “Georgia and World” was used by CNN in 2014. However, the map indicated only two Ukrainian cities: Sloviansk and Kramatorsk. Sloviansk was misplaced on the map, which was actively used by the Russian media outlets to criticize the American online editions. The image with Ulan-Bator only appeared later, only after being edited in August 2014, and has never been used by CNN.

The earliest version of the map published by “Georgia and World” can be found in the June 6, 2020 article of the Russian media outlet Russia Today. The article concerns the mistake of CNN and uses a several-second shot cropped out of the CNN story. The story itself talks about the reclamation of two Ukrainian cities: Sloviansk and Kramatorsk. Its title portrays the same event: “Ukraine recaptures cities; Security forces rout separatists from Sloviansk, Kramatorsk.” The capital of Ukraine is nowhere to be seen in the video.

The reason for Russia Today using the photo and video footages of CNN is the mistake made in positioning the city of Sloviansk. In CNN’s version, the sign of Sloviansk is placed on the Crimean Peninsula, when in reality, the city is located in the Donbas region. Russia Today mocks its American colleagues for their incompetence in Geography and, in addition, publishes another photo identifying the correct location of Sloviansk. 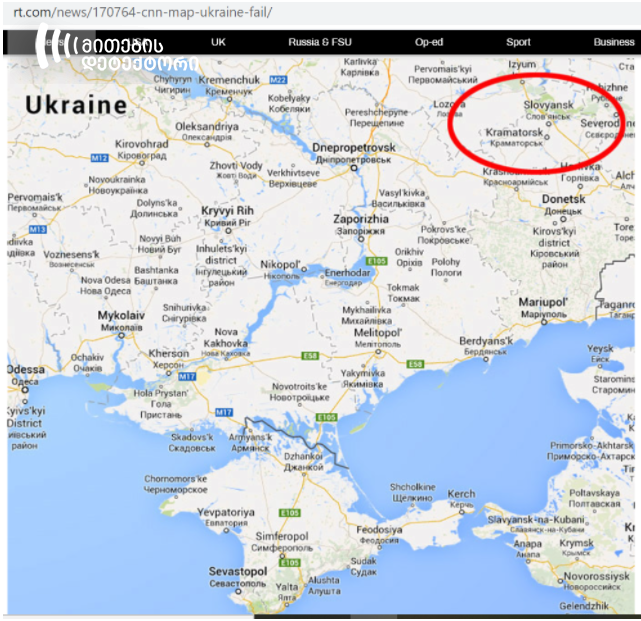 Within the same article, Russia today mentions past mistakes made by CNN, including the case when discussing the Ukrainian referendum of 2014, the channel placed the Ukrainian flag in Pakistan.

The inaccurate map of CNN was circulated among other Russian media outlets in June 2014, including Russia 24, Echo of Moscow, and vesti.ru. All of them use the identical map, in which the capital is not pinpointed; therefore, it shows neither Kyiv nor Ulan-Bator. 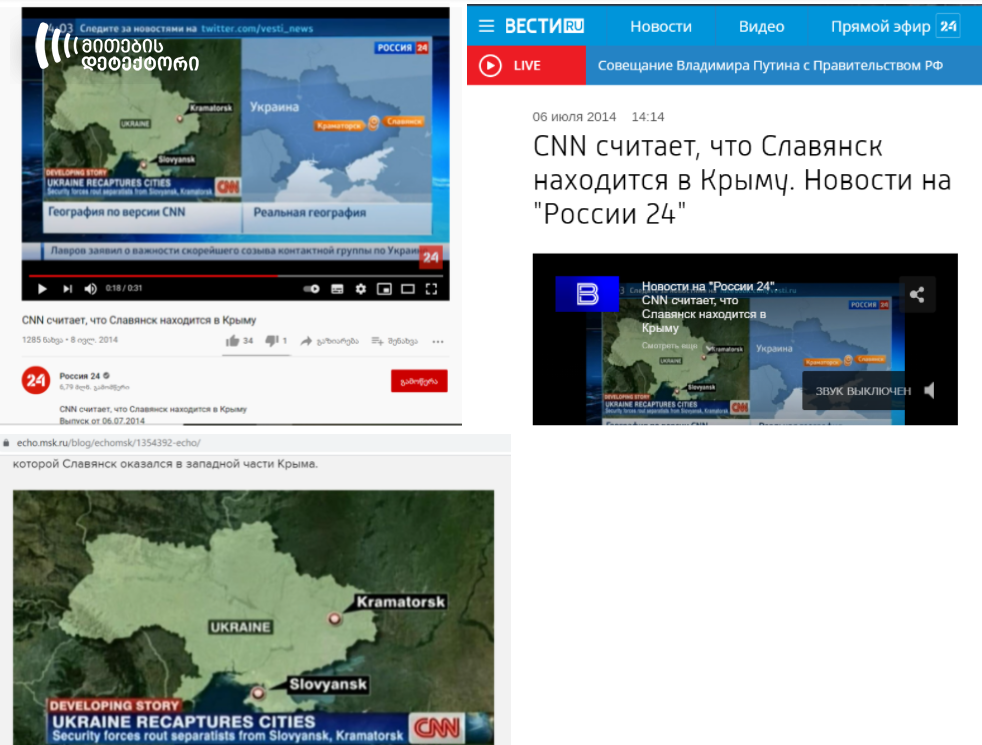 The image of the map shared by “Georgia and World,” which includes Ulan-Bator, Sloviansk and Kramatorsk, can be found on the web since August 2014. The caption of the image, as well as the markings of Sloviansk and Kramatorsk, align with the tapes of the 2014 CNN story, indicating that Ulan-Bator has appeared on the image only after the edit.On August 10th, 2014, a Twitter user Theresa Fallon shared the same image, asking whether CNN has made a geographical error once again.

The later edits made on the image can be detected by looking at other Ukraine-related stories of CNN, which usually use a star sign to identify the capital. In the selected image, the symbol of the capital is similar to the ones of the remaining cities. 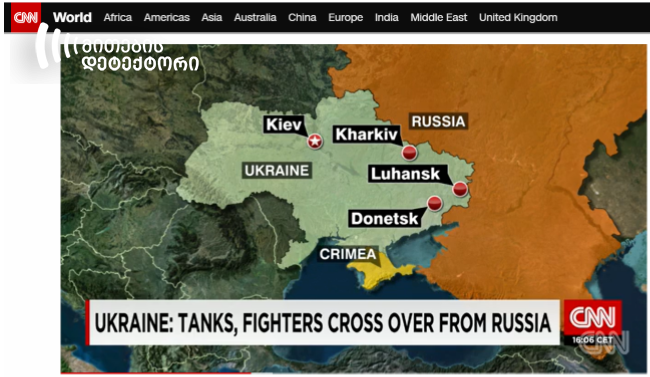 Following Theresa Fallon, on August 11th, 2014, the photo was also published by the outlets buzznews.mn and assiarussia.ru. The article stated that CNN mixed up the locations of Kyiv and Ulan-Bator.

Dissemination of the altered image in 2021

On July 26th, 2021, the Telegram user ‘Swiss Vatnik’ shared the particular version of the Ukrainian flag, which indicated Ulan-Bator instead of Kyiv. The photo was accompanied by the text, stating that while the world was watching the football match between Switzerland and France, CNN transported the entire office of Zenensky to Ulan-Bator. Hence, the description creates the impression that the map is current. 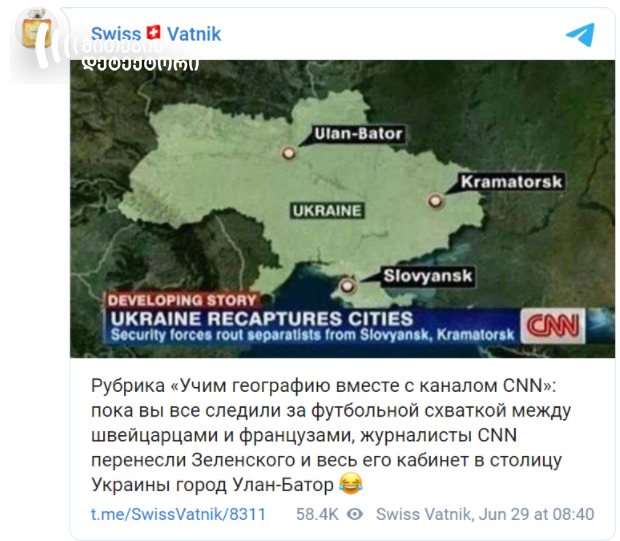 On July 3rd, a similar tweet was published by Aleksei Pushkov; however, he did not attach the picture of the map to the text.

Based on the tweet of Pushkov, other Russian language outlets such as gazeta.ru, vzglyd.ru and news.rambler.ru published the information about the alleged mistake of CNN.