Who Does Wuhan Institute of Virology Belong to and Is It Connected to George Soros and Bill Gates? 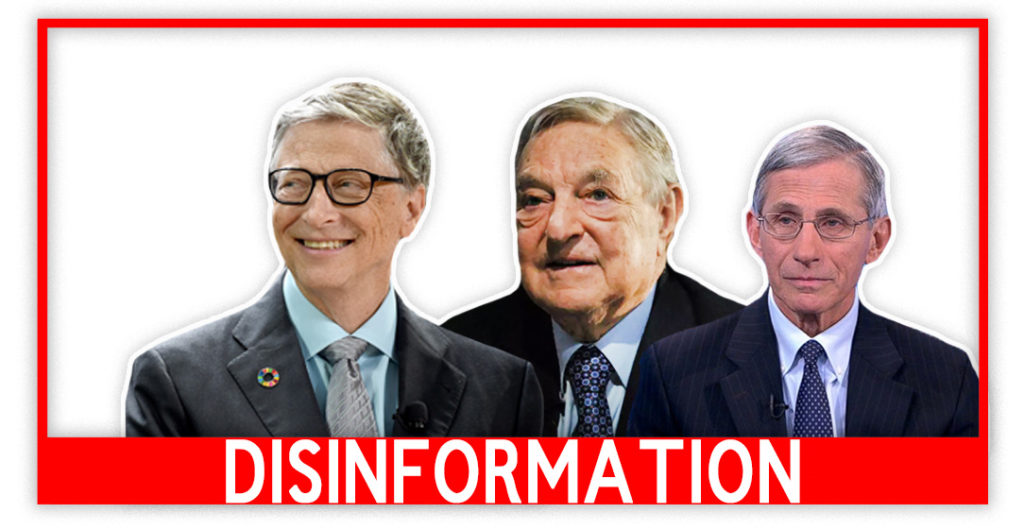 On December 12, 2020, a Facebook user Nona Bakuradze published a post about alleged financial connections between several international companies, George Soros, and Bill Gates. The author claimed that a Wuhan-based pharmaceutical company is owned by Glaxo, which is also the owner of Pfizer. Both companies are managed by BlackRock, a George Soros-owned company. The author also mentions Bill Gates, who, according to her, is the main shareholder of Pfizer. The author supposes that the aforementioned actors are connected to “Wuhan lab” (Wuhan Institute of Virology) and the dissemination of the coronavirus. 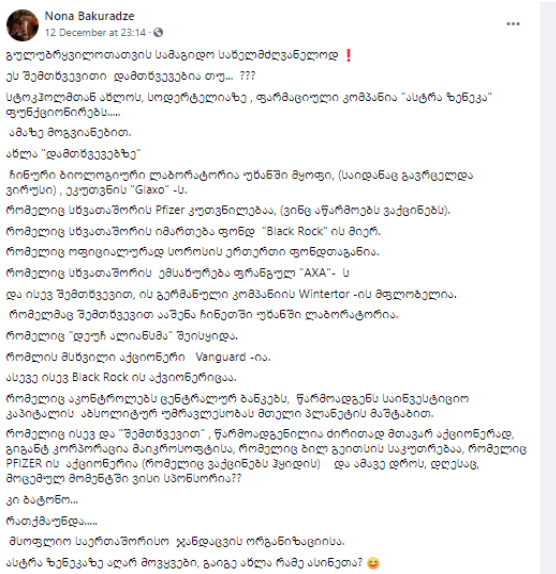 Another post, published on December 15 by a co-founder of the Union of Orthodox Parents, Avtandil Ungiadze, mentions alleged financial connections between the Wuhan lab and Anthony Fauci, the Director of the Centers for Disease Control and Prevention (CDC). The post claims that the coronavirus pandemic was planned years ago. According to Ungiadze, in 2015, Anthony Fauci gifted USD 3.7 million to the Wuhan lab, which “was tasked with creating the coronavirus”. 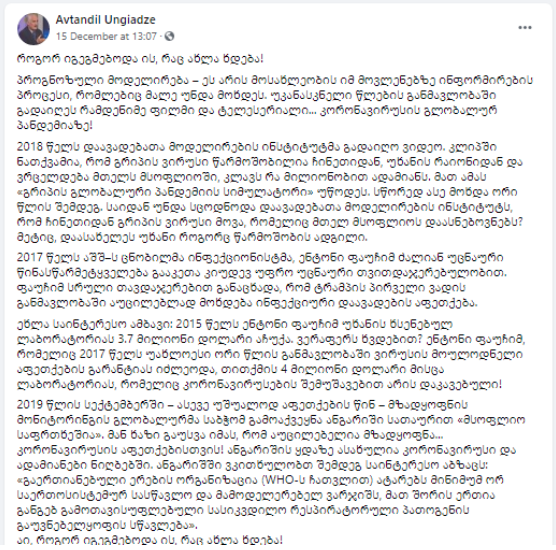 The disseminated posts are disinformative: 1) None of the listed companies own the Wuhan Institute of Virology – it is managed by the Chinese Academy of Sciences. 2) Glaxo, BlackRock, and Bill Gates are all partners, but not owners of Pfizer. 3) The claim that Fauci allegedly gave a grant to the Wuhan lab in 2015 is disinformative. EcoHealth Alliance did indeed get a grant to study families of coronaviruses and the Wuhan Institute of Virology was one of the partners, but this fact is manipulated.

Due to common interests, the companies listed in Bakuradze’s post do cooperate in various forms, however none of the companies, listed by her, own Pfizer – the manufacturer of one of the first coronavirus vaccines.

As for the relations between Pfizer and BlackRock, the latter does indeed own 7.7% of Pfizer’s shares, but the claim that it is the main shareholder of the company is false. BlackRock is a leading international foundation in the field of managing financial resources which cooperates with numerous companies and has thousands of investors, including George Soros. However, connecting Soros with Pfizer through the foundation is manipulative. There is no evidence of Soros in any way participating in the management of Pfizer.

The claim that Bill Gates is the main shareholder of Pfizer is also false. In fact, Gates does cooperate with Pfizer, but not through his technological company Microsoft, but through Bill and Melinda Gates Foundation.  The Foundation funded Pfizer on several occasions to ensure the manufacturing and availability of medicaments. After the SARS-CoV-2 outbreak, the Foundation has been actively cooperatingwith Pfizer and other manufacturers of vaccines. Despite the partnership, neither Bill Gates himself, nor his Foundation own any shares of Pfizer.

Daily Mail was first to disseminate the manipulation about the alleged financial ties between Fauci and the Wuhan Institute of Virology in April 2020. Later, the President of the United States, Donald Trump, and a Republican Rep. Matt Gaetz voiced it too. In fact, the CDC allocated the USD 3.4 million grant in the beginning of 2014 to a US-founded international non-commercial organization EcoHealth Alliance to study the possible spread of coronaviruses from bats to humans. EcoHealth, in turn, allocated USD 600,000 to the Wuhan Institute of Virology, which was one of the project participants, for research purposes.

Disinformation about the prophecies of the pandemic

Apart from the “Wuhan lab”, Avtandil Ungiadze reiterates another, earlier disinformation as well.

Ungiadze claims that pandemic-related simulations and predictions of healthcare specialists confirm that the coronavirus pandemic was a planned scenario. He cites Anthony Fauci’s 2017 statement, according to which a global pandemic during Trump’s first term was inevitable. In fact, Fauci did not mention either COVID-19 or any specific dates in his statement – it referred to a general assessment of the existing risks.

To find out more, read an article by Myth Detector:
“Seven Myths about COVID-19 on Obieqtivi and Ilioni TV Channels”

The post comes with a video of an opening ceremony of the 2012 London Summer Olympics, which, according to the author, included a scene depicting the coronavirus pandemic. In fact, the part of the video of the opening ceremony of the Olympic Games was devoted to the National Health Service of the United Kingdom which has been serving the population for free since the World War II.

Read more about it in an article by Myth Detector:
“What Links “Исцели Себя Сам” to 2012 London Olympics and Coronavirus?”

Dissemination of the posts

The post by Avtandil Ungiadze has 68 shares. News Front has published the text in the post with a title “How Was All that Is Happening Now, Planned!”. News Front’s link has 30 shares.