Who Disseminates Disinformation about the 2014 Fire at the Odesa Trade Unions House? 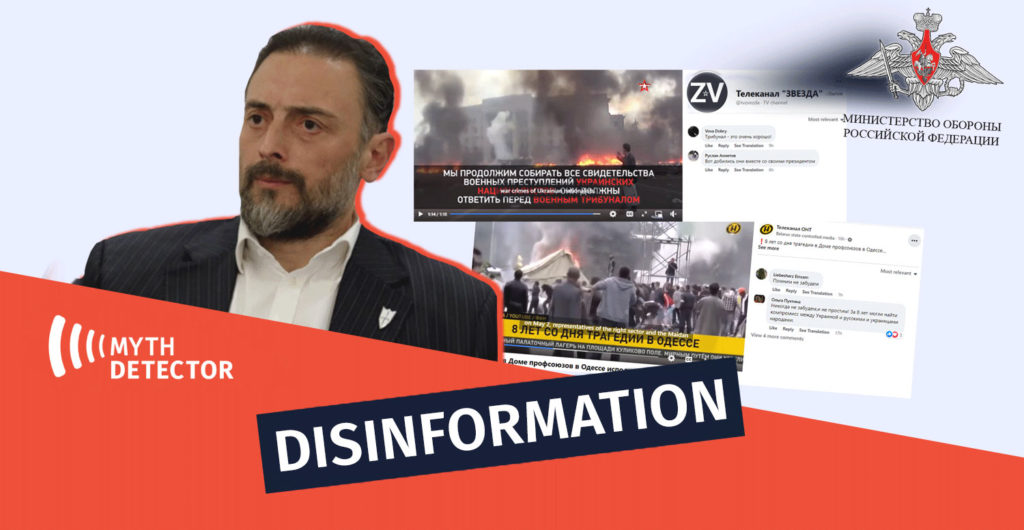 On April 27th, 2022, during his pilot broadcast media “ERI Media,” Levan Vasadze spoke about the tragedy that took place in 2014 in Odesa, Ukraine. Vasadze claimed that the participants of the peaceful protest against the Euromaidan, the Revolution of Dignity in Odessa, around 200 civilians were “thrown” in one of the administrative buildings and “burned alive”. According to Vasadze, killers were waiting inside the building and started a fire to cover the traces of the murders. Vasadze also said that the body of a murdered pregnant woman was set on fire to hide traces of rape and murder and to “imitate a fire burn”.

Levan Vasadze: “…. Let’s take the catastrophic tragedy that happened in Odessa after the Maidan. You remember when in one of the administrative buildings, the participants of the peaceful anti-revolutionary protest, up to 200 civilians, if I’m not wrong, were burned alive inside this building. They were thrown in and burned. I have seen the forensic results carried out inside this building after the fire, and I have seen horrible footprints and facts in this forensic examination; for example, I want to be mild and calm, but there is a clear sign that the killers were inside the building. They waited after these people were thrown inside, killed them and set fire to cover it. I have seen the examination materials, according to which a cleaning woman, a pregnant woman who was raped, strangled, then, as the examination showed, then, in order to imitate a fire burn, was set on fire, so only the upper part of the corpse was burned.

Russian Defense Ministry channel ZVEZDA has also reported on the alleged death of a pregnant woman in a fire in an administrative building in Odessa. According to the disseminated information, the nationalists set fire to the house of the trade unions, where the anti-Maidan activists were present. On May 2nd, the story of the tragedy in the House of Trade Unions was broadcast on the Belarusian channel – ОНТ. According to the journalist, the nationalists killed 48 people. 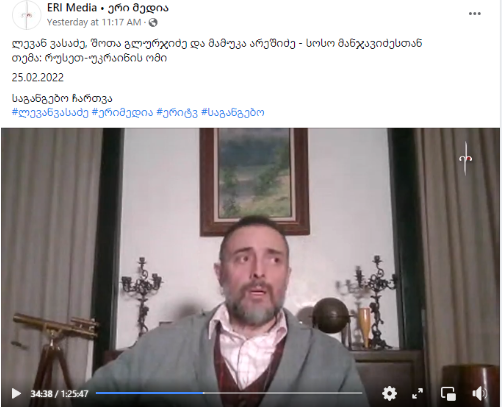 The above-mentioned claims about the fire in the trade union building in Odesa on May 2nd, 2014, are false. In 2014, amid the confrontation between supporters and opponents of Euromaidan, the house of the trade unions was occupied by “anti-Maidan” activists. The building caught fire as a result of a two-way confrontation, with Molotov cocktails being used against each other on both sides. The fire killed 42 people, but no pregnant women were among them. The causes of death of the victims were determined by the expertise: some of them died from injuries sustained by jumping from the windows of the building, and some died from burns and intoxication from the gases released as a result of combustion.

In 2014, as in other Ukrainian cities, rallies supporting the Euromaidan were held in Odesa. Maidan opponents, pro-Ukrainian federalists and pro-Russian groups were also present in the city. In March and April, two rival groups systematically organized protests.

On May 2nd, a football match between Kharkiv “FC Metalist” and “FC Chornomorets” was to be held in Odesa. Fans of both teams showed their support for the unity of Ukraine and Euromaidan. Before the match, a march in support of the unity of Ukraine was planned in the city at 15:00. About 2,000 people gathered in Sobornaya Square to participate in the march, including Metalist and Chornomorets fans, right-wing activists, members of the Odesa Defense (a similar Maidan defence group in Odesa) and other supporters of Ukrainian unity.

At the same time, 300 activists of the pro-federalism radical movement Odesskaya Druzhina gathered about 450 meters from Sobornaya Square. According to the disseminated information, the anti maidan supporters were planning to disrupt the planned march for unity. It is noteworthy that on both sides, members of the pro-Maidan “Right Sector” and the “Odesa Defense” and activists of the “Odesskaya Druzhina” were equipped for a possible confrontation, wearing helmets, masks, shields, metal and wooden sticks, and axes.

Members of the Ukrainian Unity March marched from Sobornaya Square towards the football stadium. At the same time, anti-Maidan supporters marched in the direction of the march and began to provoke the participants. The clashes took place mainly near Grecheska Square. The confrontation soon escalated into a mass riot and lasted for several hours. The two-way shooting also started during the clashes, which resulted in the death of 6 people. 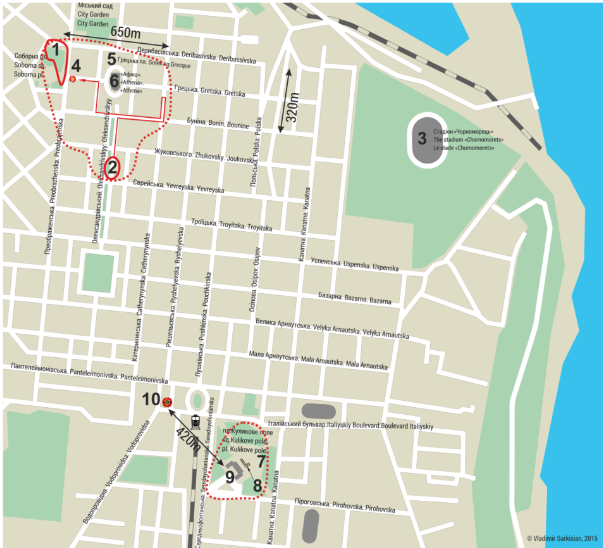 Examination report on the causes of the fire

According to a forensics report conducted by the Mykolaiv Regional Department of the Ministry of Internal Affairs, the fire in the trade union house could have been caused by one or more flammable substances and a source of fire in the building. Examination revealed five fire origins: in the hall, on the right and left stairs connecting the ground floor and the first floor, on the first-floor room and on the stairs connecting the second and third floors. Except for the hall, other fires could have occurred only as a result of the actions of the occupants of the building. The cause of death of people became the rapid spread of fire and the rapid rise in temperature. It was found that Molotov cocktails were used by both opposing parties, including inside the building. The investigation did not reveal that the fire was pre-planned. No cases of toxic substances have been reported.

Examination report on the causes of death of the victims

An additional 34 forensic examinations were conducted to investigate the reasons for the deaths of those killed in the fire. With the exception of cases in which deaths were caused by falls from heights, the medical examination found that the cause of death at the trade union home was carbon monoxide intoxication, burns, and high temperature. No cases of torture, beatings, gunshot wounds or other injuries have been reported. There have also been no reports of toxic gas poisoning other than carbon monoxide. These findings of the examination are also confirmed by the findings of an independent investigative team, the May 2 group.

According to reports from the Office of the UN High Commissioner for Human Rights and the Council of Europe International Advisory Panel, anti-Maidan supporters were attacked by some Euromaidan supporters as they fled the house. However, others helped them to leave the burning building.

Findings of the “May 2 Group”

The May 2 events were thoroughly investigated by an independent investigative team, the May 2 Group. According to the group, the fire broke out in the house of the trade union as a result of the fire ignited in front of the building. In turn, the barricades were set on fire by opposing groups firing Molotov cocktails at each other. The fire spread from the entrance of the building to the hall. Secondary fires also appeared in the building. Secondary fires were the result of the spread of fire from the lower floor.

The May 2 group concluded that as a result of the intricate design of the union building, barricades, obstruction of certain exits, heavy smoke and poor lighting, those inside the building could not find an escape route and were trapped in the building. The May 2 group attributed the deaths to falling from a building, burns and carbon monoxide intoxication. According to the investigative group, the cause of death on May 2 in the union building is directly related to the fire, and no other cause of death has been identified.

According to the May 2 group, the fire broke out at the trade union house at 19:44. In comparison, the fire was set to tents in the Kulikovo Pole square at 19:27. The first call to report the fire was made at 19:31. According to the group, if there had been at least one fire brigade on the ground during the first phase of the fire, it would have been possible to put out the fire and save people, although the fire service arrived on the scene 45 minutes after the first calls. According to the May 2 group, the large number of deaths in the trade union house was caused by the incompetence of the fire service.

The May 2 tragedy and Russian propaganda

The fire at the trade union house was used to discredit the Euromaidan movement in Ukraine. In Odesa, Euromaidan supporters are referred to as nationalists, fascists and neo-Nazis. The house fire of the unions is often compared to the Khatyn massacre. For example, the state media ‘Channel One’ described the events in Odesa as follows:

“The real slaughter organized by the radicals in Odesa is already referred to as the new icon. Nationalists trapped people in a trade union house, the exact spot where protesters usually gathered and threw bottles of flammable substances. Those who tried to escape were shot. Anti-fascist rally activists, including women and the elderly, were trapped in the fire.”

Cruelty on the verge of madness: Neo-Nazis did not let medics in with the wounded. The wounded were kicked. People were forced to jump out of windows while fleeing fire and retribution.”

The village of Khatyn was burned by the Germans during World War II. The tragedy has become a symbol of the destruction of the civilian population. The Russian media’s connection to the tragedy of the Odesa trade union fire serves to reinforce the narrative that Euromaidan supporters were “Nazis”, “Banderovs”, and “militants,” while the anti-Maidan activists were “civilians of Odesa”. Similar rhetoric was revealed by the Ukrainian fact-checking organization StopFake in 2019 in various Russian media articles:

Vladislav Balinsky, one of the researchers of the May 2 group, also spoke about the myth of “Odesa-Khatyn” and the active use of propaganda by Russian televisions:

Balinsky: “Amid the open aggression against Ukraine, the myth of the “Odesa-Khatyn” was used by Kremlin propaganda to intimidate people and gather volunteers in Russia. This propaganda has worked and is working against Ukraine.”

At various times, StopFake has verified various false claims about the events of May 2nd. For example, in 2014, it was reported that the “Nationalists” did not allow the doctor to help the injured. The information was spread on the social network based on the post of the Odessa doctor, Igor Razovsky. In fact, such a doctor does not exist in Odesa, and the Facebook account was fake. In 2015, a documentary about the events of May 2 by Arkady Mamontov was aired on ‘Russia One.’ The information presented in the film was verified by Stopfake. The organization concluded that the film is manipulative, spreads false information and is characterized by propaganda rhetoric that serves to incite hatred.