Who “Created” Tornado and Was the Wuhan Lab Destroyed? 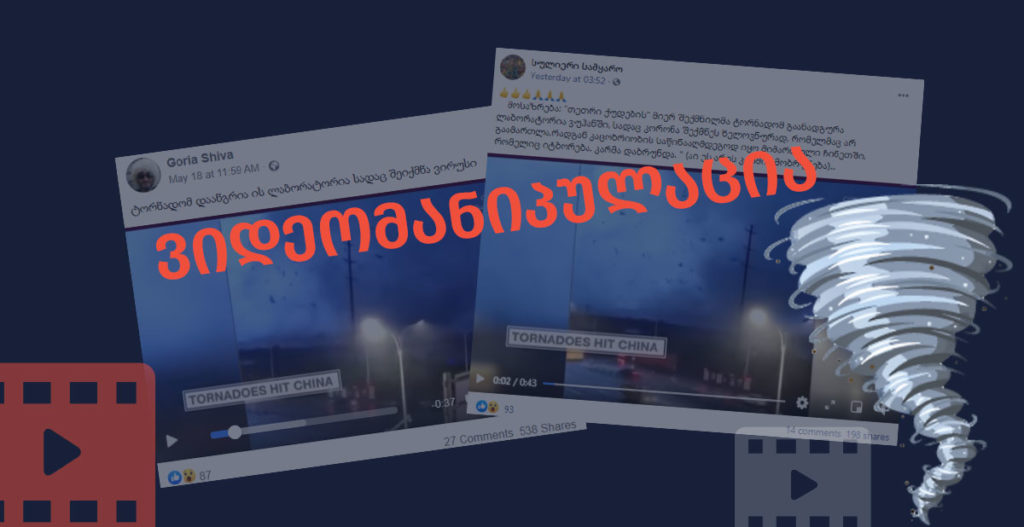 On May 18, Facebook user Goria Shiva published a post, according to which a tornado created by “the White Hats” destroyed the lab in Wuhan, where the coronavirus had been created. Another Facebook user “სულიერი სამყარო” (Spiritual World) spread identical information on May 20.  Both posts are accompanied by a video, claiming that the tornado hit two Chinese cities, Wuhan and Shengze, leaving tens of people dead and hundreds injured. 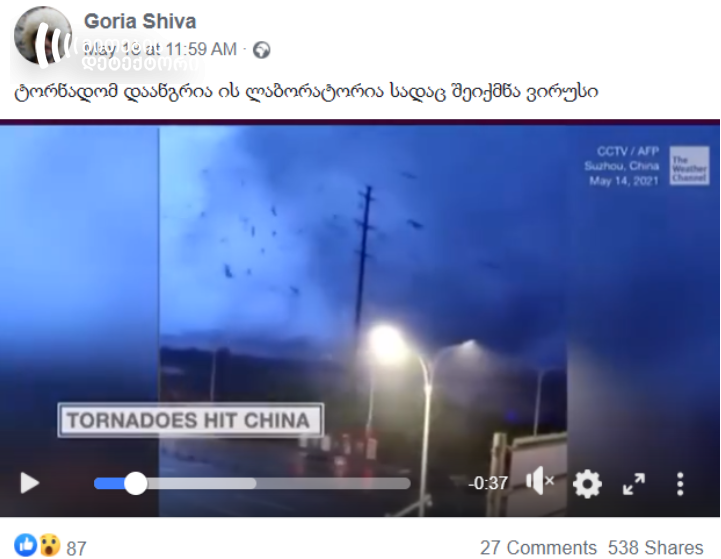 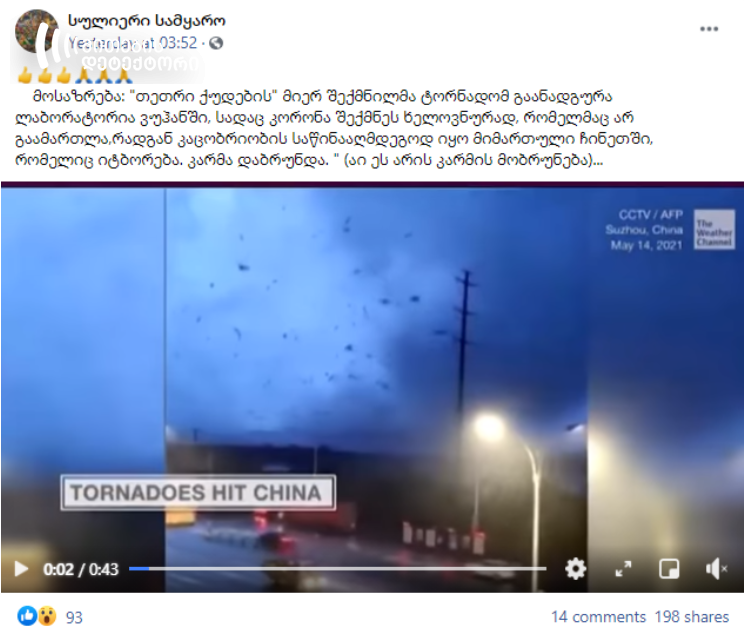 The description of the post spread on Facebook does not coincide with the content of the video. Neither the video referred to as the source, nor other news programs have reported about the destruction of the Wuhan lab. Thus, the claims of Goria Shiva and “Spiritual World” have no factual grounds. “Spiritual World’s” opinion that the tornado had been created by “the White Hats” contains elements of a conspiracy theory. The claim voiced in the posts about the coronavirus allegedly being created in a lab has not be confirmed so far.

What is the video about?
The video allegedly showing the destruction of the Wuhan lab was posted on The Weather Channel on May 17. Launched in 1982, the channel broadcasts weather forecasts and weather-related news and analysis. A 40-second story notes that a least a dozen people were killed and hundreds injured in back-to-back tornadoes that ripped apart homes and buildings in two Chinese cities, Wuhan and Shengze. According to the same video, more than 250 hundred buildings, including homes and businesses were damaged or destroyed by the two tornadoes. However, the list of destroyed buildings does not contain the Wuhan lab. The story stresses in the end that the tornadoes were produced by supercell thunderstorms that occasionally happen this time of year in China.

Other sources
Deutsche Welle reported that at least 12 people were killed and more than 400 injured as a tornado hit central and eastern China around 8:40 p.m. local time (1240 UTC/GMT) on May 14. According to the same source, eight people died and 280 were injured in Wuhan, the capital of China’s central Hubei province.

Another tornado struck the eastern town of Shengze, some 400 kilometers to the east in Jiangsu province. Officials said four people were killed. One person was missing and 149 injured. The strong winds damaged electricity facilities and several factory buildings, local officials said.

Tornadoes are not rare in China and they mainly occur during the late spring and early summer months.

Neither have other media outlets reported about the destruction of the Wuhan lab. According to The Guardian, 27 homes collapsed in Wuhan, and another 130 were damaged. Identical information was spread by The Washington Post, which said citing Chinese media that besides the collapse of tens of homes in Wuhan, construction site sheds were also damaged and power lines downed.

The Western and Chinese media outlets do not report anything about the Wuhan lab. Thus, the information spread on social media is not true and lacks evidence.

About “the White Hats”

How do tornadoes form?
A tornado is mainly formed in the warm sector of a cyclone when a warm air mass and a cold air mass collide as a result of strong lateral winds. The rotating air mass rapidly moves towards the earth and rotates counterclockwise at a speed of 450 km / h.

Despite widely circulating conspiracy theories about artificial creation of the coronavirus in a lab, the vast majority of scientists who have studied the virus agree that it evolved naturally and crossed into humans from an animal species, most likely a bat. The genetic material and evolutionary history of the virus, and understanding the ecology of the bats in question made it possible to prove it.

Speaking at a conference organized by PolitiFact, Anthony Fauci, director of the U.S. National Institute of Allergy and Infectious Diseases, noted that he was not convinced the virus originated naturally, adding that the investigation should be continued until they found out exactly what happened in China.

Anthony Fauci: “Certainly, the people who investigated it say it likely was the emergence from an animal reservoir that then infected individuals, but it could have been something else, and we need to find that out. So, you know, that’s the reason why I said I am perfectly in favor of any investigation that looks into the origin of the virus.”