Who considers US Ambassador’s statement about Russia’s interference in the elections comical and what does past experience show? 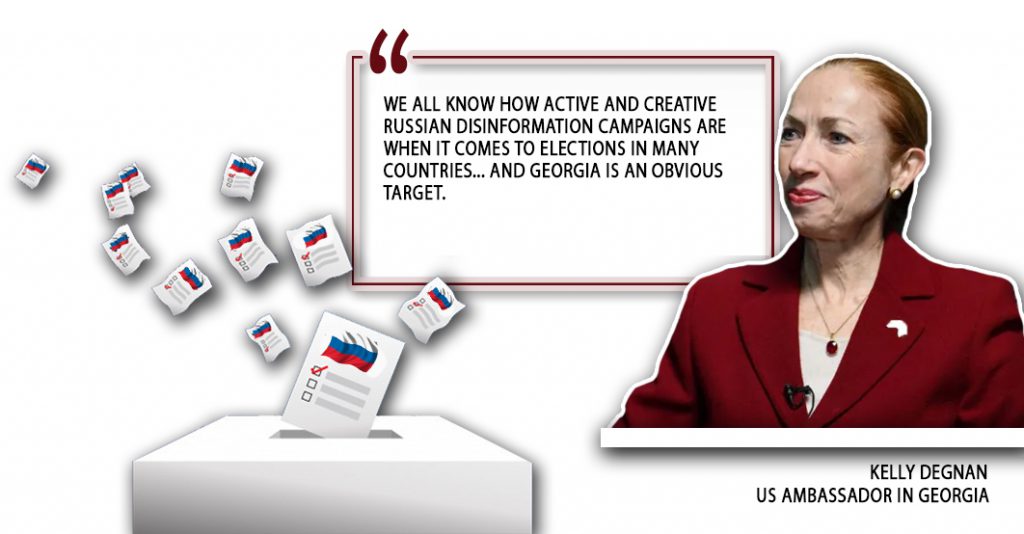 On July 1, US Ambassador in Georgia Kelly Degnan stated during the international online conference organized by the Georgian Institute of Politics that Georgia is a target of Kremlin disinformation and Russia may try to interfere in Georgia’s parliamentary elections. According to Degnan, the fact that Georgia is moving towards a proportional system increases the probability of Russia’s interference in the elections.

The statement was followed by a negative response from pro-Russian actors and media: on July 8, Levan Chachua, the leader of the “Georgian Idea” party, noted in an interview with online edition “Georgia and World” that Degnan’s statement was a continuation of the Western colonial policy and that in fact she did not want conservative force in Georgia, which would oppose the “liberal dictatorship”. In a July 6 article, “Saqinform’s” editors called Degnan’s statement about the influence on Georgian elections ludicrous. TV Obiektivi host Nino Ratishvili responded to the noted topic and stated in the “Night Studio” program on July 2, that it is not the ambassador’s job to talk about Russia’s interference in the elections and that political parties are holding back to accuse Russia of influencing the parliamentary elections in case of undesirable results.

“Myth Detector” provides an overview of when and how Russia has tried to interfere in the elections held in the USA and Europe.

The facts of Russian interference in the elections of another country have become frequent in the last few years. In this regard, one of the high-profile cases was 2016 US presidential election. US Intelligence services established that Russia aimed to influence US elections by inciting distrust towards American democracy, harming Hillary Clinton’s election campaign and increasing Donald Trump’s chances of winning. This was confirmed based on the materials, obtained by Robert Mueller a special advisor to the US Department of Justice. Later, in January 2017, a declassified report issued by the Intelligence services was published. It describes in detail Russian actions taken to influence US elections. During the 2016 elections, Russian groups carried out the following actions: broke into and surveyed state voter databases, GRU officers hacked into the emails of staff working for Hillary Clinton’s presidential campaign, as well as computer network of the Democratic Congressional Campaign Committee and the Democratic National Committee. Since Clinton was not Trump’s only opponent, Russia’s interference also affected senator Marco Rubio, a cyber-attack, though less successful, was also carried out against the senator’s presidential campaign and the Republican National Committee.

Russia’s actions included a social media campaign backed by the “Internet Research Agency”, known as Saint Petersburg “troll factory”. As a part of propaganda campaign, fake accounts directed at American voters were created. Apart from criticizing Hillary Clinton, the trolls spread posts on controversial topics on gun control, the Black Lives Matter movement, immigration and other. By raising similar issues, they contributed to the division of the society. Moreover, Russian trolls went beyond social networks and staged rallies in New York, North Carolina, Florida, and Pennsylvania. Mueller’s report reads that Russian actors positioned themselves as American activists and mostly organized rallies in support of Trump, although there were demonstrations against his presidential candidacy. For example, in June 2016, Russians created a group called the “United Muslims of America”, through which they announced a rally in Washington. The slogan of the rally was “Support Hillary. Save American Muslims”. They hired US citizen to hold a sign portraying Clinton with a quote: “I think Sharia Law will be a powerful new direction of freedom”.

London School of Economics (LSE) and the Institute for Strategic Dialogue (ISD) published report on international influence campaigns in Swedish elections. The report states that countries such as Russia, try to support anti-immigration and nationalist parties and influence public opinion. The far-right and Russian state-funded media tried to damage Sweden’s international reputation in both pre-election and post-election periods.

Russian state-funded media outlets such as Russia Today and Sputnik, support far-right groups in Sweden. The authors of the report examined the activities by Kremlin’s media and social networks during the pre-election period, which tried to portray Sweden as a “failed country”. In the period from July 16 to September 8, 2018, Russia Today and Sputnik published 520 stories about Sweden, which was especially active during the last two weeks before the election.

Monitoring of Russia Today (English, Russian, French and German websites) has shown that political parties, such as Pirate Party, far-right SD and AfS were widely covered during the period of study. They were presented neutrally or positively. In contrast, the Swedish police, the government and the EU were mostly portrayed negatively or neutrally. These media outlets were focused mainly on criticism of Swedish immigration policy and the link between the increased crime rate in Sweden and migrants. Other topics included Sweden’s failed integration policy, the country’s Muslim community, as a potential threat to both national and EU security, Julian Assange, „North Stream 2“, Naftogas-Gazprom dispute, and so on.

The Committee was also informed that the Conservative Party received funding from immigrants living in Great Britain, who made large donations. It is a known case, when the wife of former Russian Deputy Finance Minister Lyubov Chernukhina paid 160,000 British Pound Sterling to play tennis with Boris Johnson and David Cameron. The match was a form of donation for the Conservative Party. According to Neweasterneurope, Chernukhina is the biggest female donor in the history of British politics. Members of Labour Party (UK) claimed that “the report could contain evidence of links between Johnson’s Conservative Party and Russian billionaires”.

As Neweasterneurope.eu note, it is a well-known Kremlin tactic attempting to influence and shape public opinion online. According to Twitter, 3,613 Russian accounts were created in 2016, which became especially active on the day of Brexit referendum, June 23. Noted accounts of Russian origin are linked to the organization, which is famous as the „Internet Research Agency“.  The US Intelligence report on the so-called Saint Petersburg “troll factory” states that it was probably funded by Putin’s close ally.

According to the Center for Strategic and International Studies, the 2017 French presidential election is a clear example of an unsuccessful attempt by an external actor to influence the election. Russia’s campaign directed at Emmanuel Macron “has failed both to interfere in the elections and to antagonize French society”. Two days prior to the second round, a large amount of information from Emmanuel Macron’s presidential campaign was hacked and made available online. Real as well as fake emails were used in the leak of information.

Failure of interference was partly due to revelation and suspension of 70 000 fake accounts in France by Facebook ten days before the elections, since digital platforms represent an important mean for the spread of disinformation. In addition, media outlets RT and Sputnik failed to gain accreditation from Macron’s team to cover the remaining part of its campaign after April 27, 2017.

Russia spread disinformation during Germany’s 2017 federal elections. Russian narratives included criticism of German government over the issue of migrants. Russia influenced German elections through the Kremlin’s German-language media outlets (Sputnik and RT) that spread an information on anti-immigration issues in favor of the far-right AfD party. It is also noteworthy that bots became more active in social networks during the election period. Social networks such as „Odnoklassniki“, „Vkontakte“, Twitter, Facebook, YouTube, were among the instruments used to influence public opinion.

According to the report prepared by London School of Economics (LSE) and the Institute for Strategic Dialogue (ISD), the Kremlin-funded media outlets such as Russia Today (RT) and Sputnik were oriented on far-right and far-left readers with anti-NATO and anti-Western sentiments as well as on Russian Germans. Noted media outlets portrayed the AfD as a mainstream party and have not mentioned that it was supported only by the minority of population. Russian-language media that represents an important source of information for Germans with Russian origin, had been constantly criticizing Germany, the government and the EU.

Although there is no direct evidence that the AfD has been financially supported by Kremlin, many politicians from the party have close ties with Russia and their views often coincide with the Russian nationalistic views. Moreover, the AfD party has supported Russia’s actions in Crimea from the beginning.