Who Casts Doubt on Authenticity of Anne Frank’s Diary? 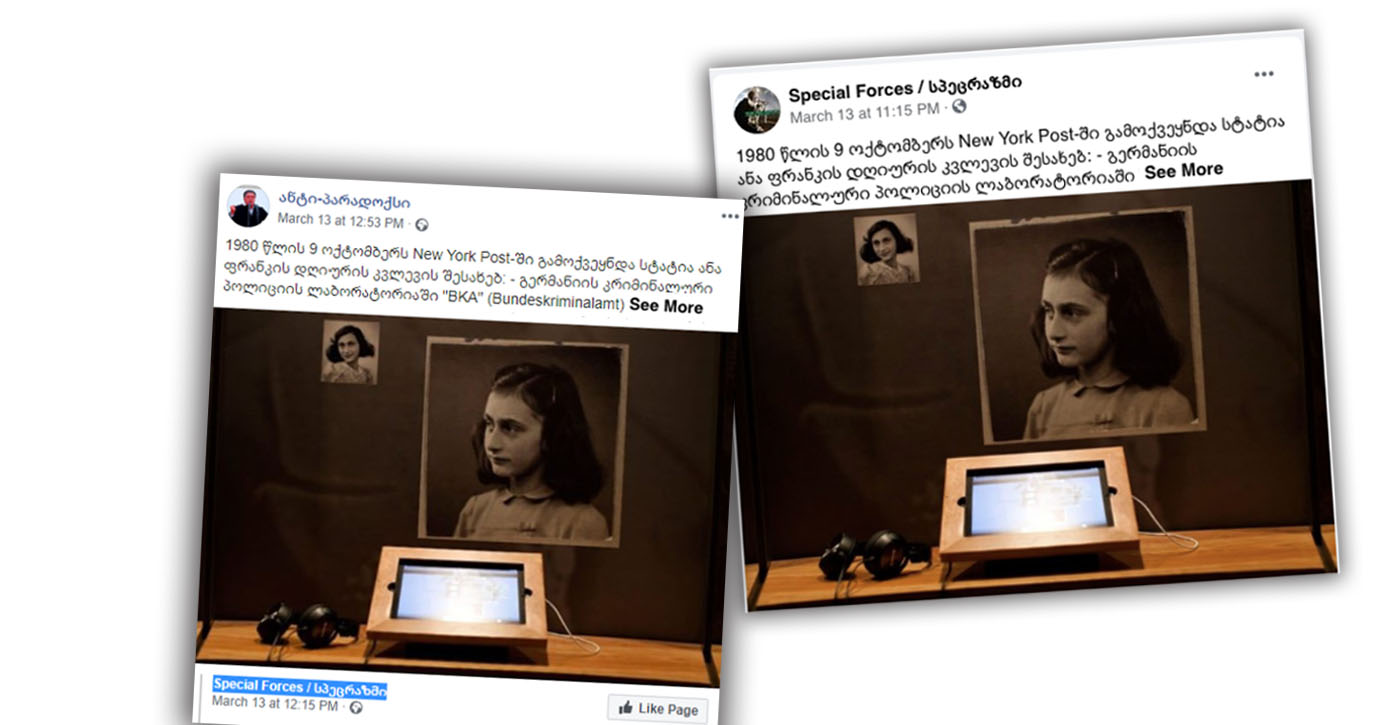 On March 13, Facebook page “Special Forces / სპეცრაზმი” published a post about the Diary of Anne Frank. According to the page, volume 4 of the diary had been written by a ballpoint pen, implicating that this part of the diary may be fabricated since ballpoint pens first emerged in 1951, while the diary was written in 1942-1944. The Facebook page “Special Forces / სპეცრაზმი” notes that the research on Anne Frank’s diary involving the information about the ballpoint pen was conducted at the Federal Criminal Police Lab (BKA) and in 1980, New York Post published it.

The post by “Special Forces / სპეცრაზმი” about the research on Anne Frank’s diary was also shared by Facebook page “ანტი-პარადოქსი” (Anti-Paradox). 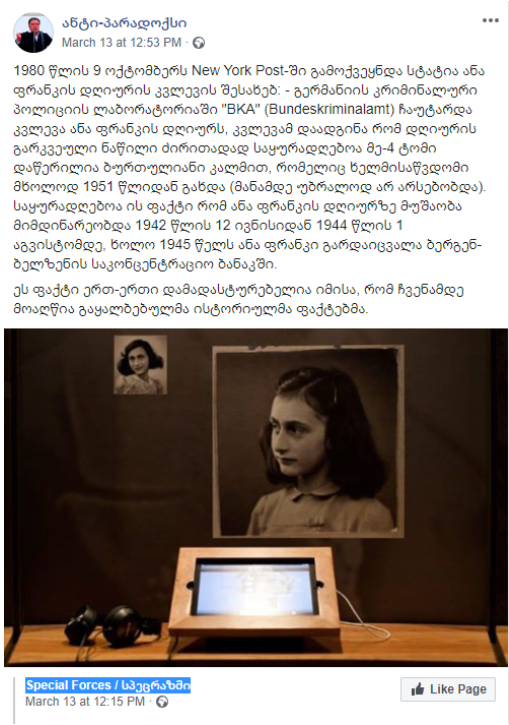 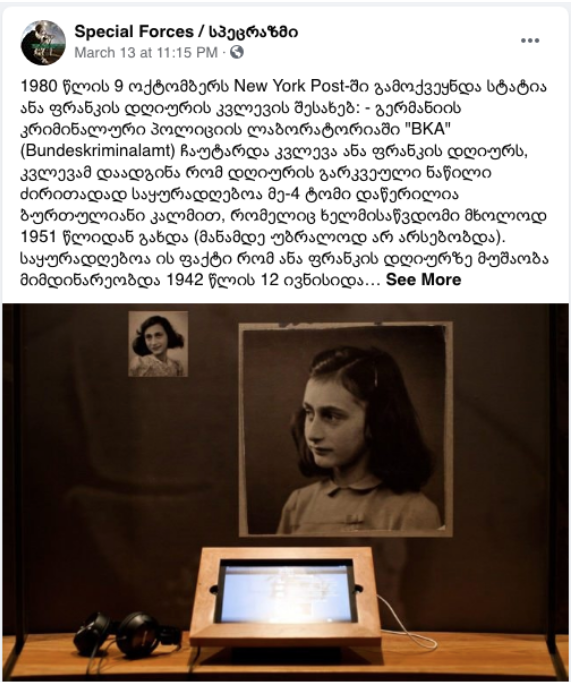 The claims as if volume 4 of Anne Frank’s diary had been written by the ballpoint pen and accordingly, it had been fabricated are not true. The authenticity of all parts of the diary has been proved, whereas the trace of ballpoint pens and identical fake news are part of Neo-Nazi propaganda.

The Diary of Anne Frank was written by a Jewish girl while in hiding for two years during the Nazi occupation of the Netherlands in 1942-1944. Anne Frank died in 1945 and her diary was published in 1947 upon permission from her father, Otto Frank. There are three versions of Anne Frank’s diaries: original, raw reflections, the second version rewritten by Anne Frank and the third version prepared by Otto Frank for publishing.

Shortly after Anne Frank’s diary was published, an anti-Semitic campaign was unleashed against it, which even cast doubt on the existence of Anne Frank. The Neo-Nazi forces had been trying for years to prove that Anne Frank’s diary was fabricated; however, in 1986, the Dutch government proved its authenticity following thorough research and forensic examination. The glue and fibers used in the binding of the diaries were analyzed by infrared spectrometry. Both were found in common use when Frank wrote her diary. The paper used in the diary was examined by X-ray fluorescence and found to have been manufactured between 1939 and 1942. Frank’s handwriting was closely analyzed by experts, as were specimens of her writing and those by her classmates. In 1990, the court in Hamburg ruled that Anne Frank’s diary was authentic.

The conspiracy theory about the ballpoint myth originated as far back as the 1980s, when the Neo- Nazi groups claimed that ballpoint corrections were made to the diary using black, blue and green inks, which did not exist until 1951. The origin of the “ballpoint myth” is the four-page report that the Federal Criminal Police Office (the Bundeskriminalamt or BKA) published in 1980. In this investigation into the types of paper and ink used in the diary of Anne Frank it is stated that “ballpoint corrections” had been made on some loose sheets. It was not the BKA’s task to cast doubt on the authenticity of Anne Frank’s diary, but rather to report on all the texts found among the diaries, and therefore also on the annotations that were made in Anne’s manuscripts after the war. The “ballpoint myth” is based on the simple fact that, around 1960, two annotation sheets with ballpoint writing were inserted between the original pages. These texts were written by a graphological researcher, and are not included in any edition of the diary. In July 2006, the BKA found it necessary to state in a press release that the 1980 investigation in no way challenged the authenticity of the diary and the myth was largely driven by misinterpretations picked up by Neo-Nazi groups.

The page “Special Forces / სპეცრაზმი” was created on November 28, 2015. It is administered from Georgia and presently has 13 000 followers. The page mainly shares military content and news; it is focused on the Middle East conflict. The page is known for its antiliberal and xenophobic sentiments. 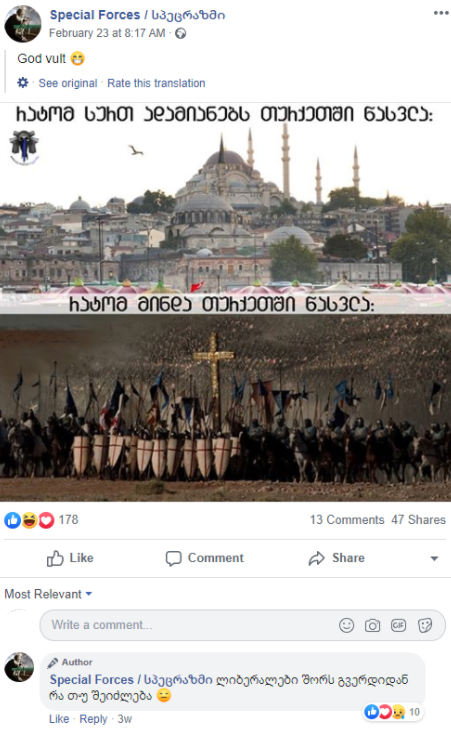 The page “ანტი-პარადოქსი” (Anti-Paradox) was created on May 18, 2018. It is administered from Georgia and presently it has about 30,000 followers. Anti-Paradox had several Facebook pages; the current page was named “Anti-Paradox 2”, but after Facebook blocked the old page, it was renamed to Anti-Paradox. The page is known for its homophobic, xenophobic and antiliberal content; it frequently shares disinformation as well as photo and video manipulations. See the materials published by the Myth Detector about the myths spread by Anti-Paradox at the following link: https://bit.ly/3blJtPY