Which Vaccine Involves a Two-Month Restriction on Drinking Alcohol? 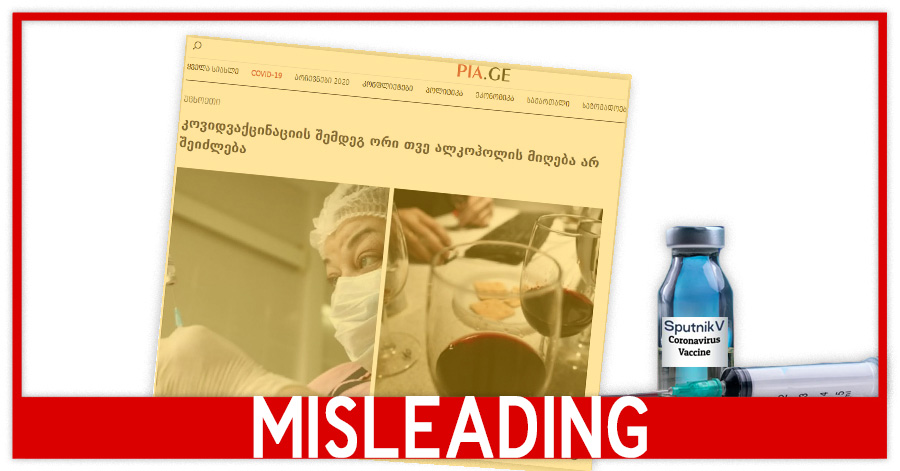 On December 9, an online edition pia.ge published a news article titled “No Alcohol for Two Months After the COVID vaccine”. The article concerns the anti-coronavirus vaccine and claims that, according to experts, alcohol should not be consumed within 42 days after the vaccination. The edition cites an article by BBC Russian and notes that Clinical Excellence Group commented on this issue with BBC. The background of the article mentions that the Pfizer/BioNTech vaccine got officially registered in the United Kingdom on December 2. 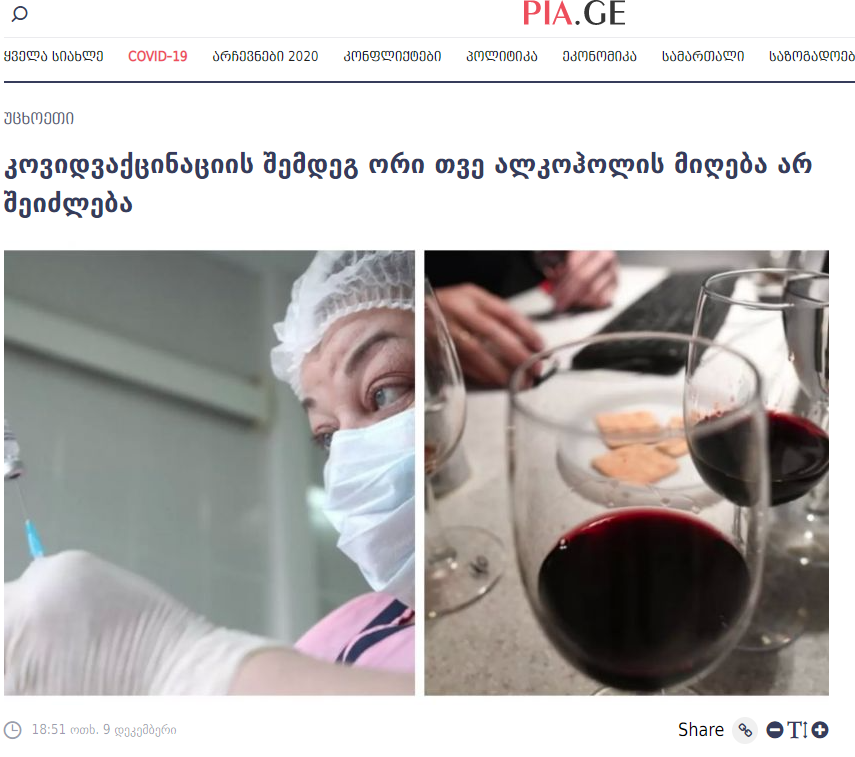 The information about the restriction on taking alcohol after the COVID-19 vaccination, disseminated by PIA, is misleading and creates a perception that this restriction concerns the Pfizer/BioNTech vaccine. In fact, the statement on such restriction was only made in Russia concerning the Sputnik V vaccine, whereas the BBC Russian article, cited by pia.ge, does not mention the consumption of alcohol at all.

Pia.ge cites a BBC Russian article titled “В Москве мало желающих, в регионах нет вакцины. Как началась вакцинация от Covid-19” (Many people waiting for the vaccine in Moscow, there is no vaccine in the regions. How the Covid-19 vaccination began). The article concerns the process of vaccination in Russia, brings individual examples and discusses problems due to which the process is not very efficient, including the influence of suspicions among the population and conspiracy theories. The primary source – the BBC Russian article – mentions neither the comment of the Clinical Excellence Group regarding the alcohol, mentioned by pia.ge, nor any advice, restriction, or recommendation on consuming alcohol. Moreover, the article does not mention that the Clinical Excellence Group is an organization, operating in Russia and the countries of the Eurasian Economic Union. Besides, mentioning the Pfizer/BioNTech vaccines in the article creates a perception that the 42-day restriction on consuming alcohol is related to them.

The Pfizer/BioNTech vaccine got approved first in the United Kingdom and then in Canada; since December 8, the United Kingdom has been vaccinating its citizens. No statement has been made as to whether the consumption of alcohol should be restricted after the vaccination. A spokesman for Pfizer, whose COVID vaccine began being rolled out by the NHS on Tuesday, said health regulators had not included any warnings about alcohol consumption relating to the jab.

In reality, the statement on restricting the consumption of alcohol for 42 days after the vaccination was made in relation to the Russian Sputnik V vaccine.

On December 4, the Deputy Prime Minister of Russia for Social Policy, Tatiana Golikova stated that in order for the vaccine to work efficiently, social contacts should be reduced, masks worn, sanitizers used, crowded places and alcohol avoided.

Later, on December 8, the Head of the Federal Service for Surveillance on Consumer Rights Protection and Human Wellbeing (Rospotrebnadzor), Anna Popova, received the question about the recommendations and the 42-day period of restrictions. Popova added another advice to Golikova’s recommendations and noted that the alcohol should also be avoided for two weeks prior to the vaccination. She also added that taking alcohol would hinder the process of immune response creation.

After Anna Popova, the Head of the Gamaleya Research Institute of Epidemiology and Microbiology, where Sputnik V was created, also made a statement about the topic. According to Alexander Gintsburg, a full restriction on alcohol is not needed or planned. He strictly recommended, however, to avoid alcohol for three days after each vaccination.