Which Russian Sources Are Cited by Obieqtivi TV to Accuse U.S. of Creating Coronavirus Artificially? 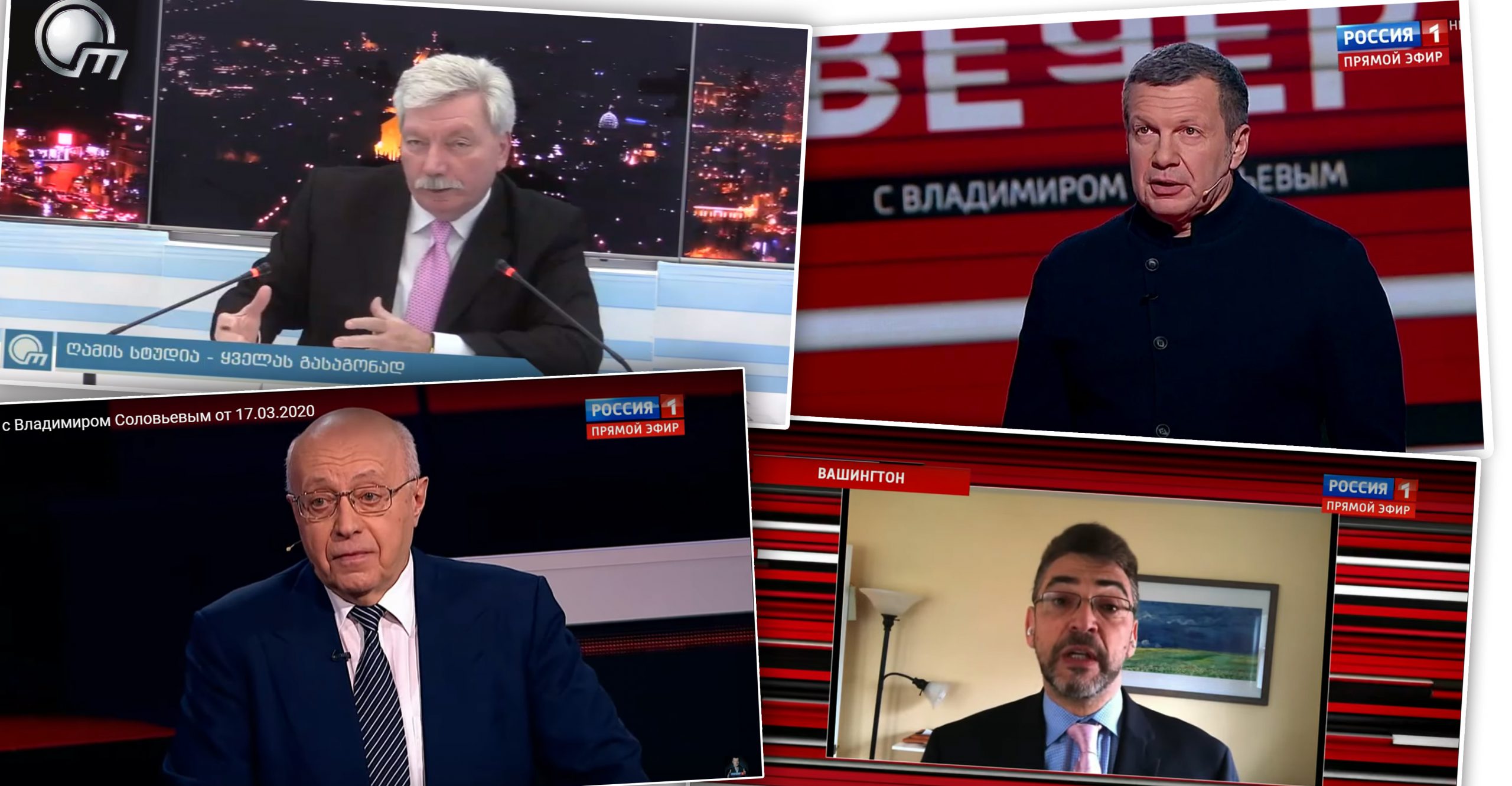 On March 24, 2020, Valeri Kvaratskhelia, host of Obieqtivi TV program “Gamis Studia – Kvelas Gasagonad” (Night Studio – To Everybody’s Attention), focused his attention on the coronavirus outbreak. He noted that the novel coronavirus has been created artificially and that its molecule involves a trace of “engineering interference.” He cited the extracts from Vladimir Solovyov’s program aired at Россия 1 on March 17 and March 23, where Russian politician Sergey Kurginyan and Crimea-born and U.S.-based political analyst Ariel Cohen are talking about the origins of coronavirus.

In the March 17 episode of the program, Sergey Kurginyan promotes an opinion that the coronavirus had been created by the Americans and the United States had been long preparing for a pandemic that, as Kurginyan claims, can be confirmed by rapid production of coronavirus vaccine in the United States. The March 23 episode of the same program offers Ariel Cohen’s livestream from Washington, who said while talking about the current situation in the United States amid the spread of coronavirus that the American intelligence services knew about possible virus outbreak in China already in August-September 2020. Cohen linked the fact to “certain military games” that, as he noted, were held in China with the participation of American militaries.

Citing the above mentioned sources, Valeri Kvaratskhelia echoes the same narrative, linking the emergence of virus to the United States.

Valeri Kvaratskhelia, Obieqtivi TV: “So, what’s the matter, show us what we are dealing with, a structure of the virus called coronavirus. This structure shows a trace of engineering… Trump was informed about the anticipated epidemic in China already in autumn. How could they know about it? The Americans could know about it as something was being planned, apparently, with their participation.”

Sergey Kurginyan, movement Суть времени: “Let’s ask the first question, why do not they show us the virus? Its structure… Show people its structure, it will be very interesting. It has a strange genome, engineered, strange cuts, mechanical… Now the second question, the Americans have officially started to test a vaccine; how did they manage to do it so quickly? It is impossible unless you start working on the virus from the very beginning.”

Ariel Cohen, the International Tax and Investment Center: “There were “military games” in August and September, according to which a virus would emerge from China. It concerned not coronavirus, but an epidemic, a dangerous influenza which would leave about one million people dead in the United States.”

Referring to Russian media sources, the Obieqtivi TV host promotes a conspiracy theory that the Americans created the coronavirus artificially and spread it in China. In fact, after studying the virus genome, the scientific research confirmed that the virus has a natural origin, whereas the reports about the U.S. government allegedly being informed about the coronavirus in advance are not confirmed by any official sources.

1. It has been confirmed that the novel coronavirus has originated through natural processes.

Valeri Kvaratskhelia, like Sergey Kurginyan, does not name any scientific research or source to support the opinion that coronavirus came from a lab.

The Chinese scientists were the first to collect and publish the genomic data of the virus. Eventually, on March 17, 2020, Nature Medicine, a peer-reviewed medical journal, published the results of the comparative analysis of genomic data, according to which the coronavirus has originated through natural processes and its genetic data do not show that COVID-19 is a laboratory construct or a purposefully manipulated virus.

Natural Medicine: “It is improbable that SARS-CoV-2 emerged through laboratory manipulation of a related SARS-CoV-like coronavirus. The genetic data irrefutably show that SARS-CoV-2 is not derived from any previously used virus backbone.”

2. Not a single official source confirms reports about the U.S. government allegedly being informed about coronavirus in advance

Not a single reliable source has confirmed the doubts voiced by Obieqtivi TV, according to which the U.S. intelligence services had information about the spread of virus from China before the Chinese government officially confirmed the first cases of coronavirus. Kvaratskhelia refers to the March 17 and March 22 episodes of Solovyov’s program, where Sergey Kurginyan argues that the first human trial of a vaccine to protect against pandemic coronavirus has started in the U.S. Based on the above mentioned, he promotes a conspiracy theory that the United States had been preparing for this situation for years.

Political analyst Ariel Cohen also does not name any official source to support the opinion that the United States has created the coronavirus. Cohen only mentions “military games” held with the participation of American militaries. The Military World Games, a multi-sport event, was really held in the Chinese city of Wuhan in October 2019 with the participation of an American military sports team. A conspiracy theory that the U.S. military brought the virus to Wuhan is frequently linked just to this sport event.

On March 18, Georgia and World as well as News Front also spread a conspiracy theory that the United States created the coronavirus. See detailed information in the story published by the Myth Detector: