Which Countries Are Actually Shown in the Photo Ascribed by “აზიმუტი” to Sweden? 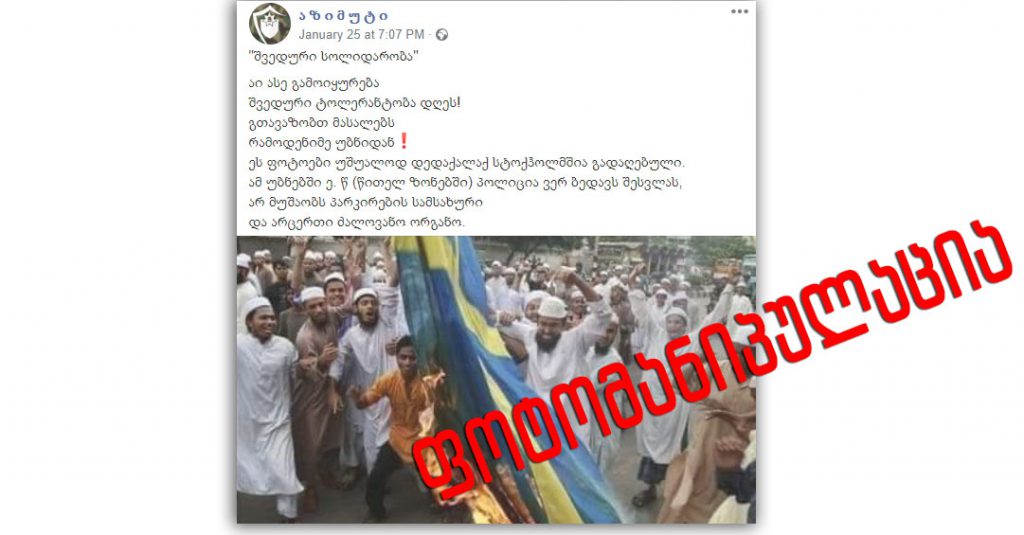 On January 25, 2020, a Facebook page “აზიმუტი (Azimuth)” published a post regarding the demonstrations in Sweden. The post was accompanied by various photos, depicting protesters burning the Swedish flag as well as other violent actions. The page noted that Swedish solidarity and tolerance has led the country to such violent circumstances.

„აზიმუტი“: “Swedish solidarity” – this is how Swedish tolerance looks like today! We offer you materials from several districts! These photos have been taken in the capital, Stockholm. Police fail to enter these districts (so called red zones); neither parking service nor law enforcement agencies work there.”

The post published by “აზიმუტი” triggered a lot of comments involving Islamophobic, xenophobic and Antiliberal narratives. It is worth noting that one of the photos depicting the burning Swedish flag made Azimuth’s post more convincing and created an impression that the incident really took place in Sweden. 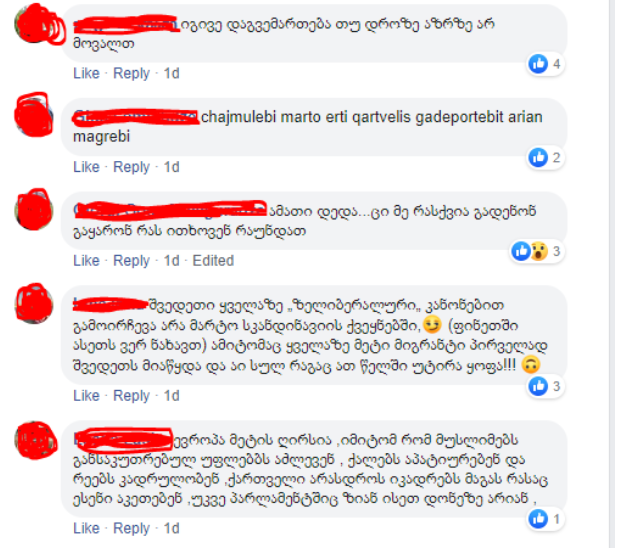 After verifying the photos through Google’s search engine, it appeared that one of the photos depicts the 2013 protests in Pakistan rather than the violence by migrants in Sweden; the second photo shows Bangladeshi Muslims burning the Swedish flag in 2010 to express protest against a Swedish cartoonist for drawing images of Islam’s Prophet Muhammad. 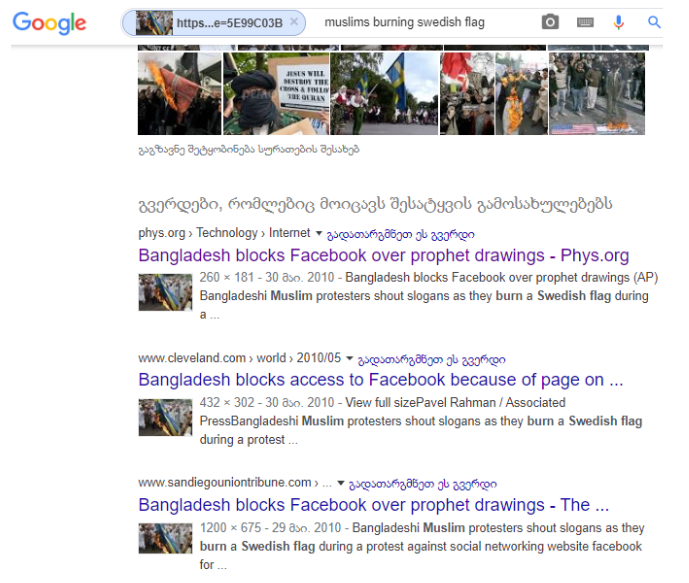 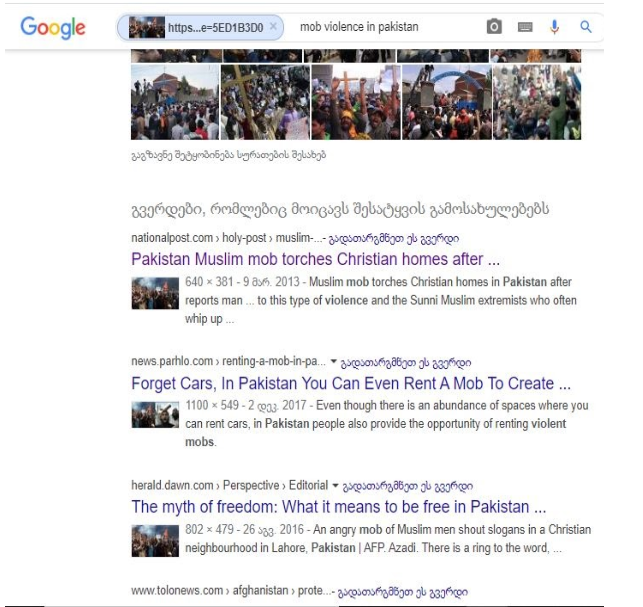 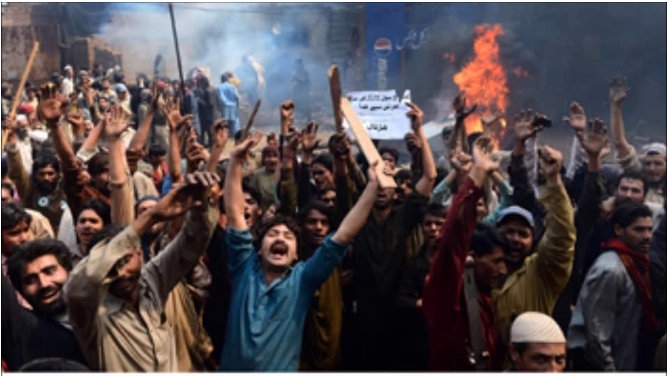 The photo used by „აზიმუტი (Azimuth)“

One of the photos used by Azimuth shows a protest rally held in Pakistan in 2013, rather than the developments in Sweden. Protests sparkled in Lahore after a Christian man committed blasphemy against Islam’s prophet irritating the Muslims. Blasphemy is a serious crime in Pakistan that can carry the death penalty but sometimes outraged residents exact their own retribution for perceived insults of Islam’s Prophet Muhammad. Protesters gathered outside the Christian man’s home, demanding relevant actions from police. The rally turned violent after the mob began ransacking Christian homes and setting them ablaze.

It is worth noting that the rallies on religious grounds frequently take place in Pakistan; however, Azimuth connects this particular photo to migrants’ protests in Sweden that is misleading and does not correspond to the truth 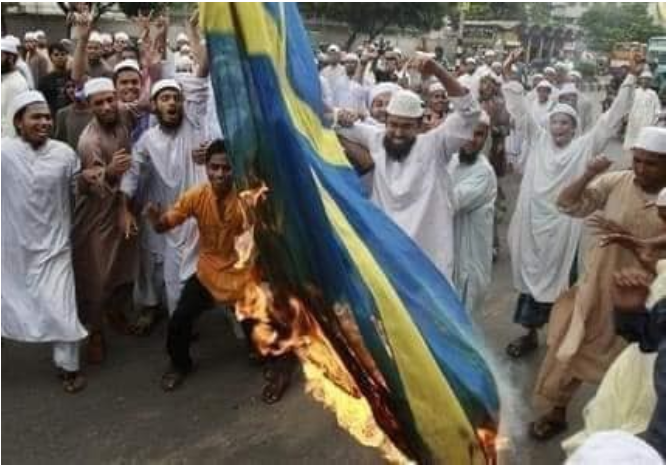 The second photo spread by Azimuth depicts the people in Islamic clothes burning the Swedish flag. But it should be noted that the rally was not held in Sweden; it was held in Bangladesh in 2010 as part of the rallies held in other Muslim countries.

Protests began after a Facebook page called “Everybody Draw Mohammed Day” that encouraged users to draw images of the prophet. Swedish artist Lars Vilks was among the contestants, who drew an insulting cartoon for Islam and Muslins, triggering demonstrations in other Islamic states as well. Some countries even blocked Facebook (Bangladesh, Pakistan).

The photo with the burning Swedish flag spread by Azimuth does not depict Stockholm or any other city. It should be noted that the protesters in the photo are burning the Swedish flag because Lars Vilks is just Swedish by origin.

Similar rally was also held in Indonesia in 2010, where the protesters burned the Swedish flag as a sign of protest against cartoonist Lars Vilks. 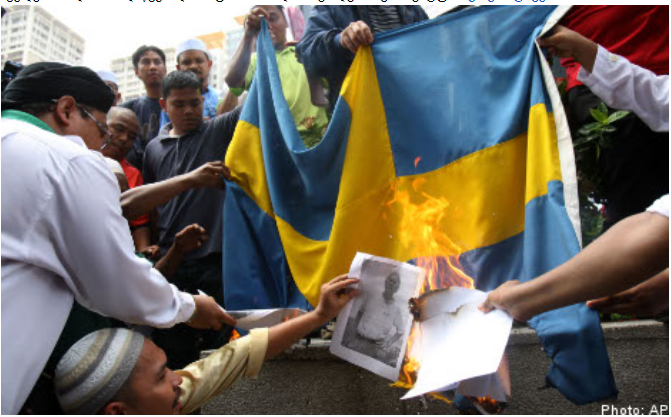 Photo manipulation is one of the widespread propaganda methods aimed to form public opinion and further strengthen the existing stereotypes. Along with video manipulations, photo manipulations have a profound impact on readers/viewers through exerting visual and emotional influence on them.

Facebook page „აზიმუტი (Azimuth)“ was created on December 19, 2017. In its “About us” section, the page notes that it is involved in military-analytical activities and informs the population on security issues. According to Facebook, the page is administered from Georgia, France and Russia and it spreads fake news.