Where the Russian “Iskander” does and does not aim? – From Karabakh to Syria 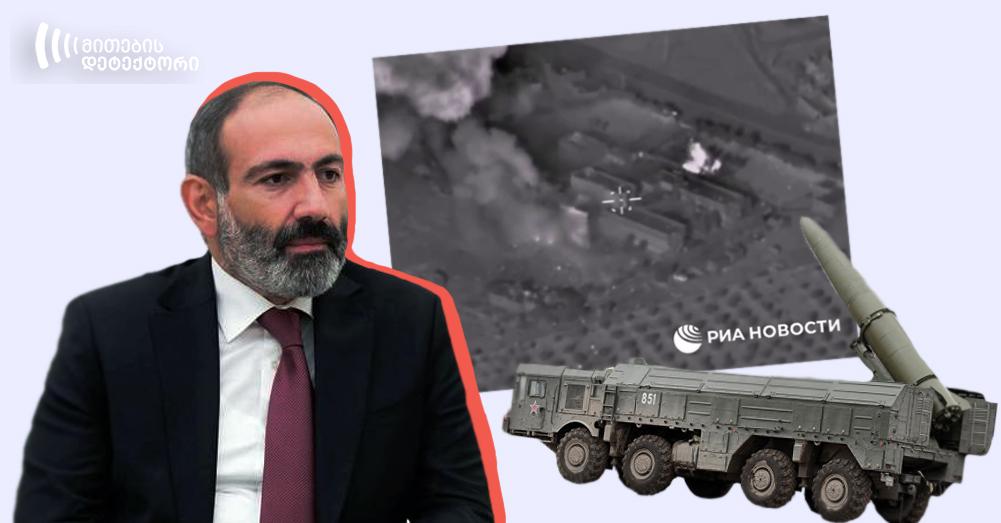 The Kremlin propaganda media outlet, Sputnik Georgia, published a video about the current events in Armenia. It is said that Prime Minister Pashinyan’s statement about the Russian “Iskanders” divided the society into two camps, raising the question of whether the “Iskanders” were used in Nagorno-Karabakh. As a response to this question, a video from Sputnik Georgia describes the reasons for the new wave of protests. However, the Georgian version of Sputnik Georgia’s publication is solely based on footage released by the Russian Ministry of Defense.

The assertion of the Ministry of Defense of Russia that the “Iskander” weapon was not used in Nagorno-Karabakh is unsubstantiated. A video and the statements of Armenian army representatives indicate the opposite. A comparison of satellite images manifests that one of the videos released by the Ministry of Defense of Russia demonstrating the effectiveness of “Iskanders” shows the bombing of a hospital in Syria, which Russia has so far categorically denied.

On February 23, the former Armenian President and Prime Minister Serzh Sargsyan criticized acting Prime Minister Nikol Pashinyan during an interview. Sargsyan said the Russian “Iskander-E” missile system, acquired by Armenia during his term, should have been used earlier in the recent military confrontation in Nagorno-Karabakh. Nikol Pashinyan responded to Sargsyan’s comment and indicated that the “Iskander” system was used, but only 10% of the missiles exploded. He referred to his possible mistake in the same interview and said that it might have been an ineffective 80’s weapon. Pashinyan’s statement was criticized by Tiran Khachatryan, Deputy Chief of General Staff of the Armenian Armed Forces, after which Pashinyan fired him. Khachatryan’s dismissal was followed by the request for Pashinyan’s resignation by General Staff, which Pashinyan rates as an attempted military coup. He rallied supporters in the streets of Yerevan and demanded the dismissal of Chief of General Staff Onik Gasparyan, but President Armen Sargsyan refused to satisfy his requests.

The Russian Ministry of Defense also responded to Pashinyan’s statement about the “Iskanders.” They released a video claiming that “Iskanders” had not been used in Nagorno-Karabakh and that the weapons were still in storage. Pashinyan’s spokeswoman Mane Gevorgyan issued a statement following the denial by the Russian Ministry of Defense. She said that Pashinyan had been misled about the “Iskanders,” and later, he discussed this issue with Vladimir Putin.

“The Armenian Prime Minister’s statement regarding Armenia’s use of “Iskander” systems were discussed among other issues during the phone call between the Armenian Prime Minister and the Russian President several days ago. The Armenian Prime Minister made a comparative analysis of the available facts and data and concluded that he had been misinformed. There is no doubt that Russian weapons are one of the best in the world. Armenia is continuing close cooperation with Russia in the field of the defense industry and high technologies and plans to work on the further deepening of this cooperation,” Gevorgyan said.

Interestingly, Armenia’s use of Iskander-type missiles in Nagorno-Karabakh was also denied by the President of Azerbaijan – Ilham Aliyev. He said the launch of this type of missile was not recorded during the war.

Despite the statements of the authorities of the three countries, materials indicate the use of “Iskander” missiles by Armenia at the last stage of the Nagorno-Karabakh conflict:

The Ministry of Defense of Russia did not only deny the use of Iskander missiles in Nagorno-Karabakh but tried to demonstrate their effectiveness in the second part of the video. A building displayed in their footage, which is hit by two missiles, resembled a national hospital near the city of Azaz in Syria. 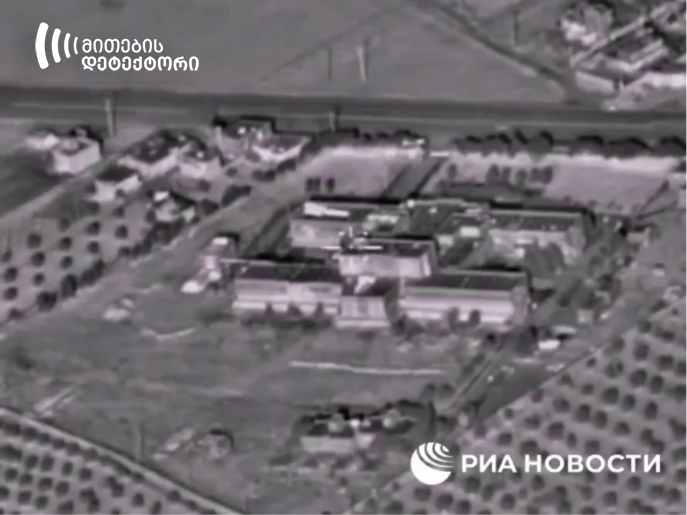 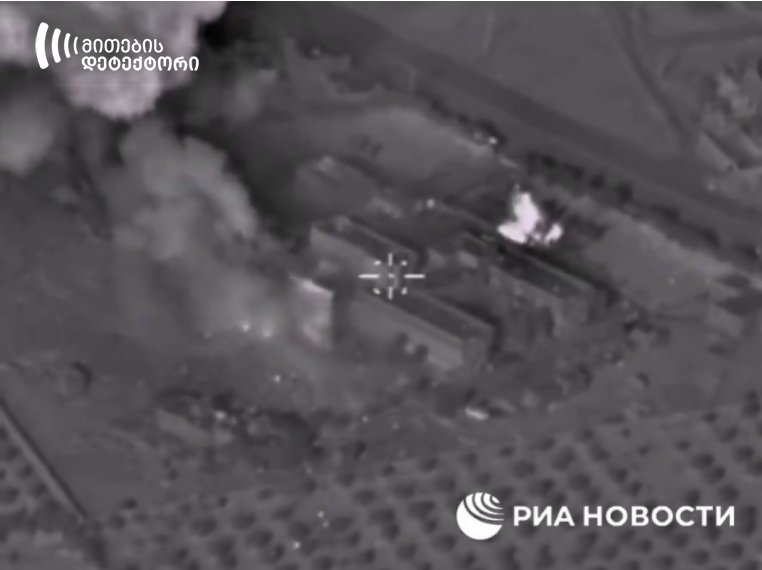 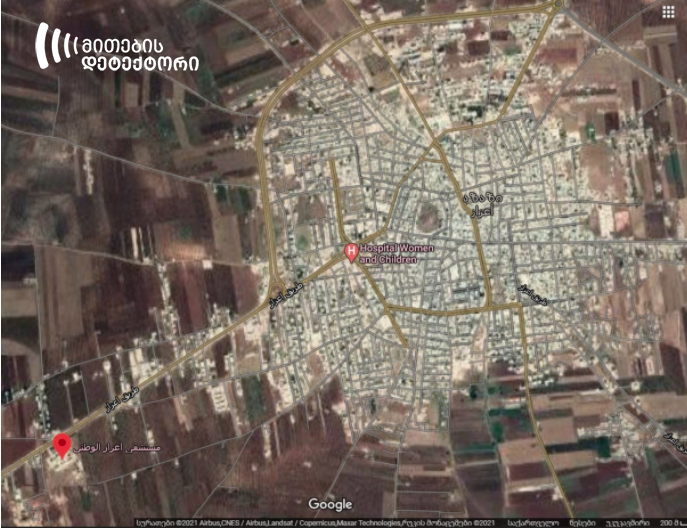 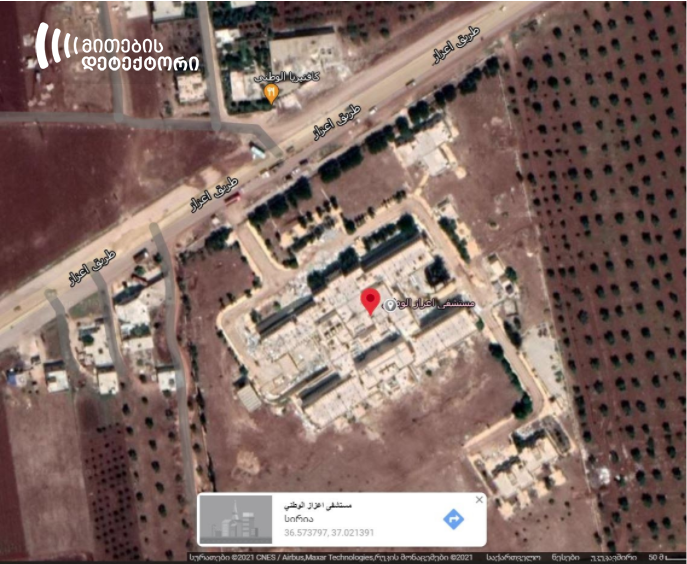 By comparing the satellite photos, it can be seen that the H-shape of the building and the surrounding buildings and its position in relation to the road coincide with Azaz Hospital; its coordinates are – 36 ° 34’25.3 “N 37 ° 01’16.3” E. The hospital was rebuilt with the support of Turkey and is currently operational.

On February 18, 2016, Human Rights Watch released a report detailing the attack on Azaz on February 15, which targeted two hospitals and a school. At least 20 civilians were killed.

One of the two hospitals was a children’s and women’s hospital, near which a Russian 9M79 series Tochka-type ballistic missile crashed. The second was the National Hospital on the outskirts of Azaz, which was located on the front line at the time and was evacuated 10 days before the attack. The exact time when the video released by Russian Ministry of Defense was recorded is unknown, but the fact that they have footage of the attack indicates that the hospital building was deliberately selected as a target.

Russia categorically denied involvement in these attacks on Azaz in 2016.

Russia has previously been accused of targeting civilians in Syria. In 2019, The New York Times investigated actions taken by Russia and Assad regime military campaign, supported by them in Syria since 2017 and obtained records of Russian pilots and ground controllers and flight data, thus concluding that Russia stood behind airstrikes on hospitals and other civilian facilities.

The part where the Russian Ministry of Defense has accidentally released footage of bombing a hospital in Syria to substantiate their argument is omitted in the video spread by Sputnik Georgia.