Where is the Canadian General and Does the Photo of AVIA.PRO Depict his ‘Capture?’ 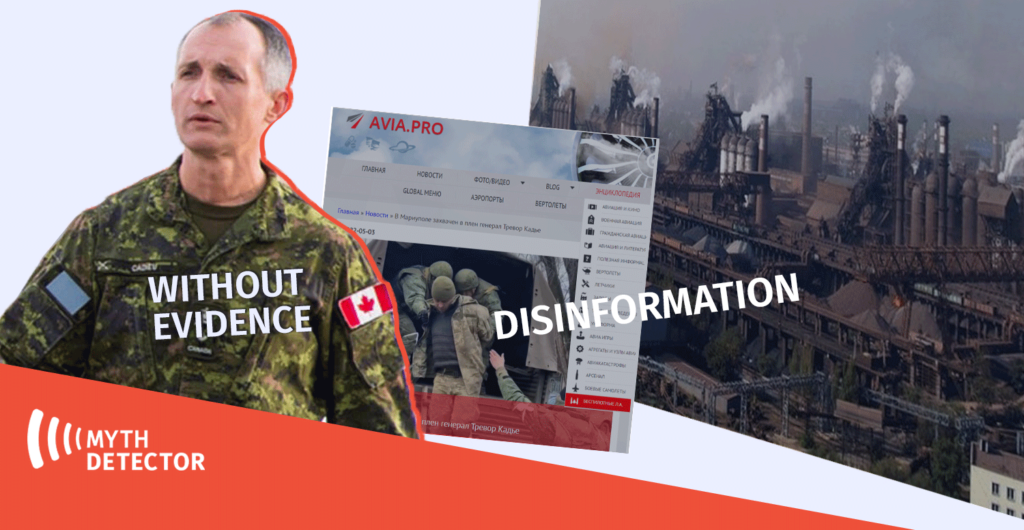 During May 2-4th, both Russian (1, 2, 3) and Georgian (1, 2, 3, 4) social media users have been disseminating the information about the alleged capture of the Canadian General, Trevor Cadieu while fleeing from the Azovstal factory in Mariupol. According to sources, the General headed the bio laboratory in Ukraine, where he worked with 18 people to create deadly viruses.

Notably, several Russian news agencies cite 360tv.ru as the primary source, while 360tv.ru itself writes that information about the General’s capture was disseminated on social media. Several Russian-language media outlets, including avia.pro, write that Cadieu’s capture has not been confirmed by the Russian Ministry of Defense and, therefore, the information is not credible yet. However, the publication attaches an article with a photo of an unknown man, which gives the impression that the photo shows evidence confirming the Canadian general’s capture.

The claims circulating about Trevor Cadieu’s arrest in Mariupol are without evidence, and the allegation that he headed a bio laboratory in Ukraine working on deadly viruses is disinformation. Cadieu resigned on April 5th, and he no longer serves as a general; After his resignation, according to several sources in the Ministry of Defense, Cadieu left for Ukraine, although Mariupol was already under siege during this period and reports of his presence in Azovstal are not confirmed.

Information about the resignation of General Trevor Cadieu of the Canadian Armed Forces has been actively circulated in open sources since April 21st. According to Globalnews.ca, the Department of National Defense has confirmed that Cadieu left the Armed Forces on April 5th after 30 years of service.

According to Defense Department spokesman Daniel Le Bouthillier, the former general decided to leave on his own and did not have any kind of support from the Canadian Armed Forces. Speaking to the media, several anonymous sources in the Ministry of Defense confirmed that Cadieu had left for Ukraine to fight against Russia.

Trevor Cadieu is under investigation for sexual harassment. According to a spokesman for the armed forces, the investigation is ongoing, and the resignation and departure of the high-ranking official have not interfered with the investigation. Notably, members of the Canadian Armed Forces, including part-time reservists, are barred from going to fight in Ukraine, so Cadieu was not in Ukraine during his tenure as General, and has not received any support from the Canadian Armed Forces since leaving.

Meanwhile, the Ukrainian city of Mariupol has been under full siege by Russian forces since March 2nd. On April 1st, the mayor of Mariupol said no one could enter the city and that leaving Mariupol was “very dangerous” for anyone. According to Petro Andriushchenko, after March 31st, Russian forces stopped sending even a small amount of humanitarian aid to the city. Consequently, it is unlikely that the Canadian general, who resigned on April 5th, would have arrived directly in Mariupol.

Avia.pro’s article on Cadieu’s capture includes a photo that gives the impression that it is a shot of the former Canadian general, but in fact, the photo was taken from a video released by vesti.ru on February 24th, in which Ukrainian soldiers were reportedly detained in the self-proclaimed republic of Donetsk. 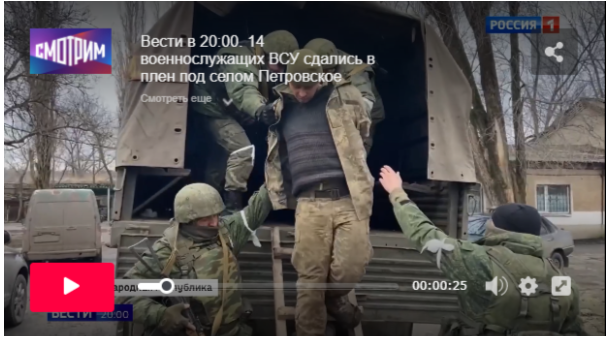 As for the claims that Cadieu has been running a secret bio laboratory in Ukraine, there is no source supporting it. Not to mention, there is no biological laboratory in Azovstal. This disinformation has already been fact-checked by the “Myth Detector.”  Cadieu served in Bosnia in 1997, in Afghanistan in 2002 and 2006-2007, and in the Middle East in 2016-2017.

Since the emergence of the Russia-Ukraine war, the Kremlin’s propaganda has been actively spreading disinformation about the existence of secret bio laboratories in Ukraine. For more on the topic, see our articles:

On May 2nd, it was reported that about 100 people had been evacuated from Azovstal under the auspices of the United Nations. Later, Ukrainian President Volodymyr Zelenskyy said 156 people had been evacuated from Mariupol to Zaporozhe. The evacuation does not concern militants but civilians, primarily women and children. The information about Cadieu’s capture during the escape from Azovstal is not confirmed by open, credible sources, while the Russian-language media does not name a specific source. It is noteworthy that in order to prove the involvement of NATO and Western countries in the Ukraine-Russia war, the Kremlin media and Russian Facebook users have been disseminating disinformation about the arrest of a foreign, in this case, an American general by the Russian military. Read more in “Myth Detector” materials: