Where does the Conspiracy regarding the “Committee of 300,” and the Disinformation about the Spanish Flu and the Polio Vaccines Come from? 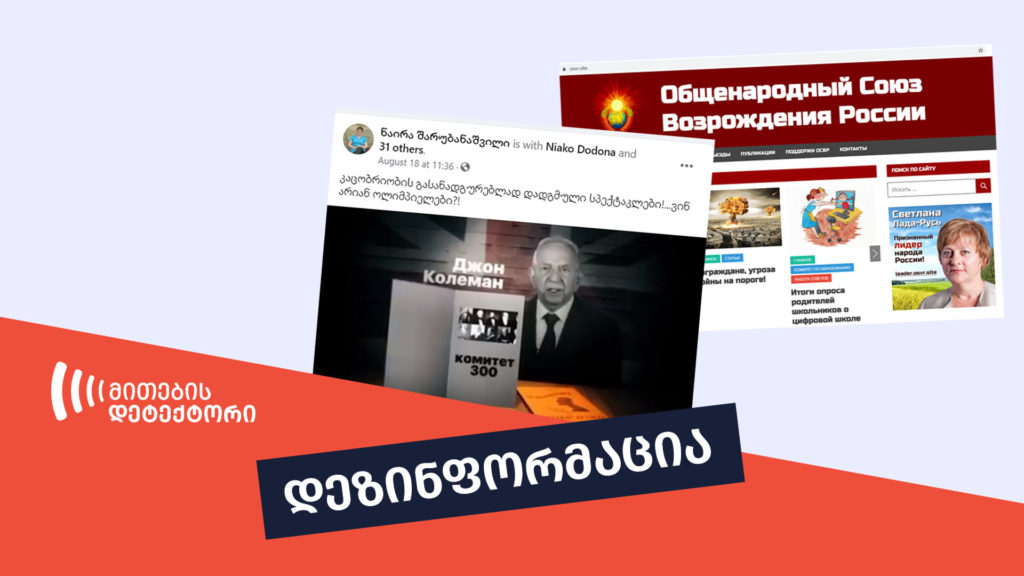 On August 18th, the Facebook user Naira Sharubanashvili shared a video, claiming that the coronavirus pandemic is a spectacle aimed to exterminate the population and take total control over the world. According to the user, the mastermind behind the plan is the secret organisation called the “Committee of 300.” The video prepared by the “People’s Union of the Russian Revival,” (OSVR) claims that apart from Rockefellers, Rothschilds and Baruchs, Bill Gates, and Elon Musk are also members of the committee. They call themselves the “Olympians” and devise global pandemics plans to reduce the world population. The video also mentions the deaths caused by the vaccination during the outbreak of the Spanish flu and the Polio vaccine causing paralysation in 0.5 million children in India. 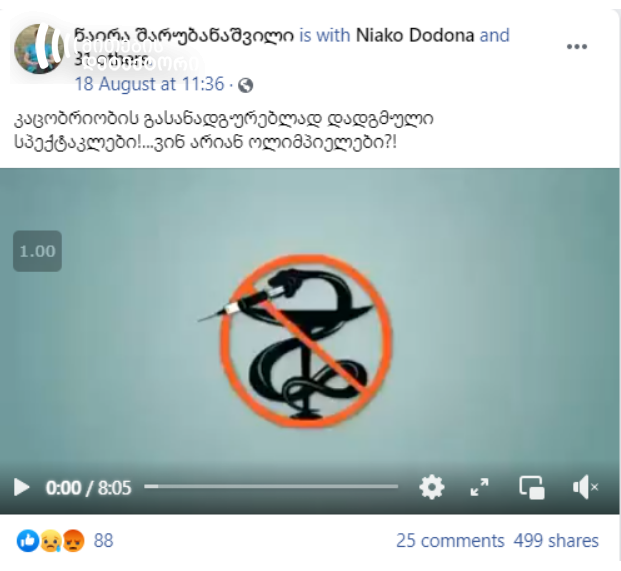 The content of the video disseminated in Georgian and Russian social networks is false and includes several conspiracies and disinformation. First, the claim that the mass vaccination resulted in the death of millions of people during the Spanish flu outbreak is disinformation. The flu emerged in 1918, while the first flu vaccine was created in 1940. The information that the Polio vaccine caused the paralysis of children in India is also false since there are only 17 reported cases of Polio paralysis in Children in India from 2000 to 2017. Finally, the claim that the world is ruled by the secret “Committee of 300” and that Rockefellers have published the pandemic scenario years before the actual outbreak is a conspiracy theory.

Disinformation N1: The very first project aimed at reducing the world population was the Spanish flu, when the mass vaccination resulted in an increased death rate. The first Spanish flu case was reported in 1918, and the pandemic lasted for two years. The first flu vaccine was created in 1940; therefore, 50 million people could not have died because of anti-flu vaccines in 1918-20.

According to the CDC, the Spanish flu pandemic was the hardest one in recent history. The virus has infected around 500 million people, which amounted to one-third of the total world population. The virus resulted in the death of approximately 50 million people.

At the beginning of the 20th century, the bacteria Haemophilus Influenzae was considered the causing factor of the Spanish flu. In October 1918, Spanish doctors assumed that the inflectional agent responsible for the virus was smaller than the bacteria. The virus was officially recognised as the main factor causing the pandemic only in 1930, while the first flu vaccine was created in the US in 1940. By 1918, only chickenpox, rabies, typhoid, cholera and plague could be prevented through vaccination.

According to the Australian medical historian Peter Hubbins, the fundamental problem with vaccines developed in 1918-19 was that they were designed against bacteria, the “wrong” organism, and theoretically lacked protective capabilities.

Disinformation N2: Polio vaccination resulted in the paralysis of half a million children in India.

According to the World Health Organization, the oral polio vaccine (OPV) is a safe and effective tool for immunising children against the disease. However, in sporadic cases, OPV can cause vaccine-associated paralytic poliomyelitis or vaccine-derived poliovirus. Only one of the 2.7 million oral doses of the polio vaccine can cause paralytic polio (VAPP).

The disinformation that polio vaccines caused the paralysis of 496,000 children between 2000 and 2017 has been disseminated in the past. An investigation by the American fact-checking platform, Politfact, found that only 17 cases of vaccine-related paralytic polio were detected in India between 2000 and 2017. Fifteen of them – in 2009 and two – in 2010.

Bill Gates, the founder of Microsoft and the head of the Bill & Melinda Gates Foundation, is actively involved in immunisation projects in high-risk countries. The campaign to eradicate polio in India began in 2000. In March 2014, the World Health Organization announced that the Southeast Asian region was free of polio, bolstered by mass vaccination campaigns supported by the above-mentioned Foundation.

The Conspiracy Theories by the “People’s Union of the Russian Revival.”

Conspiracy N1: The world is ruled by the “Committee of 300,” aiming to control people by transforming them into zombies.

“The People’s Revival Union of Russia” believes that people have been deceivingly put into an e-concentration camp and that each of us may become a biorobot controlled by the world government. According to the People’s Union website, a book by John Coleman, published in 1992, proves this argument right. The author of “Conspirators’ Hierarchy: The Story of the Committee of 300,” claims to be a former British intelligence officer and develops the view that the world has been controlled by a group of aristocratic conspirators since 1897. The plan developed in advance by the Committee is to create a unified world government.

The authors and proponents of the conspiracy theory, who believe that the committee exists, envisage the committee in the form of an international council that governs world politics, banking, trade, media, and the military.

Conspiracy N2: The Coronavirus pandemic scenario was published by the Rockefeller Foundation back in 2010.

The document issued by the Rockefeller Foundation and Global Business Network in 2010 addresses future hypothetical scenarios and technology developments. One of such scenarios discussed in the paper is the outbreak of influenza in 2012. However, as the introduction to the document underlines, the scenarios presented in it are only assumptions and not predictions.

For more, see the articles of “Myth Detector:”

Where did the video originate from?

The video shared on social media was published by the “People’s Union of the Russian Revival” (OSVR) in December 2020. The organisation’s website indicates that the public association was established based on a civic initiative to connect honest citizens and restore the Soviet Union.

The People’s Union of Russian Revival is connected with the internationally wanted Svetlana Peunova. At various times Svetlana Rada-Rus headed the Center for Traditional Medicine “Road to the Sun”, “Svetlana Peunova Development Academy” and the political party “Volia”. It is noteworthy that in 2016, Peunova’s party was suspended by a court for distributing extremist materials. In 2016, Svetlana Peunova was included in the list of international wanted persons, and then she was accused in absentia of fraud and intentional grievous bodily harm. Peunova considers herself a prophet. In 2011, she announced that the mysterious planet Nibiru was approaching Earth, with a population (reptiloids) visiting Earth once every 3,500 years. 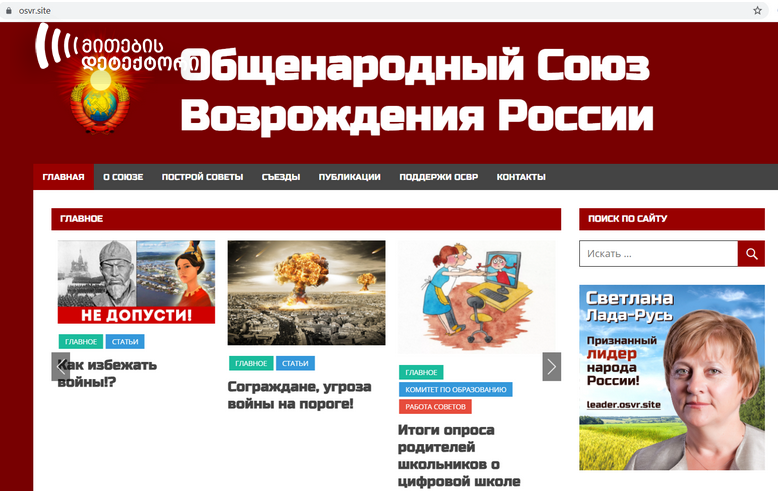 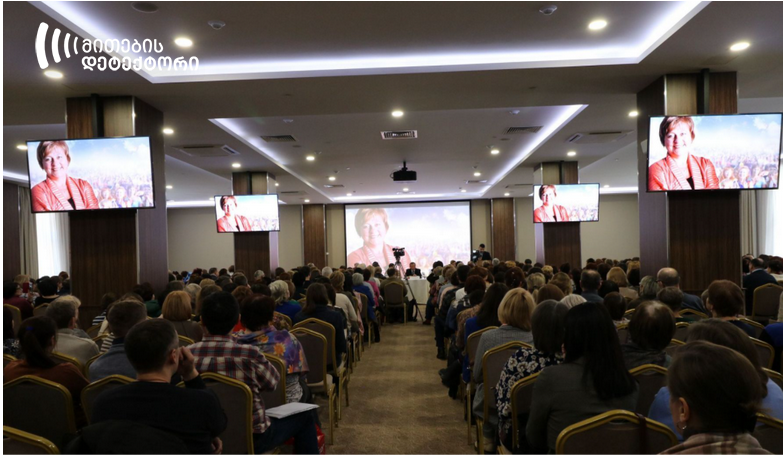