Where does the conspiracy about elders being put to sleep by injection to cut back on pensions in Italy originate from? 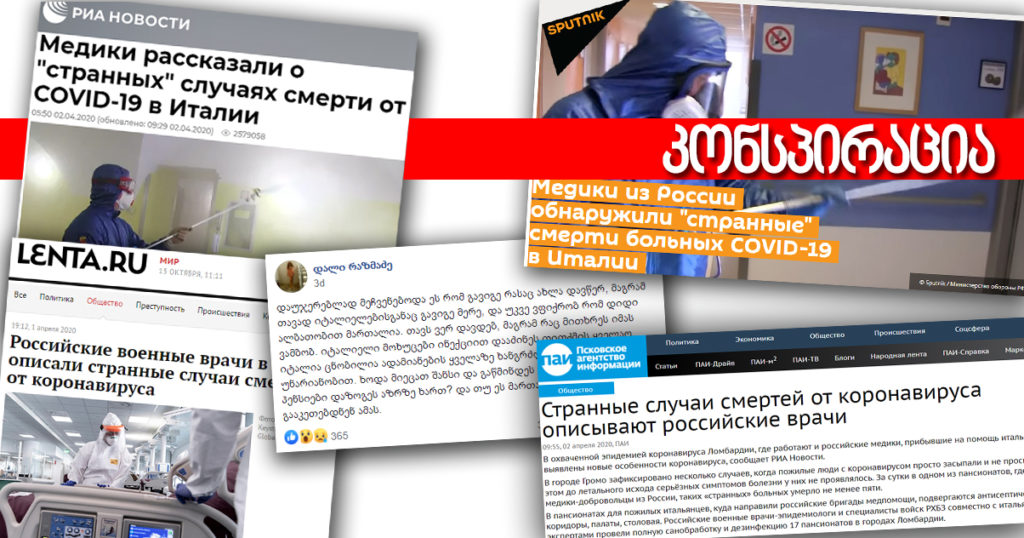 On October 11, Facebook user Dali Razmadze published a post in the group “Let’s defeat Coronavirus/COVID-19 together”, where she formulates an opinion that elders were put to sleep by injection in Italy and that they cut back on pensions by doing so. She cites Italians in general as a source and states that if it actually happened in Italy, the same is expected to occur in other countries as well. 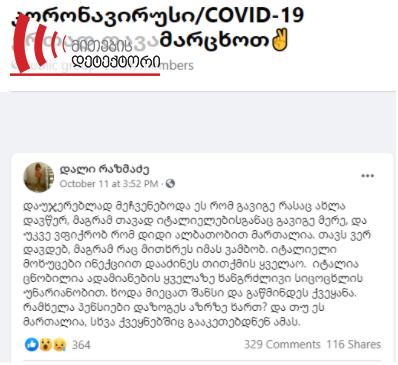 Information disseminated by the Facebook user as if elders were put to sleep by injection in Italy is a conspiracy and isn’t backed with any evidence.

It’s noteworthy that in April, information with similar conspirative content disseminated in pro-Kremlin media outlets. In particular, ria.ru, lenta.ru, informpskov.ru, sputnik-abkhazia.ru wrote about cases of “unusual deaths” in Italy, where “infected individual goes to sleep and doesn’t wake up”. They cite Московский комсомолец as a source, which initially cited information from Russian doctors who were sent to Italy.  Besides the above-mentioned Russian media, no evidence can be found on the aforesaid issue through reliable open-sources.

According to World Health Organization,  even though people of all age groups can be infected, elders and people with various clinical conditions (asthma, diabetes, heart diseases, and so on) are a vulnerable group, whose risk of being critically infected is higher.

As for Italy, according to 2019 data, almost a quarter of the population was over the age of 65. On March 4, the head of Italy’s Civil Protection Agency Angelo Borrelli stated that most people who died of COVID-19 were over 70, and some had pre-existing conditions. It’s worth mentioning that according to the analysis of the first wave of pandemic up to May 31, 2020, most people infected in the first wave of the pandemic were mostly elders or people with a chronic condition. In Italy the median age of people who were infected and died of coronavirus was 82, 95% of them had at least one comorbidity, and 60% had at least 3 comorbidities.

According to the Superior Health Institute’s study, Lombardy experienced a spike in mortality rate in nursing homes after the outbreaks in the region, but the majority of the patients died without undergoing COVID-19 tests. A study on nursing homes revealed 9 154 death cases, 680 of which were infected with COVID-19. Albeit, it’s noteworthy that over 3,000 had “influenza-like” or pneumonia symptoms, which may have been related to coronavirus.

Therefore, elders’ death rate in Italy can be explained by the risk factors associated with the age group making them vulnerable to coronavirus, as well as the number of outbreaks in nursing homes.

“Myth Detector” has previously written about conspiracies related to Italy: