Where does a Conspiracy Theory about “New World Order” Come from? 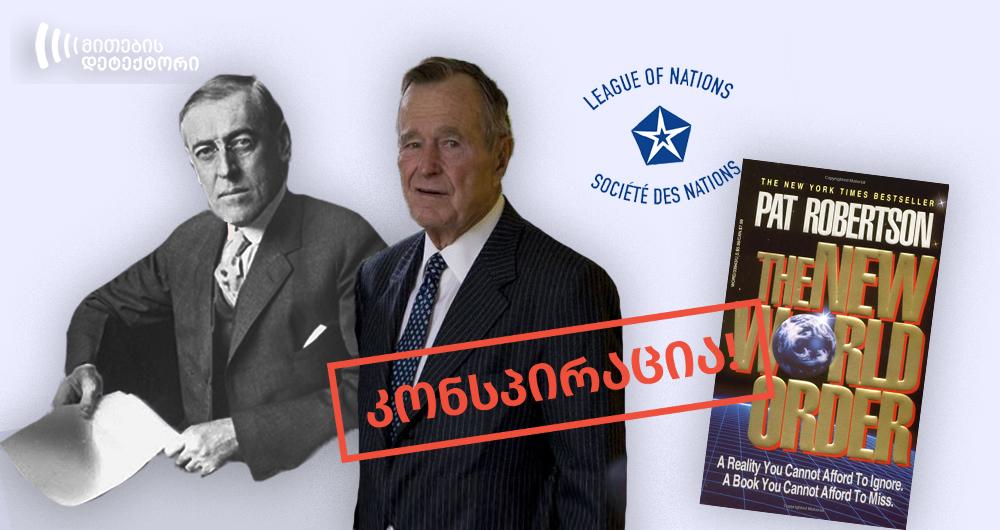 On February 7, Facebook user Ketevan Gejadze published a post, where she focuses on a number of issues, including a conspiracy theory about emergence of the New World Order, linking it to implanting chips in humans, global population decline and control. She also discusses California’s wildfires that allegedly emerged artificially and other issues. 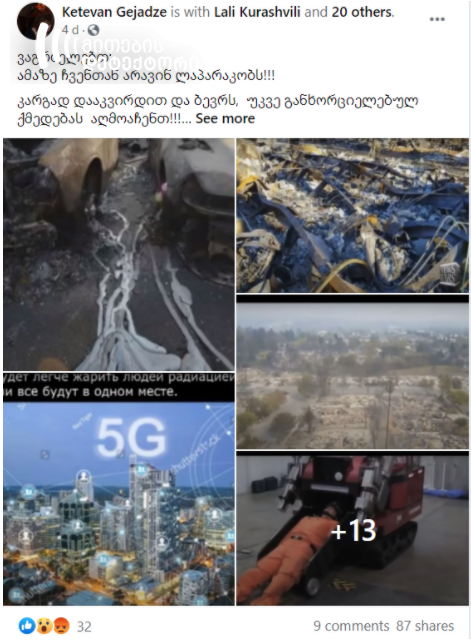 Ketevan Gejadze’s post contains false claims, including a piece of disinformation, three conspiracy theories and one fake quote. Ultimately, the author links these and other claims to the centuries-old conspiracy theory about the New World Order.

Fact: It is not only China where “ghost cities” exist and the reasons for their emergence vary across countries.

The cities that are abandoned by the population are referred to as “ghost cities.” The author links China’s “ghost cities” to a conspiracy theory about UN’s alleged plan for 2021-2030. However, there are a lot of such cities worldwide and the reasons for their emergence vary across countries. For example, the city of Wittenoom in Australia and Ruby in Arizona were abandoned amid growing health concerns associated with mining activities. The city of Ashgabat in Turkmenistan is largely a ghost town, because due to the country’s isolated culture and poverty, people have never lived in marble buildings erected there.

As for China’s “ghost cities,” it was first reported in 2009 that modern cities with state-of-the-art architecture were being built in China in an accelerated manner, but they failed to attract people. Tens of cities called “ghost cities” were built by the government as part of its urbanization plan. The existence of such cities is the result of government-controlled urbanization and excess interference. “Local governments around the country tried to juice and stimulate their economies by building more infrastructure and stimulating the property market,” Dinny McMahon, author of China’s Great Wall of Debt, noted.

Conspiracy theory No.1: California’s fires were caused by targeted lasers to force people out of their homes

Fact: There is no evidence that this is the case, or that “direct energy” weapons have ever been used to start a wildfire.

The claim as if California’s fires were caused by targeted lasers is part of a conspiracy theory that first emerged on the Internet in 2017. Conspiracy theorists claimed that the burn patterns seen in some photos could only be explained by targeted lasers, which must have been operated by terrorist groups, the U.S. government, aliens or some other agitated party. According to some reports, California’s wildfires were planned efforts by clandestine groups, such as the Illuminati or the New World Order.

According to BBC, conspiracy theorists use manipulated or out-of-context images to back their arguments. Reuters also verified the information about California wildfires in 2020, saying that most of the photos widely circulating on the Internet were taken at different times and in different places. No Cal Fire investigation has shown any indication that drug cartels, Illuminati or aliens played any role in sparking or spreading deadly blazes in California.

Conspiracy theory No.2:  5G Radiation will burn people and gain control over their minds.

Fact: According to Radiation watchdog 5G technology is safe

5G uses frequencies in the 30–300 gigahertz range. In the 30-300 gigahertz range, there is not enough energy to break chemical bonds or remove electrons when in contact with human tissue. According to the Australian Radiation Protection and Nuclear Safety Agency, even higher levels of human exposure pose no health risks.

Fact: The conspiracy theory about “plastic coffins” has long been circulating and it has even been linked to the Ebola virus. In fact, what is shown in the photos are not “plastic coffins,” but rather burial vaults that protect the coffin from water seepage and maintain level ground above. The Vantage Products Corporation offered the burial vaults for sale in the late 1990s and they have nothing to do either with CDC and COVID-19, or Bill Gates’ remarks of 2017. Speaking at the Munich Security Conference in February 2017, Bill Gates quoted epidemiologists as saying that a fast-moving airborne pathogen could kill more than 30 million people in less than a year.

Fabricated quote: ,,”All that we need is a right major crisis and nations will accept the new world order” David Rockfeeller

Fact: Misinterpretation of Rockefeller’s quote originates from his speech at the 1994 United Nations Awards Ceremony where Rockefeller spoke about the possibility of creating a peaceful and interdependent world order, however, he didn’t mention the necessity of the crisis.

Conspiracy theories about shadow, secret forces allegedly ruling the world have long existed with the conspiracy theory about establishment of the New World Order being one of them. The developments linked to it and the main characters were changing with years, but the content according to which full control would gradually be established on the minds and decisions of all inhabitants of the world remained unchanged.

The term itself (New World Order) first emerged in politics in the first half of the 20th century, when U.S. President Woodrow Wilson advocated for a new approach to avoid the world war and its devastating consequences and ensure a peaceful and orderly world. He viewed the New World Order just as such policy and diplomacy. Eventually, Wilson’s idea was realized and the international organization, League of Nations was established in 1920 to ensure collective security and solve conflicts through negotiations. However, the WWII could not be averted.  Winston Churchill also supported the establishment of the New World Order as well as joint solution of global problems following the WWII. The United Nations was initially created just based on this idea.

Later, conspiracy theorists appropriated the term and tailored it to different agendas at different times. There are a lot of works discussing various approaches of the establishment of the New World Order. William Carr, a Cold War-era Canadian conspiracy theorist, deemed the New World Order as a threat coming from the communists and the groups affiliated with them. During the same period, various actors or organizations (for example, The John Birch Society) attributed the establishment of the New World Order to the secret rule of bankers and neoliberals in both the United States and the USSR.

After the dissolution of the Soviet Union, the term was again voiced in politics, this time by George H.W. Bush. The U.S. President spoke about the establishment of the new political order following the disappearance of the Soviet Union. However, the term gradually lost its political significance. Pat Robertson’s The New World Order released in 1991 played a decisive role in this process. The book gained huge popularity. Its key idea was the world ruled behind the scenes which will eventually be ruled by the Anti-Christ. During the same period, conspiracy theorists chose “globalists” as their new target, considering them to be the main characters in the process of establishing the new order.

In 2013, Stephen O’Leary, a professor at the University of Southern California’s Annenberg School, spoke about the threat of viral spread of conspiracy theories and the need for developing critical thinking among people. The pandemic has made this threat even clearer, because besides global control, depopulation also takes an important place in the theory of the New World Order. As the virus took lives of many people, conspiracy theorists deemed the pandemic as pre-planned and dubbed it as the first steps towards establishment of the New World Order. At different times, Bill Gates, David Rockefeller, the Rothschild family and others were supposed to be standing behind the coronavirus outbreak.