When Were the Georgian Dream Flags Burned – Prior to the Elections or on Gavrilov’s Night? 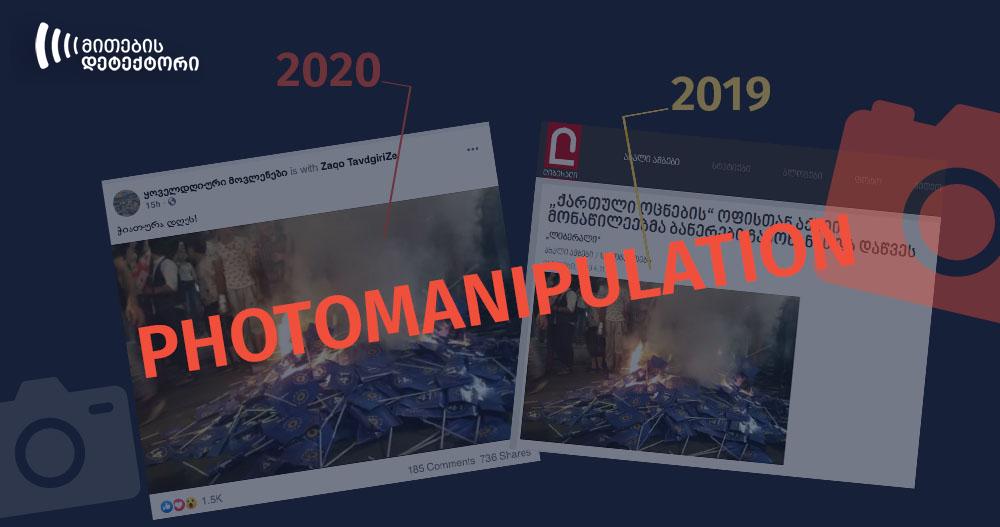 On October 25, 2020, a Facebook page „ყოველდღიური მოვლენები“ (Daily events) shared a photo with a caption: “Chiatura today!” The photo shows how the flags of Georgian Dream are being burned. The description and the visual side of the photo create a perception that the events are taking place now. The photo was last reported to have had up to 700 shares and 1,500 reactions. 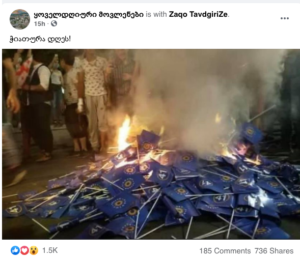 The post, shared by the Daily Events is a manipulation, as it was taken not in Chiatura, but rather in Tbilisi, on Rustaveli Avenue, and it was initially published on June 21, 2019 in relation to the so-called “Gavrilov’s Night” protests. Publishing a 2019 photo in a manipulative way during a pre-election period creates a perception that there is an ongoing anti-governmental protest in Chiatura.

The given photo was initially published on liberali.ge on June 21, 2019. According to the website, the photo shows a continuation of a protest demonstration that began on June 20 and served to express a discontent with a visit of a Russian delegation and the occupation.

Globalpress.ge published an identical shot, but from a different angle. Both shots show the same participants of the protest. The website mentions that, in fact, this event took place on Rustaveli Avenue. 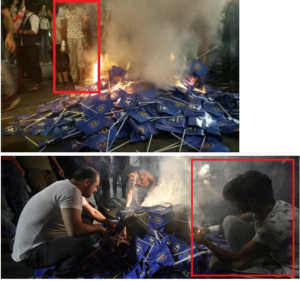 On June 20, 2019, the fact of Sergei Gavrilov, a Communist MP at the Russian Duma, taking the place of the Speaker of the Parliament of Georgia at a session of the Orthodox Inter-Parliamentary Assembly was followed by protests of the parliamentary opposition, on the one hand, and of the people gathered in front of the Parliament, on the other hand. After the protesters were dispersed through the use of force on the first day of the protests, anti-occupation demonstrations, called “სირცხვილია“ (Shame!) turned into permanent protests. The members of the protest require that their third demand be met – the Minister of Internal Affairs has to be removed from office due to dispersing the June 20 demonstration with the use of force.

Sharing in other groups

Apart from the Daily Events, the given photo has also been shared on various Facebook pages and groups. This included the “Group of United National Movement Supporters”, where it received up to 350 shares and a caption: “Chiatura today, the flags of the Georgian Dream Were Burned, Georgia is Waking Up!! Five more days to go until the victory.” Another group, „დუშეთი.ძალა ერთობაშია“ (Dusheti. Power in Unity) shared the given photo from this group precisely. 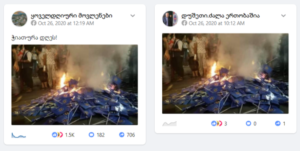 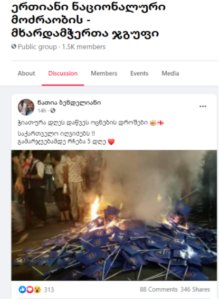 “Group of United National Movement Supporters”, which counts up to 1,500 members at the moment, openly indicates its political allegiance and goals. The group “Dusheti. Power in Unity”.

The page has indicated that it was created in 2018 for informative purposes, however, the widespread narratives and the context indicate that the page supports the United National Movement and actively shares anti-Georgian Dream materials.