What Was Wrong with the Accounting Done by Georgian March for Soros and the Public Defender? 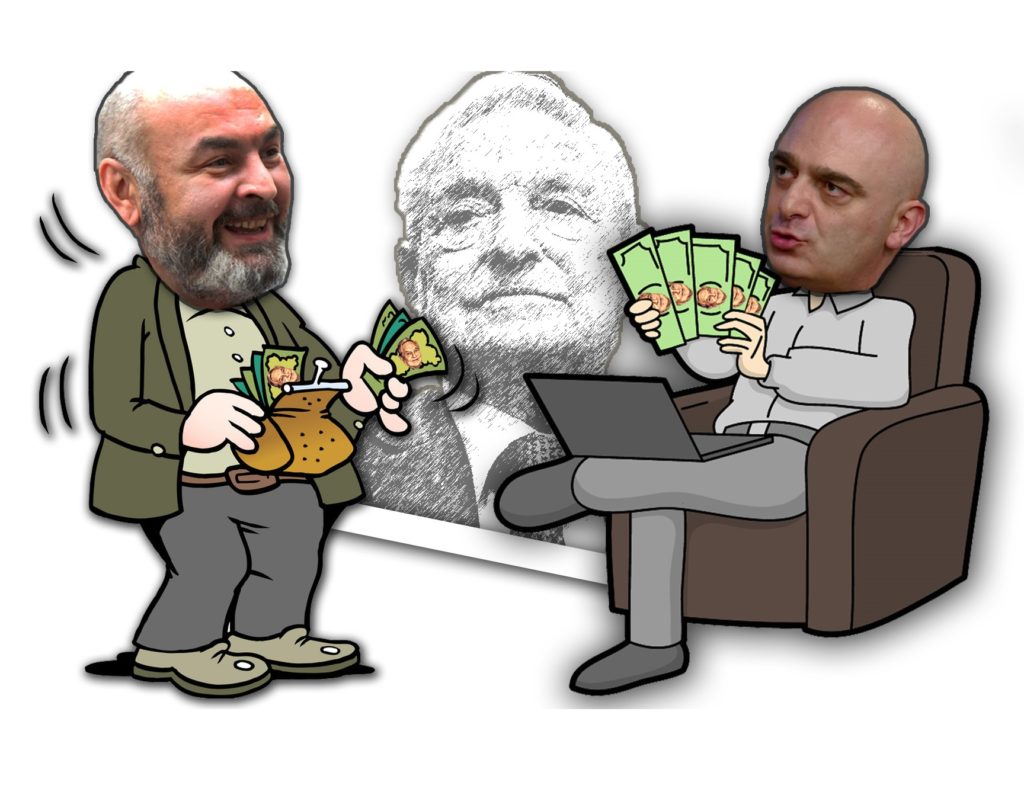 Georgian March, an anti-liberal political organization, continues its campaign against the Open Society Georgia Foundation (OSGF). Members of the Georgian March voiced two pieces of information regarding OSGF at Obiektivi TV: 1. Soros has allocated USD 4 million to fight Orthodox Christianity. 2. The Office of Public Defender of Georgia is a state institution and the likelihood of “Soros foundation” allocating funding or “bribing” it is dubious. Moreover, one of the leaders of the Georgian March, Sandro Bregadze, stated that they were addressing the Parliament of Georgia to outlaw funding non-governmental organizations (NGOs) by foreign states.

Sandro Bregadze, Georgian March: “Approximately a week ago, George Soros allocated quite a significant amount of money in order to open a new frontline to fight Orthodox Christianity. Our so-called NGOs are expecting approximately USD 4 million from that amount to open a new frontline. We will not allow it. Today, we have asked the parliament to ban funding NGOs from abroad and the activities of the Soros foundation, naturally.” (July 30, 2020)

Sandro Bregadze, Georgian March: “I was most touched by one fact – the Office of Public Defender is figuratively a state institution or organization that Soros has contributed GEL 160,000 to. Make no mistake – a private individual, George Soros has given GEL 160,000… The purpose includes human rights protection activities and so on, but of course [this is just a cover]. This is a simple act of bribing.” (August 2, 2020)

Irakli Shikhiashvili, Georgian March: “Our Office of Public Defender… is funded by some Hungarian Jew billionaire… Now explain to me, why should he have the possibility of spreading poison in our country and what purpose should it serve.” (August 9, 2020)

Reports disseminated by the Georgian March are disinformation. 1. OSGF has allocated USD 1 million, not USD 4 million, to fight the pandemic. It has nothing to do with the fight against Orthodox Christianity. 2. The Office of Public Ombudsman is not a state institution. It is an independent body that has the constitutional right to oversee the state and it gets funding from the OSGF to protect the rights of prisoners.

1. OSGF received an additional funding worth USD 1 million, not USD 4 million, to fight the COVID-19 pandemic, not Orthodox Christianity.

As the Open Society Foundation reports, in 2020, its Georgian office received an additional funding worth USD 1 million, not USD 4 million (as Bregadze believes), to alleviate the harm caused by COVID-19. From that amount, more than USD 800 thousand has already been allocated to various necessities between March and June. These included training hundreds of doctors in infection management, printing guidelines, creating free legal aid services for those dismissed from work, those without income, and those with credit liabilities, and several psychological aid services. Thousands of people in severe socio-economic conditions received direct aid, pupils were able to engage in online teaching, and local media in the regions received funding with the aim of informing the population.

Projects funded by the OSGF during the pandemic include providing 45 socially vulnerable pupils of senior classes with the Internet and computers, providing Mirashkhani village in Samtskhe-Javakheti with the

Internet, improving life quality of elderly that lack sufficient care, of palliative patients, and their family members during the COVID-19 pandemic etc. The complete list of activities carried out against the background of COVID-19 is available in a report by the Foundation, while the list of the funded projects by implementing organizations, initiative groups, and individuals is available on the website of the Foundation.

2. The Office of Public Defender is an independent, not a state body, and has the constitutional right to control the state and it gets funding from the OSGF to protect the rights of prisoners.

1. “1. Supervision of the protection of human rights within the territory of Georgia shall be exercised by the Public Defender of Georgia, who shall be elected for a term of 6 years by a majority of at least three fifths of the total number of the Members of Parliament. The same person shall not be elected as a Public Defender consecutively.”

Moreover, the Organic Law of Georgia on the Public Defender of Georgia does not prohibit receiving funding from donor organizations, nor does any such restriction exist for any other public institution.

Various international organizations have provided funding to the Public Defender of Georgia with the aim of protecting human rights, including the EU, the USAID, and the Open Society Foundation.

As the Open Society Foundation reports, in 2020, they funded a project of the Public Defender of Georgia that aimed to strengthen protection against torture and improper treatment in closed institutions and to oversee these institutions to decrease the instances of improper treatment of prisoners, pretrial detainees, and patients.

The calls for restricting activities of NGOs and international organizations, as well as their funding, have been a part of Russianand anti-Western propaganda and have been voiced by various actors. This approach is in accordance with the 2015 National Security Strategy of Russia. The following actors are mentioned in the document as main threats to the national and public security:

“… foreign and international nongovernmental organizations, and financial and economic structures, and also individuals, focused on destroying the unity and territorial integrity of the Russian Federation, destabilizing the domestic political and social situation — including through inciting ‘color revolutions’ — and destroying traditional Russian religious and moral values”.

About the Georgian March

Emergence of an ultra-nationalist group, Georgian March, is connected to anti-migrant demonstrations in Spring 2017. Leaders of the March stand out with xenophobic and homophobic statements. One of the founders of the Georgian March is a former Deputy Minister and a former member of the Georgian Dream – Sandro Bregadze. In 2020, the group stated that it would reform itself into a political party and participate in the upcoming elections.